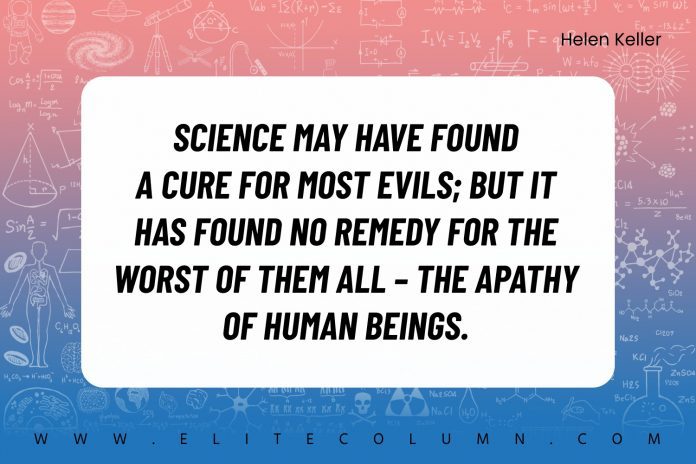 1. “The cure for a fallacious argument is a better argument, not the suppression of ideas.” – Carl Sagan

2. “Two things awe me most, the starry sky above me and the moral law within me.” – Immanuel Kant

3. “Science may have found a cure for most evils; but it has found no remedy for the worst of them all – the apathy of human beings.” – Helen Keller

4. “God is dead, God remains dead, and we have killed him.” – Friedrich Nietzsche

5. “The beauty of a living thing is not the atoms that go into it, but the way those atoms are put together.” – Carl Sagan

6. “We are stuck with technology when what we really want is just stuff that works.” – Douglas Adams

7. “Life would be tragic if it weren’t funny.” – Stephen Hawking

8. “Astronomy compels the soul to look upwards and leads us from this world to another.” – Plato

9. “In nature we never see anything isolated, but everything in connection with something else which is before it, beside it, under it and over it.” – Johann Wolfgang von Goethe

10. “The notion that science and spirituality are somehow mutually exclusive does a disservice to both.” – Carl Sagan

11. “People like it when they understand something that they previously thought they couldn’t understand. It’s a sense of empowerment.” – Neil deGrasse Tyson

13. “All civilizations become either spacefaring or extinct.” – Carl Sagan

14. “By far the best proof is experience.” – Francis Bacon

16. “I never guess. It is a shocking habit destructive to the logical faculty.” – Arthur Conan Doyle

17. “Nature and nature’s laws lay hid in the night. God said, Let Newton be! and all was light!” – Alexander Pope

18. “My view is that if your philosophy is not unsettled daily then you are blind to all the universe has to offer.” – Neil deGrasse Tyson

20. “For your own safety, do not ever tell an astrophysicist, I hope all your stars are twinkling.” – Neil deGrasse Tyson

21. “Mathematics is the language with which God has written the universe.” – Galileo Galilei

22. “Real science can be far stranger than science fiction and much more satisfying.” – Stephen Hawking

23. “Nothing exists except atoms and empty space; everything else is opinion.” – Democritus

24. “Science knows no country, because knowledge belongs to humanity, and is the torch which illuminates the world.” – Louis Pasteur

25. “Science is a way of thinking much more than it is a body of knowledge.” – Carl Sagan

29. “Mathematics is the key and door to the sciences.” – Galileo Galilei

31. “Research is formalized curiosity. It is poking and prying with a purpose.” – Zora Neale Hurston

32. “One thing in life is for certain, the more profoundly baffled you have been in your life, the more open your mind becomes to new ideas.” – Neil deGrasse Tyson

33. “Science, my lad, is made up of mistakes, but they are mistakes which it is useful to make, because they lead little by little to the truth.” – Jules Verne

35. “The test of a first-rate intelligence is the ability to hold two opposed ideas in mind at the same time and still retain the ability to function.” – F. Scott Fitzgerald

Thanks for checking out the best Science Quotes. Feel free to share the quotes with your friends. Leave a comment below and which are your favourite Science Quotes ?