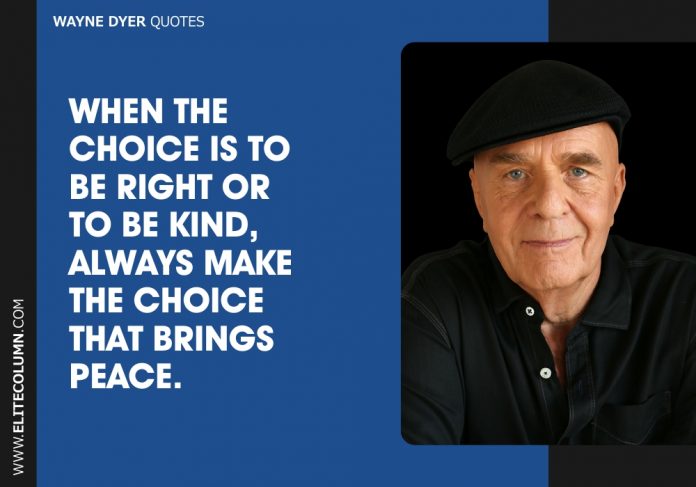 Wayne Dyer was an American self-help author and a motivational speaker. Your Erroneous Zones, published in 1976, is one of his best-selling books of all time, with an estimated 35 million copies sold to date. After this father left, he spent the first ten years of his life in an orphanage. He built on his success with lecture tours, a series of audiotapes, PBS programs, and regular publication of new books. According to him, guilt is an unhealthy immobilization in the present due to actions taken in the past. EliteColumn provides some of the most inspirational Wayne Dyer quotes. 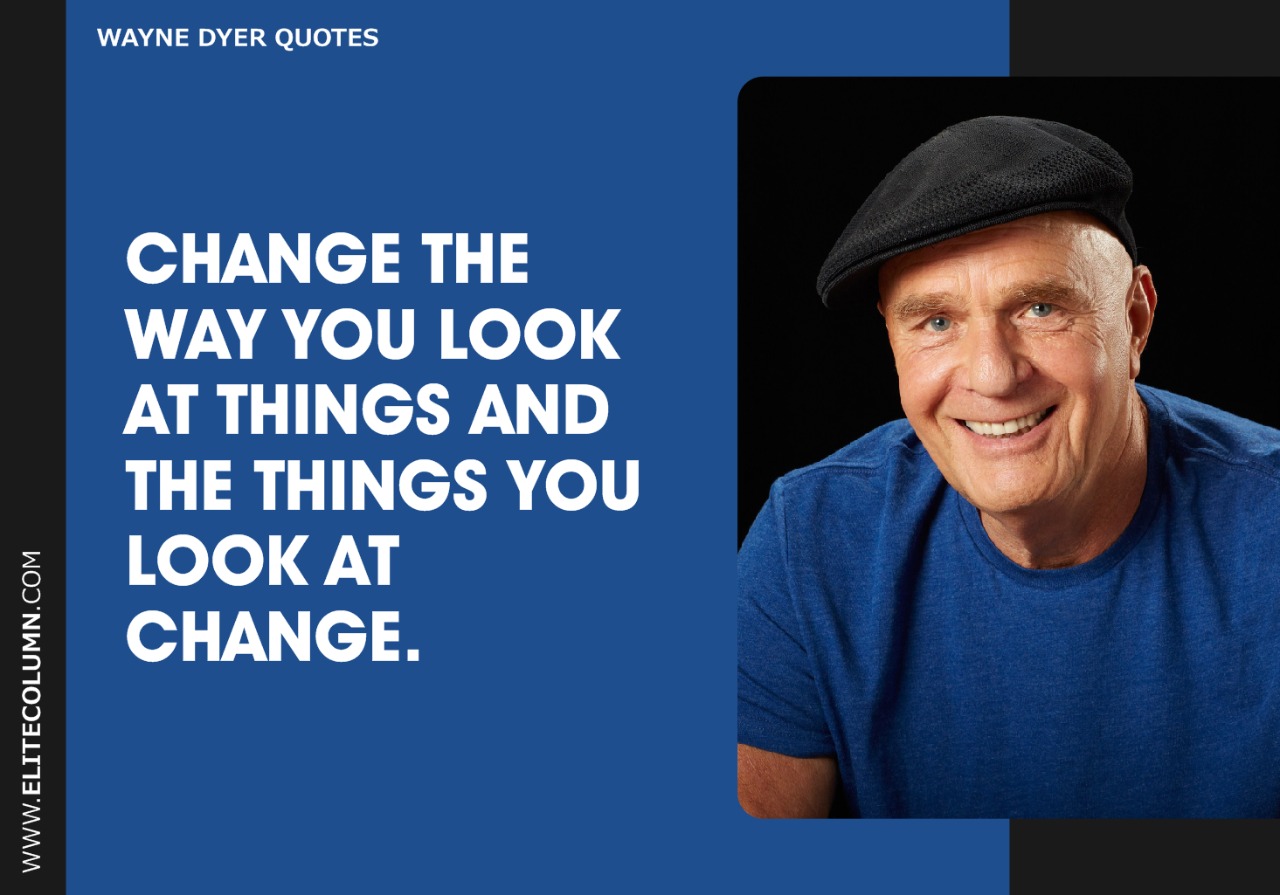 3. “The only limits you have are the limits you believe.” – Wayne Dyer 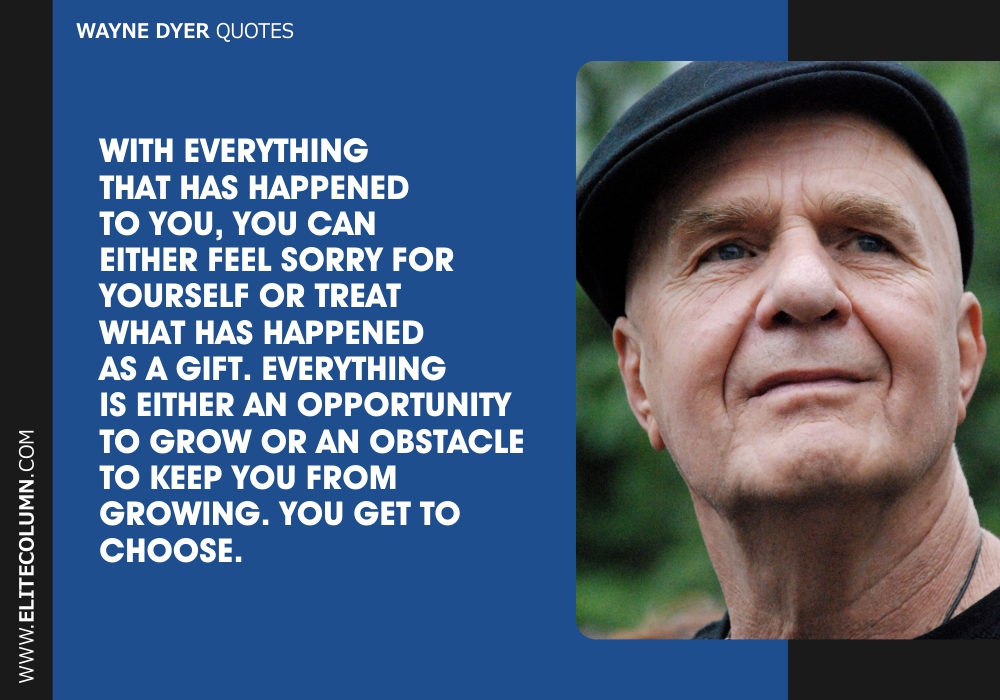 6. “With everything that has happened to you, you can either feel sorry for yourself or treat what has happened as a gift. Everything is either an opportunity to grow or an obstacle to keep you from growing. You get to choose.” – Wayne Dyer

7. “Keep reminding yourself: I get what I think about, whether I want it or not.” – Wayne Dyer

8. “You are not stuck where you are unless you decide to be.” – Wayne Dyer

9. “Practice being the kind of person you wish to attract.” – Wayne Dyer 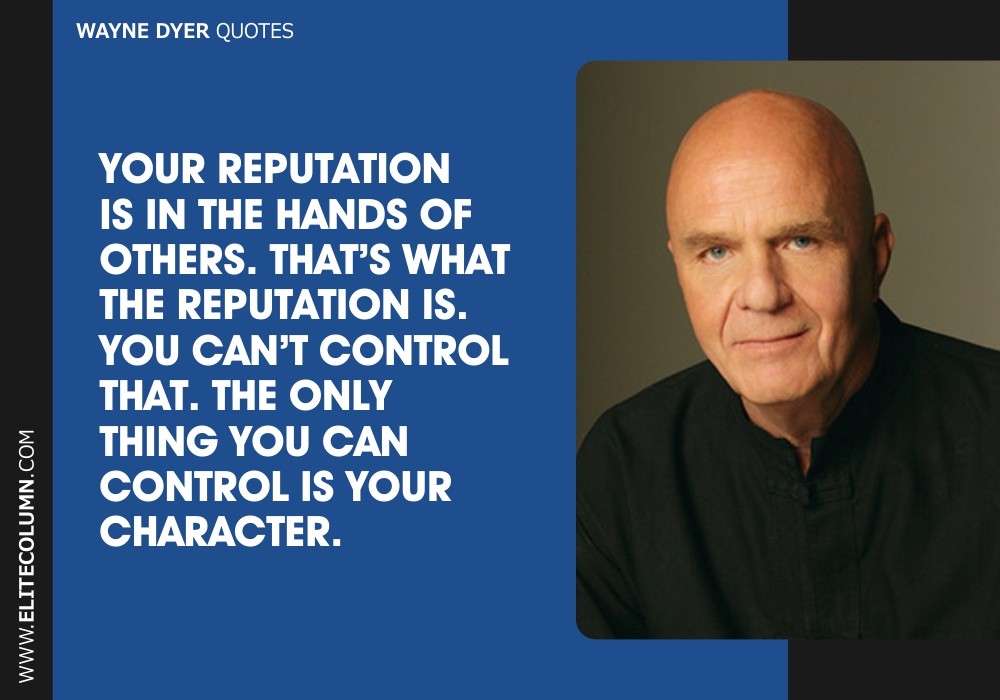 12. “Your reputation is in the hands of others. That’s what the reputation is. You can’t control that. The only thing you can control is your character.” – Wayne Dyer

16. “Create a knowing within that banishes all doubt. Live from your highest self and respect your eternal divinity.” – Wayne Dyer 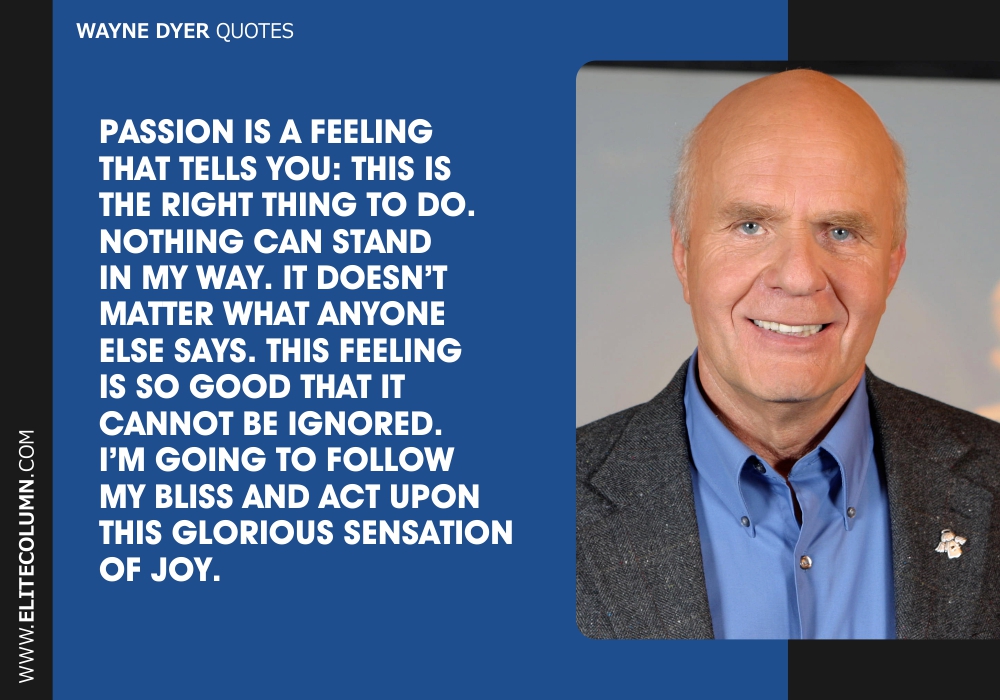 17. “Passion is a feeling that tells you: this is the right thing to do. Nothing can stand in my way. It doesn’t matter what anyone else says. This feeling is so good that it cannot be ignored. I’m going to follow my bliss and act upon this glorious sensation of joy.” – Wayne Dyer

20. “Every moment of our existence holds and infinite number of possibilities.” – Wayne Dyer 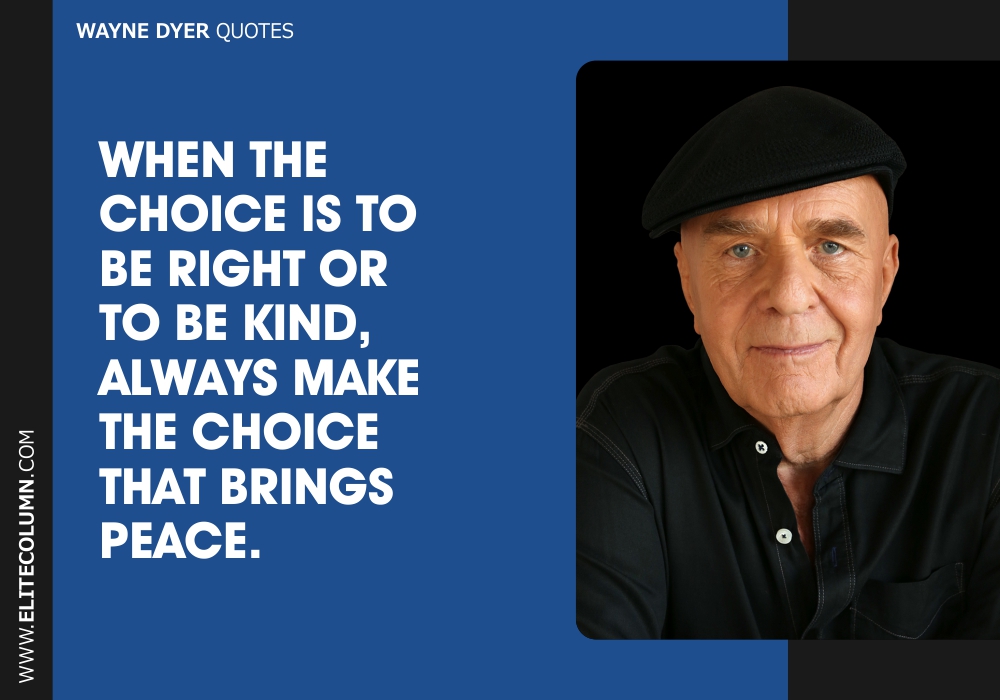 23. “When the choice is to be right or to be kind, always make the choice that brings peace.” – Wayne Dyer

24. “The more you see yourself as what you’d like to become, and act as if what you want is already there, the more you’ll activate those dormant forces that will collaborate to transform your dream into your reality.” – Wayne Dyer

25. “The state of your life is nothing more than a reflection of your state of mind.” – Wayne Dyer

26. “I have absolutely no limits on what I intend to create.” – Wayne Dyer 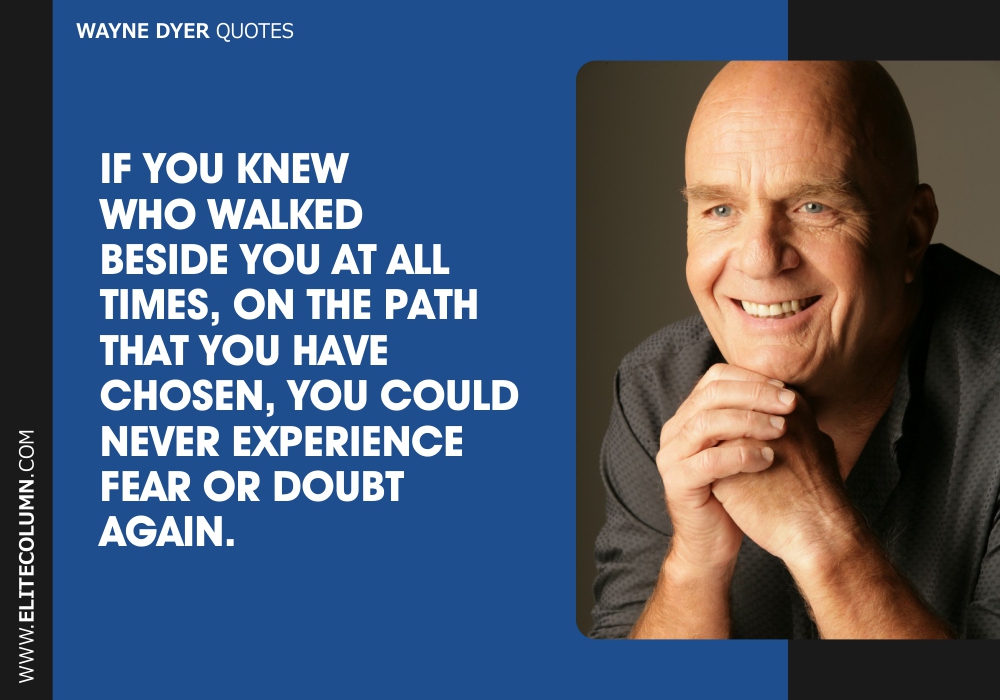 29. “If you knew who walked beside you at all times, on the path that you have chosen, you could never experience fear or doubt again.” – Wayne Dyer

31. “You are important enough to ask, and you are blessed enough to receive back.” – Wayne Dyer

33. “Banish doubt. When doubt is banished, abundance flourishes and anything is possible.” – Wayne Dyer

34. “Doing what you love is the cornerstone of having abundance in your life.” – Wayne Dyer 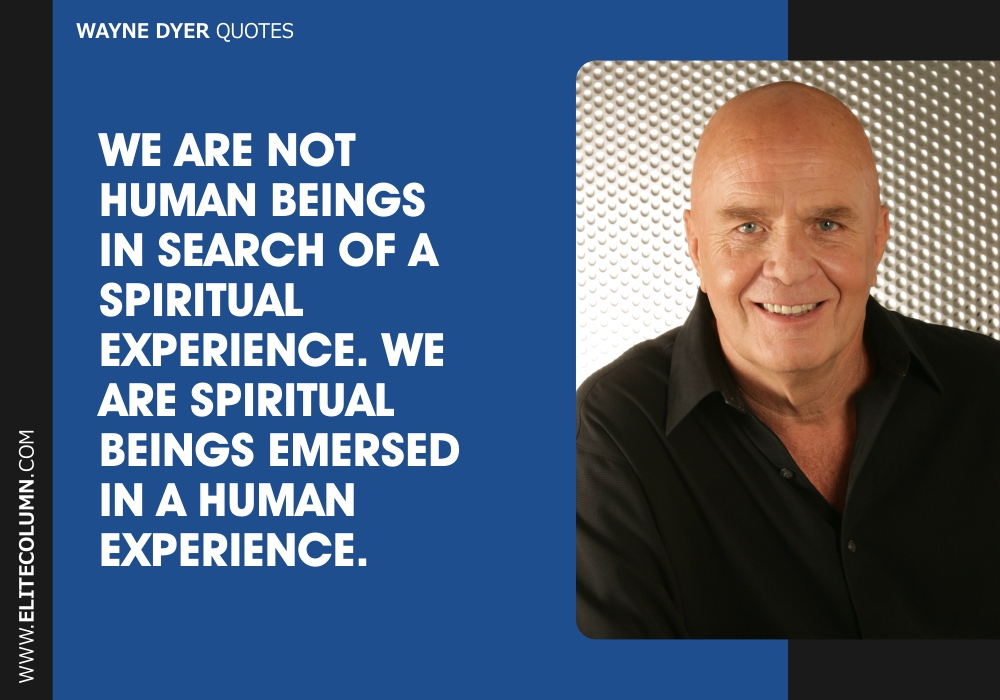 35. “We are not human beings in search of a spiritual experience. We are spiritual beings emersed in a human experience.” – Wayne Dyer

36. “Miracles come in moments. Be ready and willing.” – Wayne Dyer

37. “A mind at peace, a mind centered and not focused on harming others , is stronger than any physical force in the universe.” – Wayne Dyer

38. “Our lives are the sum total of the choices we have made.” – Wayne Dyer

40. “Anything you really want, you can attain, if you really go after it.” – Wayne Dyer 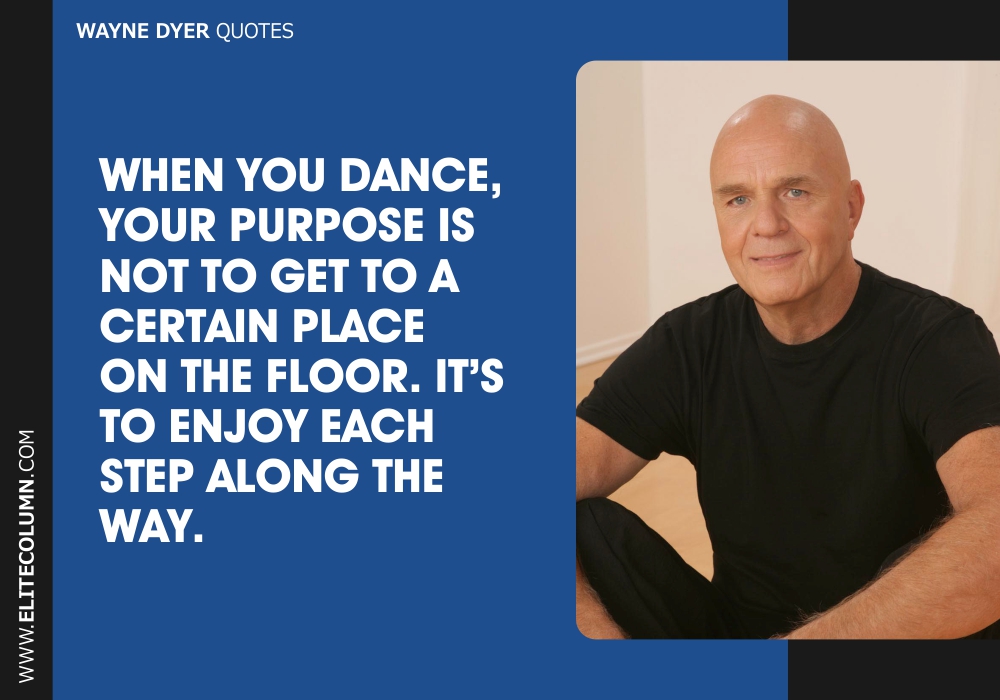 41. “When you dance, your purpose is not to get to a certain place on the floor. It’s to enjoy each step along the way.” – Wayne Dyer

42. “Upon awakening, let the words thank you flow from your lips, for this will remind you to begin your day with gratitude and compassion.” – Wayne Dyer

43. “Love is co-operation rather than competition.” – Wayne Dyer

44. “You cannot be lonely if you like the person you’re alone with.” – Wayne Dyer 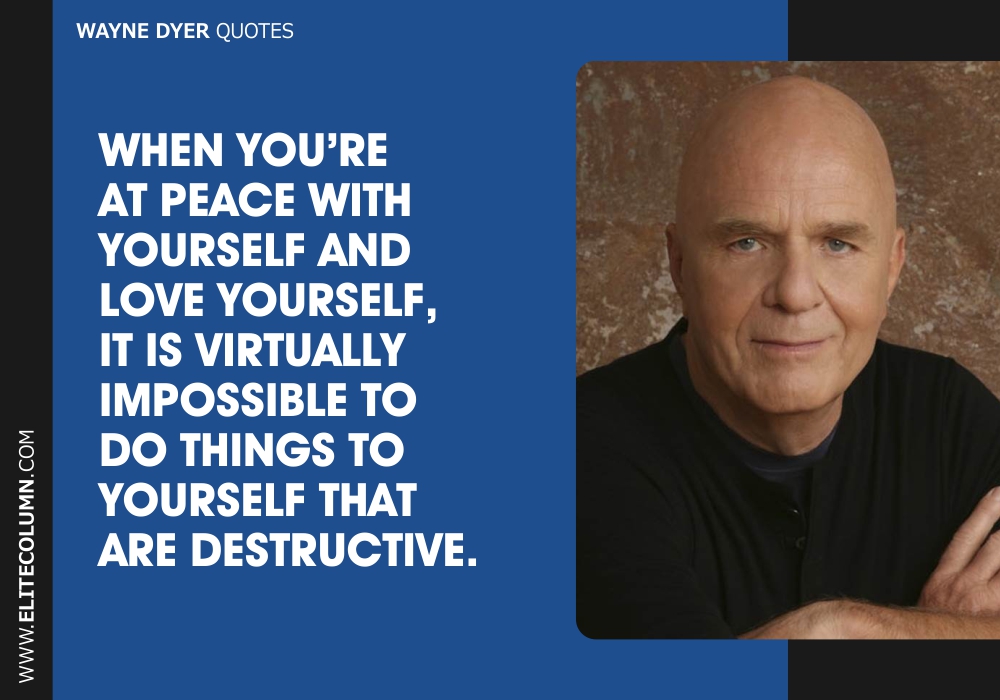 45. “When you’re at peace with yourself and love yourself, it is virtually impossible to do things to yourself that are destructive.” – Wayne Dyer

47. “When you have the choice between being right and being kind just choose kind.” – Wayne Dyer

48. “Here is an affirmation for today: I feel passionately about my life, and this passion fills me with excitement and energy!” – Wayne Dyer

49. “Be miserable. Or motivate yourself. Whatever has to be done, it’s always your choice.” – Wayne Dyer 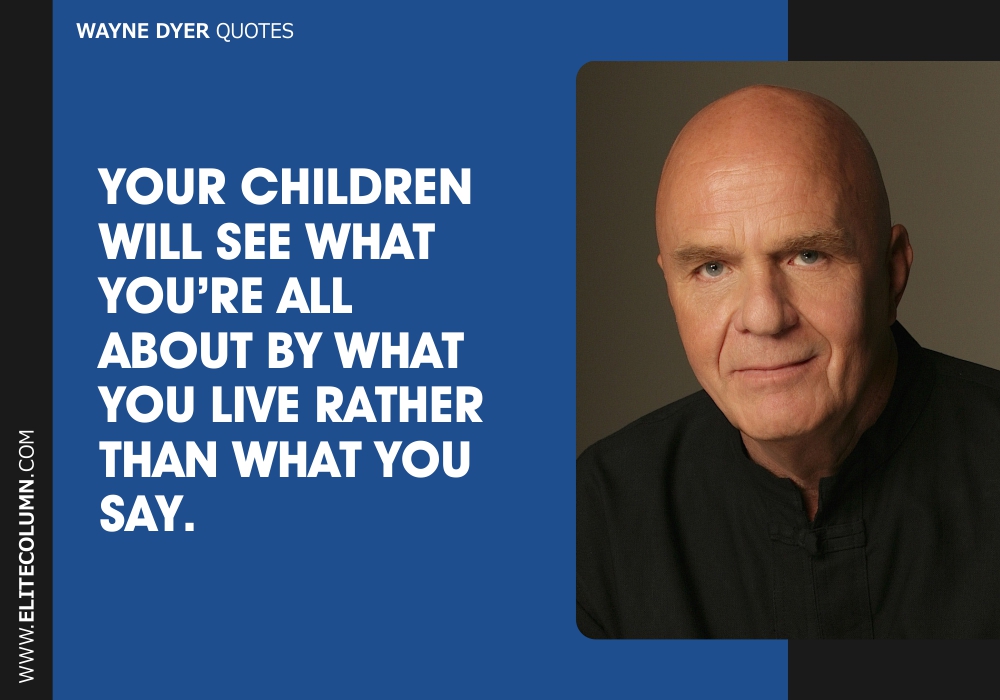 50. “Your children will see what you’re all about by what you live rather than what you say.” – Wayne Dyer

51. “Begin to see yourself as a soul with a body rather than a body with a soul.” – Wayne Dyer

53. “When you judge another, you do not define them, you define yourself.” – Wayne Dyer 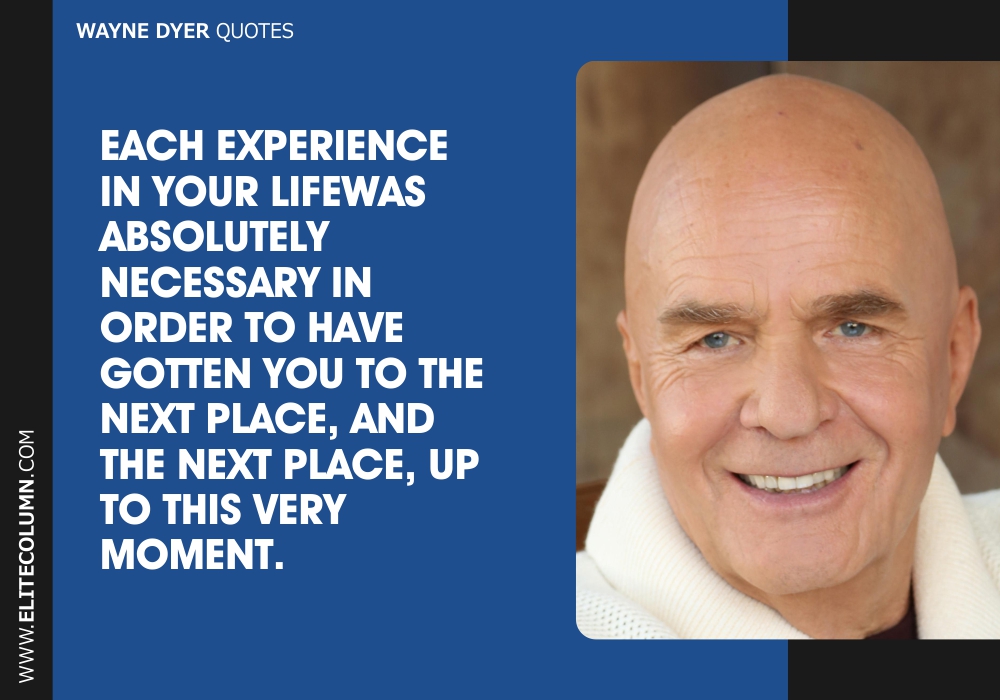 57. “Everything is perfect in the universe – even your desire to improve it.” – Wayne Dyer

58. “You have everything you need for complete peace and total happiness right now.” – Wayne Dyer

59. “There is no stress in the world, only people thinking stressful thoughts.” – Wayne Dyer

60. “Circumstances do not make a man, they reveal him.” – Wayne Dyer