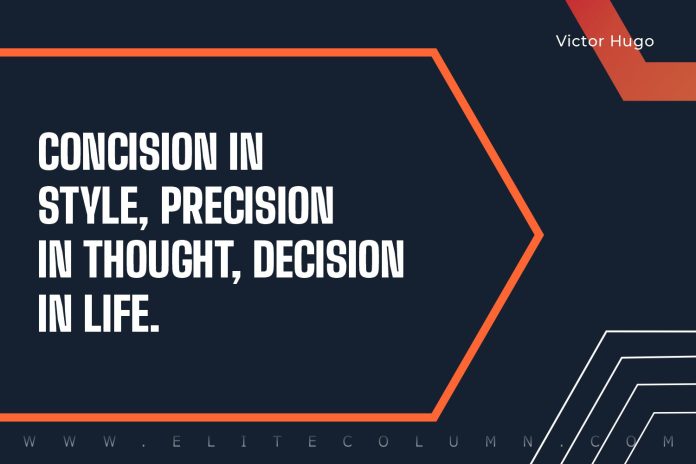 1. “The brutalities of progress are called revolutions. When they are over we realize this: that the human race has been roughly handled, but that it has advanced.” – Victor Hugo

2. “I am an intelligent river which has reflected successively all the banks before which it has flowed by meditating only on the images offered by those changing shores.” – Victor Hugo

3. “Short as life is, we make it still shorter by the careless waste of time.” – Victor Hugo

4. “He, who every morning plans the transactions of the day, and follows that plan, carries a thread that will guide him through a labyrinth of the most busy life.” – Victor Hugo

5. “It is from books that wise people derive consolation in the troubles of life.” – Victor Hugo

7. “Have courage for the great sorrows of life and patience for the small ones; and when you have laboriously accomplished your daily task, go to sleep in peace.” – Victor Hugo

8. “Each man should frame life so that at some future hour fact and his dreaming meet.” – Victor Hugo

10. “Life is the flower for which love is the honey.” – Victor Hugo

11. “The most powerful symptom of love is a tenderness which becomes at times almost insupportable.” – Victor Hugo

12. “The first symptom of love in a young man is timidity; in a girl boldness.” – Victor Hugo

13. “Try as you will, you cannot annihilate that eternal relic of the human heart, love.” – Victor Hugo

14. “There are fathers who do not love their children; there is no grandfather who does not adore his grandson.” – Victor Hugo

17. “I love all men who think, even those who think otherwise than myself.” – Victor Hugo

18. “Love is a portion of the soul itself, and it is of the same nature as the celestial breathing of the atmosphere of paradise.” – Victor Hugo

19. “The learned man knows that he is ignorant.” – Victor Hugo

20. “What would be ugly in a garden constitutes beauty in a mountain.” – Victor Hugo

22. “Great perils have this beauty, that they bring to light the fraternity of strangers.” – Victor Hugo

23. “I am a soul. I know well that what I shall render up to the grave is not myself. That which is myself will go elsewhere. Earth, thou art not my abyss!” – Victor Hugo

24. “Freedom in art, freedom in society, this is the double goal towards which all consistent and logical minds must strive.” – Victor Hugo

26. “To be perfectly happy it does not suffice to possess happiness, it is necessary to have deserved it.” – Victor Hugo

27. “Doing nothing is happiness for children and misery for old men.” – Victor Hugo

28. “Life’s greatest happiness is to be convinced we are loved.” – Victor Hugo

29. “I don’t mind what Congress does, as long as they don’t do it in the streets and frighten the horses.” – Victor Hugo

30. “A man is not idle because he is absorbed in thought. There is a visible labor and there is an invisible labor.” – Victor Hugo

31. “Civil war? What does that mean? Is there any foreign war? Isn’t every war fought between men, between brothers?” – Victor Hugo

32. “Sublime upon sublime scarcely presents a contrast, and we need a little rest from everything, even the beautiful.” – Victor Hugo

33. “As a means of contrast with the sublime, the grotesque is, in our view, the richest source that nature can offer.” – Victor Hugo

34. “Well, for us, in history where goodness is a rare pearl, he who was good almost takes precedence over he who was great.” – Victor Hugo

35. “Mankind is not a circle with a single center but an ellipse with two focal points of which facts are one and ideas the other.” – Victor Hugo

36. “Hell is an outrage on humanity. When you tell me that your deity made you in his image, I reply that he must have been very ugly.” – Victor Hugo

37. “The little people must be sacred to the big ones, and it is from the rights of the weak that the duty of the strong is comprised.” – Victor Hugo

38. “Amnesty is as good for those who give it as for those who receive it. It has the admirable quality of bestowing mercy on both sides.” – Victor Hugo

40. “To give thanks in solitude is enough. Thanksgiving has wings and goes where it must go. Your prayer knows much more about it than you do.” – Victor Hugo

42. “The omnipotence of evil has never resulted in anything but fruitless efforts. Our thoughts always escape from whoever tries to smother them.” – Victor Hugo

43. “Be like the bird who, pausing in her flight awhile on boughs too slight, feels them give way beneath her, and yet sings, knowing she hath wings.” – Victor Hugo

44. “Society is a republic. When an individual tries to lift themselves above others, they are dragged down by the mass, either by ridicule or slander.” – Victor Hugo

45. “Architecture has recorded the great ideas of the human race. Not only every religious symbol, but every human thought has its page in that vast book.” – Victor Hugo

47. “The drama is complete poetry. The ode and the epic contain it only in germ; it contains both of them in a state of high development, and epitomizes both.” – Victor Hugo

49. “Smallness in a great man seems smaller by its disproportion with all the rest.” – Victor Hugo