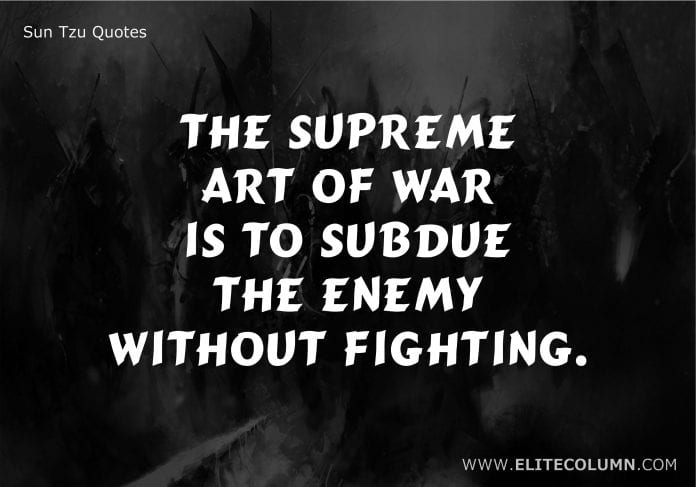 Sun Tzu was a Chinese general, military strategist, writer, and philosopher who lived in the Eastern Zhou period of ancient China. He is the original author of ‘The Art of The War’, a widely influential work of military strategy that has affected both Western and East Asian philosophy and military thinking.  EliteColumn brings you the 11 hand-picked Sun Tzu quotes from the ancient book for your inspiration. 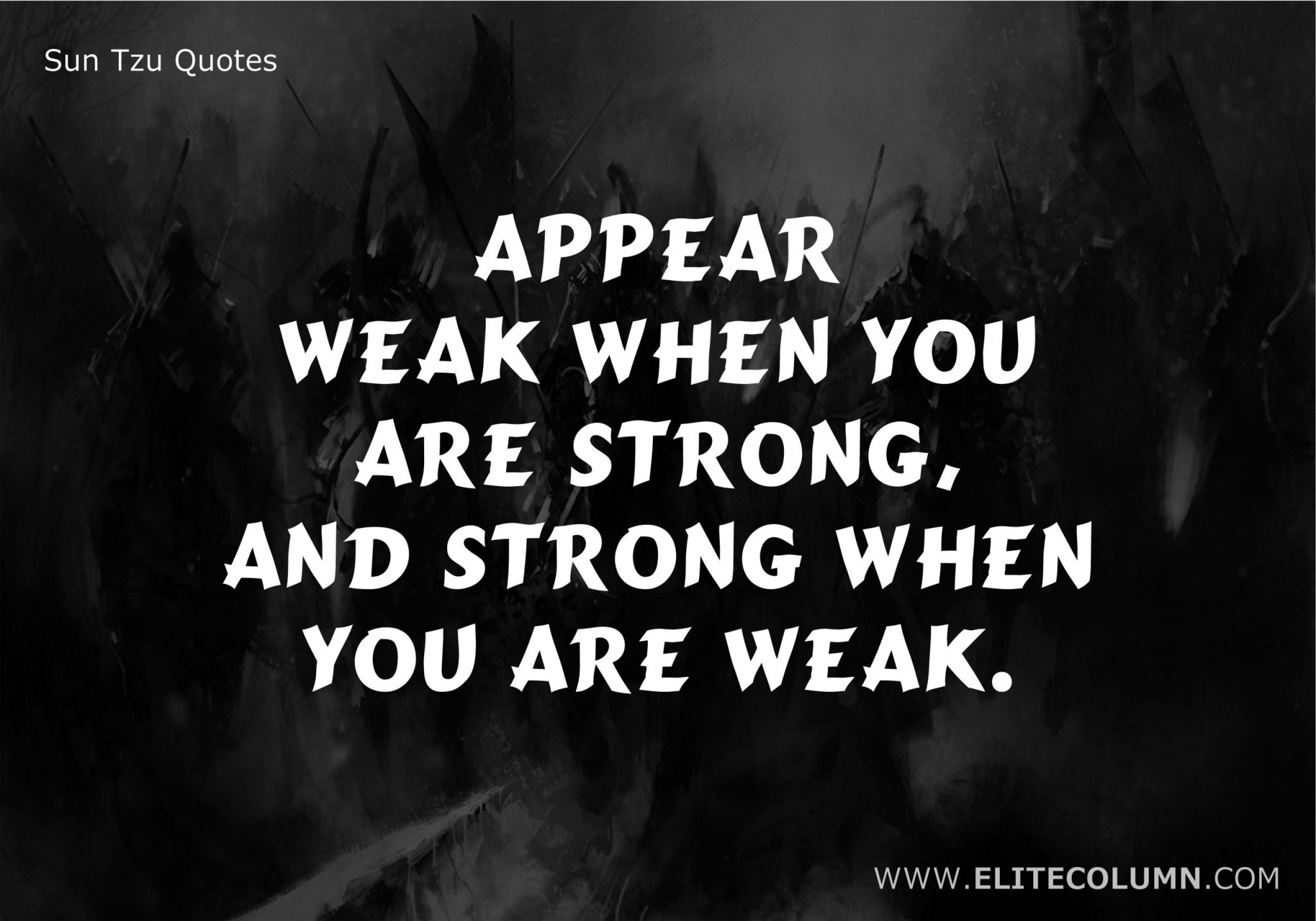 2. “Know thy self, know thy enemy. A thousand battles, a thousand victories.” – Sun Tzu

3. “Strategy without tactics is the slowest route to victory. Tactics without strategy is the noise before defeat.” – Sun Tzu

4. “Do not engage an enemy more powerful than you. And if it is unavoidable and you do have to engage, then make sure you engage it on your terms, not on your enemy’s terms.” – Sun Tzu

5. “If the mind is willing, the flesh could go on and on without many things.” – Sun Tzu

6. “Even the finest sword plunged into salt water will eventually rust.” – Sun Tzu 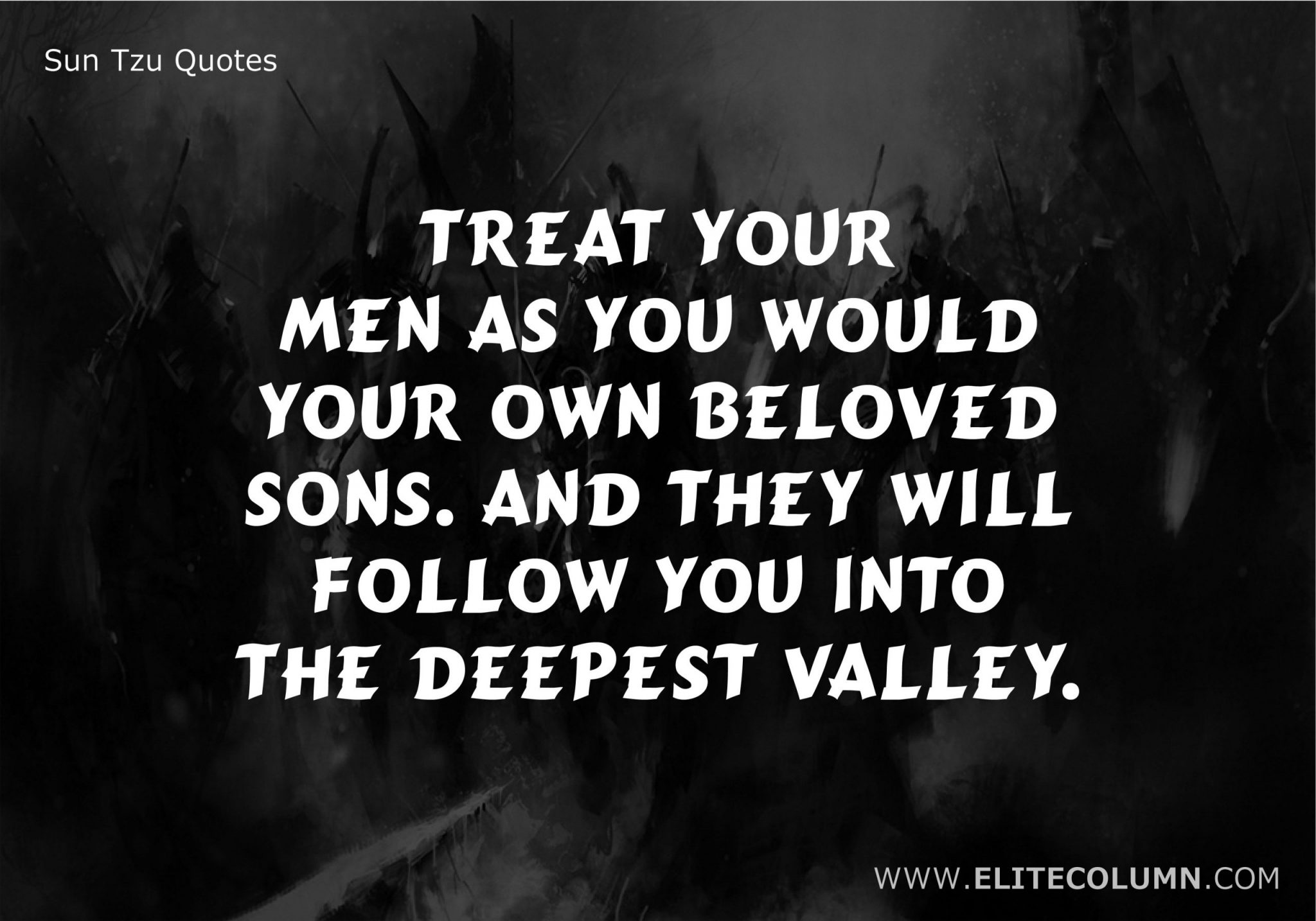 7. “Treat your men as you would your own beloved sons. And they will follow you into the deepest valley.” – Sun Tzu

8. “A wise general makes a point of foraging of the enemy.” – Sun Tzu

9. ”The good fighters of old first put themselves beyond the possibility of defeat, and then waited for an opportunity of defeating the enemy.” – Sun Tzu

11. “There is no instance of a nation benefiting from prolonged warfare.” – Sun Tzu

12. “Opportunities multiply as they are seized.” – Sun Tzu 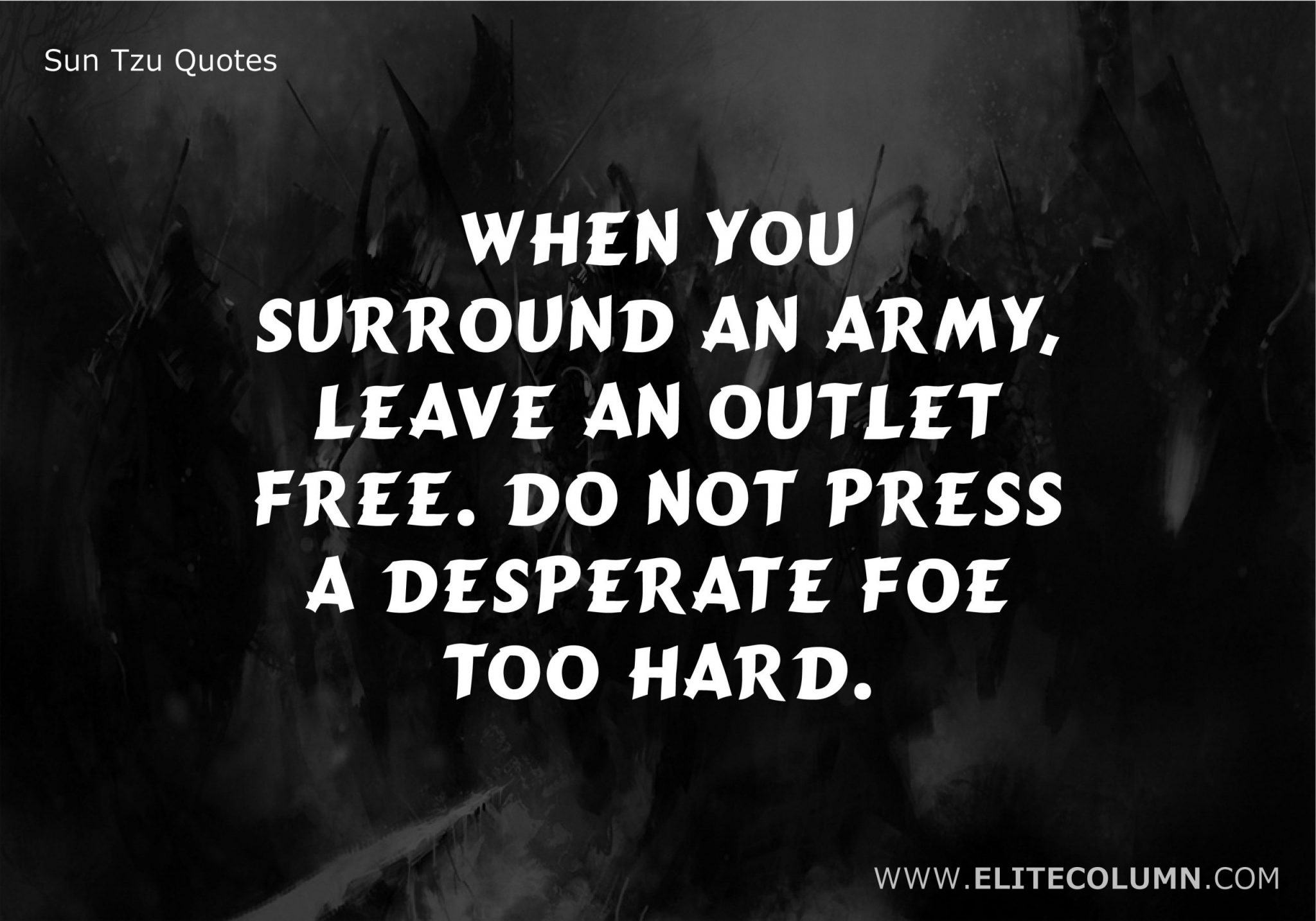 13. “When you surround an army, leave an outlet free. Do not press a desperate foe too hard.” – Sun Tzu

16. “The skillful employer of men will employ the wise man, the brave man, the covetous man, and the stupid man.” – Sun Tzu

17. “For them to perceive the advantage of defeating the enemy, they must also have their rewards.” – Sun Tzu

18. “When the enemy is relaxed, make them toil. When full, starve them. When settled, make them move.” – Sun Tzu 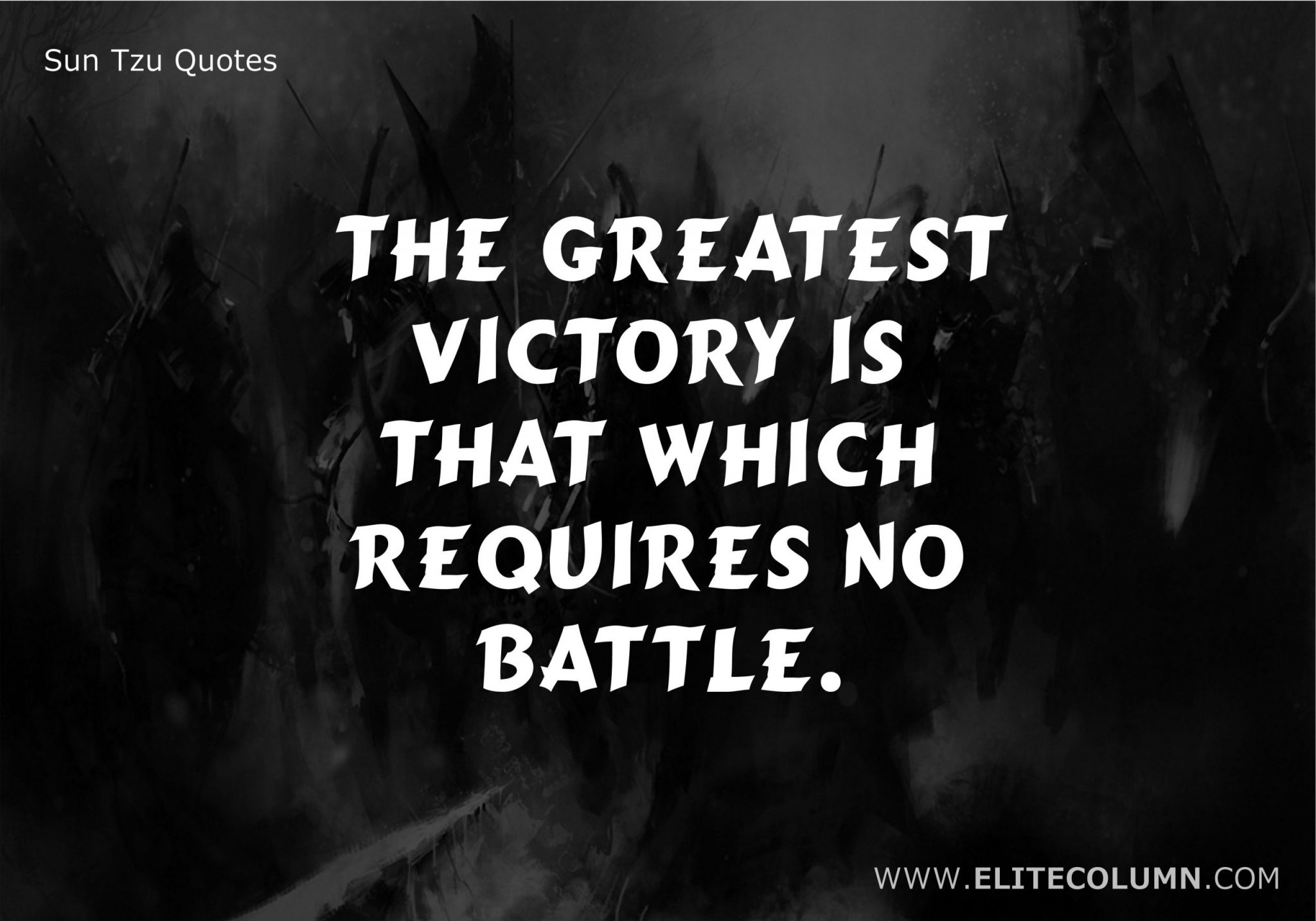 19. “The greatest victory is that which requires no battle.” – Sun Tzu

21. “Keep your friends close, your enemies even closer.” – Sun Tzu

22. “The quality of decision is like the well-timed swoop of a falcon which enables it to strike and destroy its victim.” – Sun Tzu

23. “It is more important to out-think your enemy, than to outfight him” – Sun Tzu

24. “Convince your enemy that he will gain very little by attacking you; this will diminish his enthusiasm.” – Sun Tzu 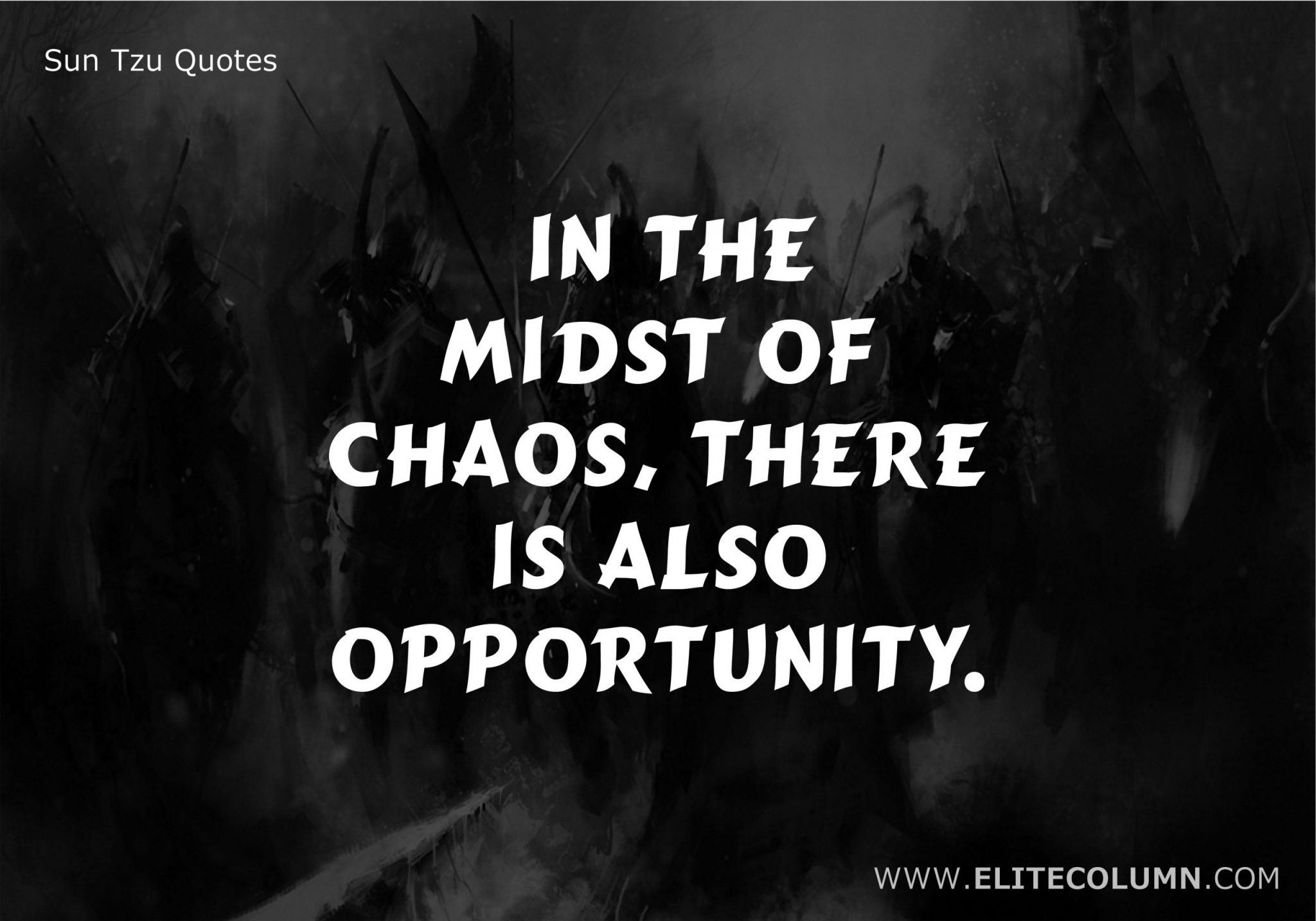 26. “There is no instance of a country having benefited from prolonged warfare.” – Sun Tzu

28. “Build your opponent a golden bridge to retreat across.” – Sun Tzu

29. “Energy may be likened to the bending of a crossbow; decision, to the releasing of the trigger.” – Sun Tzu 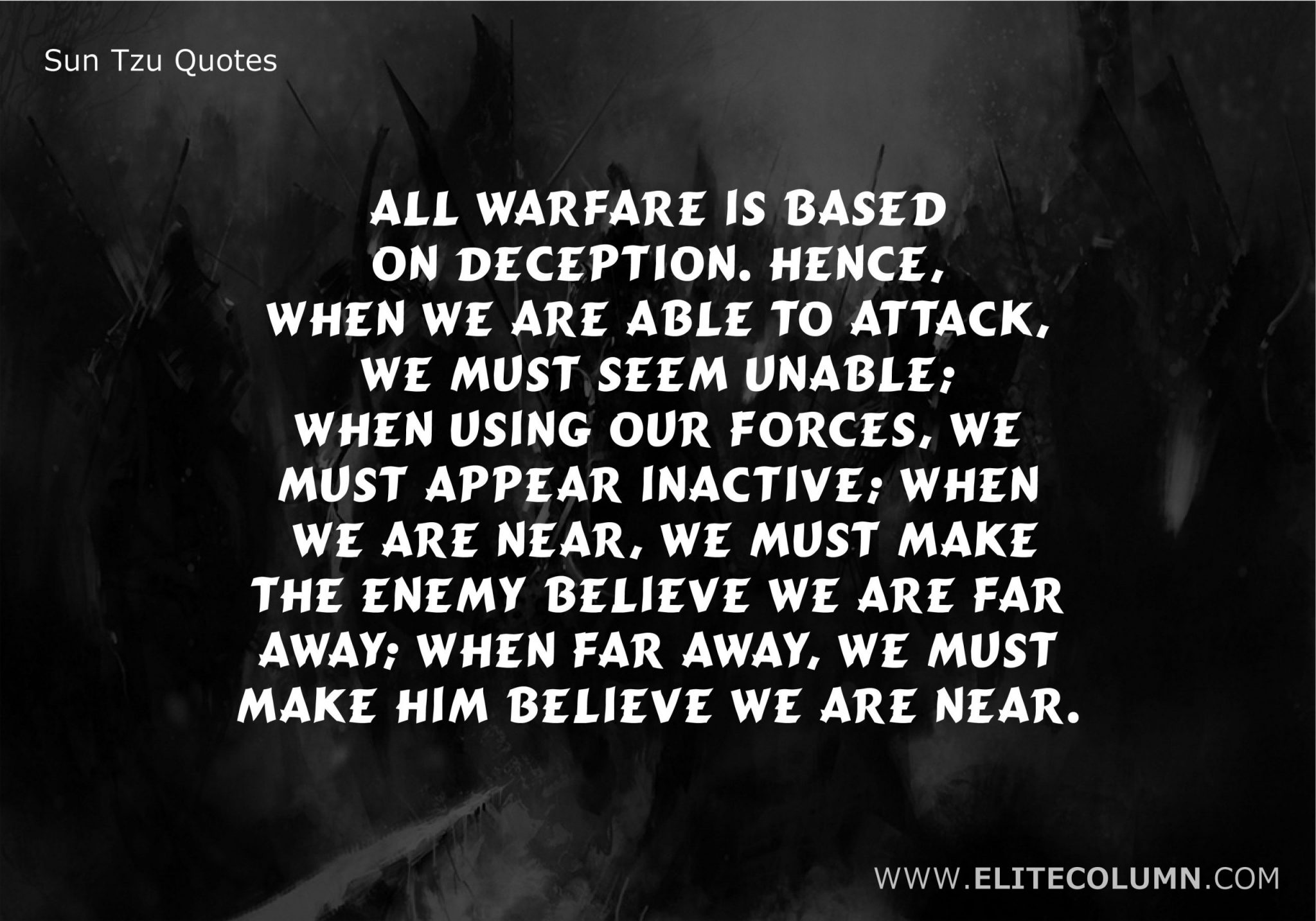 32. “The peak efficiency of knowledge and strategy is to make conflict unnecessary.” – Sun Tzu

33. “He will win who, prepared himself, waits to take the enemy unprepared.” – Sun Tzu

34. “All men can see these tactics whereby I conquer, but what none can see is the strategy out of which victory is evolved.” – Sun Tzu

35. “Concentrate your energy and hoard your strength.” – Sun Tzu

36. “The opportunity of defeating the enemy is provided by the enemy himself.” – Sun Tzu 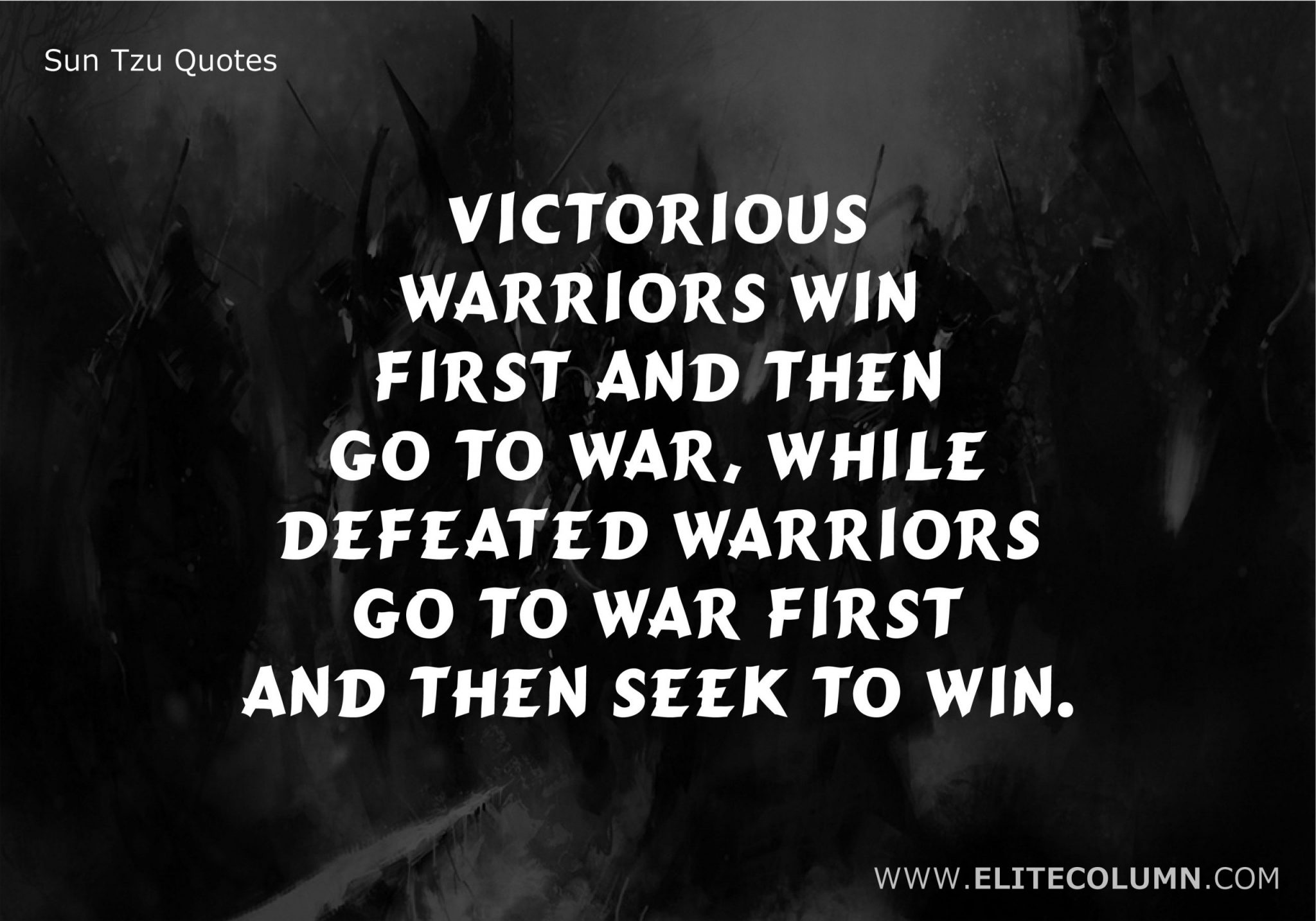 38. “If ignorant both of your enemy and yourself, you are certain to be in peril.” – Sun Tzu

40. “The art of giving orders is not to try to rectify the minor blunders and not to be swayed by petty doubts.” – Sun Tzu

41. “The line between disorder and order lies in logistics.” – Sun Tzu

42. “If your opponent is of choleric temper, seek to irritate him. Pretend to be weak, that he may grow arrogant.” – Sun Tzu 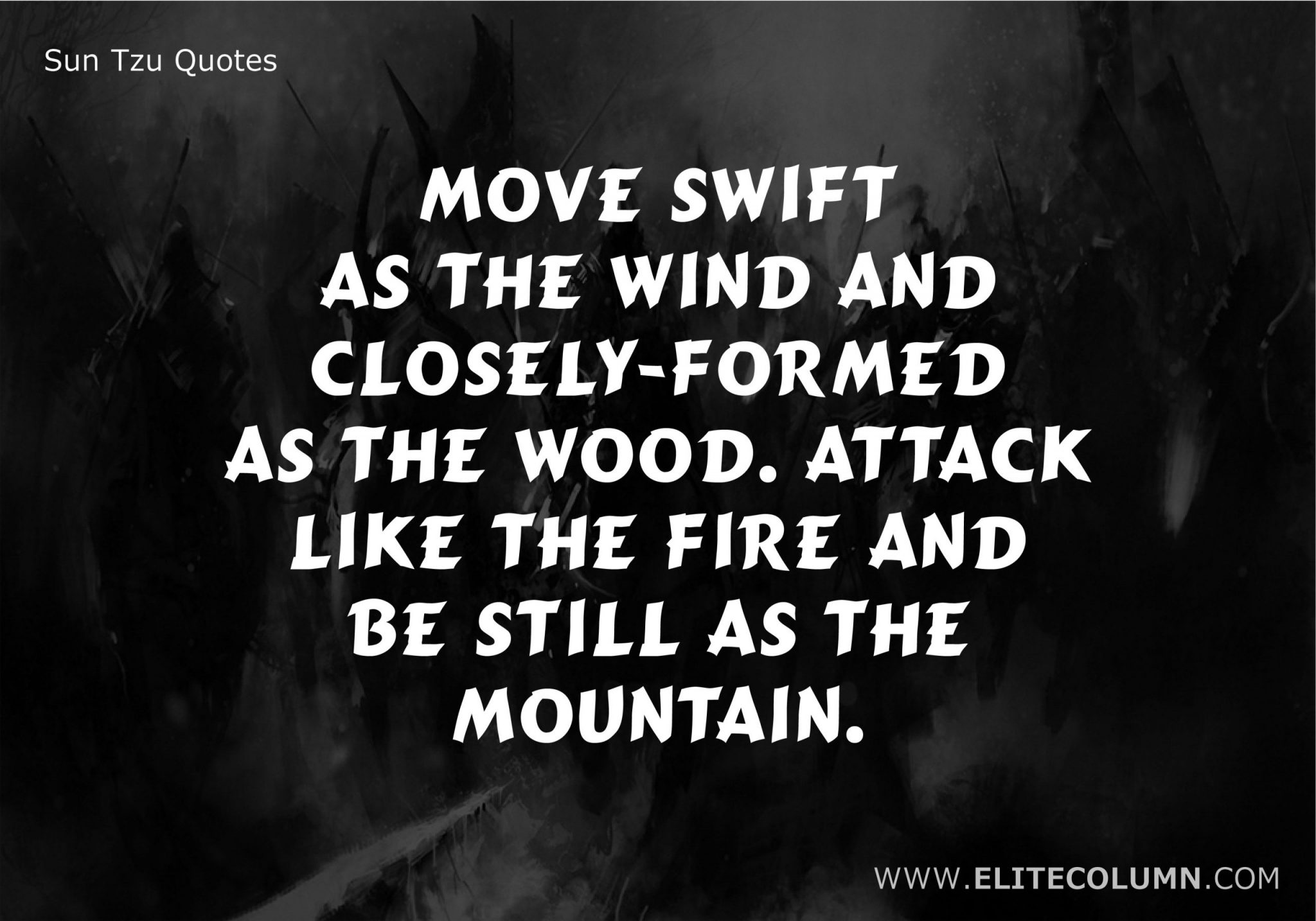 43. “Move swift as the Wind and closely-formed as the Wood. Attack like the Fire and be still as the Mountain.”  – Sun Tzu

44. “Who wishes to fight must first count the cost” – Sun Tzu

45. “Leadership is a matter of intelligence, trustworthiness, humaneness, courage, and sternness.” – Sun Tzu

46. “If the enemy know not where he will be attacked, he must prepare in every quarter, and so be everywhere weak.” – Sun Tzu

47. “Those who win every battle are not really skillful – those who render others’ armies helpless without fighting are the best of all.” – Sun Tzu

48. “If he is secure at all points, be prepared for him. If he is in superior strength, evade him.” – Sun Tzu 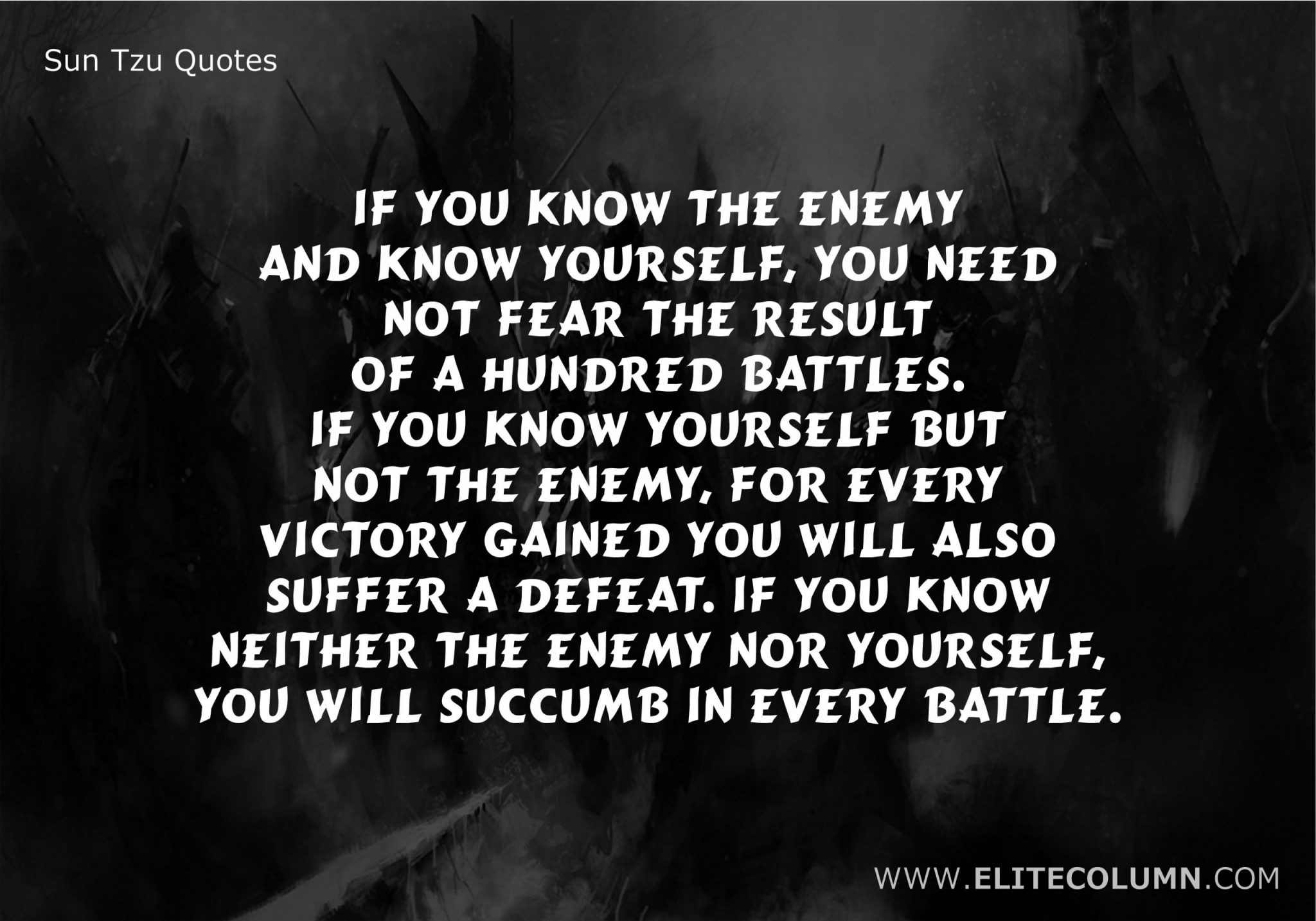 51. “Ponder and deliberate before you make a move.” – Sun Tzu

52. “Rewards for good service should not be deferred a single day.” – Sun Tzu

53. “Begin by seizing something which your opponent holds dear; then he will be amenable to your will.” – Sun Tzu 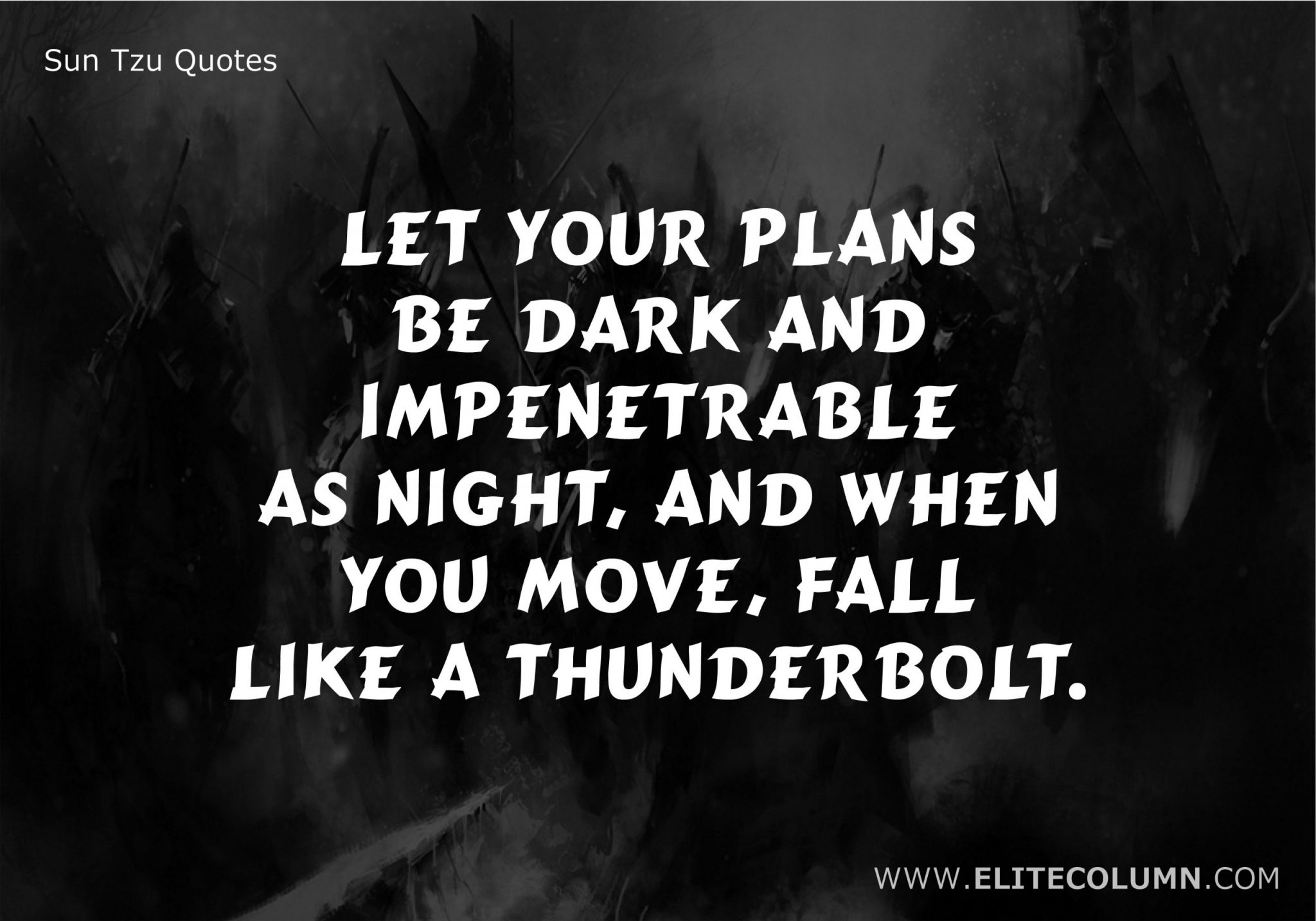 55. “Let your plans be dark and impenetrable as night, and when you move, fall like a thunderbolt.” – Sun Tzu

57. “Move not unless you see an advantage; use not your troops unless there is something to be gained; fight not unless the position is critical.” – Sun Tzu 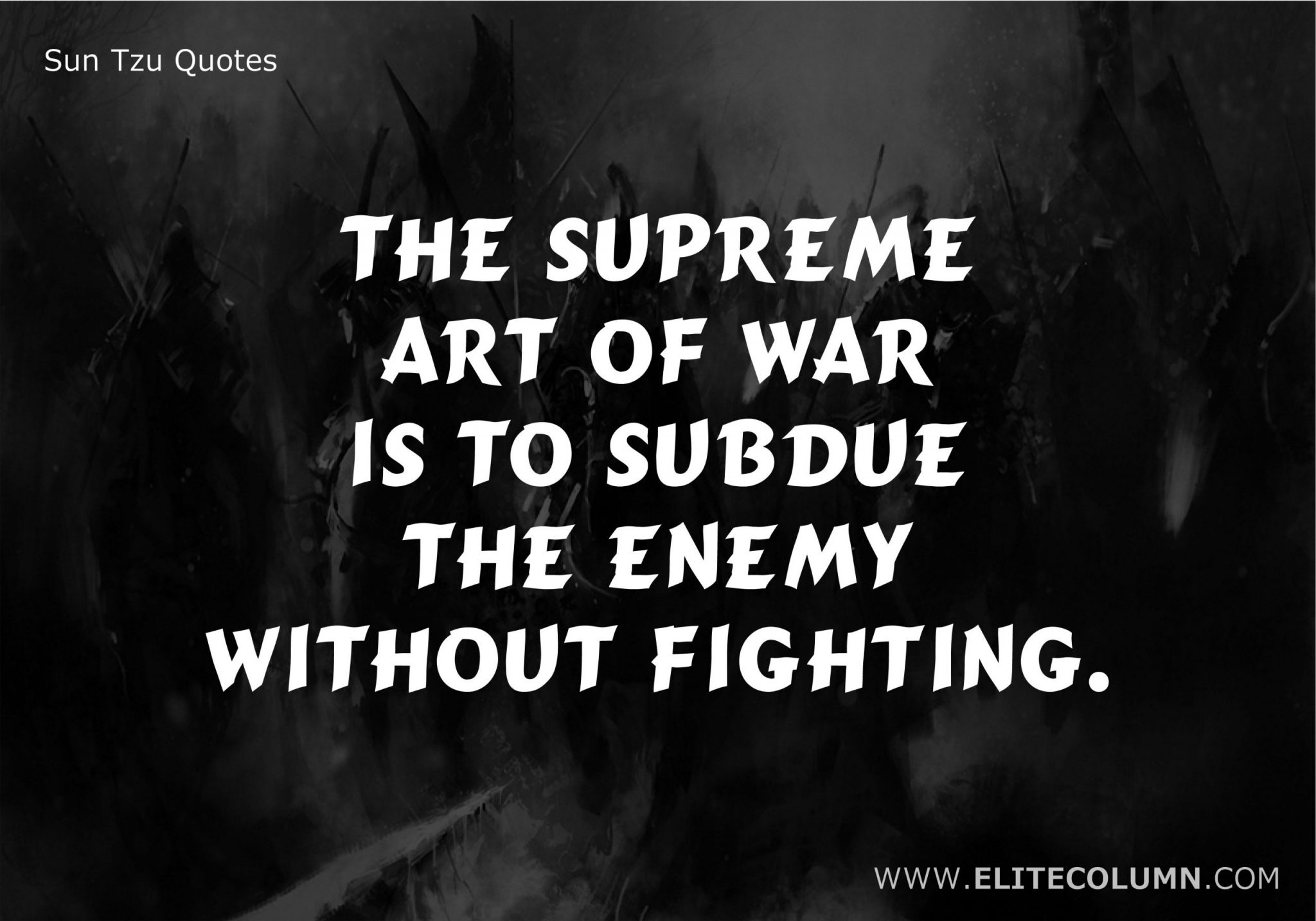 51. “The supreme art of war is to subdue the enemy without fighting.” – Sun Tzu

52. “When envoys are sent with compliments in their mouths, it is a sign that the enemy wishes for a truce.” – Sun Tzu

53. “Every animal with blood in its veins and horns on its head will fight when it is attacked.” – Sun Tzu

54. “Those skilled in warfare move the enemy, and are not moved by the enemy.” – Sun Tzu

Thanks for checking out the best Sun Tzu quotes. Feel free to share the quotes with your friends. Leave a comment below and which are your favorite Sun Tzu quotes ?