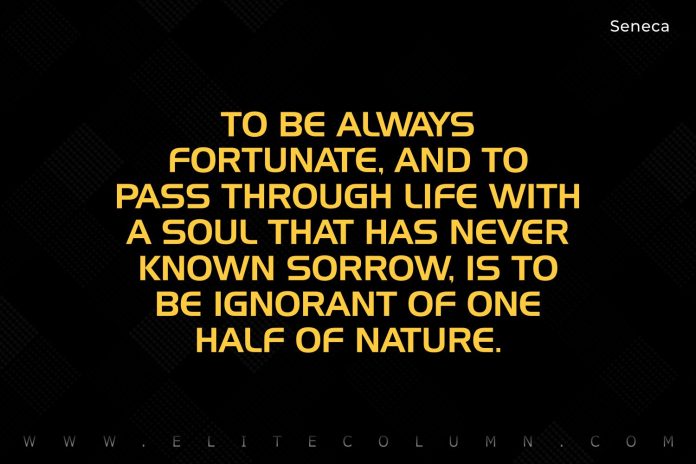 1. “To be always fortunate, and to pass through life with a soul that has never known sorrow, is to be ignorant of one half of nature.” – Seneca

2. “Life is very short and anxious for those who forget the past, neglect the present, and fear the future.” – Seneca

3. “Everyone prefers belief to the exercise of judgement.” – Seneca

5. “Philosophy calls for simple living, not for doing penance, and the simple way of life need not be a crude one.” – Seneca

7. “Nothing deters a good man from doing what is honorable.” – Seneca

10. “The mind that is anxious about future events is miserable.” – Seneca

11. “What need is there to weep over parts of life? The whole of it calls for tears.” – Seneca

12. “Wherever there is a human being, there is an opportunity for kindness.” – Seneca

13. “The part of life we really live is small. For all the rest of existence is not life, but merely time.” – Seneca

14. “Drunkenness is nothing but voluntary madness.” – Seneca

15. “What really ruins our character is the fact that none of us looks back over his life.” – Seneca

17. “Men do not care how nobly they live, but only for how long, although it is within the reach of every man to live nobly, but within no man’s power to live long.” – Seneca

18. “Leisure without books is death, and burial of a man alive.” – Seneca

19. “The abundance of books is distraction.” – Seneca

21. “Economy is too late when you are at the bottom of your purse.” – Seneca

23. “Religion is regarded by the common people as true, by the wise as false, and by rulers as useful.” – Seneca

25. “He that does good to another does good also to himself.” – Seneca

26. “Anger, if not restrained, is frequently more hurtful to us than the injury that provokes it.” – Seneca

28. “There are more things to alarm us than to harm us, and we suffer more often in apprehension than reality.” – Seneca

29. “Luck is what happens when preparation meets opportunity.” – Seneca

30. “Difficulties strengthen the mind, as labor does the body.” – Seneca

32. “If you really want to escape the things that harass you, what you’re needing is not to be in a different place but to be a different person.” – Seneca

34. “Begin at once to live, and count each separate day as a separate life.” – Seneca

36. “Let us train our minds to desire what the situation demands.” – Seneca

37. “One of the most beautiful qualities of true friendship is to understand and to be understood.” – Seneca

38. “It is a rough road that leads to the heights of greatness.” – Seneca

39. “Remember that pain has this most excellent quality. If prolonged it cannot be severe, and if severe it cannot be prolonged.” – Seneca

43. “It is more civilized to make fun of life than to bewail it.” – Seneca

44. “Enjoy present pleasures in such a way as not to injure future ones.” – Seneca

46. “Of this one thing make sure against your dying day that your faults die before you do.” – Seneca

47. “You should live in such a way that there is nothing which you could not as easily tell your enemy as keep to yourself.” – Seneca

48. “It is of course better to know useless things than to know nothing.” – Seneca

49. “Nothing, to my way of thinking, is a better proof of a well ordered mind than a man’s ability to stop just where he is and pass some time in his own company.” – Seneca

50. “He who has injured thee was either stronger or weaker than thee. If weaker, spare him; if stronger, spare thyself.” – Seneca

Thanks for checking out the best Seneca Quotes. Feel free to share the quotes with your friends. Leave a comment below and which are your favourite Seneca Quotes ?