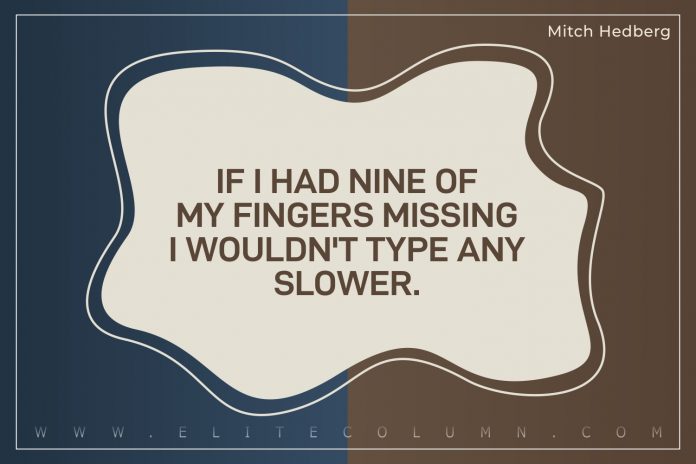 1. “I’m sorry I hurt your feelings when I called you stupid. I really thought you already knew.” – Anonymous

4. “If I had nine of my fingers missing I wouldn’t type any slower.” – Mitch Hedberg

5. “I have always wanted to be somebody, but I see now I should have been more specific.” – Lily Tomlin

6. “Unless your name is Google stop acting like you know everything.” – Anonymous

8. “An apple a day keeps anything away if you throw it hard enough.” – Anonymous

9. “Always carry a flagon of whiskey in case of snakebite and furthermore always carry a small snake.” – W. C. Fields

11. “I am so clever that sometimes I don’t understand a single word of what I am saying.” – Oscar Wilde

12. “It takes considerable knowledge just to realize the extent of your own ignorance.” – Thomas Sowell

13. “Everyone has the right to be stupid, but you are abusing the privilege.” – Anonymous

14. “There’s no secret about success. Did you ever know a successful man who didn’t tell you about it?” -​ Kin Hubbard

15. “Knowledge is like underwear. It is useful to have it, but not necessary to show it off.” – Bill Murray

17. “When one door closes, another opens. Or you can open the closed door. That’s how doors work.” – Anonymous

18. “Sometimes I need what only you can provide: your absence.” – Ashleigh Brilliant

19. “A clear conscience is usually the sign of a bad memory.” – Steven Wright

20. “They say marriages are made in heaven. But so is thunder and lightning.” – Clint Eastwood

21. “Crocodiles are easy. They try to kill and eat you. People are harder. Sometimes they pretend to be your friend first.” – Steve Irwin

25. “The four most beautiful words in our common language: I told you so.” – Gore Vidal

26. “A man in love is incomplete until he has married. Then he’s finished.” – Zsa Zsa Gabor

27. “If you want to change the world, do it while you’re single. Once you’re married you can’t even change the TV Channel.” – Anonymous

28. “It’s amazing how you can have to worst day ever, but still laugh at yourself when you push a door that says pull.” – Anonymous

29. “The road to success is always under construction.” – Lily Tomlin

30. “What do people do with all the extra time they save by writing ‘k’ instead of ‘ok’?” – Anonymous

31. “If you’re going to tell people the truth, be funny or they’ll kill you.” – Billy Wilder

32. “Half the world is composed of idiots, the other half of people clever enough to take indecent advantage of them.” – Walter Kerr

33. “I’m not saying I hate you, what I’m saying is that you are literally the Monday of my life.” – Anonymous

34. “There’s no better vacation than my boss being on vacation.” – Anonymous

35. “You’ve got to be very careful if you don’t know where you are going, because you might not get there.” – Yogi Berra

36. “A lie gets halfway around the world before the truth has a chance to get its pants on.” – Winston Churchill

37. “A pessimist is a man who thinks everybody is as nasty as himself, and hates them for it.” – George Bernard Shaw

39. “When I die, I want to die like my grandfather who died peacefully in his sleep. Not screaming like all the passengers in his car.” – Will Rogers

40. “I came from a real tough neighborhood. Once a guy pulled a knife on me. I knew he wasn’t a professional, the knife had butter on it.” – Rodney Dangerfield

41. “That’s why they call it the American Dream, because you have to be asleep to believe it.” – George Carlin

42. “Half our life is spent trying to find something to do with the time we have rushed through life trying to save.” – Will Rogers

43. “I don’t always tolerate stupid people. But when I do, I’m probably at work.” – Anonymous

45. “Everything is changing. People are taking the comedians seriously and the politicians as a joke.” – Will Rogers

47. “Don’t mistake my efficiency as meaning I want to do your job, too.” – Anonymous

48. “Life is short. Smile while you still have teeth.” – Anonymous

49. “When people ask me stupid questions, it is my legal obligation to give a sarcastic remark.” – Anonymous

50. “If you find me offensive. Then I suggest you quit finding me.” – Anonymous

Thanks for checking out the best Sarcastic Quotes. Feel free to share the quotes with your friends. Leave a comment below and which are your favourite Sarcastic Quotes ?