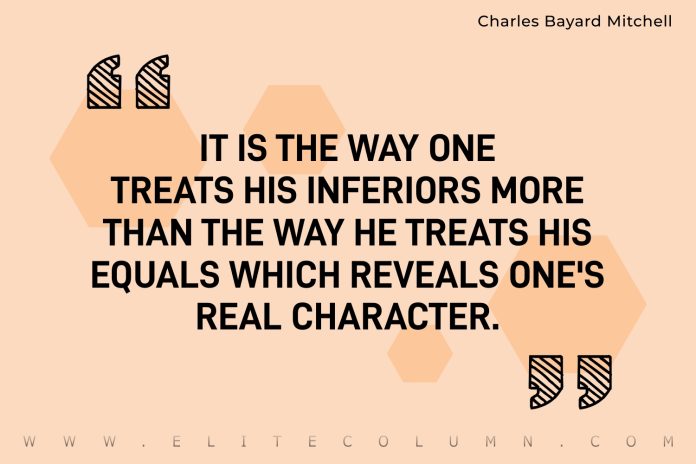 Check out 50 Respect Others Quotes today.

1. “I’m not concerned with your liking or disliking me All I ask is that you respect me as a human being.” – Jackie Robinson

2. “Truly powerful women don’t explain why they want respect. They simply don’t engage those who don’t give it to them.” – Sherry Argov

3. “Self-respect is the root of discipline. The sense of dignity grows with the ability to say no to oneself.” – Abraham Joshua Heschel

4. “It is the way one treats his inferiors more than the way he treats his equals which reveals one’s real character.” – Charles Bayard Mitchell

6. “There are lots of people I admire and respect, but I don’t necessarily want to be like them. I’m too happy being myself.” – James D’arcy

7. “Respect is not based on their age and experience, it’s about their behaviour towards humanity!” – Sobhana Kr

8. “The bond that links your true family is not one of blood, but of respect and joy in each other’s life.” – Richard Bach

9. “The more you know and respect yourself, the more impact you will have on people around you.” – Maxime Lagace

10. “Respect other people’s feelings. It might mean nothing to you, but it could mean everything to them.” – Roy T. Bennett

11. “I guess at the end of the day, all women like to be appreciated and treated with respect and kindness.” – Sofia Vergara

12. “Know your worth. You must find the courage to leave the table if respect is no longer being served.” – Tene Edwards

14. “A society which does not protect, respect and honor its women can have no claim of being civilized.” – Sadhguru

15. “I would rather be alone with dignity than in a relationship that requires me to sacrifice my self respect.” – Mandy Hale

16. “Respect is appreciation of the separateness of the other person, of the ways in which he or she is unique.” – Annie Gottlieb

17. “Respect yourself above all.” – Pythagoras

19. “Respect is how to treat everyone.” – Richard Branson

20. “All sides must learn to respect one another.” – Reuven Rivlin

21. “Knowledge will give you power, but character respect.” – Bruce Lee

22. “Respect is one of the greatest expressions of love.” – Miguel Angel Ruiz

24. “Most good relationships are built on mutual trust and respect.” – Mona Sutphen

25. “How people treat you with their karma. How you react is yours.” – Wayne W. Dyer

26. “Respect was invented to cover the empty place where love should be.” – Leo Tolstoy

27. “There is no respect for others without humility in one’s self.” – Henri Frederic Amiel

28. “To get down to the quick of it respect motivates me not success.” – Hugh Jackman

29. “The easiest way to open a closed door is with kindness and respect.” – Manuel Corazzari

30. “This is how you start to get respect, by offering something that you have.” – Mitch Albom

31. “If we lose love and self-respect for each other, this is how we finally die.” – Maya Angelou

32. “Give to every other human being every right that you claim for yourself.” – Thomas Paine

33. “If we desire respect for the law, we must first make the law respectable.” – Louis D Brandeis

34. “We don’t need to share the same opinions as others, but we need to be respectful.” – Taylor Swift

35. “A truly free society is based on a vision of respect for people and what they value.” – Charles Koch

37. “I firmly believe that respect is a lot more important, and a lot greater, than popularity.” – Julius Erving

38. “One of the surprising things in this world is the respect a worthless man has for himself.” – E. W. Howe

39. “No boundary off area surrounds the heart of a person that lost their self and others.” – Shannon L. Alder

40. “Responsibility and respect of others and their religious beliefs are also part of freedom.” – Horst Koehler

41. “We should all consider each other as human beings, and we should respect each other.” – Malala Yousafzai

42. “The respect you show to others (or lack thereof) is an immediate reflection on your self respect.” – Alex Elle

43. “To be one, to be united is a great thing. But to respect the right to be different is maybe even greater.” – Bono

44. “A child who is allowed to be disrespectful to his parents will not have true respect for anyone.” – Billy Graham

45. “Perhaps the surest test of an individual’s integrity is his refusal to do or say anything that would damage his self-respect.” – Thomas S. Monson

46. “If you have some respect for people as they are, you can be more effective in helping them to become better than they are.” – John W. Gardner

49. “It takes no compromising to give people their rights. It takes no money to respect the individual. It takes no survey to remove repressions.” – Harvey Milk