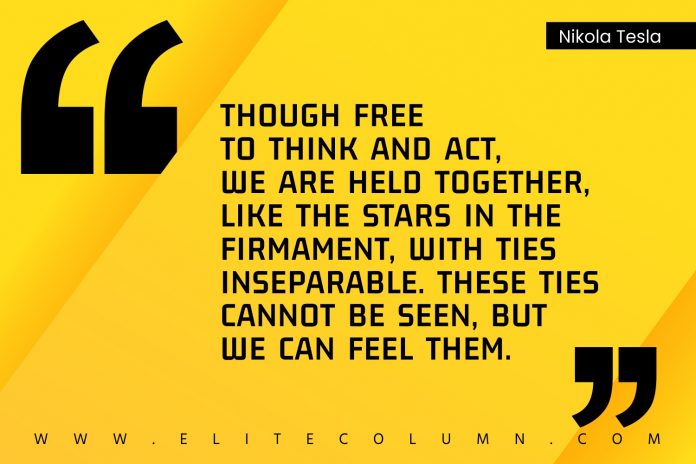 1. “Though free to think and act, we are held together, like the stars in the firmament, with ties inseparable. These ties cannot be seen, but we can feel them.” – Nikola Tesla

2. “In a crystal, we have clear evidence of the existence of a formative life principle, and though we cannot understand the life of a crystal, it is nonetheless a living being.” – Nikola Tesla

4. “Throughout the infinite, the forces are in a perfect balance, and hence the energy of a single thought may determine the motion of a universe.” – Nikola Tesla

5. “I do not think you can name many great inventions that have been made by married men.” – Nikola Tesla

6. “The desire that guides me in all I do is the desire to harness the forces of nature to the service of mankind.” – Nikola Tesla

7. “My belief is firm in a law of compensation. The true rewards are ever in proportion to the labor and sacrifices made.” – Nikola Tesla

8. “No free energy device will ever be allowed to reach the market.” – Nikola Tesla

9. “Woman will ignore precedent and startle civilization with their progress.” – Nikola Tesla

10. “Anti-social behavior is a trait of intelligence in a world full of conformists.” – Nikola Tesla

13. “Of all the frictional resistances, the one that most retards human movement is ignorance. “ – Nikola Tesla

14. “If you want to find the secrets of the universe, think in terms of energy, frequency, and vibration.” – Nikola Tesla

15. “It will soon be possible to transmit wireless messages around the world so simply that any individual can carry and operate his own apparatus.” – Nikola Tesla

16. “To know each other we must reach beyond the sphere of our sense perceptions.” – Nikola Tesla

17. “If your hate could be turned into electricity, it would light up the whole world.” – Nikola Tesla

18. “You may live to see man-made horrors beyond your comprehension.” – Nikola Tesla

19. “The day science begins to study non-physical phenomena, it will make more progress in one decade than in all the previous centuries of its existence.” – Nikola Tesla

20. “I could only achieve success in my life through self-discipline, and I applied it until my wish and my will became one.” – Nikola Tesla

22. “The Buddhist expresses it in one way, the Christian in another, but both say the same: We are all one.” – Nikola Tesla

23. “The beauty and the scent of roses can be used as medicine and the sun rays as a food.” – Nikola Tesla

24. “Our entire biological system, the brain, and the Earth itself works on the same frequencies.” – Nikola Tesla

25. “What one man calls God, another calls the laws of physics.” – Nikola Tesla