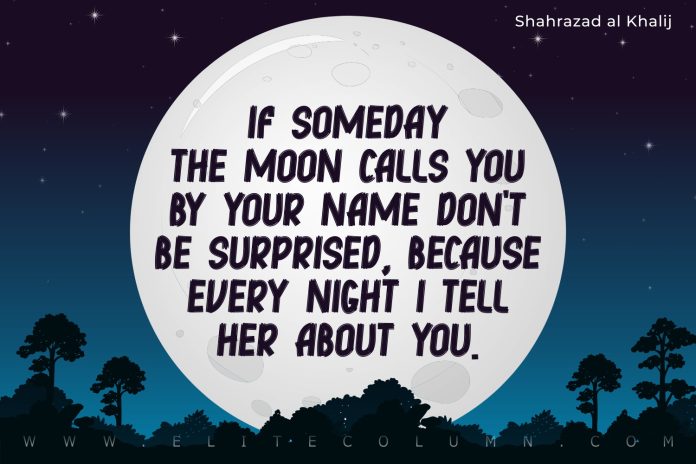 2. “If someday the moon calls you by your name don’t be surprised, because every night I tell her about you.” – Shahrazad al Khalij

3. “In presence of the Moon nobody sees stars.” – Amit Kalantri

4. “There are nights when the wolves are silent and only the moon howls.” – George Carlin

5. “When I admire the wonders of a sunset or the beauty of the moon, my soul expands in the worship of the creator.” – Mahatma Gandhi

6. “There is no dark side of the moon really. Matter of fact it’s all dark.” – Pink Floyd

7. “And all the insects ceased in honor of the moon.” – Jack Kerouac

8. “The moon a luminous guide for the poetic musings of my soul.” – Meeta Ahluwalia

9. “It was the kind of moon that I would want to send back to my ancestors and gift to my descendants so they know that I too have been bruised by beauty.” – Sanober Khan

10. “Life is too short to not have fun we are only here for a short time compared to the sun and the moon and all that.” – Coolio

12. “I feel like the moon is a very beautiful woman. She’s in control.” – Ravyn Lenae

13. “Everyone is a moon, and has a dark side which he never shows to anybody.” – Mark Twain

14. “Don’t tell me the moon is shining show me the glint of light on broken glass.” – Anton Chekhov

15. “The moon rested right above the mountains, a place I call home.” – Daniel Wallock

18. “The moon is a friend for the lonesome to talk to.” – Carl Sandburg

19. “But even when the moon looks like it’s waning it’s actually never changing shape. Don’t ever forget that.” – Ai Yazawa

20. “The moon will guide you through the night with her brightness, but she will always dwell in the darkness, in order to be seen.” – Shannon L. Alder

21. “It is a beautiful and delightful sight to behold the body of the Moon.” – Galileo Galilei

22. “The moon is queen of everything. She rules the oceans, rivers, rain. When I am asked whose tears these are; I always blame the moon.” – Lucille Clifton

23. “I’d rather live in a world where I get to love the moon than in one where I don’t, even if the moon won’t return the feeling.” – Alex London

24. “Meditate. Live purely. Be quiet. Do your work with mastery. Like the moon, come out from behind the clouds! Shine.” – Gautama Buddha

25. “During the day the Sun causes wounds. And in the night the Moon heals the wounds.” – Suyasha Subedi

26. “I can feel the moon’s love for the earth in my soul when it’s magical silent silvery light touches my heart.” – Debasish Mridha MD

27. “Your thoughts are a veil on the face of the Moon. That Moon is your heart, and those thoughts cover your heart. So let them go, just let them fall into the water.” – Rumi

28. “The moon was reigning over their world, glowing its full splendor to all those willing to look up.” – Irina Serban

29. “You are the sun. You bring warmth, laughter and joy but he is the moon. He draws me into a world of mystery that I have never known.” – Meredith T. Taylor

30. “The moon fascinates us in her simplicity.” – Avijeet Das

31. “When I look at the moon I do not see a hostile, empty world. I see the radiant body where man has taken his first steps into a frontier that will never end.” – David Scott

32. “The moon stared at me through sprinkled nighttime stardust and I alone smile.” – Jay Long

33. “The faults of a superior person are like the sun and moon. They have their faults, and everyone sees them they change and everyone looks up to them.” – Confucius

34. “The beautiful moon is an antidepressant. Love for her light is in every heart because she is so friendly, loving and forgiving.” – Debasish Mridha MD

35. “She is twice as beautiful as the moon and all of the stars together.” – Giovannie de Sadeleer

36. “The Moon is the first milestone on the road to the stars.” – Arthur C. Clarke

38. “It is no secret that the moon has no light of her own, but is, as it were, a mirror, receiving brightness from the influence of the sun.” – Vitruvius

39. “The moon, like a flower in heaven’s high bower, With silent delight Sits and smiles on the night.” – William Blake

40. “There’s no point in saving the world if it means losing the moon.” – Tom Robbins

41. “I love to think that animals and humans and plants and fishes and trees and stars and the moon are all connected.” – Gloria Vanderbilt

42. “Always remember we are under the same sky, looking at the same moon.” – Maxine Lee

43. The moon is brighter since the barn burned.” – Matsuo Basho

44. The moon is essentially gray, no color. It looks like plaster of Paris, like dirty beach sand with lots of footprints in it.” – James A. Lovell

45. I’ve never felt like I was born with a silver spoon at all, although I’ve felt like howling at the moon a lot of times!” – Van Morrison

46. I’ve written a lot of books which are written from the moon – the view from nowhere.” – Clifford Geertz

47. If the Sun and Moon should ever doubt, they’d immediately go out.” – William Blake

48. If you strive for the moon, maybe you’ll get over the fence.” – James Wood

49. The army is always the same. The sun and the moon change. The army knows no seasons.” – Frank S. Nugent

50. The day, water, sun, moon, night – I do not have to purchase these things with money.” – Plautus

Thanks for checking out the best Moon Quotes. Feel free to share the quotes with your friends. Leave a comment below and which are your favourite Moon Quotes ?