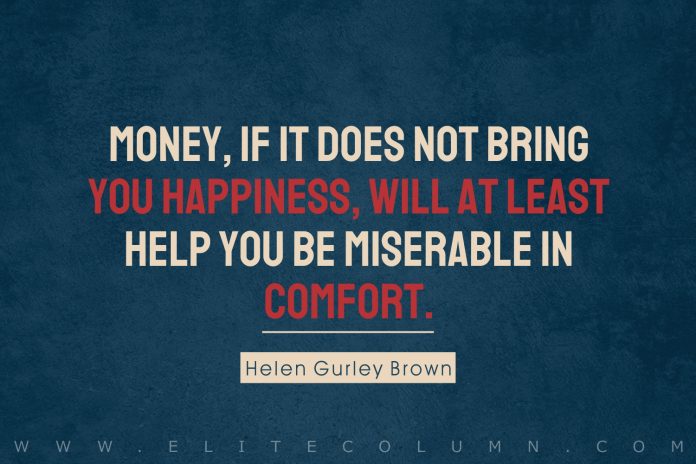 1. “Money is like a sixth sense – and you can’t make use of the other five without it.” – William Somerset Maugham

2. “Money, if it does not bring you happiness, will at least help you be miserable in comfort.” –  Helen Gurley Brown

3. “Money is better than poverty, if only for financial reasons.” – Woody Allen

4. “Money is the opposite of the weather. Nobody talks about it, but everybody does something about it.” – Rebecca Johnson

5. “The safest way to double your money is to fold it over and put it in your pocket.” – Kin Hubbard

6. “A bank is a place that will lend you money if you can prove that you don’t need it.” – Bob Hope

7. “We live by the Golden Rule. Those who have the gold make the rules.” – Buzzie Bavasi

8. “Money was never a big motivation for me, except as a way to keep score. The real excitement is playing the game.” – Donald Trump

11. “He who marries for love without money has good nights and sorry days.” – Anonymous

12. “Anyone who lives within their means suffers from a lack of imagination.” – Oscar Wilde

13. “Every day I get up and look through the Forbes list of the richest people in America. If I’m not there, I go to work.” – Robert Orben

15. “Money will buy you a fine dog, but only love can make it wag its tail” – Richard Friedman

16. “If you think nobody cares if you’re alive, try missing a couple of car payments.” – Earl Wilson

17. “Inflation is when you pay fifteen dollars for the ten-dollar haircut you used to get for five dollars when you had hair.” – Sam Ewing

18. “Business is the art of extracting money from another man’s pocket without resorting to violence.” – Max Amsterdam

20. “Too many people spend money they haven’t earned, to buy things they don’t want, to impress people they don’t like.” – Will Smith

22. “You can always change a situation in your favour if you choose to pause, evaluate, and act.” – Avinash VS

23. “The waste of money cures itself, for soon there is no more to waste.” – M.W. Harrison

25. “It frees you from doing things you dislike. Since I dislike doing nearly everything, money is handy.” – Groucho Marx

26. “The economy depends about as much on economists as the weather does on weather forecasters.” – Jean-Paul Kauffmann

27. “If women didn’t exist, all the money in the world would have no meaning.” – Aristotle Onassis

28. “People are living longer than ever before, a phenomenon undoubtedly made necessary by the 30-year mortgage.” – Doug Larson

29. “If inflation continues to soar, you’re going to have to work like a dog just to live like one.” – George Gobel

30. “If all the economists were laid end to end, they’d never reach a conclusion.” – George Bernard Shaw

33. “Money’s only something you need in case you don’t die tomorrow.” – Carl Fox

34. “The rich. You know why they’re so odd? Because they can afford to be.” – Alexander Knox

35. “A fool and his money are lucky enough to get together in the first place.” – Gordon Gekko

36. “Money and women are the most sought after and the least known about of any two things we have.” – Will Rogers

42. “They were a people so primitive they did not know how to get money, except by working for it.” – Joseph Addison

43. “All I ask is the chance to prove that money can’t make me happy.” – Spike Milligan

44. “You should always live within your income, even if you have to borrow to do so.” – Josh Billings

46. “Undermine the entire economic structure of society by leaving the pay toilet door ajar so the next person can get in free.” – Taylor Meade

48. “We didn’t actually overspend our budget. The allocation simply fell short of our expenditure.” – Keith Davis

50. “Money isn’t everything, but it’s a long way ahead of what comes next.” – Edmund Stockdale

Thanks for checking out the best Money Quotes. Feel free to share the quotes with your friends. Leave a comment below and which are your favourite Money Quotes ?