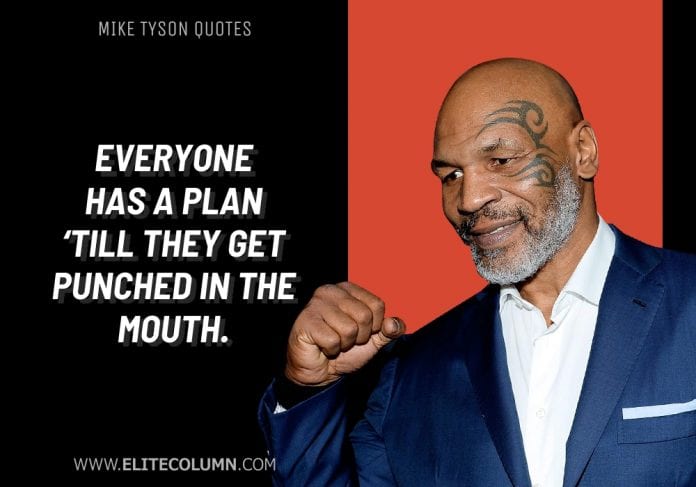 Michael Gerard Tyson, popularly known as Mike Tyson, was born on June 30, 1966 in New York. In 1986, at the age of 20, he became the youngest heavyweight boxing champion of the world. He has gone on to appear in several films and a Broadway show on his life, thereby launching a successful cannabis business, as well as becoming a best-selling author. Mike Tyson quotes will make you courageous and help you fight the battles in your life. EliteColumn presents 25 of the bitter and noteworthy Mike Tyson quotes. 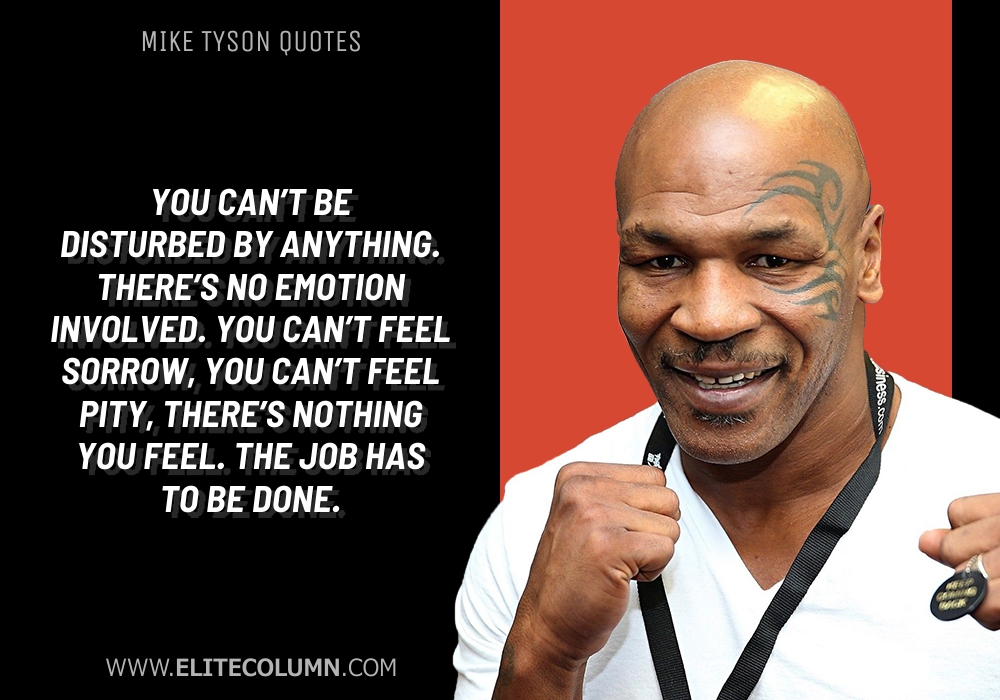 1. “You can’t be disturbed by anything. There’s no emotion involved. You can’t feel sorrow, you can’t feel pity, there’s nothing you feel. The job has to be done.” – Mike Tyson

3. “The ability to apply the discipline, the ability to do what needs to be done no matter how he feels inside, in my opinion, is the definition of a true professional.” – Mike Tyson

4. “In order to succeed greatly, you have to be prepared to fail greatly. If you can’t do both of them, you’ve got a problem.” – Mike Tyson

5. “Hard times fall upon everybody. Whatever it is, we’re going to get out of it.” – Mike Tyson

6. “Most fighters are the most humble people in the world because they’ve gotten their ass kicked before.” – Mike Tyson

7. “That equals to being a fool, having fame and no fortune. A lot of guys out there have fame doing this and doing that, but they are broke.” – Mike Tyson 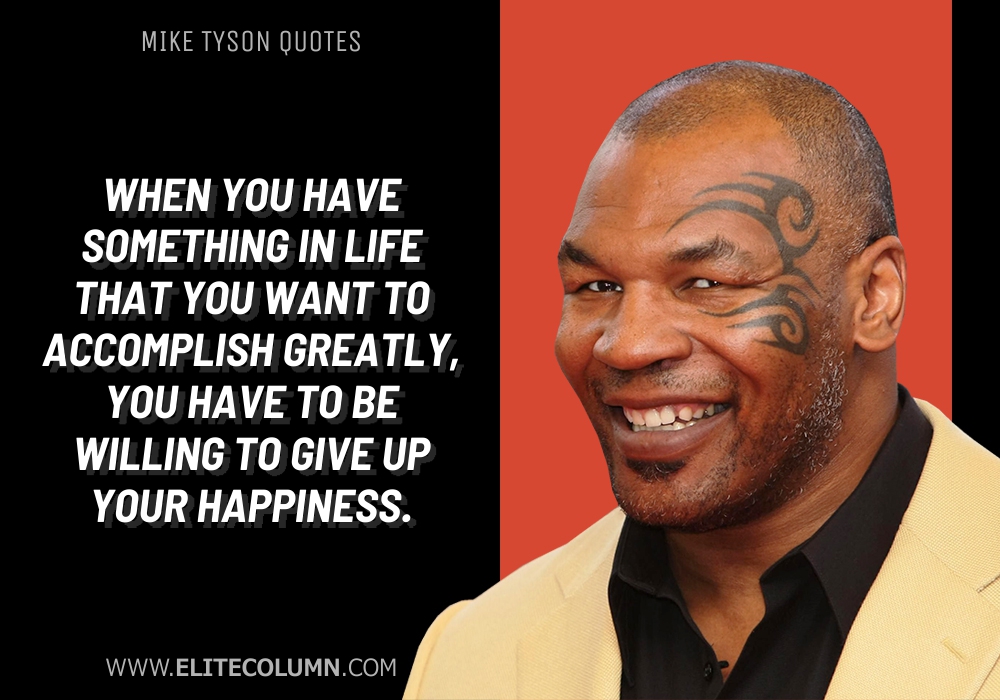 8. “When you have something in life that you want to accomplish greatly, you have to be willing to give up your happiness.” – Mike Tyson

9. “Fighting is a sport if you’re not humble it’s going to bring humbleness to you.” – Mike Tyson

10. “Fighting is not physical, fighting is spiritual. It’s the determination and the will in the guy.” – Mike Tyson

11. “A good fighter needs to be diligent, committed and disciplined doing what you hate to do but do it like you love it.” – Mike Tyson

12. “The tempt for greatness is the biggest drug in the world.” – Mike Tyson

13. “Any man can do what he has to do. But doing it like you love it? That is what takes it to a whole different level. A champion does it like he loves it, even when he doesn’t.” – Mike Tyson 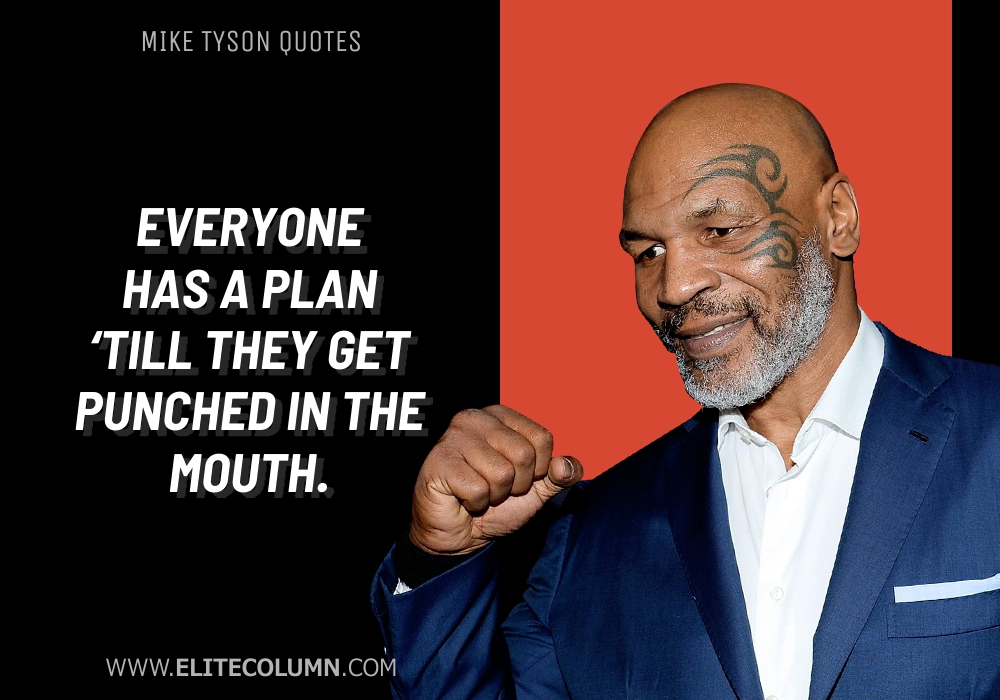 14. “Everyone has a plan ’till they get punched in the mouth.” – Mike Tyson

15. “If you don’t do it for passion and love, the emotional outcome will be disastrous.” – Mike Tyson

16. “Every win, regardless a good or bad one, gives you more confidence.” – Mike Tyson

18. “God lets everything happen for a reason. It’s all a learning process, and you have to go from one level to another.” – Mike Tyson

19. “Greatness is not guarding yourself from the people; greatness is being accepted by the people.” – Mike Tyson 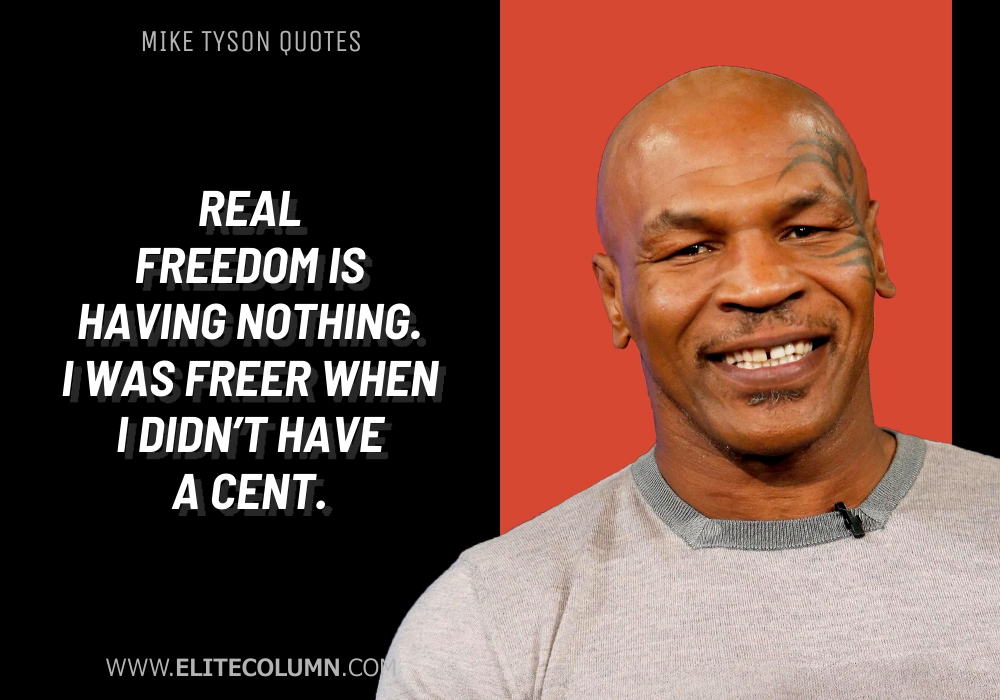 20. “Real freedom is having nothing. I was freer when I didn’t have a cent.” – Mike Tyson

21. “As long as we persevere and endure, we can get anything we want.” – Mike Tyson

22. “We all have struggles in life but we have to continue to fight.” – Mike Tyson

23. “There’s nothing wrong with making mistakes, just don’t make the same ones. We don’t want to duplicate them.” – Mike Tyson

24. “Everyone that you fight is not your enemy and everyone who helps you is not your friend.” – Mike Tyson

25. “You need to learn independence. You have to be independent – it builds character.” – Mike Tyson