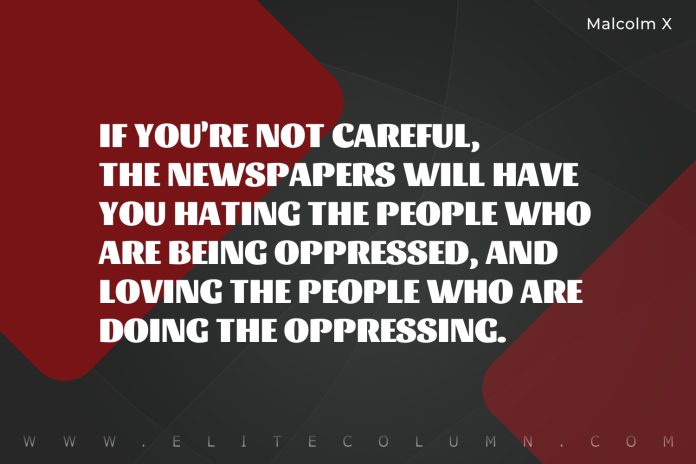 3. “I have more respect for a man who lets me know where he stands, even if he’s wrong, than the one who comes up like an angel and is nothing but a devil.” – Malcolm X

4. “You can’t have capitalism without racism.” – Malcolm X

5. “I see America through the eyes of the victim. I don’t see any American dream–I see an American nightmare.” – Malcolm X

8. “Sometimes you have to pick the gun up to put the Gun down.” – Malcolm X

10. “Usually when people are sad, they don’t do anything. They just cry over their condition. But when they get angry, they bring about a change.” – Malcolm X

12. “In fact, once he is motivated no one can change more completely than the man who has been at the bottom. I call myself the best example of that.” – Malcolm X

13. “I have no mercy or compassion in me for a society that will crush people, and then penalize them for not being able to stand up under the weight.” – Malcolm X

14. “It’s hard for anyone intelligent to be nonviolent.” – Malcolm X

15. “In any organization, someone must be the boss. If it’s even just one person, you’ve got to be the boss of yourself.” – Malcolm X

16. “And just because you have colleges and universities doesn’t mean you have education.” – Malcolm X

17. “I imagine that one of the biggest troubles with colleges is there are too many distractions, too much panty raiding, fraternities, and boola-boola and all of that.” – Malcolm X

19. “I want to take Negroes out of the ghetto and put them in good neighborhoods in good houses.” – Malcolm X

20. “You can’t legislate good will that comes through education.” – Malcolm X

21. “Read absolutely everything you get your hands on because you’ll never know where you’ll get an idea from.” – Malcolm X

23. “It’ll be the ballot or it’ll be the bullet. It’ll be liberty or it’ll be death. And if you’re not ready to pay that price don’t use the word freedom in your vocabulary.” – Malcolm X

24. “I’m a man who believes that I died 20 years ago. And I live like a man who is dead already. I have no fear whatsoever of anybody or anything.” – Malcolm X

25. “My alma mater was books, a good library I could spend the rest of my life reading, just satisfying my curiosity.” – Malcolm X

26. “Any time you beg another man to set you free, you will never be free. Freedom is something that you have to do for yourselves.” – Malcolm X

27. “I have no mercy or compassion in me for a society that will crush people, and then penalize them for not being able to stand up under the weight.” – Malcolm X

28. “Without education, you’re not going anywhere in this world.” – Malcolm X

29. “It is a time for martyrs now, and if I am to be one, it will be for the cause of brotherhood. That’s the only thing that can save this country.” – Malcolm X

30. “All of us who might have probed space, or cured cancer, or built industries—were, instead, black victims of the white man’s American social system.” – Malcolm X

31. “When ghetto living seems normal, you have no shame, no privacy.” – Malcolm X

32. “You’re not to be so blind with patriotism that you can’t face reality. Wrong is wrong, no matter who does it or says it” – Malcolm X

33. “You don’t have to be a man to fight for freedom. All you have to do is to be an intelligent human being.” – Malcolm X

34. “It is only after slavery and prison that the sweetest appreciation of freedom can come.” – Malcolm X

35. “The hardest test I ever faced in my life was praying.” – Malcolm X

36. “I was going through the hardest thing, also the greatest thing, for any human being to do; to accept that which is already within you, and around you.” – Malcolm X

37. “Education is the passport to the future, for tomorrow belongs to those who prepare for it today.” – Malcolm X

38. “Power never takes a back step only in the face of more power. ” – Malcolm X

39. “A new world order is in the making, and it is up to us to prepare ourselves that we may take our rightful place in it.” – Malcolm X

41. “Early in life I learned that if you want something, you better make some noise.” – Malcolm X

42. “A man who stands for nothing will fall for anything.” – Malcolm X

43. “In all our deeds, the proper value and respect for time determines success or failure.” – Malcolm X

45. “People don’t realize how a man’s whole life can be changed by one book.” – Malcolm X

47. “Concerning nonviolence, it is criminal to teach a man not to defend himself when he is the constant victim of brutal attacks.” – Malcolm X

48. “Be peaceful, be courteous, obey the law, respect everyone; but if someone puts his hand on you, send him to the cemetery.” – Malcolm X

50. “You don’t have to be a man to fight for freedom. All you have to do is to be an intelligent human being.” – Malcolm X

Thanks for checking out the best Malcolm X Quotes. Feel free to share the quotes with your friends. Leave a comment below and which are your favourite Malcolm X Quotes ?