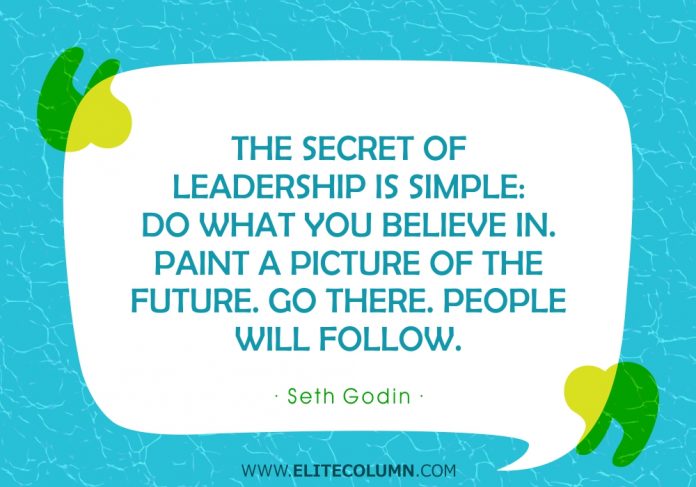 1. “The key to successful leadership is influence, not authority.” – Kenneth H. Blanchard

2. “Management is doing things right; leadership is doing th“A good leader is someone who makes quick decisions and guides people during difficult times.” – Avinash VS

3. “If you would not be forgotten, as soon as you are dead and rotten, either write things worth reading, or do things worth the writing.” – Benjamin Franklin

4. “A leader is best when people barely know he exists. When his work is done, his aim fulfilled, they will say: we did it ourselves.” – Lao Tzu

5. “Become the kind of leader that people would follow voluntarily, even if you had no title or position.” – Brian Tracy

7. “Leadership is an action, not a position.” – Donald McGannon

8. “Never doubt that a small group of thoughtful, concerned citizens can change the world. Indeed it is the only thing that ever has.” – Margaret Mead

9. “You can always change a situation in your favour if you choose to pause, evaluate, and act.” – Avinash VS

10. “Most of the important things in the world have been accomplished by people who have kept on trying when there seemed to be no hope at all.” – Dale Carnegie

11. “The task of leadership is not to put greatness into humanity, but to elicit it, for the greatness is already there.” – John Buchan

12. “The bravest sight in the world is to see a great man struggling against adversity.” – Seneca

15. “Anyone can hold the helm when the sea is calm.” – Publilius Syrus

18. “Success is not final, failure is not fatal: it is the courage to continue that counts.” – Winston Churchill

20. “You gain strength, courage and confidence by every experience in which you really stop to look fear in the face. You must do the thing you think you cannot do.” – Eleanor Roosevelt

21. “Successful leaders see the opportunities in every difficulty rather than the difficulty in every opportunity.” – Reed Markham

23. “Leadership is the art of giving people a platform for spreading ideas that work.” – Seth Godin

24. “The task of the leader is to get their people from where they are to where they have not been.” – Henry Kissinger

26. “Treat people as if they were what they ought to be, and you help them become what they are capable of being.” – Johann Wolfgang von Goethe

27. “If your actions inspire others to dream more, learn more, do more, and become more, you are a leader.” – John Quincy Adams

28. “The function of leadership is to produce more leaders, not more followers.” – Ralph Nader

29. “As we look ahead into the next century, leaders will be those who empower others.” – Bill Gates

30. “You cannot be a leader, and ask other people to follow you, unless you know how to follow, too.” – Sam Rayburn

31. “Anyone, anywhere can make a positive difference.” – Mark Sanborn

33. “Do not follow where the path may lead. Go instead where there is no path and leave a trail.” – Harold R. McAlindon

34. “The best leader is the one who has sense enough to pick good men to do what he wants done, and the self-restraint to keep from meddling with them while they do it.” – Theodore Roosevelt

35. “Real leadership is leaders recognizing that they serve the people that they lead.” – Pete Hoekstra

36. “A leader is not an administrator who loves to run others, but someone who carries water for his people so that they can get on with their jobs.” – Robert Townsend

37. “The secret of leadership is simple: Do what you believe in. Paint a picture of the future. Go there. People will follow.” – Seth Godin

38. “Don’t tell people how to do things. Tell them what to do and let them surprise you with their results.” – George S. Patton Jr.

39. “Becoming a leader is synonymous with becoming yourself. It is precisely that simple and it is also that difficult.” – Warren Bennis

40. “One of the tests of leadership is the ability to recognize a problem before it becomes an emergency.” – Arnold Glasow

42. “The price of greatness is responsibility.” – Winston Churchill

44. “Keep your fears to yourself, but share your courage with others.” – Robert Louis Stevenson

46. “Don’t tell people how to do things, tell them what to do, and let them surprise you with their results.” – George Patton

50. “Leadership is the art of getting someone else to do something you want done because he wants to do it.” – Dwight D. Eisenhower