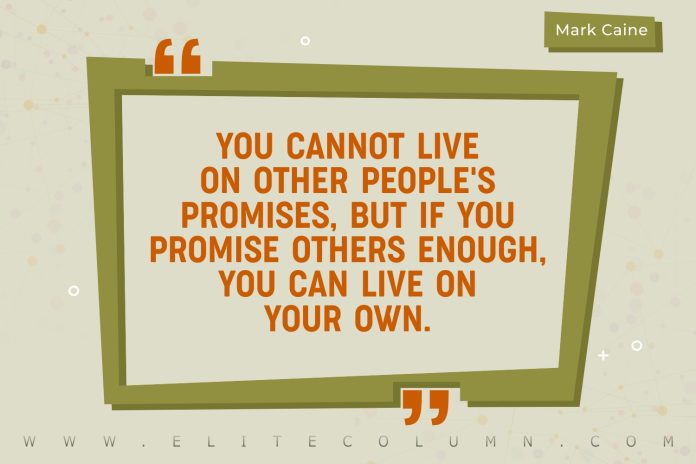 1. “Not the maker of plans and promises, but rather the one who offers faithful service in small matters. This is the person who is most likely to achieve what is good and lasting.” – Johann Wolfgang von Goethe

3. “Promise is most given when the least is said.” – George Chapman

4. “You have to be up-front from the very beginning about what your expectations of the other person are, and you can’t make any promises you don’t intend to keep.” – Jesse Williams

5. “You cannot live on other people’s promises, but if you promise others enough, you can live on your own.” – Mark Caine

6. “A promise made is a debt unpaid.” – Robert Service

7. “We must not promise what we ought not, lest we be called on to perform what we cannot.” – Abraham Lincoln

8. “The promises of yesterday are the taxes of today.” – William Lyon MacKenzie

9. “One must have a good memory to be able to keep the promises that one makes.” – Friedrich Nietzsche

12. “One promises much, to avoid giving little.” – Luc de Clapiers

13. “Oaths are the fossils of piety.” – George Santayana

14. “As a human being, the best eulogy I can reasonably hope for is ‘He made his promises sincerely and broke them regretfully.’” – Robert Brault

16. “Those who promise by the cart-load generally pay by the spadeful.” – James Lendall Basford

17. “It makes my heart sick when I remember all the good words and the broken promises.” – Chief Joseph

18. “Keep all your promises, don’t take what doesn’t belong to you, and always look after those less fortunate than yourself, and you’ll do well in the world.” – Rebecca Rupp

20. “That’s how hearts get broken, you know. When you believe in promises.” – Kathleen Glasgow

21. “Never promise more than you can perform.” – Publilius Syrus

22. “Undertake not what you cannot perform, but be careful to keep your promise.” – George Washington

23. “Always prefer the plain direct word to the long, vague one. Don’t implement promises, but keep them.” – C. S. Lewis

24. “The woods are lovely, dark and deep. But I have promises to keep, and miles to go before I sleep.” – Robert Frost

25. “Promises are only as strong as the person who gives them.” – Stephen Richards

26. “An ounce of performance is worth pounds of promises.” – Mae West

27. “What glitters may not be gold; and even wolves may smile; and fools will be led by promises to their deaths.” – Lauren Oliver

28. “Broken vows are like broken mirrors. They leave those who held to them bleeding and staring at fractured images of themselves.” – Richard Paul Evans

29. “The best way to keep one’s word is not to give it.” – Napoleon Bonaparte

31. “Promises are the uniquely human way of ordering the future, making it predictable and reliable to the extent that this is humanly possible.” – Hannah Arendt

32. “The moment you make someone promise anything is the same moment you ask them to lie to you.” – Molly Ringwald

33. “Hypocrisy can afford to be magnificent in its promises, for never intending to go beyond promise, it costs nothing.” – Edmund Burke

34. “Promises are like crying babies in a theater, they should be carried out at once.” – Norman Vincent Peale

36. “Thou ought to be nice, even to superstition, in keeping thy promises, and therefore equally cautious in making them.” – Thomas Fuller

37. “Political promises are much like marriage vows. They are made at the beginning of the relationship between candidate and voter, but are quickly forgotten.” – Dick Gregory

38. “It is not the oath that makes us believe the man, but the man the oath.” – Aeschylus

39. “Promises were a lot like impressions. The second one didn’t count for much.” – Kristin Hannah

40. “Promises and pie-crust are made to be broken.” – Jonathan Swift

41. “There was plenty of life left and if he had to he would use it all to get her back. The time had passed for making promises to her-all that was left for him was to act.” – Anna Godbersen

43. “I do not live on false promises. I cannot afford to live on bad advice.” – Robert Kiyosaki

44. “The best promises forever seem to be made by amnesiacs.” – Chris Gould

45. “Some people still make promises and keep those they make. When they do, they help make life around them more stably human.” – Lewis B. Smedes

46. “It is easy to make promises it is hard work to keep them.” – Boris Johnson

47. “Some people break promises for the pleasure of breaking them.” – William Hazlitt

48. “He was a man, he always performed his promises.” – Zebulon Pike

49. “When a man takes an oath he’s holding his own self in his own hands. Like water. And if he opens his fingers then he needn’t hope to find himself again.” – Robert Bolt