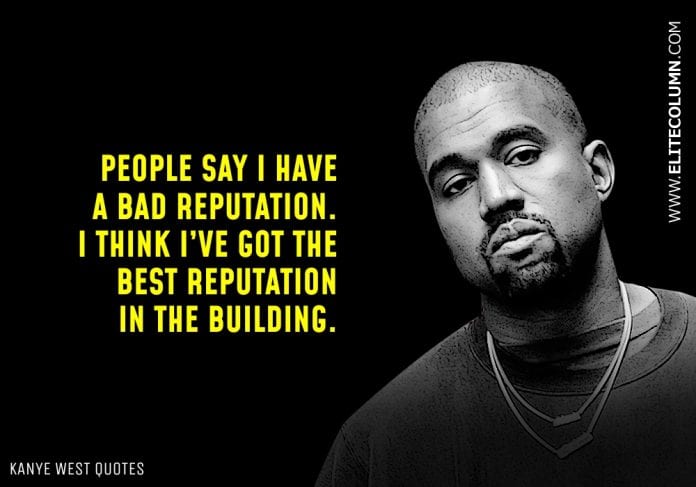 Kanye West is a 21st-century phenomenon – a producer turned rap superstar who has reinvented hip hop several times over in the course of a stellar career. He has made headlines for his bizarre tweets and his grand pronouncements, his award-show stage invasions, his outré fashion sense and his flashbulb-popping marriage to Kim Kardashian. Kanye West quotes will help you go after your long term goals. EliteColumn brings you 12 best Kanye West quotes. 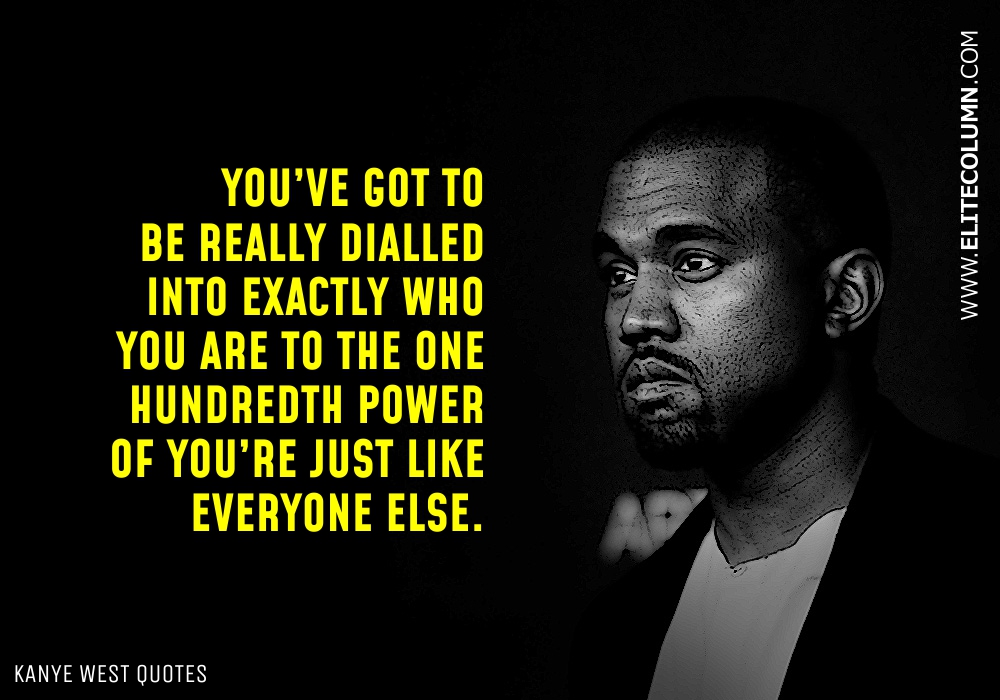 2. “They say people in your life are seasons and anything that happens is for a reason.” – Kanye West

3. “You can’t look at a glass half full or empty if it’s overflowing.” – Kanye West

4. “Know your worth! People always act like they’re doing more for you than you’re doing for them.” – Kanye West 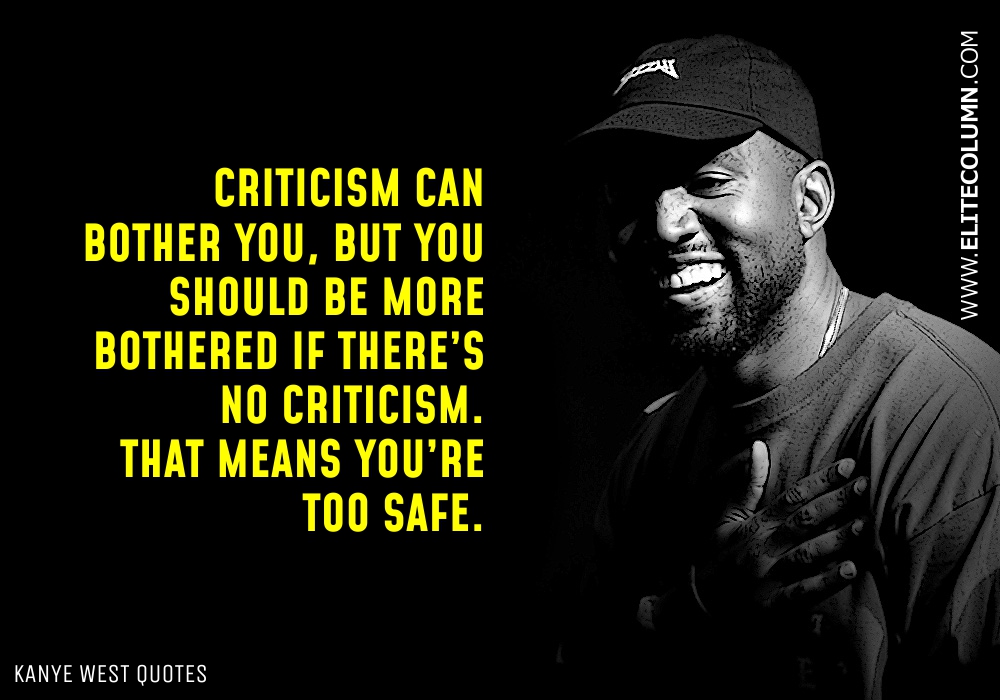 5. “Criticism can bother you, but you should be more bothered if there’s no criticism. That means you’re too safe.” – Kanye West

6. “When you’re the absolute best, you get hated on the most.” – Kanye West

7. “People never change. They just become better at hiding who they really are.” – Kanye West 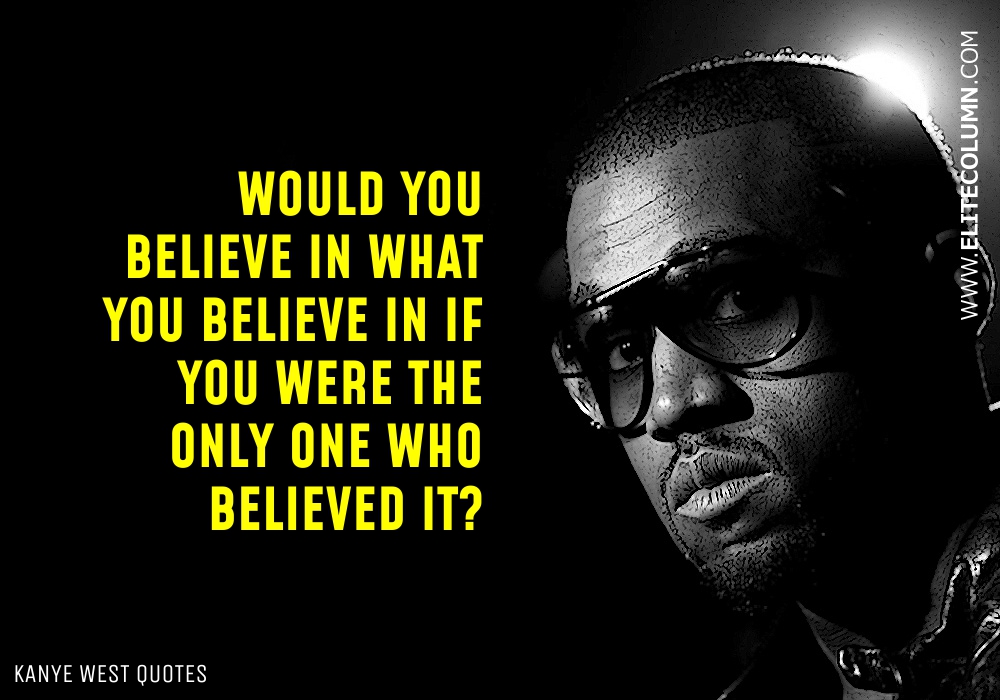 10. “Most people are slowed down by the perception of themselves. If you’re taught you can’t do anything, you won’t do anything. I was taught I can do everything.” – Kanye West

11. “I was never really good at anything except for the ability to learn.” – Kanye West

12. “I refuse to accept other people’s ideas of happiness for me. As if there’s a ‘one size fits all’ standard for happiness.” – Kanye West 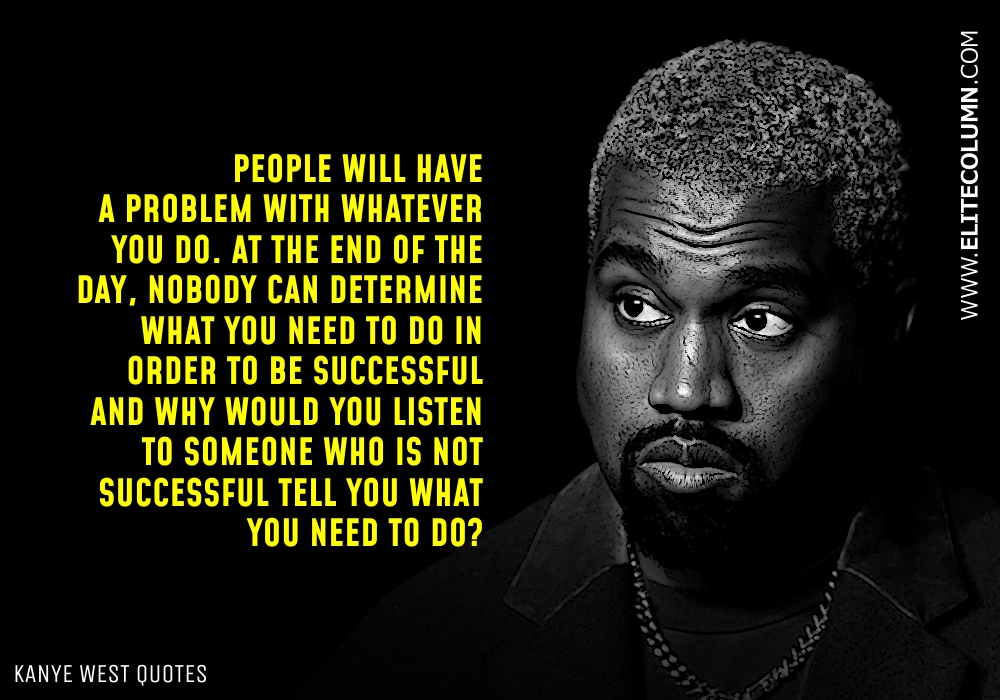 14. “Nothing in life is promised except death.” – Kanye West

15. “Keep your nose out the sky, keep your heart to god, and keep your face to the rising sun.” – Kanye West 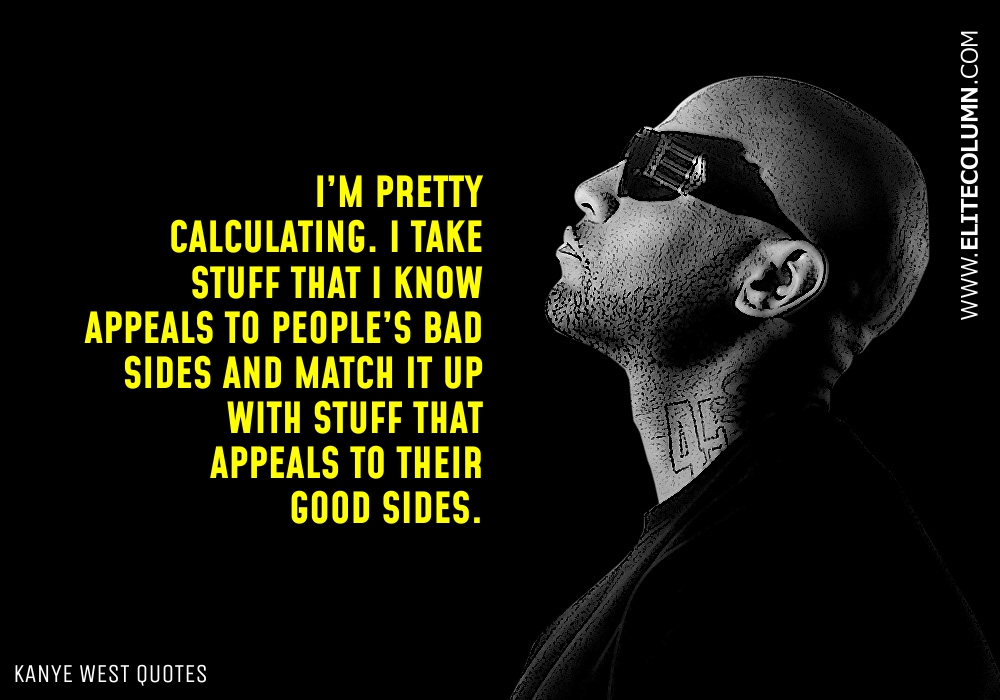 16. “I’m pretty calculating. I take stuff that I know appeals to people’s bad sides and match it up with stuff that appeals to their good sides.” – Kanye West 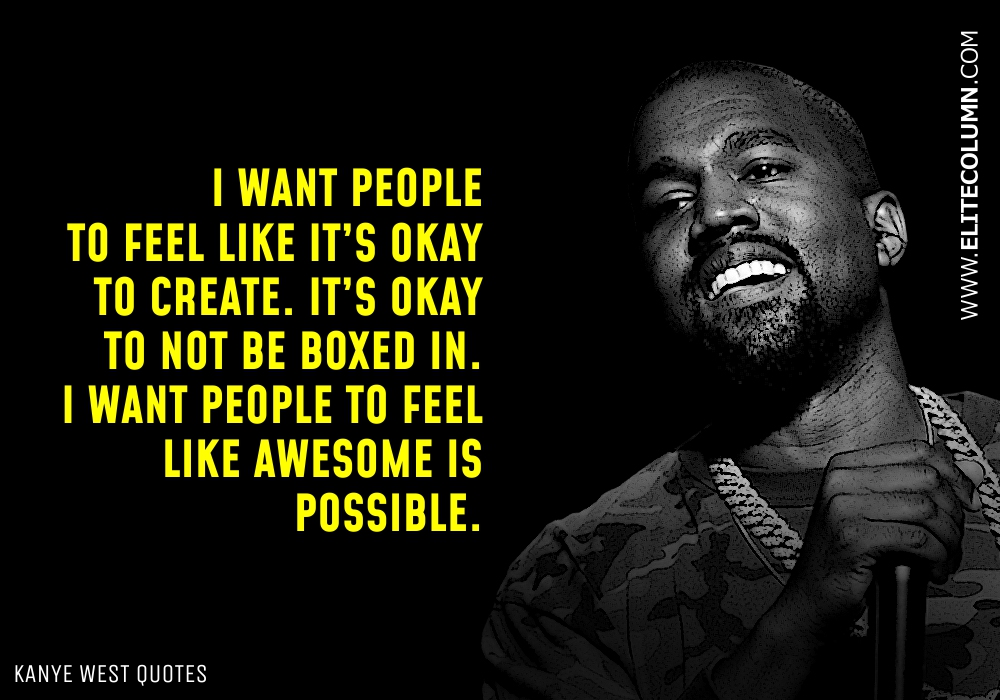 20. “I care. I care about everything. Sometimes not giving a f#%k is caring the most.” – Kanye West

21. “Believe in your flyness…conquer your shyness.” – Kanye West 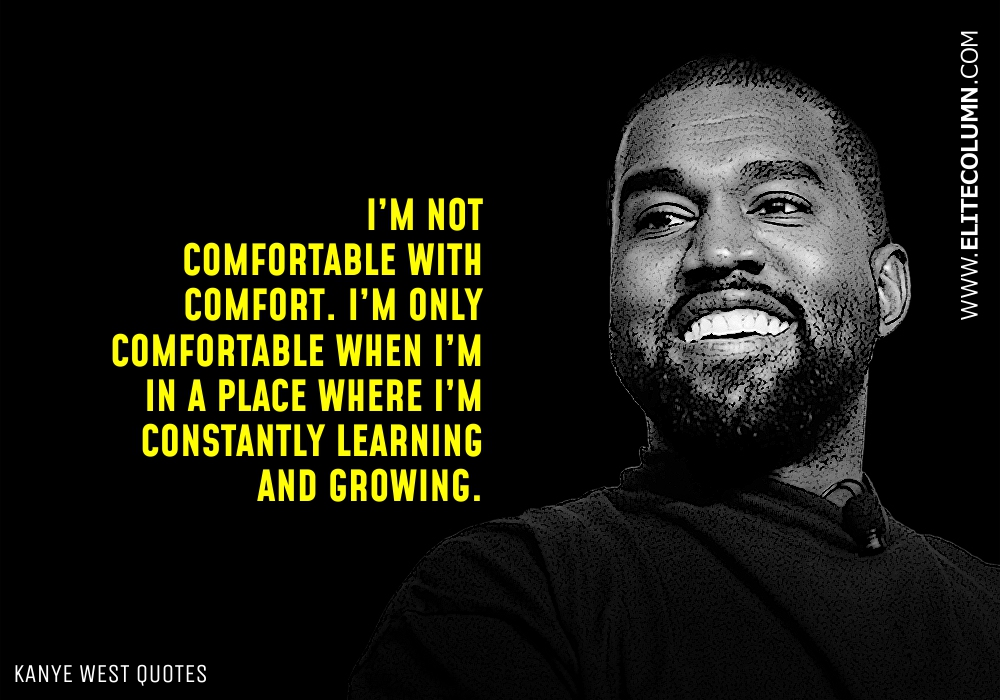 22. “I’m not comfortable with comfort. I’m only comfortable when I’m in a place where I’m constantly learning and growing.” – Kanye West

23. “I’m on the pursuit of awesomeness, excellence is the bare minimum.” – Kanye West 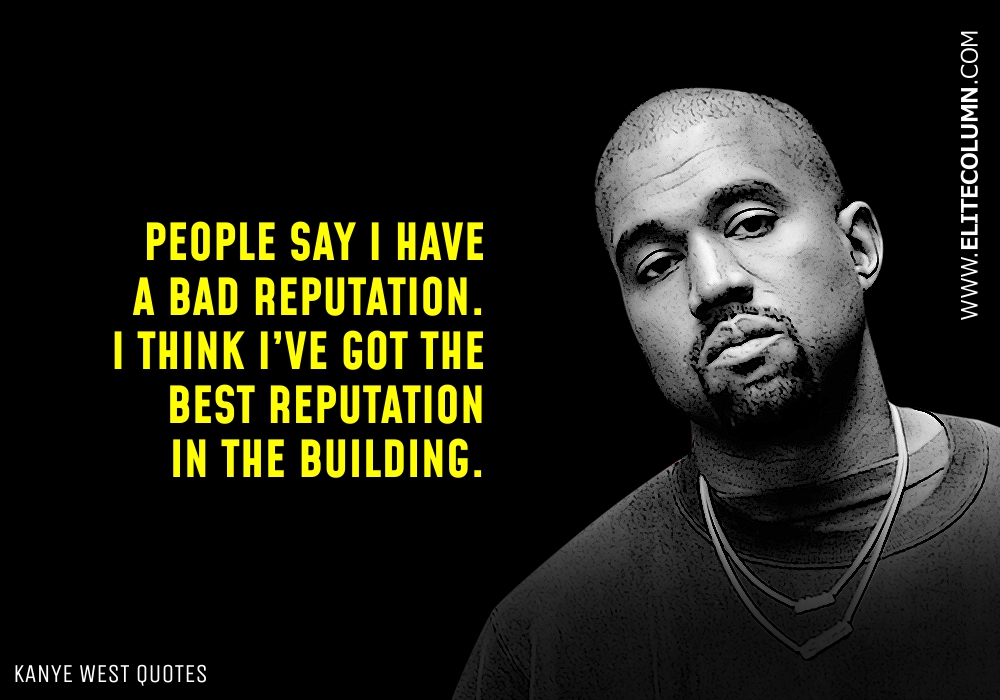 25. “People say I have a bad reputation. I think I’ve got the best reputation in the building.” – Kanye West 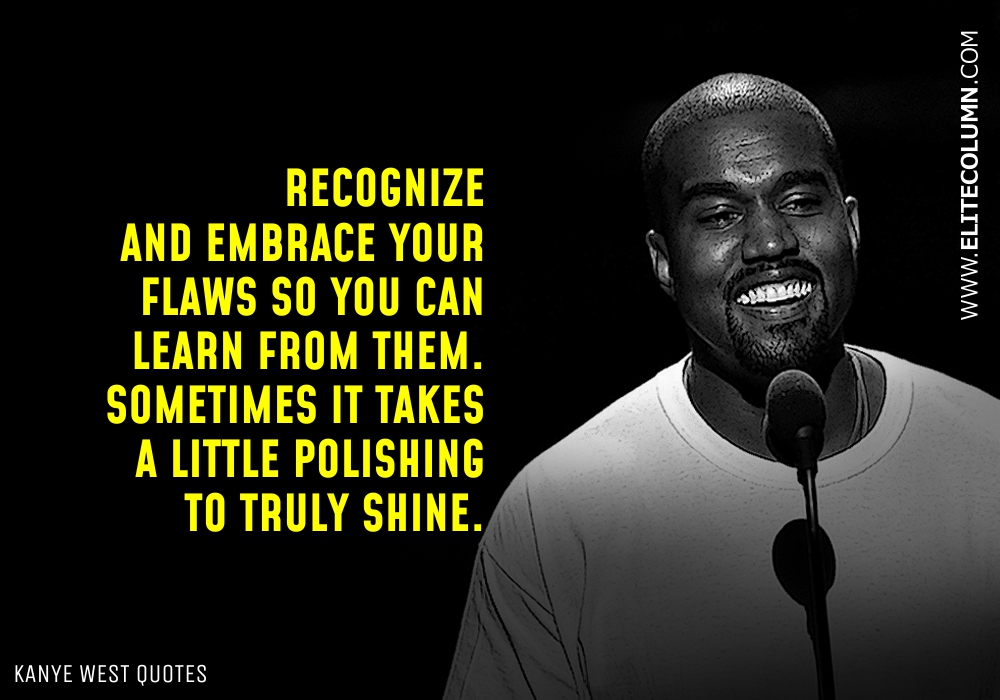 28. “Recognize and embrace your flaws so you can learn from them. Sometimes it takes a little polishing to truly shine.” – Kanye West

29. “Justice could just be clearing a path for people to dream properly.” – Kanye West

30. “Creative output, you know, is just pain. I’m going to be cliche for a minute and say that great art comes from pain.” – Kanye West 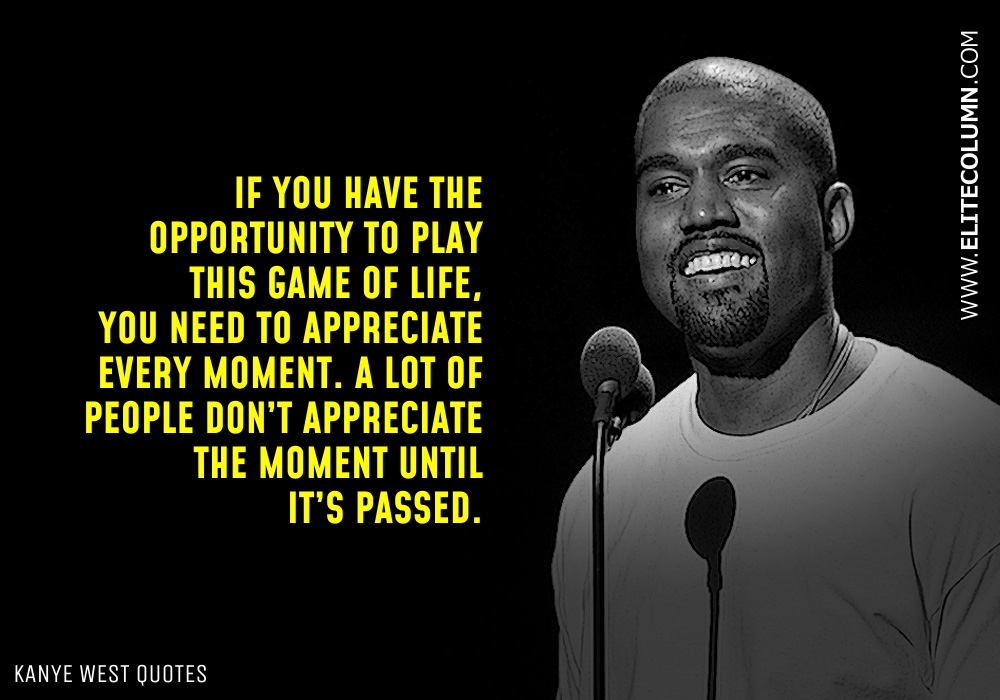 31. “If you have the opportunity to play this game of life, you need to appreciate every moment. A lot of people don’t appreciate the moment until it’s passed.” – Kanye West

32. “Why are people so afraid of creative ideas and so scared of truth? All I want to do is do good.” – Kanye West