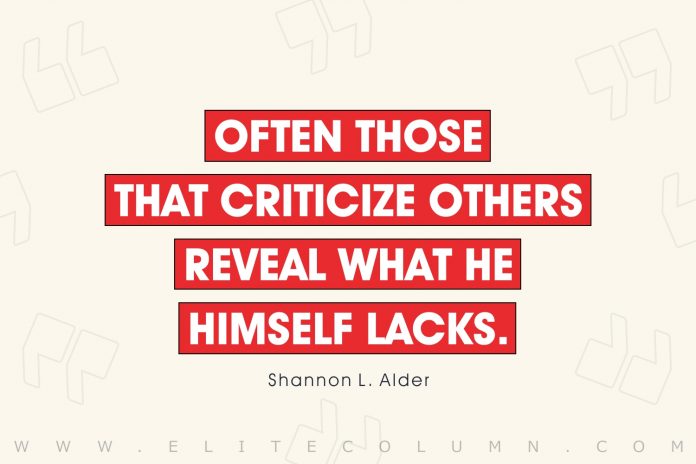 1. “The worst part of success is trying to find someone who is happy for you.” – Bette Midler

2. “Moral indignation is jealousy with a halo.” – H.G. Wells

3. “Resentment is like drinking poison and waiting for the other person to die.” – Carrie Fisher

4. “Anger, resentment and jealousy doesn’t change the heart of others – it only changes yours.” –  Shannon Alder

5. “Isn’t it kind of silly to think that tearing someone else down builds you up?” – Sean Covey

6. “Often those that criticize others reveal what he himself lacks.” – Shannon L. Alder

7. “You can only be jealous of someone who has something you think you ought to have yourself.” – Margaret Atwood

8. “Gossip is just a tool to distract people who have nothing better to do from feeling jealous of those few of us still remaining with noble hearts.” – Anna Godbersen

9. “The only thing more frustrating than slanderers is those foolish enough to listen to them.” – Criss Jami

10. “She had loved him for such a long time, she thought. How was it that she did now know him at all?” – Cassandra Clare

13. “Insecure people only eclipse your sun because they’re jealous of your daylight and tired of their dark, starless nights.” – Shannon L. Alder

14. “Margaret was not a ready lover, but where she loved she loved passionately, and with no small degree of jealousy.” – Elizabeth Gaskell

15. “For a second I was almost jealous of the clouds. Why was he looking to them for an escape when I was right here beside him?” – Kamila Shamsie

16. “And I got out of there without punching anyone, kicking anyone, or breaking down in tears. Some days the small victories are all you achieve.” – Molly Ringle

17. “Men are jealous of every woman, even when they don’t have the slightest interest in her themselves.” – Jan Neruda

18. “Most haters are stuck in a poisonous mental prison of jealousy and self-doubt that blinds them to their own potentiality.” – Steve Maraboli

19. “I’ve never been jealous before I met you, it burns, luv. Like silver through my veins. Some nights, watching you with other men on your jobs, I think it will drive me mad.” – Jeaniene Frost

20. “The thermometer of success is merely the jealousy of the malcontents.” – Salvador Dali

21. “Jealousy, that dragon which slays love under the pretence of keeping it alive.” – Havelock Ellis

23. “Jealousy isn’t a pleasant quality, but if it isn’t overdone (and if it’s combined with modesty), apart from its inconvenience there’s even something touching about it.” – Milan Kundera

24. “When emerging from humble beginnings, those around you tend to underestimate your authenticity because they knew you before you were ‘somebody’.” – Criss Jami

26. “I love being in love, but I also love other things, like not being jealous, overly sensitive, or needy.” –  Dark Jar Tin Zoo

27. “What sort of love is permeated by jealousy? You are jealous because you are unaware that everything you need is inside you.” – Peter Deunov

28. “For God’s sake, let’s take the word ‘possess’ and put a brick round its neck and drown it … We can’t possess one another. We can only give and hazard all we have.” – Dorothy L. Sayers

29. “He seems like a man who knows what he wants, and the problem is he wants what I want.” – Abbi Glines

31. “I won’t lie. I want to beat the hell out of any man who’s had you – you’d be smart to keep them the hell away from me – but nothing in your past can change how I feel about you.” – Sylvia

32. “What? Just because I can’t have you right now, doesn’t mean I’m okay with him having you.” –  Cora Carmack

33. “My jealousy is a living thing. Shifting, changing, growing. Like my rage and my mother’s regret.” –  Katja Millay

34. “Animals don’t know as much about jealousy as people, but they’re not ignorant of it, either.” –  Stephen King

35. “Humans are suspicious and jealous creatures. When they see something perfect, they want to find a flaw.” – Gosho Aoyama

36. “Jealousy is never satisfied with anything short of an omniscience that would detect the subtlest fold of the heart.” – George Eliot

37. “It’s a bad word, ‘belong.’ Especially when you put it with somebody you love … You can’t own a human being.” – Toni Morrison

38. “I said I was impressed, Martha. I’m beside myself with jealousy. What do you want me to do, throw up?” – Edward Albee

39. “I really am happy for Kiley. And for you and every other happily married lady. Except for that I’m not happy for you. I kind of want you all to drop dead.” – Rainbow Rowell

40. “When I thought of Eric with someone else, I wanted to rip out all his beautiful blonde hair. By the roots. In clumps.” – Charlaine Harris

41. “Sir, I did not count your glasses of wine, why should you number up my cups of tea?” – Samuel Johnson

42. “In jealousy there is more of self-love than love.” – Francois De La Rochefoucault

43. “Jealousy is that pain which a man feels from the apprehension that he is not equally beloved by the person whom he entirely loves.” – Joseph Addison

44. “Beware of those who criticize you when you deserve some praise for an achievement, for it is they who secretly desire to be worshiped.” – Suzy Kassem

45. “When you have been just told that the girl you love is definitely betrothed to another, you begin to understand how Anarchists must feel when the bomb goes off too soon.” – P.G. Wodehouse

46. “Envy is for people who don’t have the self-esteem to be jealous.” – Bauvard

49. “Yet he was jealous, though he did not show it, for jealousy dislikes the world to know it.” – Lord Byron

50. “It was one thing to accept I couldn’t have Dimitri. It was something entirely different to realize someone else could.” – Richelle Mead

51. “Trifles light as air are to the jealous confirmations strong as proofs of holy writ.” – William Shakespeare

52. “Jealousy has always been my cross, the weakness and woundedness in me that has most often caused me to feel ugly and unlovable, like the Bad Seed.” – Anne Lamott

53. “Jealousy is an ugly emotion that makes people do some seriously whacked shit and when a woman is experiencing it, it’s worse.” – Kristen Ashley

54. “What does jealousy indicate? Jealousy is love manifested in the physical world. If you are jealous you have a debt to pay; if someone is jealous of you, he has a debt to pay to you.” – Peter Deunov

55. “Military guys are rarely as smart as they think they are, and they’ve never gotten over the fact that civilians run the military.” – Maureen Dowd

56. “Do not share your thoughts with people who think that what you are thinking is not worth thinking.” – Michael Bassey Johnson

57. “Besides, I’m not jealous. I’m just so in love with you that there isn’t anything else.” – Ernest Hemingway

58. “I refused to believe that love could take any other form than mine: I measured love by the extent of my jealousy, and by that standard of course she could not love me at all.” – Graham Greene

59. “She let the jealousy slip out of her fingertips.” – Jodi Lynn Anderson

60. “Marriage and its entourage of possession and jealousy enslave the spirit.” – Irvin D. Yalom

61. “Some people talk about other people’s failures with so much pleasure that you would swear they are talking about their own successes.” – Mokokoma Mokhonoana

62. “He who is jealous, is never jealous of what you see, with what is imagined is enough.” – Jacinto Benavente

63. “The lovesick, the betrayed, and the jealous all smell alike.” – Colette

64. “Maybe that was the root of my dislike for her: she had what I wanted, which earned her my jealousy, and since I was ashamed of myself for wanting it, my scorn, as well.” – Nenia Campbell

66. “I wonder if Blue knows she’s repainting her room. I wonder if he’s asking if she wants a ride to the party tonight. I wonder if he knows what being strangled feels like.” – Victoria Scott

67. “What is jealousy but a reflection of your own failures?” – Michael Connelly

68. “Stop worrying about someone taking your spot. God already have it reserved. Do the work to get there and fill it!” – Yvonne Pierre

69. “Never waste jealousy on a real man: it is the imaginary man that supplants us all in the long run.” –  George Bernard Shaw

70. “Mortals are easily tempted to pinch the life out of their neighbor’s buzzing glory, and think that such killing is no murder.” – George Eliot, Middlemarch

71. “Jealousy is a disease, it’s like a poison.” – Francesca Marciano, Casa Rossa

72. “My dear young lady, when you are in love, and jealous, and have been flogged by the Inquisition, there’s no knowing what you may do.” – Voltaire, Candide

73. “What was it about that short creature with her wild hair and spurious air of purity and why would anyone much less two men love her and to such disastrous ends.” – Anna Godbersen

77. “When jealousy rears up, it indicates that something inside of you is afraid. It’s an alarm, nothing less and nothing more. Treat it as such.” – Anthony D. Ravenscroft

Thanks for checking out the best Jealousy Quotes. Feel free to share the quotes with your friends. Leave a comment below and which are your favourite Jealousy Quotes ?