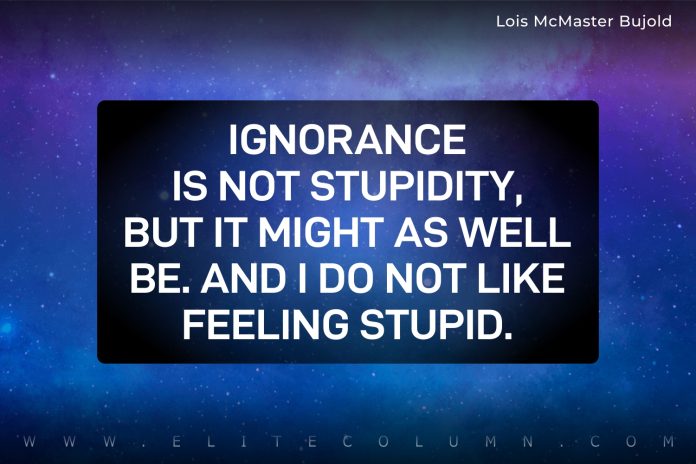 1. “Whoever said ignorance is bliss must have died a horrible death with a really surprised look on his face.” – Lisa Shearin

2. “Don’t let anyone’s ignorance, hate, drama or negativity stop you from being the best person you can be.” – Anonymous

3. “Ignorance is a lot like alcohol: the more you have of it, the less you are able to see its effect on you.” – Jay Bylsma

4. “Ignorance is not stupidity, but it might as well be. And I do not like feeling stupid.” – Lois McMaster Bujold

5. “It is an infantile superstition of the human spirit that virginity would be thought a virtue and not the barrier that separates ignorance from knowledge.” – Voltaire

6. “I am not ashamed to confess I am ignorant of what I do not know.” – Cicero

7. “Most ignorance is vincible ignorance. We don’t know because we don’t want to know.” – Aldous Huxley

9. “The highest form of ignorance is when you reject something you don’t know anything about.” – Wayne Dyer

10. “Where ignorance is our master, there is no possibility of real peace.” – Dalai Lama

12. “Most people are drowning in their delusional ignorance without knowing that their suffering was created by themselves.” – Jakusho Kwong Roshi

14. “Prejudice is a product of ignorance that hides behind barriers of tradition.” – Jasper Fforde

15. “Ignorance and power and pride are a deadly mixture.” – Robert Fulghum

16. “Ignorance, as they say, is usually fatal, but sometimes it can be bliss.” – Eoin Colfer

17. “Ignorance should not be tolerated. It isn’t worthy of our understanding or sympathy.” – Ethan Hunter

18. “The truest characters of ignorance are vanity, pride, and annoyance.” – Samuel Butler

19. “The recipe for perpetual ignorance is: Be satisfied with your opinions and content with your knowledge.” – Elbert Hubbard

20. “Ignorance is never out of style. It was in fashion yesterday, it is the rage today and it will set the pace tomorrow.” – Frank Dane

21. “Ignorance is preferable to error; and he is less remote from the truth who believes nothing, than he who believes what is wrong.” – Thomas Jefferson

23. “Ignorance is the dominion of absurdity.” – James Anthony Froude

24. “Everybody is ignorant, only on different subjects.” – Will Rogers

25. “To know that you do not know is the best. To think you know when you do not is a disease. Recognizing this disease as a disease is to be free of it.” – Lao Tzu

26. “Whatever the cost of our libraries, the price is cheap compared to that of an ignorant nation.” – Walter Cronkite

27. “Confidence is ignorance. If you’re feeling cocky, it’s because there’s something you don’t know.” – Eoin Colfer

28. “Nothing in the world is more dangerous than sincere ignorance and conscientious stupidity.” – Martin Luther King Jr

29. “The greatest enemy of knowledge is not ignorance, it is the illusion of knowledge.” – Daniel J. Boorstin

32. “There are no uninteresting things, only uninterested people.” – G.K. Chesterton

33. “There is nothing more frightful than ignorance in action.” – Johann Wolfgang von Goethe

34. “Being ignorant is not so much a shame, as being unwilling to learn.” – Benjamin Franklin

36. “It is certain, in any case, that ignorance, allied with power, is the most ferocious enemy justice can have.” – James Baldwin

37. “Truth is by nature self-evident. As soon as you remove the cobwebs of ignorance that surround it, it shines clear.” – Mahatma Gandhi

38. “If ignorance is bliss, there should be more happy people.” – Victor Cousin

39. “A great deal of intelligence can be invested in ignorance when the need for illusion is deep.” – Saul Bellow

40. “Ignorance is the parent of fear.” – Herman Melville

41. “A man is responsible for his ignorance.” – Milan Kundera

42. “There are in fact two things, science and opinion; the former begets knowledge, the latter ignorance.” – Hippocrates

43. “Occasionally he stumbled over the truth, but hastily picked himself up and hurried on as if nothing had happened.” – Winston Churchill

44. “A library is like an island in the middle of a vast sea of ignorance, particularly if the library is very tall and the surrounding area has been flooded.” – Daniel Handler

45. “The only victories which leave no regret are those which are gained over ignorance.” – Napoleon Bonaparte

46. “Ignorance is like a delicate exotic fruit; touch it and the bloom is gone.” – Oscar Wilde

47. “He must be very ignorant for he answers every question he is asked.” – Voltaire

48. “Nothing is so firmly believed as that which we least know.” – Michel de Montaigne

49. “Ignorance is a voluntary misfortune.” – Anonymous

50. “A learned fool is more a fool than an ignorant fool.” – Moliere

Thanks for checking out the best Ignorance Quotes. Feel free to share the quotes with your friends. Leave a comment below and which are your favourite Ignorance Quotes ?