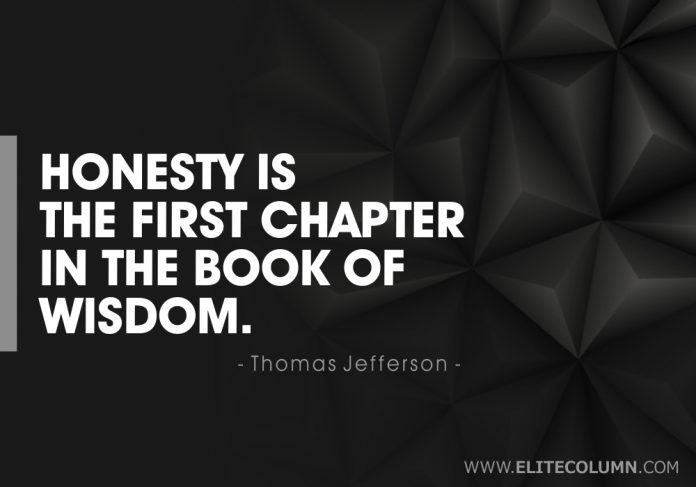 2. “Truth never damages a cause that is just.” – Mahatma Gandhi

3. “I believe fundamental honesty is the keystone of business.” – Harvey S. Firestone

5. “Honesty is of God and dishonesty of the devil; the devil was a liar from the beginning.” – Joseph B. Wirthlin

6. “The elegance of honesty needs no adornment.” – Mary Browne

7. “Honesty is the fastest way to prevent a mistake from turning into a failure.” – James Altucher

8. “Whoever is careless with the truth in small matters cannot be trusted with important matters.” – Albert Einstein

9. “Honesty is the rarest wealth anyone can possess, and yet all the honesty in the world ain’t lawful tender for a loaf of bread.” – Josh Billings

10. “True honesty is hard. Throughout my career, I’ve faced moments where I’ve needed to take an honest look at myself and face some very uncomfortable realities.” – Les Brown

11. “I admire honesty more than any other trait.” – Jerry Reinsdorf

14. “It takes strength and courage to admit the truth.” – Rick Riordan

16. “The establishment of any relationship, both individual and expert is honesty.” – Alexander Mejia

18. “Honesty has a power that very few people can handle.” – Steven Aitchison

19. “Be honest in your life it creates positive energy.” – Fathima Bibi Joosab

20. “It’s difficult to honest with others when you continue lying to yourself.” – Carlos Wallace

21. “We have no relationship without honesty.” – Emily Giffin

22. “One honest relationship can be more productive than fistfuls of business cards.” – Susan Cain

23. “I’d never managed anyone before, so I don’t have a lot of experience. But I’m lucky I have a lot of team members who have a really honest relationship with me.” – Ben Silbermann

25. “Being honest may not get you a lot of friends but it’ll always get you the right ones.” – John Lennon

26. “It’s discouraging to think how many people are shocked by honesty and how few by deceit.” – Noël Coward

27. “All I’m ever looking for in my work in general is honesty and truth and people being real to themselves.” – O Tillett Wright

28. “Honesty pays, but it don’t seem to pay enough to suit some people.” – Frank McKinney

31. “Honesty is the first chapter in the book of wisdom.” – Thomas Jefferson

32. “Make yourself an honest man, and then you may be sure there is one less rascal in the world.” – Thomas Carlyle

33. “Truth is the most valuable thing we have. Let us economize it.” – Mark Twain

34. “To be honest, as this world goes, is to be one man picked out of ten thousand.” – William Shakespeare

36. “To tell the truth is very difficult, and young people are rarely capable of it.” – Leo Tolstoy

38. “To make your children capable of honesty is the beginning of education.” – John Ruskin

40. “It is better to suffer for truth than to prosper by falsehood.” – Danish

41. “The first step is, to be honest, and then to be noble.” – Winston Churchill

42. “If you do not tell the truth about yourself you cannot tell it about other people.” – Virginia Woolf

43. “No legacy is so rich as honesty.” – William Shakespeare

44. “Honesty is one of the most important parts of any marriage.” – Amanda Thompson

45. “Our lives improve only when we take chances – and the first and most difficult risk we can take is to be honest with ourselves.” – Walter Anderson

47. Pretty much all the honest truth telling in the world is done by children.” – Oliver Wendell

48. “Simple honesty of purpose in a man goes a long way in life, if founded on a just estimate of himself and a steady obedience to the rule he knows and feels to be right.” – Samuel Smiles

49. “Honesty is more than not lying. It is truth telling, truth speaking, truth living, and truth loving.” – James E. Faust

50. “Always tell the truth. That way you don’t have to remember what you said.” – Mark Twain

Thanks for checking out the best Honesty Quotes. Feel free to share the quotes with your friends. Leave a comment below and which are your favourite Honesty Quotes ?