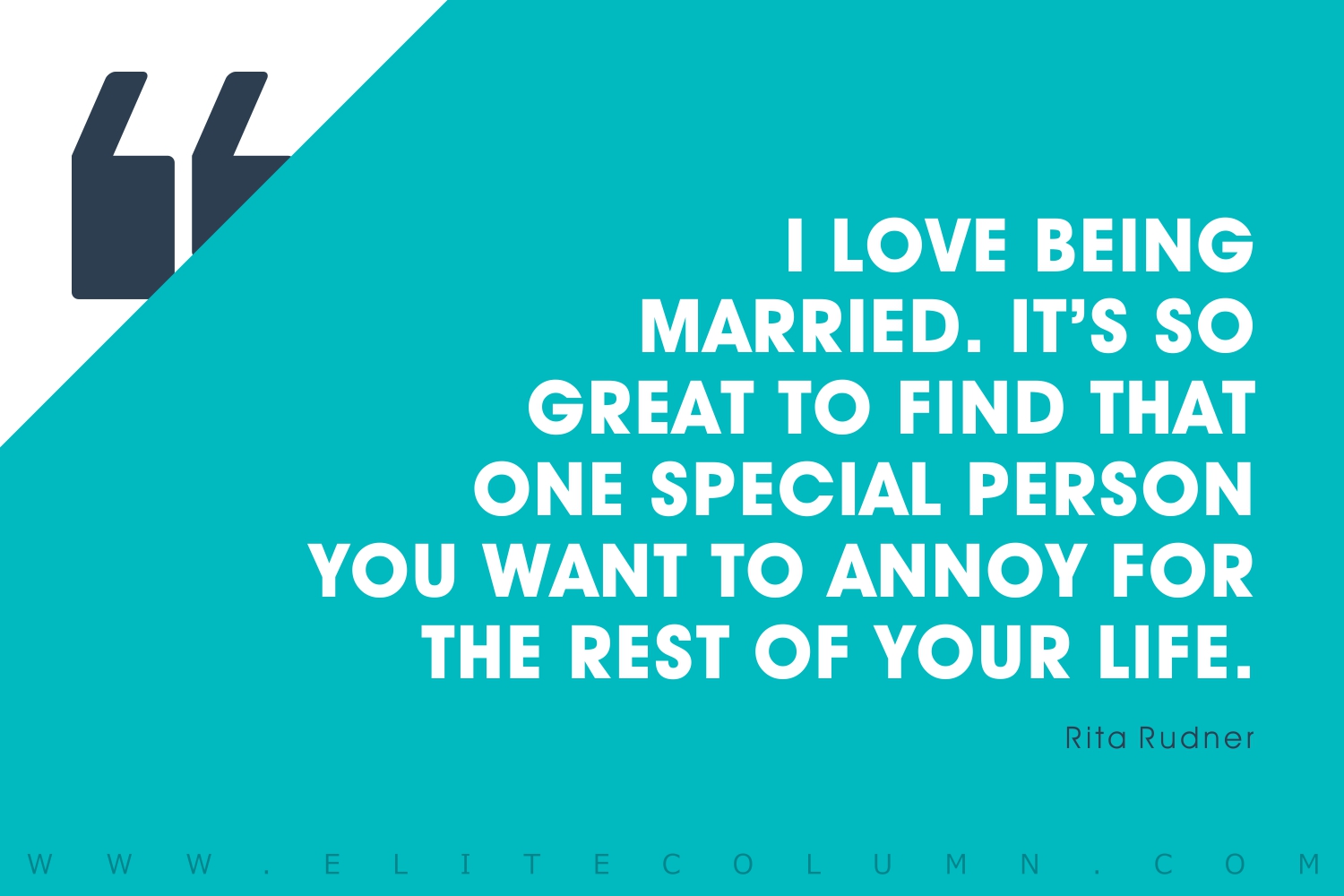 1. “I’m sick of following my dreams, man. I’m just going to ask where they’re going and hook up with ’em later.” – Mitch Hedberg

2. “You know you’re getting old when you stoop to tie your shoelaces and wonder what else you could do while you’re down there.” – George Burns

3. “Instead of the mahi mahi, may I just get the one mahi because I’m not that hungry?” – Shelley Darlingson

4. “Accept who you are. Unless you’re a serial killer.” – Ellen DeGeneres

5. “I walk around like everything’s fine, but deep down, inside my shoe, my sock is sliding off.” – Anonymous

6. “I haven’t spoken to my wife in years. I didn’t want to interrupt her.” – Rodney Dangerfield

8. “Someone asked me, if I were stranded on a desert island what book would I bring: ‘How to Build a Boat.’” – Steven Wright

9. “You know you’ve reached middle age when you’re cautioned to slow down by your doctor, instead of by the police.” – Joan Rivers

10. “Truth hurts. Maybe not as much as jumping on a bicycle with a seat missing, but it hurts.’ – Lt. Frank Drebin

11. “I never feel more alone than when I’m trying to put sunscreen on my back.” – Jimmy Kimmel

12. “Marriage is like an unfunny, tense version of Everybody Loves Raymond, but it doesn’t last 22 minutes. It lasts forever.” – Pete

14. “Clothes make the man. Naked people have little or no influence in society.” – Mark Twain

15. “I love being married. It’s so great to find that one special person you want to annoy for the rest of your life.” – Rita Rudner

17. “Breaking up is like knocking over a Coke machine. You can’t do it in one push; you got to rock it back and forth a few times, and then it goes over.” – Jerry

20. “I never forget a face-but in your case, I’ll be glad to make an exception.” – Groucho Marx

21. “To call you stupid would be an insult to stupid people!” – Wanda

22. “I’m not superstitious, but I am a little stitious.” – Michael Scott

24.“There is no sunrise so beautiful that it is worth waking me up to see it.” – Mindy Kaling

25. “I love being married. It’s so great to find that one special person you want to annoy for the rest of your life.” – Rita Rudner

26. “My mother always used to say The older you get, the better you get, unless you’re a banana.” – Rose

27. “Before you marry a person, you should first make them use a computer with slow Internet  to see who they really are.” – Will Ferrell

28. “Insomnia sharpens your math skills because you spend all night calculating how much sleep you’ll get if you’re able to ‘fall asleep right now.’” – Anonymous

29. “There are only three ages for women in Hollywood: babe, district attorney and Driving Miss Daisy.” – Elise

31. “When your mother asks, ‘Do you want a piece of advice?’ it is a mere formality. It doesn’t matter if you answer yes or no. You’re going to get it anyway.” – Erma Bombeck

33. “Why yes, I can carry on a conversation made up entirely of movie quotes.”  – Anonymous

34. “I’m sure wherever my Dad is, he’s looking down on us. He’s not dead, just very condescending.” – Jack Whitehall

35. “I like long walks, especially when they are taken by people who annoy me.” – Noel Coward

36. “Trying is the first step toward failure.” – Homer Simpson

37. “I want my children to have all the things I couldn’t afford. Then I want to move in with them.” – Phyllis Diller

38. “Why do they call it rush hour when nothing moves?” – Robin Williams

39. “The worst part of online shopping is having to get up and get your credit card from your purse.” – Anonymous

40. “Insanity runs in my family. It practically gallops.” – Mortimer Brewster

41. “Never do anything out of hunger. Not even eating.” – Frank Semyon

42. “There’s nothing wrong with you that an expensive operation can’t prolong.” – Surgeon

43. “Never follow anyone else’s path. Unless you’re in the woods and you’re lost and you see a path. Then by all means follow that path.” – Ellen DeGeneres

44. “Common sense is like deodorant. The people who need it most never use it.” – Anonymous

45. “My Mama says that alligators are ornery because they got all them teeth and no toothbrush.” – Bobby Boucher

46. “The only thing that separates us from the animals is our ability to accessorize.” – Clairee Belcher

47. “Never put off till tomorrow what you can do the day after tomorrow just as well.” – Mark Twain

48. “I have a lot of growing up to do. I realized that the other day inside my fort.” – Zach Galifianakis

49. “I’m at a place in my life when errands are starting to count as going out.” – Anonymous

50. “Never put off till tomorrow what you can do the day after tomorrow just as well.” – Mark Twain

Thanks for checking out the best Hilarious Quotes. Feel free to share the quotes with your friends. Leave a comment below and which are your favourite Hilarious Quotes ?