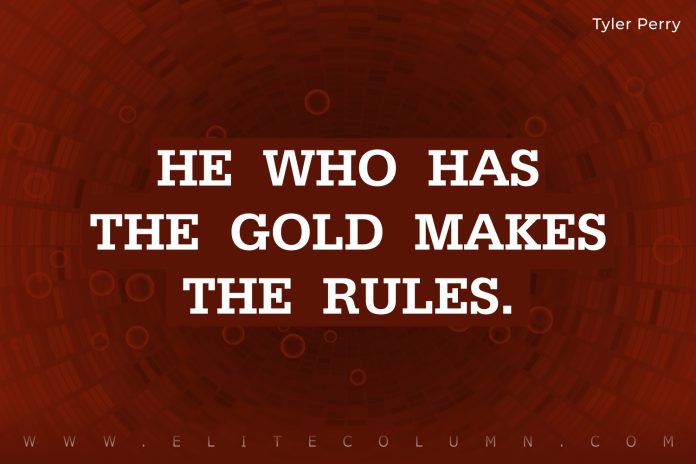 1. He who has the gold makes the rules.” – Tyler Perry

2.“But all these are golden dreams.” – Fyodor Dostoyevsky

4.”The true alchemists do not change lead into gold they change the world into words.”

5.“The desire for gold is the most universal and deeply rooted commercial instinct of the human race” – Gerald M. Loeb

6.”In the interchange of thought use no coin but gold and silver.” – Joseph Joubert

7.”Everything has its limit iron ore cannot be educated into gold.” – Mark Twain

8.”Wisdom is better than silver and gold.” – Lauryn Hill

9.”There is no pot of gold at the end of the rainbow.” – Karen Black

12.“Gold is a treasure, and he who possesses it does all he wishes to in this world and succeeds in helping souls into paradise” – Christopher Columbus

14.”I would think it a greater happiness to gain one soul to Christ than mountains of silver and gold to myself.” – Matthew Henry

15.”More gold has been mined from the thoughts of men than has been taken from the earth.” – Napoleon Hill

16.”As the touchstone tries gold, so gold tries men.” – Chilon of Sparta

18.”Love is the soul’s electric flame, And gold its best conductor.” – Robert Burns

19.”Persecution, in short, is like the goldsmith’s stamp on real silver and gold it is one of the marks of a converted man.” – J. C. Ryle

20.”Tracking the shiny is so much easier than digging for gold!” – Laura Miller

21.”You have to beat the king to be the king. No one is going to hand you a gold medal.” – Donovan Bailey

24.”Knowledge could be more valuable than gold, more deadly than a dagger.” – George R.R. Martin

25.”If you drop a gold coin in mud, it does not lose its value.” – Matshona Dhliwayo

27.”A grain of gold will gild a great surface, but not so much as a grain of wisdom.” – Henry David Thoreau

28.”A chest of gold coins or a fat wallet of bills is of no use whatsoever to a wrecked sailor alone on a raft.” – Alan Watts

29.”Beauty’ is a currency system like the gold standard.” – Naomi Wolf

31.”Count art by gold, and it fetters the feet it once winged.” – Ouida

32.”Death is the golden key that opens the palace of eternity.” – John Milton

34.”You shall not crucify mankind upon a cross of gold.” – William Jennings Bryan

38.”A fine genius in his own country is like gold in the mine.” – Benjamin Franklin

39.“The desire for gold is the most universal and deeply rooted commercial instinct of the human race.” – Gerald M. Loeb

40.“Because gold is honest money it is disliked by dishonest men.” – Ron Paul

42.”Gold opens all locks, No lock will hold against the power of Gold.” – George Herbert

44.”Gold and silver and sunshine is rising up.” – Noel Gallagher

45.”Truth like gold, is to be obtained not by its growth, but by washing away from it all that is not gold.” – Leo Tolstoy

46.”The desire of gold is not for gold. It is not the love of much wheat, and wool and household stuff. It is the means of freedom and benefit.” – Ralph Waldo Emerson

47.“Gold medals aren’t really made of gold. They’re made of sweat, determination and a hard to find alloy called guts.” – Dan Gable

48.”It may be possible to gild pure gold, but who can make his mother more beautiful?” – Mahatma Gandhi

50.“The most pitiful among men is he who turns his dreams into silver and gold” – Kahlil Gibran

Thanks for checking out the best Golden Quotes. Feel free to share the quotes with your friends. Leave a comment below and which are your favourite Golden Quotes ?