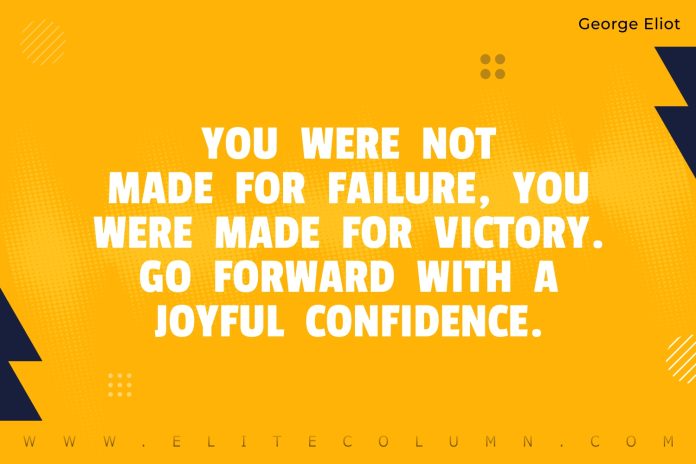 Check out 50 Get Back Up Quotes today.

50 Best Get Back Up Quotes

1. “It is impossible to live without failing at something, unless you live so cautiously that you might as well not have lived at all, in which case you have failed by default.” – J. K. Rowling

2. “Don’t bury your failures, let them inspire you.” – Robert Kiyosaki

3. “It’s fine to celebrate success but it is more important to heed the lessons of failure.” – Bill Gates

4. “You were not made for failure, you were made for victory. Go forward with a joyful confidence.” – George Eliot

5. “Failures are finger posts on the road to achievement.” – C. S. Lewis

6. “An inventor fails 999 times, and if he succeeds once, he’s in. He treats his failures simply as practice shots.” – Charles F. Kettering

8. “Failure is nature’s plan to prepare you for great responsibilities.” – Napoleon Hill

9. “Success consists of going from failure to failure without loss of enthusiasm.” – Winston Churchill

10. “Sometimes by losing a battle you find a new way to win the war.” – Donald Trump

12. “Anyone who has never made a mistake has never tried anything new.” – Albert Einstein

14. “We’re born with success. It is only others who point out our failures, and what they attribute to us as failure.” – Whoopi Goldberg

15. “There is no thing as failure, only learning experiences.” – Anonymous

16. “Failure is the condiment that gives success its flavor.” – Truman Capote

17. “A thinker sees his own actions as experiments and questions–as attempts to find out something. Success and failure are for him answers above all.” – Friedrich Nietzsche

18. “Failure is not the opposite of success, it’s part of success.” – Anonymous

19. “Honesty is the fastest way to prevent a mistake from turning into a failure.” – James Altucher

20. “I can’t give you a sure-fire formula for success, but I can give you a formula for failure: try to please everybody all the time.” – Herbert Bayard Swope

22. “Success is not a good teacher, failure makes you humble.” – Shah Rukh Khan

23. “We need to accept that we won’t always make the right decisions, that we’ll screw up royally sometimes.” – Arianna Huffington

24. “I’ve failed over and over again in my life and that is why I succeed.” – Michael Jordan

25. “The only real mistake is the one from which we learn nothing.” – Henry Ford

27. “You are right, I do fall down a lot. But that wouldn’t be true if I never stood back up.” – Richelle E. Goodrich

28. “Just because you fail once doesn’t mean you’re gonna fail at everything.” – Marilyn Monroe

29. “Success is not final, failure is not fatal: it is the courage to continue that counts.” – Winston Churchill

31. “Only those who dare to fail greatly can ever achieve greatly.” – Robert F. Kennedy

32. “Failure will never overtake me if my determination to succeed is strong enough.” – Og Mandino

33. “Our greatest glory is not in never failing, but in rising every time we fail.” – Confucius

34. “Success is measured by how high you bounce when you hit bottom” – George S. Patton

35. “It is hard to fail, but it is worse never to have tried to succeed.” – Theodore Roosevelt

36. “Every adversity, every failure, every heartache carries with it the seed of an equal or greater benefit.” – Napoleon Hill

37. “Do not be embarrassed by your failures, learn from them and start again.” – Richard Branson

38. “Do not judge me by my successes, judge me by how many times I fell down and got back up again.” – Nelson Mandela

39. “There is no innovation and creativity without failure. Period.” – Brene Brown

40. “It’s failure that gives you the proper perspective on success.” – Ellen DeGeneres

41. “I can accept failure, everyone fails at something. But I can’t accept not trying.” – Michael Jordan

42. “The greatest glory in living lies not in never falling, but in rising every time we fall.” – Ralph Waldo Emerson

43. “When everything seems to be going against you remember that an airplane takes off against the wind, not with it.” – Henry Ford

46. “If you didn’t succeed, it’s just as important to keep in mind that there has never been a success story without failure and lessons along the way.” – Eric Christian

47. “There is no doubt in my mind that there are many ways to be a winner, but there is really only one way to be a loser and that is to fail and not look beyond the failure.” – Kyle Rote Jr

49. “Success is most often achieved by those who don’t know that failure is inevitable.” – Coco Chanel

50. “Everything you want is on the other side of fear.” – Jack Canfield