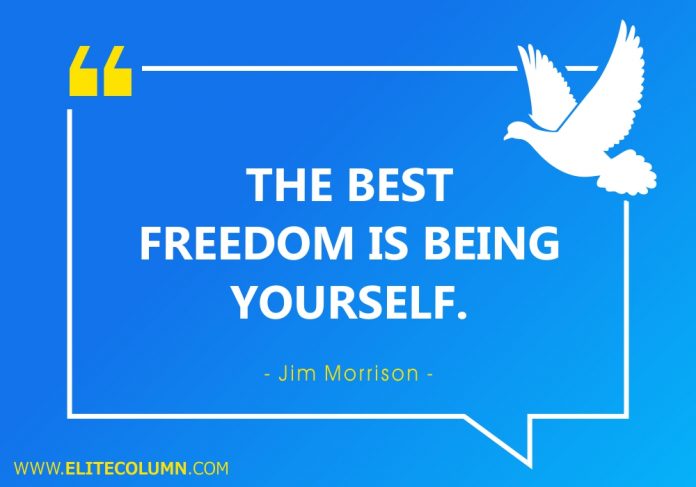 1. “Freedom is being you without anyone’s permission.” – Anonymous

2. “The truth will set you free, but first it will piss you off.” – Joe Klaas

3. “When you know your why and have found your purpose, no one can stop you.” – Avinash VS

4. “The most courageous act is still to think for yourself. Aloud.” – Napoleon Bonaparte

5. “Some tourists think Amsterdam is a city of sin, but in truth it is a city of freedom. And in freedom, most people find sin.” – John Green

6. “Freedom is not worth having if it does not include the freedom to make mistakes.” – Mahatma Gandhi

8. “You wanna fly, you got to give up the shit that weighs you down.” – Toni Morrison

9. “Expose yourself to your deepest fear; after that, fear has no power, and the fear of freedom shrinks and vanishes. You are free.” – Jim Morrison

10. “Those who do not move, do not notice their chains.” – Rosa Luxemburg

11. “The truth will set you free. But not until it is finished with you.” – David Foster Wallace

12. “There was beauty in the idea of freedom, but it was an illusion. Every human heart was chained by love.” – Cassandra Clare

15. “The unhappiest people in this world, are those who care the most about what other people think.” – C. JoyBell C.

16. “Those who deny freedom to others, deserve it not for themselves.” – Abraham Lincoln

18. “We must be free not because we claim freedom, but because we practice it.” – William Faulkner

19. “Witness and stand back from nature, that si the first step to the soul’s freedom.” – Sri Aurobindo

20. “Man is condemned to be free; because once thrown into the world, he is responsible for everything he does. It is up to you to give life a meaning.” – Jean-Paul Sartre

21. “True freedom is impossible without a mind made free by discipline.” – Mortimer J. Adler

23. “No one loses anyone, because no one owns anyone. That is the true experience of freedom: having the most important thing in the world without owning it.” – Paulo Coelho

24. “A man can be himself only so long as he is alone; and if he does not love solitude, he will not love freedom; for it is only when he is alone that he is really free.” – Arthur Schopenhauer

25. “The best freedom is being yourself.” – Jim Morrison

27. “The secret of happiness is freedom, the secret of freedom is courage.” – Carrie Jones

30. “You see, freedom has a way of destroying things.” – Scott Westerfeld

32. “For to be free is not merely to cast off one’s chains, but to live in a way that respects and enhances the freedom of others.” – Nelson Mandela

33. “Letting go gives us freedom, and freedom is the only condition for happiness. If, in our heart, we still cling to anything anger, anxiety, or possessions – we cannot be free.” – Thich Nhat Hanh

34. “Disobedience is the true foundation of liberty. The obedient must be slaves.” – Henry David Thoreau

35. “You can have peace. Or you can have freedom. Don’t ever count on having both at once.” – Robert A. Heinlein

36. “Who is more to be pitied, a writer bound and gagged by policemen or one living in perfect freedom who has nothing more to say?” – Kurt Vonnegut

37. “Better to die fighting for freedom then be a prisoner all the days of your life.” – Bob Marley

38. “A friend is someone who gives you total freedom to be yourself.” – Jim Morrison

39. “The things you own end up owning you. It’s only after you lose everything that you’re free to do anything.” – Chuck Palahniuk

40. “There’s no freedom quite like the freedom of being constantly underestimated.” – Scott Lync

41. “I am no bird; and no net ensnares me: I am a free human being with an independent will.” – Charlotte Bronte

43. “Education is the key to unlock the golden door to freedom.” – George Washington Carver

44. “I have found both freedom and safety in my madness; the freedom of loneliness and the safety from being understood, for those who understand us enslave something in us.” – Kahlil Gibran

45. “We were the people who were not in the papers. We lived in the blank white spaces at the edges of print. It gave us more freedom. We lived in the gaps between the stories.” – Margaret Atwood

47. “Those who would give up essential liberty to purchase a little temporary safety, deserve neither liberty nor safety.” – Benjamin Franklin

48. “Freeing yourself was one thing, claiming ownership of that freed self was another.” – Toni Morrison

49. “A hero is someone who understands the responsibility that comes with his freedom.” – Bob Dylan

50. “He who has overcome his fears will truly be free.” – Aristotle

Thanks for checking out the best Freedom Quotes. Feel free to share the quotes with your friends. Leave a comment below and which are your favourite Freedom Quotes ?