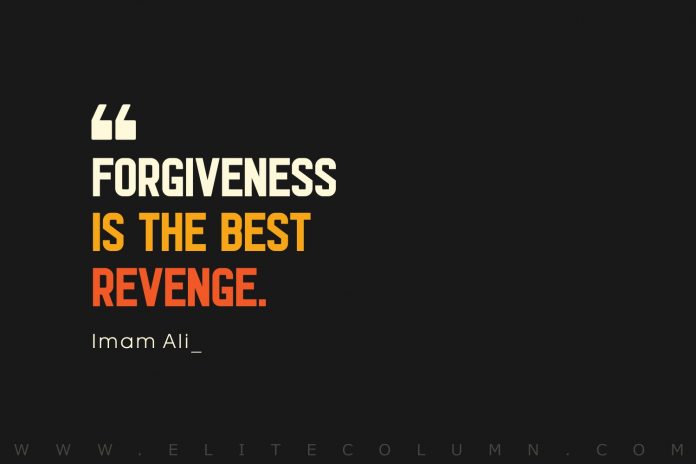 1. “One of the most courageous decisions you’ll ever make is to finally let go of what is hurting your heart and soul.” – Anonymous

2. “Forgiveness is just another name for freedom.” – Byron Katie

3. “Let no man pull you low enough to hate him.” – Martin Luther

4. “Getting over a painful experience is much like crossing monkey bars. You have to let go at some point in order to move forward.” – C.S. Lewis

6.“None of us should be defined by the worst thing we’ve ever done.” – Kevin R. Duncan

10. “The man who forgives is far stronger than the man who fights.” – Nathan Caroll

11. “Hate has caused a lot of problems in this world, but it has not solved one yet.” – Maya Angelou

12. “Forgiveness keeps you from being bound by something the other person might never set right.” – Tony Evans

16. “It is easier to forgive an enemy than a friend.” – William Blake

17. “I don’t think people understand that you can forgive a person and not allow them back into your life. That is possible, very possible.” – Alex Elle

18. “Relationships don’t thrive because the guilty are punished, but because the wounded are merciful.” – Max Lucado

19. “To forgive is to set a prisoner free and discover that the prisoner was you.” – Lewis B. Smedes

20. “I wish for you the wisdom to realize that forgiveness has nothing to do with an apology.” – Steve Maraboli

21. “The weak can never forgive. Forgiveness is the attribute of the strong.” – Mahatma Gandhi

22. “Forgiveness is a funny thing. It warms the heart and cools the sting.” – William Arthur Ward

24. “Today I decided to forgive you. Not because you apologized, or because you acknowledged the pain you caused me, but because my soul deserves peace.” – Najwa Zebian

25. “Forgiveness liberates the soul. It removes fear. That is why it’s such a powerful weapon.” – Nelson Mandela

26. “Forgiveness is the fragrance that the violet sheds on the heel that has crushed it.” – Mark Twain

27. “True forgiveness is when you can say, ‘Thank you for that experience.’” – Oprah Winfrey

29. “Somehow, forgiveness accomplishes miracles that can happen in no other way.” – Gordon B. Hinckley

30. “It’s ok if you fall down and lose your spark. Just make sure that when you get back up, you rise as the whole damn fire.” – Colette Werden

31. “You are allowed to be both a masterpiece and a work in progress, simultaneously.” – Sophia Bush

33. “Forgiveness is not about the past, but the future.” – Anne Michaels

34. “Forgiveness is giving up the hope that the past could have been any different.” – Oprah Winfrey

35. “All friendships of any length are based on a continued, mutual forgiveness. Without tolerance and mercy, all friendships die.” – David Whyte

36. “I believe forgiveness is the best form of love in any relationship. It takes a strong person to say they’re sorry and an even stronger person to forgive.” – Yolanda Hadid

37. “Inner peace can be reached only when we practice forgiveness.” – Gerald Jampolsky

38. “Forgiveness isn’t just a blessing you deliver to another human being. Forgiveness is also a gift you give yourself.” – Robin S. Sharma

39. “Forgiveness is the key to action and freedom.” – Hannah Arendt

40. “Grudges are for those who insist that they are owed something; forgiveness, however, is for those who are substantial enough to move on.” – Criss Jami

41. “Anger makes you smaller, while forgiveness forces you to grow beyond what you are.” –  Cherie Carter-Scott

42. “Forgiveness is not always easy. At times it feels more painful than the wound we suffered, to forgive the one that inflicted it. And yet, there is no peace without forgiveness.” – Marianne Williamson

43. “Forgiveness means it finally becomes unimportant that you hit back.” – Anne Lamott

44. “A marriage is the union of two good forgivers.” – Robert Quillen

45. “Throughout life people will make you mad, disrespect you and treat you bad. Let God deal with the things they do because hate in your heart will consume you too.” – Will Smith

46. “Genuine forgiveness does not deny anger but faces it head-on.” – Alice Duer

48. “Forgiveness does not change the past, but it does enlarge the future.” – Paul Boese

49. “It’s one of the greatest gifts you can give yourself, to forgive. Forgive everybody.” – Maya Angelou