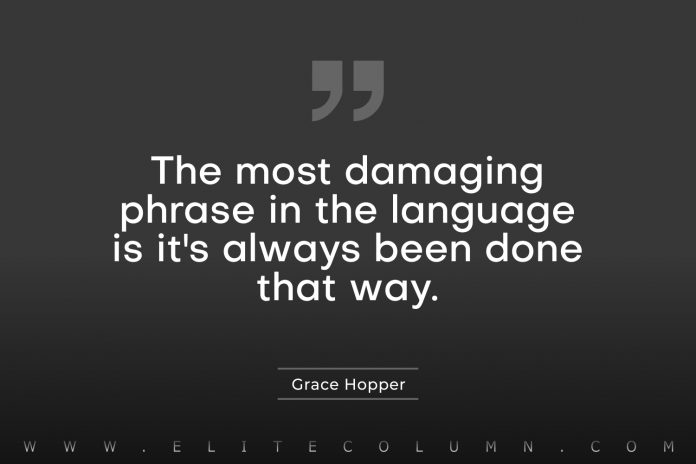 2. “The most damaging phrase in the language is it’s always been done that way.” – Grace Hopper

3. “We sought justice because equal pay for equal work is an American value. That fight took me ten years. It took me all the way to the Supreme Court.” – Lilly Ledbetter

6. “When contemplated in its extreme, almost any power looks dangerous.” – Ruth Bader Ginsburg

8. “I hate to hear you talk about all women as if they were fine ladies instead of rational creatures. None of us want to be in calm waters all our lives.” – Jane Austen

9. “I raise up my voice not so that I can shout, but so that those without a voice can be heard…We cannot all succeed when half of us are held back.” – Malala Yousafzai

13. “If it doesn’t scare you, you’re probably not dreaming big enough.” – Tory Burch

14. “My hope for the future, not just in the music industry, but in every young girl I meet, is that they all realize their worth and ask for it.” – Taylor Swift

17. “A gender-equal society would be one where the word ‘gender’ does not exist: where everyone can be themselves.” – Gloria Steinem

18. “Women’s liberation is the liberation of the feminine in the man and the masculine in the woman.” – Corita Kent

19. “When women leaders like me do not feel the inequality, we tend to forget that something is not working.” – Ida Auken

20. “A society that fails to harness the energy and creativity of its women is at a huge disadvantage in the modern world.” – Tian Wei

21. “Next time you are about to call a little girl bossy, say instead She has executive leadership skills.” – Sheryl Sandberg

22. “We’ve begun to raise daughters more like sons…but few have the courage to raise our sons more like our daughters.” – Gloria Steinem

23. “Culture does not make people. People make culture. If it is true that the full humanity of women is not our culture, then we can and must make it our culture.” – Chimamanda Ngozi Adichie

24. “Find your identity, your true self, and live your mission…Your power is your radical self. Find it.” – Aya Chebbi

25. “If you believe in your idea of change and are willing to work hard, sooner or later that dream will be a reality.” – Naomi Tulay Solanke

26. “An undying spirit is the primary source of help because it is within you.” – Fridah Githuku

27. “Achieving gender equality requires the engagement of women and men, girls and boys. It is everyone’s responsibility.” – Ban Ki Moon

28. “It is time that we all see gender as a spectrum instead of two sets of opposing ideals.”- Emma Watson

29. “How important it is for us to recognize and celebrate our heroes and she-roes!” – Maya Angelou

30. “In the middle east, it is about changing values, such as respect for women.” – Haifaa Al Mansour

32. “Hiring and promoting talented women is the right thing to do for society and  it is an economic imperative.” – Carlos Ghosn

33. “Gender equality is the goal that will help abolish poverty that will create more equal economies, fairer societies, and happier men, women, and children.” – Graça Machel

36. “We know that when women are empowered, they immeasurably improve the lives of everyone around them their families, their communities, and their countries.” – Prince Harry

38. “The only way to solve the problem of women’s subordination is to change people’s mindset and to plant the new idea of gender equality into every mind.” – Qingrong Ma

39. “Gender equality is critical to the development and peace of every nation.” – Kofi Annan

40. “Women must learn to play the game as men do.” – Eleanor Roosevelt

42. “I’m pro everyday equality, everyday celebration, and everyday respect. I feel fortunate that we are not back in the days when men were seen as more powerful.” – Elle Macpherson

44. “These men ask for just the same thing: fairness, and fairness only. This is, so far as in my power, they and all others shall have.” – Abraham Lincoln

45. “Equality is the soul of liberty there is, in fact, no liberty without it.” – Frances Wright

46. “Before God, we are all equally wise, and equally foolish.” – Albert Einstein

47. “Women are more sensitive to other women than men are, and that is a huge advantage when it comes to running a business.” – Juan Carlos Thomas

48. “To see a woman making 5 dollars a day that was able to put a dollar aside to reinvest in her business was pretty remarkable.” – Rachel Robbins

50. “No country can ever truly flourish if it stifles the potential of its women and deprives itself of the contributions of half its citizens.” – Michelle Obama

Thanks for checking out the best Equality Quotes. Feel free to share the quotes with your friends. Leave a comment below and which are your favourite Equality Quotes ?