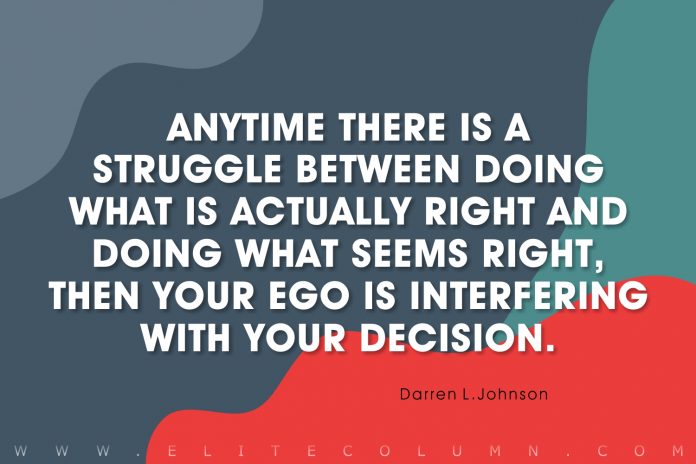 1. “The Universe knows what it’s doing. So don’t develop a big ego, and don’t be afraid.” – Benjamin Hoff

2. “In their dreams at night, people wander around as long as they sleep; just so, they are under the power of the snake Maya, as long as their hearts are filled with ego and duality.” – Sri Guru Granth Sahib

3. “The sickness of my ego has been dispelled, and my pain is over and done.” – Sri Guru Granth Sahib

5. “When your mind becomes fixed on Me, you shall overcome all difficulties by My grace. But, if you do not listen to Me due to ego, you shall perish.” – Ramakrishna

6. “All works are being done by the energy and power of nature, but due to delusion of ego people assume themselves to be the doer.” – Ramakrishna

7. “Anytime there is a struggle between doing what is actually right and doing what seems right, then your ego is interfering with your decision.” – Darren L. Johnson

8. “Life lived in the absence of the psychedelic experience that primordial shamanism is based on is life trivialized, life denied, life enslaved to the ego.” – Terence McKenna

10. “Take no notice of the ego and its activities, but see only the light behind.” – Ramana Maharshi

12. “The ego does not, cannot live in the present, because the present is real and the ego is false – they never meet.” – Osho

13. “Remove the Ego and Avidya (Ignorance) is gone. Look for it, the ego vanishes and the real self alone remains.” – Ramana Maharshi

14. “Your ego is just an idea implanted in your mind. It is poisonous. Your ego keeps driving you madder and madder.” – Osho

15. “Ego is simply an idea of who you are that you carry around with you.” – Wayne Dyer

17. “Make your ego porous. Will is of little importance, complaining is nothing, fame is nothing. Openness, patience, receptivity, solitude is everything.” – Rainer Maria Rilke

18. “Negative states of mind, such as anger, resentment, fear, envy, and jealousy, are products of the ego.” – Eckhart Tolle

19. “Anytime there is a struggle between doing what is actually right and doing what seems right, then your ego is interfering with your decision.” – Darren Johnson

20. “The whole business is built on ego, vanity, self-satisfaction, and it’s total crap to pretend it’s not.” – George Michael

21. “The ego is nothing other than the focus of conscious attention.” – Alan Watts

22. “The world is burning in the fire of desire, in greed, arrogance and excessive ego.” – Sri Guru Granth Sahib

23. “With the disappearance of God the Ego moves forward to become the sole divinity.” – Dorothee

24. “Intolerance itself is a form of egoism, and to condemn egoism intolerantly is to share it.” – George Santayana

25. “Ego has a voracious appetite, the more you feed it, the hungrier it gets.” – Nathaniel Bronner Jr.

26. “Ego is simply an idea of who you are that you carry around with you.” – Wayne Dyer

27. “The ego is willing but the machine cannot go on. It’s the last thing a man will admit, that his mind ages.” – Will Durant

29. “If due to ego you think: I shall not fight; this resolve of yours is vain. Your own nature will compel you.” – Bhagavad Gita

32. “Confronted by outstanding merit, there is no way of saving one’s ego except by love.” – Johann Wolfgang von Goethe

34. “Give up all bad qualities in you, banish the ego and develop the spirit of surrender. You will then experience Bliss.” – Sathya Sai Baba

35. “The great corrupter of public man is the ego…. Looking at the mirror distracts one’s attention from the problem.” – Dean Acheson

36. “If you want to reach a state of bliss, then go beyond your ego and the internal dialogue.” – Deepak Chopra

37. “Egotism is the source and summary of all faults and miseries.” – Thomas Carlyle

38. “It’s very clearly stated in the film: You make your own choices, and what you’re always fighting is ego.” – Taylor Hackford

39. “In the East, all the religions preach egolessness. So in the East, everybody is against the ego from the very beginning.” – Rajneesh

40. “My performances have finally caught up with my ego.” – Ato Boldon

41. “Ego is one of the biggest weapons that is used to take us down. It’s self-destructive. It’s a problem on all levels – even regular people can have big ego problems.” – Yehuda Berg

42. “Don’t talk about yourself; it will be done when you leave.” – Wilson Mizner

43. “Apology is only egotism wrong side out.” – Oliver Wendell Holmes

44. “The ultimate aim of the ego is not to see something, but to be something.” – Muhammad Iqbal

45. “Whenever I climb I am followed by a dog called ‘Ego’.” – Friedrich Nietzsche

46. “The ego is nothing other than the focus of conscious attention.” – Alan Watts

48. “I think that ego-driven leaders will be a thing of the past because the masses are tired.” – Louis Farrakhan

49. “As the ego cogito, subjectivity is the consciousness that represents something, relates this representation back to itself, and so gathers with itself.” – Martin Heidegger

50. “Many could forgo heavy meals, a full wardrobe, a fine house, etcetera. It is the ego they cannot forgo.” – Mahatma Gandhi

Thanks for checking out the best Ego Quotes. Feel free to share the quotes with your friends. Leave a comment below and which are your favourite Ego Quotes ?