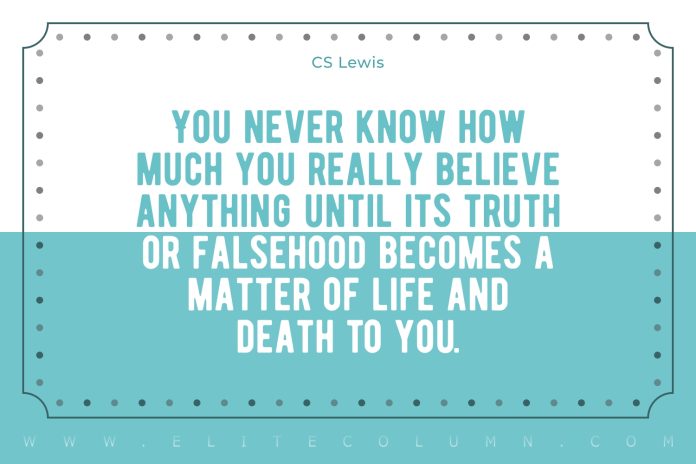 1. “You never know how much you really believe anything until its truth or falsehood becomes a matter of life and death to you.” – CS Lewis

2. “A man can no more diminish God’s glory by refusing to worship Him than a lunatic can put out the sun by scribbling the word ‘darkness’ on the walls of his cell.” – CS Lewis

3. “He died not for men, but for each man. If each man had been the only man made, He would have done no less.” – CS Lewis

4. “The great thing to remember is that though our feelings come and go God’s love for us does not.” – CS Lewis

5. “I think that if God forgives us we must forgive ourselves. Otherwise, it is almost like setting up ourselves as a higher tribunal than Him.” – CS Lewis

6. “Atheism turns out to be too simple. If the whole universe has no meaning, we should never have found out that it has no meaning.”- CS Lewis

8. “Pain insists upon being attended to. God whispers to us in our pleasures, speaks in our consciences, but shouts in our pains. It is his megaphone to rouse a deaf world.” – CS Lewis

9. “Don’t use words too big for the subject. Don’t say infinitely when you mean very otherwise you’ll have no word left when you want to talk about something really infinite.” – CS Lewis

10. “Miracles are a retelling in small letters of the very same story which is written across the whole world in letters too large for some of us to see.” – CS Lewis

11. “The future is something which everyone reaches at the rate of sixty minutes an hour, whatever he does, whoever he is.” – CS Lewis

13. “The task of the modern educator is not to cut down jungles, but to irrigate deserts.” – CS Lewis

15. “Now the trouble about trying to make yourself stupider than you really are is that you very often succeed.” – CS Lewis

16. “I know now, Lord, why you utter no answer. You are yourself the answer. Before your face questions die away. What other answer would suffice?” – CS Lewis

17. “There was a boy called Eustace Clarence Scrubb, and he almost deserved it.” – CS Lewis

18. “God allows us to experience the low points of life in order to teach us lessons that we could learn in no other way.” – CS Lewis

19. “When we lose one blessing, another is often most unexpectedly given in its place.” – CS Lewis

21. “A proud man is always looking down on things and people and, of course, as long as you are looking down, you cannot see something that is above you.” – CS Lewis

22. “Write about what really interests you, whether it is real things or imaginary things, and nothing else.” – CS Lewis

23. “It is when we notice the dirt that God is most present in us; it is the very sign of His presence.” – CS Lewis

26. “Nothing you have not given away will ever really be yours.” – CS Lewis

27. “Christianity, if false, is of no importance, and if true, of infinite importance, the only thing it cannot be is moderately important.” – CS Lewis

28. “We may ignore, but we can nowhere evade the presence of God. The world is crowded with Him. He walks everywhere incognito.” – CS Lewis

29. “There are far, far better things ahead than any we leave behind.” – CS Lewis

30. “You can never get a cup of tea large enough or a book long enough to suit me.” – CS Lewis

31. “I believe in Christianity as I believe that the sun has risen: not only because I see it, but because by it I see everything else.” – CS Lewis

32. “Love is not affectionate feeling, but a steady wish for the loved person’s ultimate good as far as it can be obtained.” – CS Lewis

33. “It is a good rule after reading a new book, never to allow yourself another new one till you have read an old one in between.” – CS Lewis

34. “Some day you will be old enough to start reading fairy tales again.” – CS Lewis

38. “We are not necessarily doubting that God will do the best for us; we are wondering how painful the best will turn out to be.” – CS Lewis

39. “I have learned now that while those who speak about one’s miseries usually hurt, those who keep silence hurt more.” – CS Lewis

40. “God can’t give us peace and happiness apart from Himself because there is no such thing.” – CS Lewis

41. “The Christian does not think God will love us because we are good, but that God will make us good because He loves us.” – CS Lewis

42. “I can’t imagine a man really enjoying a book and reading it only once.” – CS Lewis

43. “Love is something more stern and splendid than mere kindness.” – CS Lewis

44. “Education without values, as useful as it is, seems rather to make man a more clever devil.” – CS Lewis

45. “What you see and what you hear depends a great deal on where you are standing. It also depends on what sort of person you are.” – CS Lewis

46. “Crying is all right in its way while it lasts. But you have to stop sooner or later, and then you still have to decide what to do.” – CS Lewis

48. “If we find ourselves with a desire that nothing in this world can satisfy, the most probable explanation is that we were made for another world.” – CS Lewis

Thanks for checking out the best Get CS Lewis Quotes. Feel free to share the quotes with your friends. Leave a comment below and which are your favourite CS Lewis Quotes ?