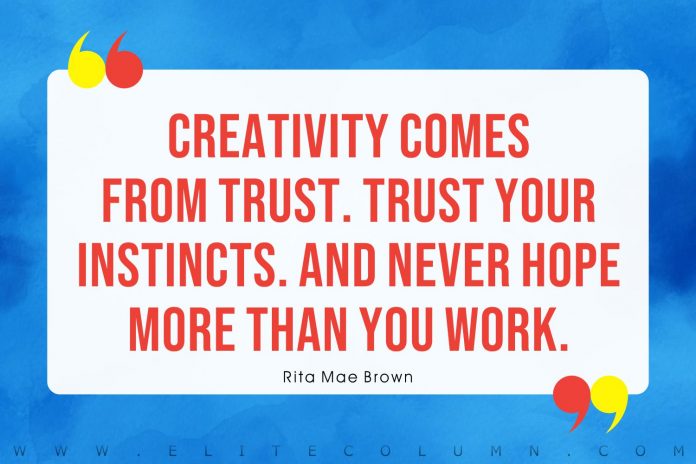 1. “Creativity is the ability to introduce order into the randomness of nature.” – Eric Hoffer

4. “Creativity is piercing the mundane to find the marvelous.” – Bill Moyers

6. “Creativity – like human life itself – begins in darkness.” – Julia Cameron

7. “Creativity is a natural extension of our enthusiasm.” – Earl Nightingale

8. “Creativity requires the courage to let go of certainties.”- Erich From

9. “I saw the angel in the marble and carved until I set him free.” – Michelangelo

10. “Creativity is the residue of time wasted.”- Albert Einstein

11. “Writing down your goals on a piece of paper is the first step to getting anything done.” – Avinash VS

13. “Creativity is one of the highest transmissions of love.” – Suzy Kassem

15. “If you don’t see the book you want on the shelf, write it.”- Beverly Cleary

16. “Absurdity and anti-absurdity are the two poles of creative energy.”- Karl Lagerfeld

19. “Our most valuable resources – creativity, communication, invention, and reinvention – are, in fact, unlimited.”- David Grinspoon

20. “Creativity involves breaking out of established patterns in order to look at things in a different way.”- Edward de Bono

22. “Creativity is an advertising agency’s most valuable asset, because it is the rarest.” –  Jef I. Richards

23. “The urge to destroy is also a creative urge.” – Mikhail Bakunin

24. “Make an empty space in any corner of your mind, and creativity will instantly fill it.” – Dee Hock

27. “If you want creative workers, give them enough time to play.” – John Cleese

28. “There is no healthier drug than creativity.” – Nayyirah Waheed

29. “There is no innovation and creativity without failure. Period.”- Brene Brown

30. “Creativity is a gift. It doesn’t come through if the air is cluttered.” – John Lennon

32. “If you’re not prepared to be wrong, you’ll never come up with anything original.” –  Ken Robinson

33. “Self-awareness is one of the biggest enemies to creativity.” – Ted Dwane

34. “Solitude is creativity’s best friend, and solitude is refreshment for our souls.” – Naomi Judd

35. “Thank goodness I was never sent to school; it would have rubbed off some of the originality.” – Beatrix Potter

36. “That’s the great secret of creativity. You treat ideas like cats: you make them follow you.” – Ray Bradbury

37. “The chief enemy of creativity is ‘good’ sense.” – Pablo Picasso

38. “Nothing prompts creativity like poverty, a feeling of hopelessness, and a bit of panic.” – Catherine Tate

39. “Creative people are often found either disagreeable or intimidating by mediocrities.”- Criss Jami

40. “Creativity arises from our ability to see things from many different angles.” – Keri Smith

42. “Creativity thrives where its roots are crowded.”- Ozzie Zehner

43. “Mystery is at the heart of creativity. That, and surprise.” – Julia Cameron

44. “Variety is lost. Diversity is lost. Creativity is lost in our inability to make love with the world.” – Terry Tempest Williams

45. “Creativity can be described as letting go of certainties.” – Gail Sheehy

46. “Creativity comes from a conflict of ideas.” – Donatella Versace

48. “It’s impossible to explain creativity. It’s like asking a bird, ‘How do you fly?’ You just do.”- Eric Jerome Dickey

49. “I don’t believe there’s a cap on creativity and passion.” – Anonymous

50. “I can tell you, without diversity, creativity remains stagnant.” – Edward Enninful