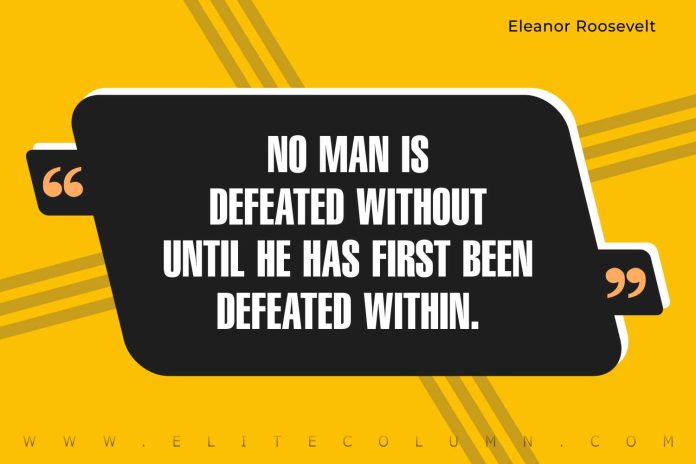 Check out 50 Bounce Back Quotes today.

1. “It is impossible to live without failing at something, unless you live so cautiously that you might as well not have lived at all, in which case you have failed by default.” – J.K. Rowling

2. “Anyone who attempts is not a failure.” – Sarah Dessen

3. “The master has failed more times than the beginner has tried.” – Stephen McCranie

4. “Failure is the condiment that gives success its flavor.” – Truman Capote

7. “If you set your goals ridiculously high and it’s a failure, you will fail above everyone else’s success.” – James Cameron

8. “A common mistake that people make when trying to design something completely foolproof is to underestimate the ingenuity of complete fools.” – Douglas Adams

9. “Failure isn’t fatal, but failure to change might be.” – John Wooden

10. “I’ve come to believe that all my past failure and frustrations were actually laying the foundation for the understandings that have created the new level of living I now enjoy.” – Anthony Robbins

11. “Failure after long perseverance is much grander than never to have a striving good enough to be called a failure.” – George Eliot

12. “A man may fall many times, but he won’t be a failure until he says that someone pushed him.” – Elmer G. Letterman

13. “A life spent making mistakes is not only more honorable but more useful than a life spent in doing nothing.” – George Bernard Shaw

14. “It’s fine to celebrate success but it is more important to heed the lessons of failure.” – Bill Gates

15. “Failure is an attitude, not an outcome.” – Harvey MacKay

16. “Doubt kills more dreams than failure ever will.” – Suzy Kassem

17. “Do not be embarrassed by your failures, learn from them and start again.” – Richard Branson

18. “Only those who dare to fail greatly can ever achieve greatly.” – Robert F. Kennedy

19. “I don’t believe in failure. It is not failure if you enjoyed the process.” – Oprah Winfrey

20. “There is no such thing as failure, only results.” – Tony Robbins

21. “Winners are not afraid of losing. But losers are. Failure is part of the process of success. People who avoid failure also avoid success.” – Robert T. Kiyosaki

23. “Success is not a good teacher, failure makes you humble.” – Shah Rukh Khan

24. “To be wrong is nothing unless you continue to remember it.” – Confucius

25. “Anyone who has never made a mistake has never tried anything new.” – Albert Einstein

26. “Try a thing you haven’t done three times. Once, to get over the fear of doing it. Twice, to learn how to do it. And a third time to figure out whether you like it or not.” – Virgil Thomson

28. “Failure is nature’s plan to prepare you for great responsibilities.” – Napoleon Hill

30. “A man must be big enough to admit his mistakes, smart enough to profit from them, and strong enough to correct them.” – John C. Maxwell

31. “There are no failures just experiences and your reactions to them.” – Tom Krause

33. “Success is the ability to go from failure to failure without losing your enthusiasm.” – Winston Churchill

34. “Life is full of screwups. You’re supposed to fail sometimes. It’s a required part of the human existance.” – Sarah Dessen

35. “I can’t give you a sure-fire formula for success, but I can give you a formula for failure: try to please everybody all the time.” – Herbert Bayard Swope

37. “Just because you fail once doesn’t mean you’re gonna fail at everything.” – Marilyn Monroe

38. “The only real mistake is the one from which we learn nothing.” – Henry Ford

40. “It is hard to fail, but it is worse never to have tried to succeed.” – Theodore Roosevelt

42. “I can accept failure, everyone fails at something. But I can’t accept not trying.” – Michael Jordan

43. “No man ever achieved worth-while success who did not, at one time or other, find himself with at least one foot hanging well over the brink of failure.“ – Napoleon Hill

45. “The only real failure in life is not to be true to the best one knows.” – Buddha

46. “An inventor fails 999 times, and if he succeeds once, he’s in. He treats his failures simply as practice shots.” – Charles F. Kettering

47. “Our greatest glory is not in never failing, but in rising every time we fail.” – Confucius

49. “When I was young, I observed that nine out of ten things I did were failures. So I did ten times more work.” – George Bernard Shaw

50. “A man may fail many times but he isn’t a failure until he begins to blame somebody else.” – John Burroughs