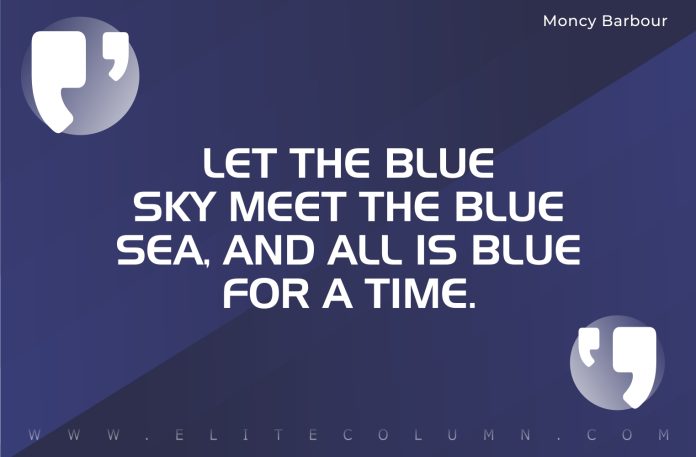 1. “But my deepest and most secret love belongs to the fair haired and the blue eyed, the bright children of life, the happy, the charming, and the ordinary.” – Thomas Mann

2. “Blue seems to be overall one of the more positive colors, and a little more serious than yellow.” – David Carson

4. “He battles heart and arm, his own blue sky above him, and his own green land around.” – Henry Halleck

6. “The look of the sky as the day’s blue blood runs out of its cheek.” – Stephen King

7. “I live for those who love me, for those who know me true, for the heaven so blue above me, and the good that I can do.” – George Linnaeus Banks

8. “Blue is the closest color to truth.” – Steven Tyler

9. “I need the shade of blue that rips your heart out. You don’t see that type of blue around here.” – Cath Crowley

10. “Blue is the color of peace. Water is blue. I like the color blue because it just puts me at peace. The patriotic symbol is blue. I just like blue.” – Antonio Brown

14. “Those blue, blue eyes, icy blue, looking back at me as if I could warm them up. They’re pretty powerful, you know, those eyes, pretty beautiful, too.” – Lucy Christopher

15. “You could drown a kitten in her blue eyes.” – Gary Shteyngart

16. “Tall, sandy blonde, with sort of blue eyes, skinny in places, fat in others. An average gal.” – Uma Thurman

17. “My baby lives in shades of blue, blue eyes and jazz and attitude.” – Lana Del Rey

18. “His blue eyes were seas where sorrow sailed.” – Dean Koontz

19. “Those big blue eyes were swimming, and he was afraid that if the first tear fell, he would break and carry her off anywhere she wanted to go.” – Nora Robert

20. “You have to carry so many archetypes as an actor, especially as a blonde-haired, blue-eyed one.” – Kristin Lehman

25. “Blue is the only color which maintains its own character in all its tones. It will always stay blue.” – Raoul Dufy

26. “But never have I been a blue calm sea. I have always been a storm.” – Stevie Nicks

27. “Never has a pigment been better named than ultramarine blue. Fashionable, even today, in its nomenclature! It is ultra in every way.” – Karen Fitzgerald

30. “Midnight blue is the only color that can ever compete with black.” – Christian Dior

31. “Blue suggests the sea and sky, and they, after all, are in actual, visible nature what is most abstract.” – Yves Klein

33. “Where did you get your eyes so blue? Out of the sky as I came through.” – George MacDonald

34. “I ripped through the blue shade of the constraints of color.” – Kazimir Malevich

35. “Almost without exception, blue refers to the domain of abstraction and immateriality.” – Wassily Kandinsky

36. “The sky was a midnight-blue, like warm, deep, blue water, and the moon seemed to lie on it like a water-lily, floating forward with an invisible current.” – Willa Cather

37. “Good things are associated with blue, like clear days, more than singing the blues. Just the word ‘blue’ in the singular is full of optimism and positive connotation to most people.” – David Carson

38. “It was a beautiful bright autumn day, with air like cider and a sky so blue you could drown in it.” – Diana Gabaldon

40. “Blue is, therefore, most suitable as the color of interior life.” – William H. Gass

41. “Blue has no dimensions, it is beyond dimensions.” – Yves Klein

42. “Somewhere over the rainbow, skies are blue, and the dreams that you dare to dream really do come true.” – Judy Garland

43. “But the sky was never quite the same shade of blue again.” – Anne Rice

44. “I held a blue flower in my hand, probably a wild aster, wondering what its name was, and then thought that human names for natural things are superfluous.” – Sally Carrighar

45. “The blue of my eyes is extinguished in this night, the red gold of my heart.” – Georg Trakl

46. “The fading blue of yesterdays sky is reminding of the hopeless love I told the moon about you.” – Laura Chouette

47. “The blue of the sky is one of the most special colors in the world because the color is deep but see-through both at the same time.” – Cynthia Kadohata

48. “Stars are the daisies that begem; The blue fields of the sky.” – David Macbeth Moir

49. “I love the ocean. I’ve always liked the blue, so tranquil and peaceful and gliding. And the fear of it.” – Siouxsie Sioux

50. “Blue color is everlastingly appointed by the deity to be a source of delight.” – John Ruskin

Thanks for checking out the best Blue Quotes. Feel free to share the quotes with your friends. Leave a comment below and which are your favourite Blue Quotes ?