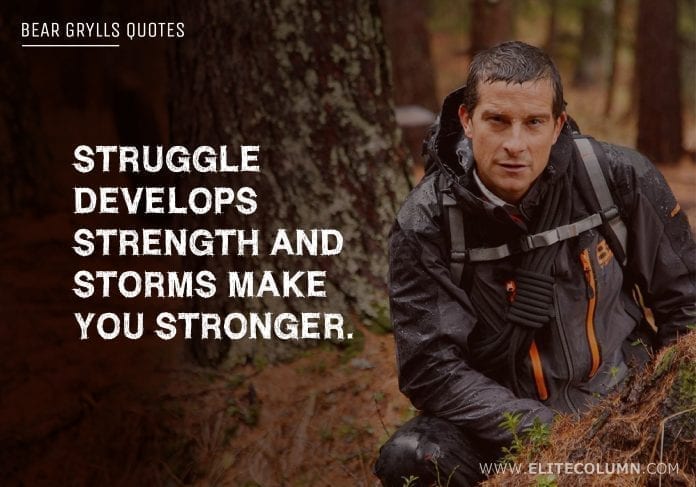 Bear Grylls is best known to TV audiences for Discovery’s Man vs. Wild. Born Edward Michael Grylls and nicknamed Bear by his sister at just a week old, he went on to attend top British boarding school Eton College and founded the famous institution’s first mountaineering club, where he honed the skills that would give him a future in television. After leaving school, Grylls set out on his first Himalayan adventure, spending a number of months hiking in around the mountainous regions of India before eventually following in his father’s footsteps. EliteColumn brings you best Bear Grylls quotes to survive in life. 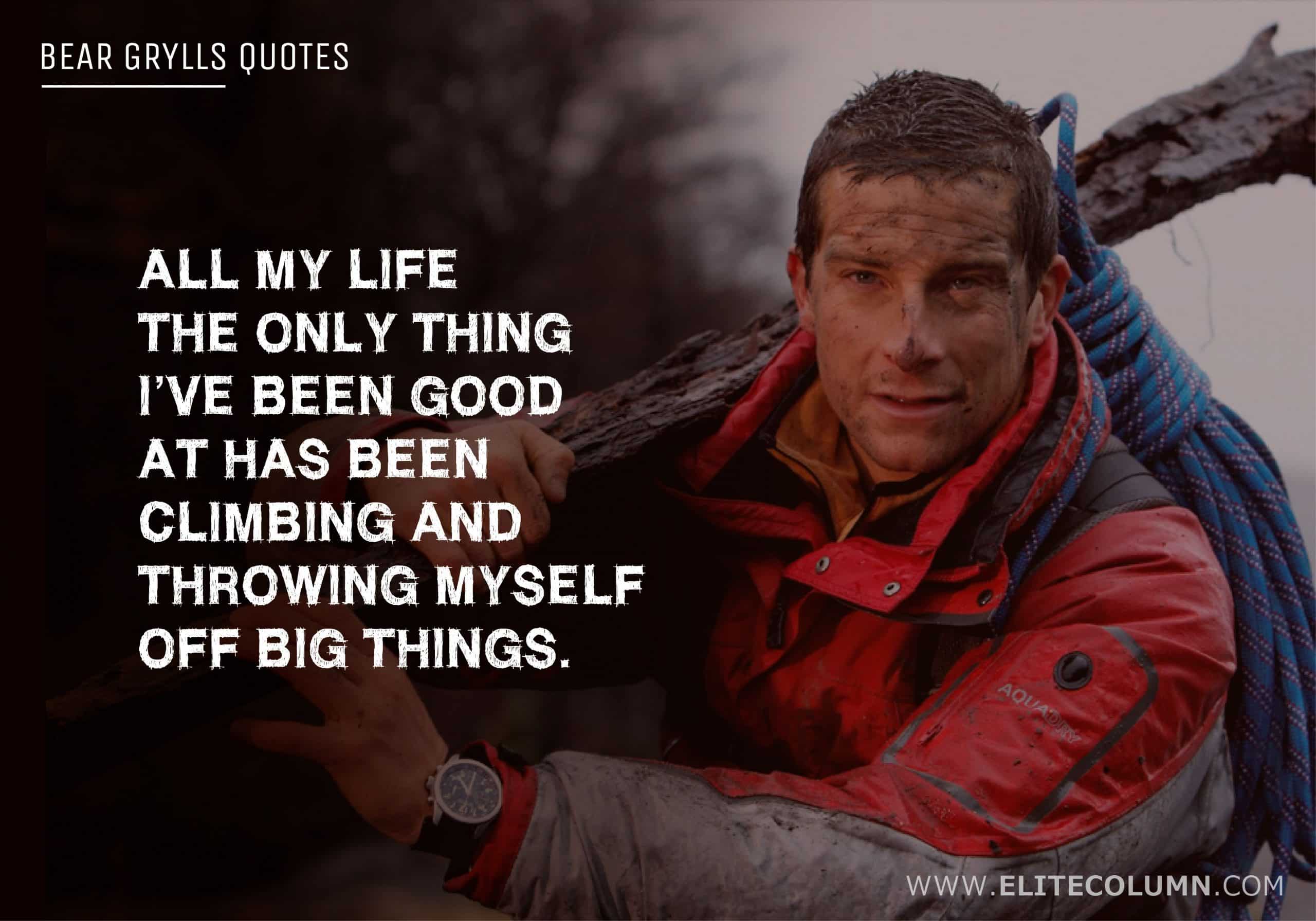 2. “Those who are positive, resourceful, courageous, and determined will emerge.” – Bear Grylls 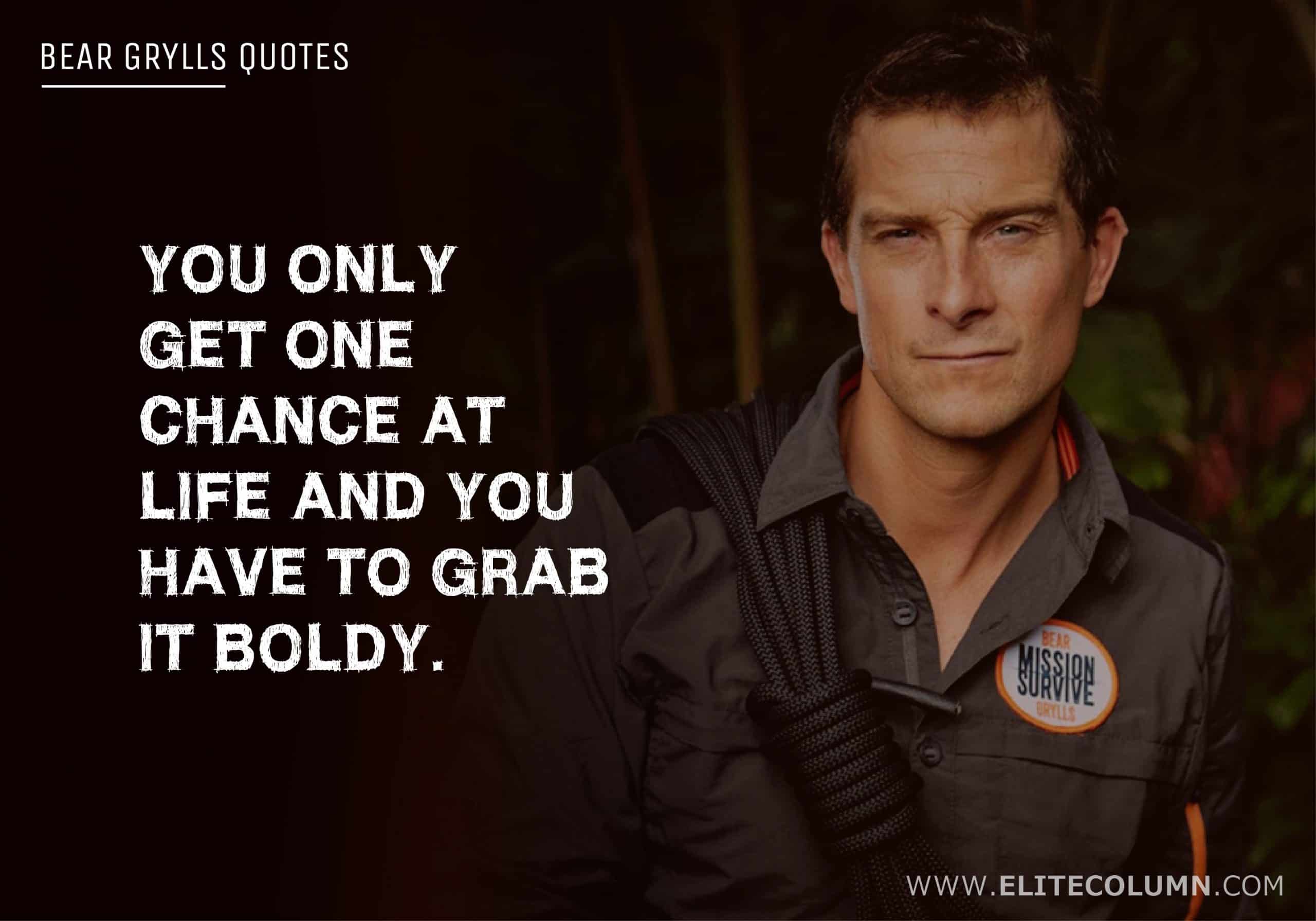 6. “You only get one chance at life and you have to grab it boldy.” – Bear Grylls

7. “Life is about getting up again, dusting yourself down again, learning from the lessons and then pushing on.” – Bear Grylls

8. “Change the way you use your time, and you change your life.” – Bear Grylls

9. “The greatest journeys all start with a single step.” – Bear Grylls

10. “A man’s pride can be his downfall, and he needs to learn when to turn to others for support and guidance.” – Bear Grylls 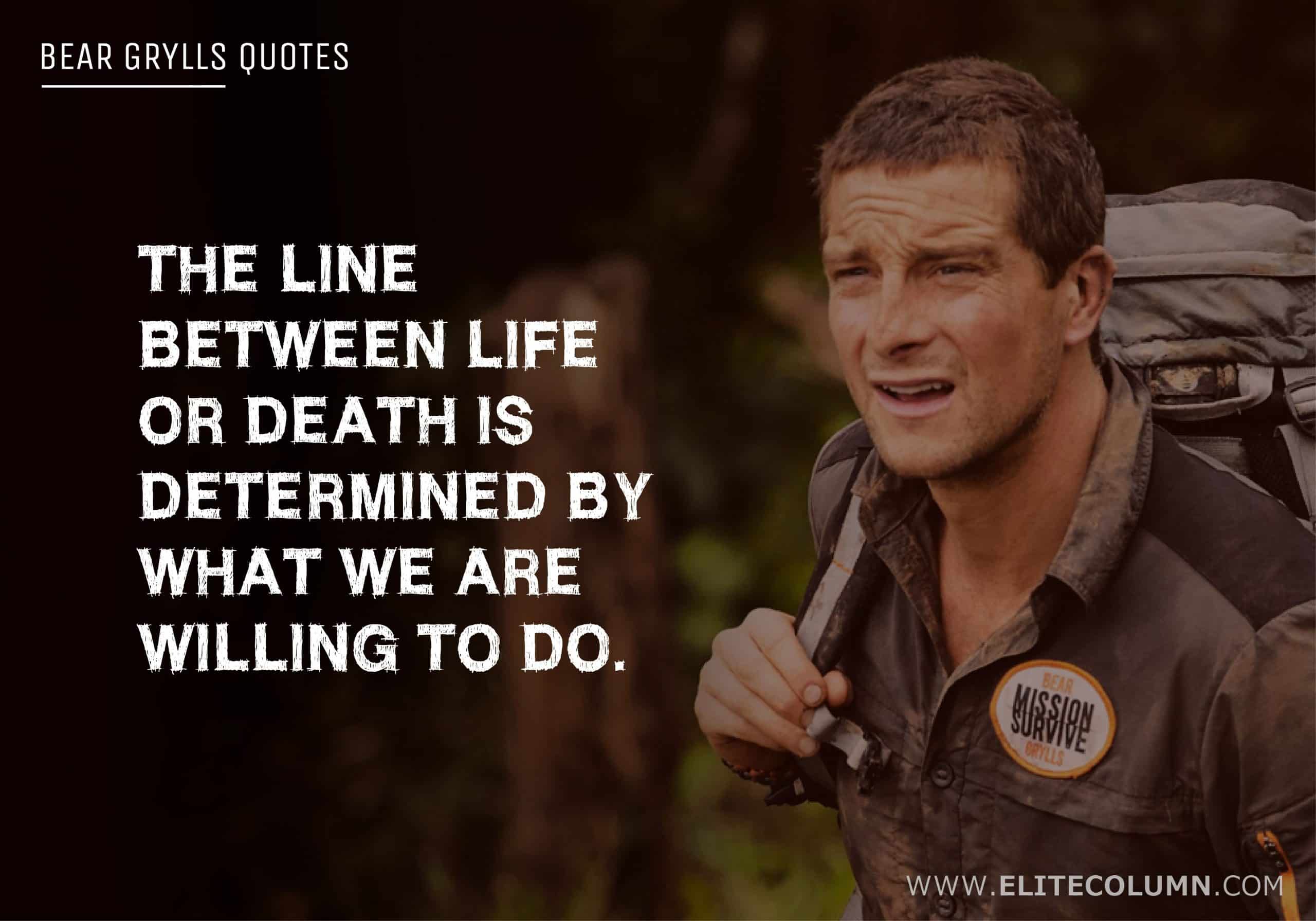 11. “The line between life or death is determined by what we are willing to do.” – Bear Grylls

12. “The only difference between ‘try’ and ‘triumph’ is varying degrees of ‘umph’.” – Bear Grylls

13. “As a society, we’ve become terrified of failure, but you can’t grow without risking it.” – Bear Grylls

14. “Our achievements are generally limited only by the beliefs we impose on ourselves.” – Bear Grylls

15. “One thing I know for sure: it is only by doing what we fear that we can ever truly learn to be brave.” – Bear Grylls 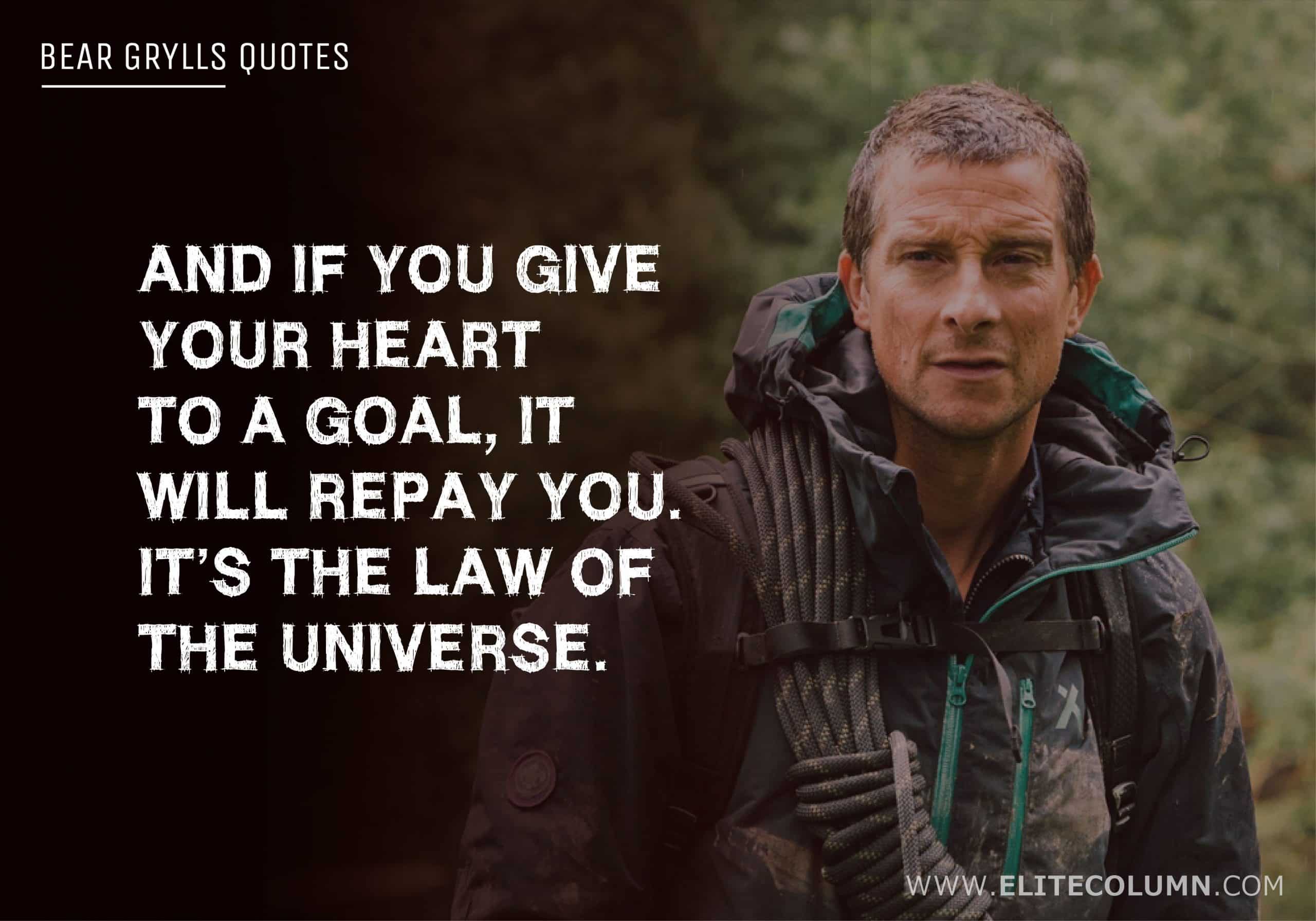 18. “Life doesn’t reward the naturally clever or strong but those who can learn to fight and work hard and never quit.” – Bear Grylls

19. “If you can find a path with no obstacles, it probably doesn’t lead anywhere.” – Bear Grylls 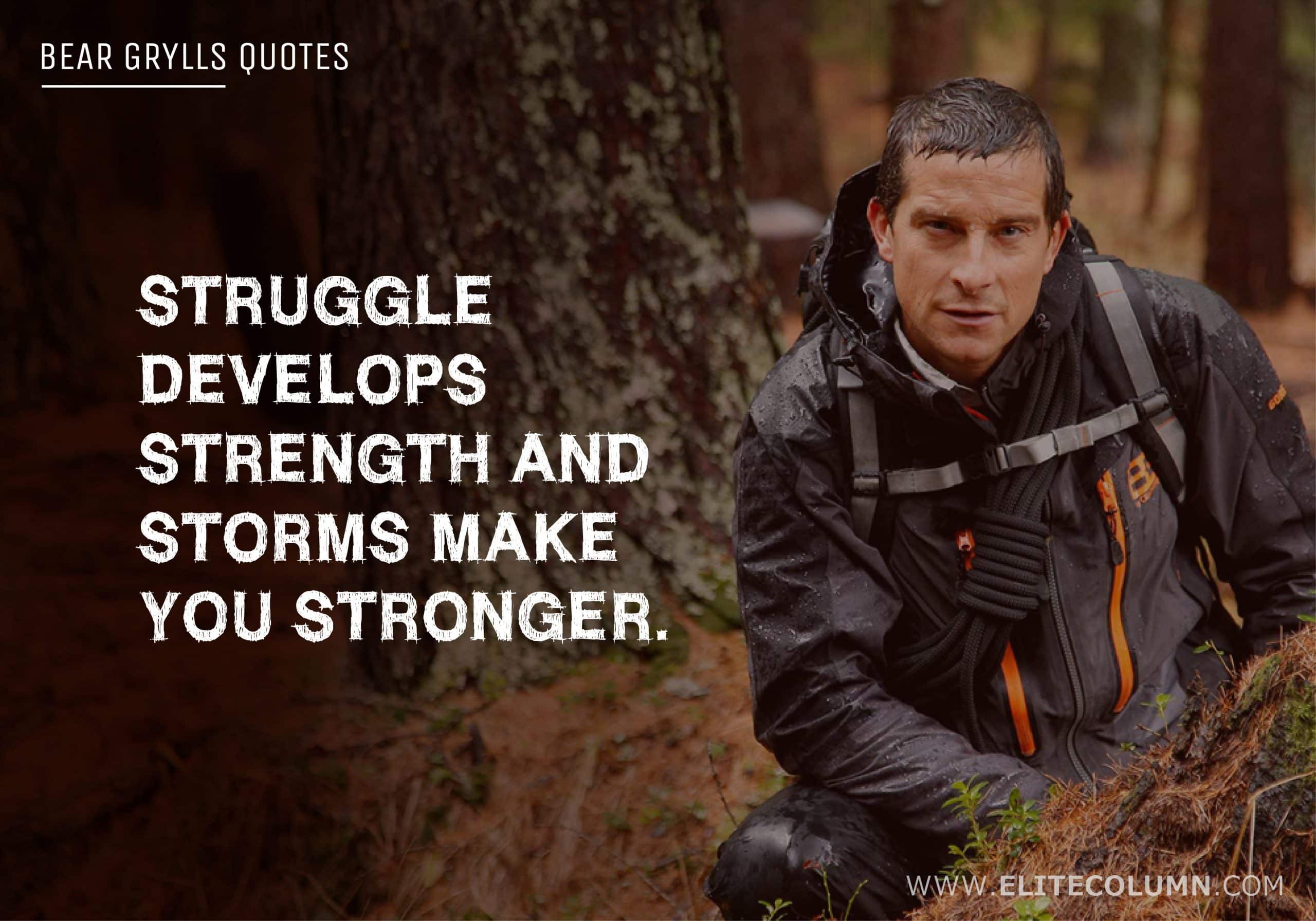 23. “Life is all about our growth, not our trophies.” – Bear Grylls 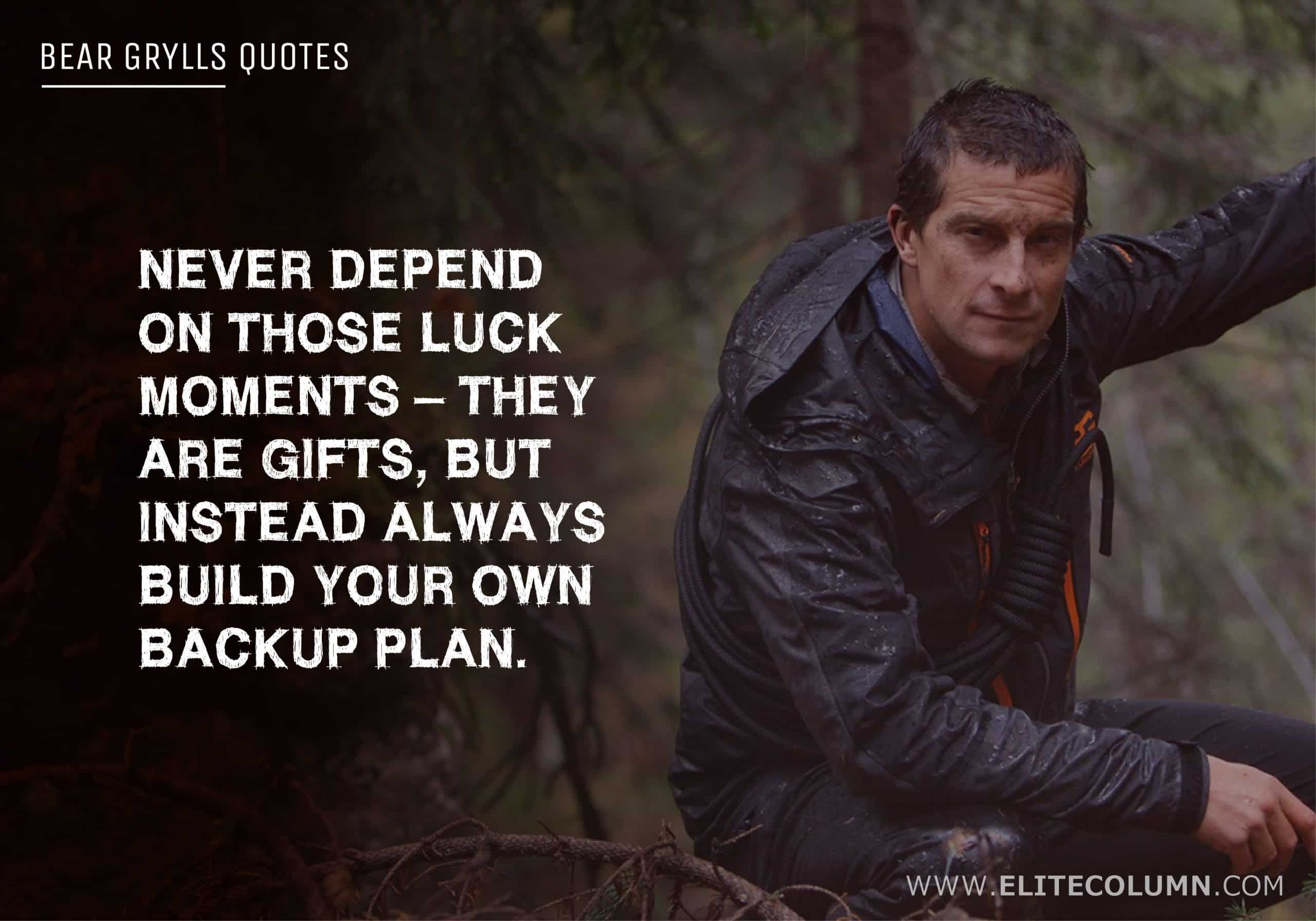 26. “Never depend on those luck moments – they are gifts, but instead always build your own backup plan.” – Bear Grylls

28. “Life rewards the dogged, not the qualified.” – Bear Grylls

29. “Stick to the fight when you’re hardest hit, it’s when things seem worst that you must not quit.” – Bear Grylls 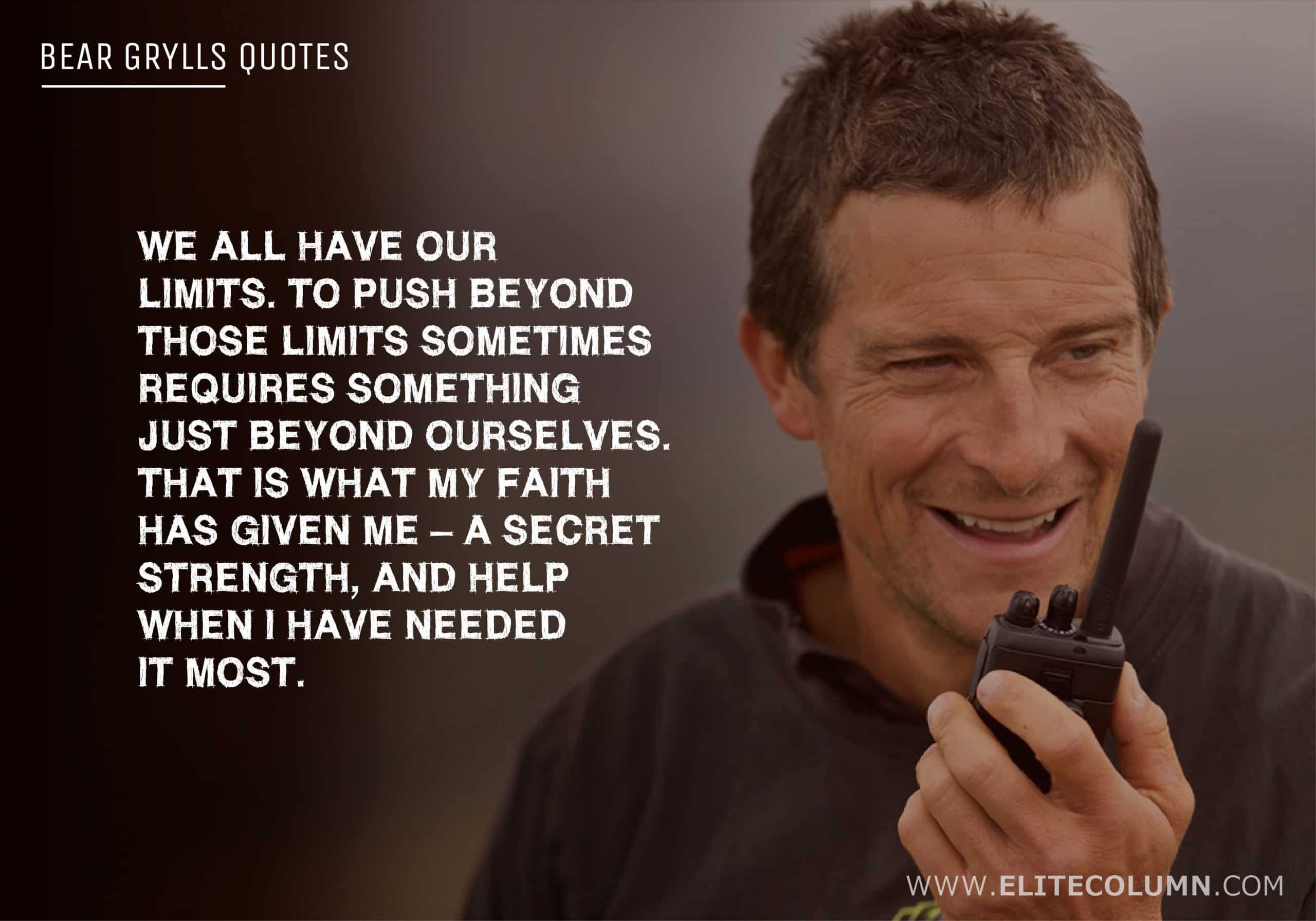 30. “We all have our limits. To push beyond those limits sometimes requires something just beyond ourselves. That is what my faith has given me – a secret strength, and help when I have needed it most.” – Bear Grylls

31. “Don’t be scared to dream big, and don’t be afraid to be close to people. And never give up! It’s the tenacious not the talented that win.” – Bear Grylls 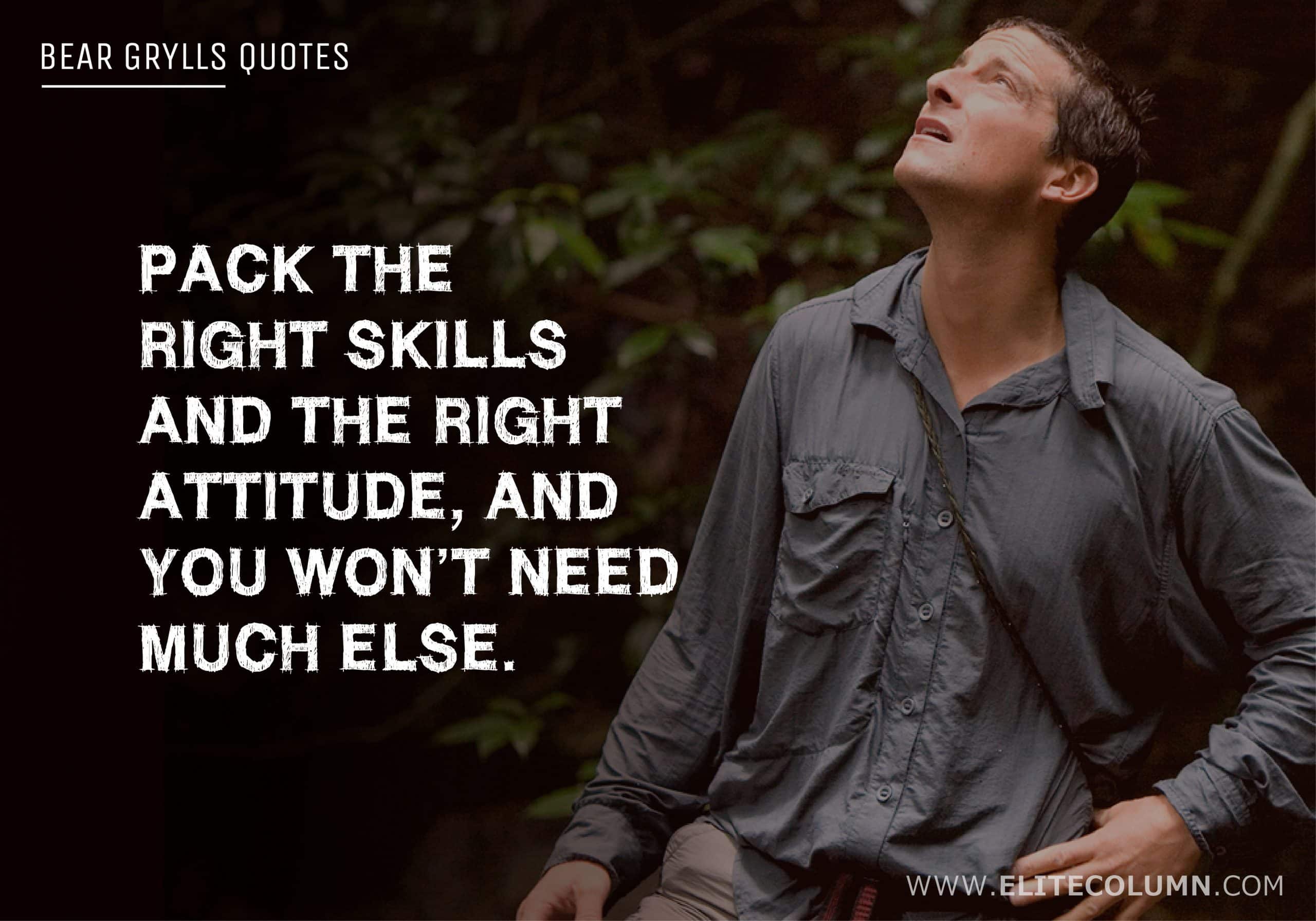 34. “Pack the right skills and the right attitude, and you won’t need much else.” – Bear Grylls

35. “Both faith and fear may sail into your harbor, but only allow faith to drop anchor.” – Bear Grylls

36. “This is your life. Be bold with it. Live it with energy and purpose in the direction that excites you. Listen to your heart, look for your dreams: they are god-inspired.” – Bear Grylls

37. “Sometimes you have just got to tackle these mountains head-on.” – Bear Grylls 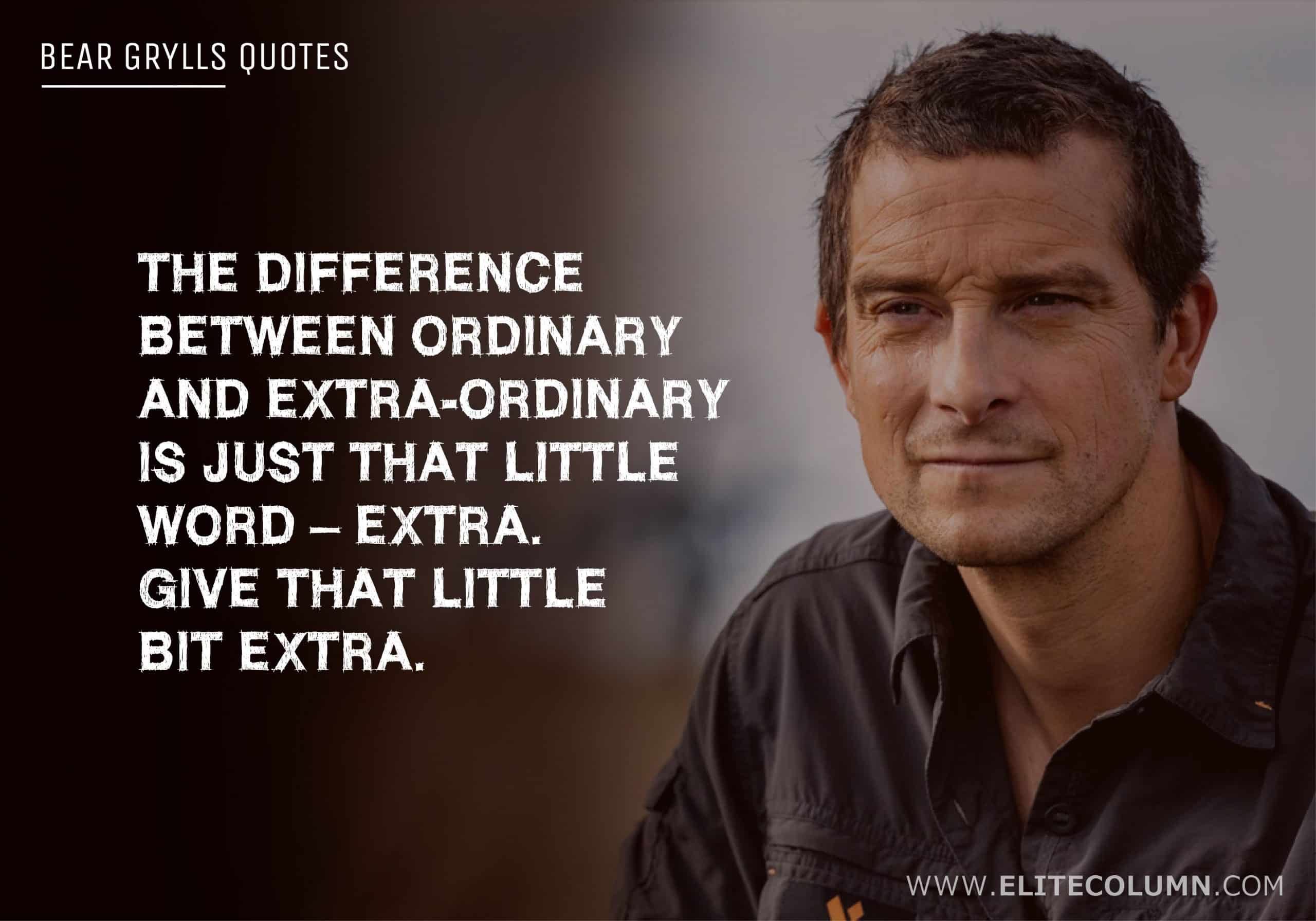 38. “The difference between ordinary and extra-ordinary is just that little word – extra. Give that little bit extra.” – Bear Grylls

39. “You can’t become a decent horseman until you fall off and get up again, a good number of times. There’s life in a nutshell.” – Bear Grylls

40. “Make a little time to be quiet by yourself every day and just be.” – Bear Grylls

41. “It is only when you really step out of your comfort zone that you grow.” – Bear Grylls

42. “Our dreams are just wishes, if we never follow them through with action. And in life, you have got to be able to light your own fire.” – Bear Grylls 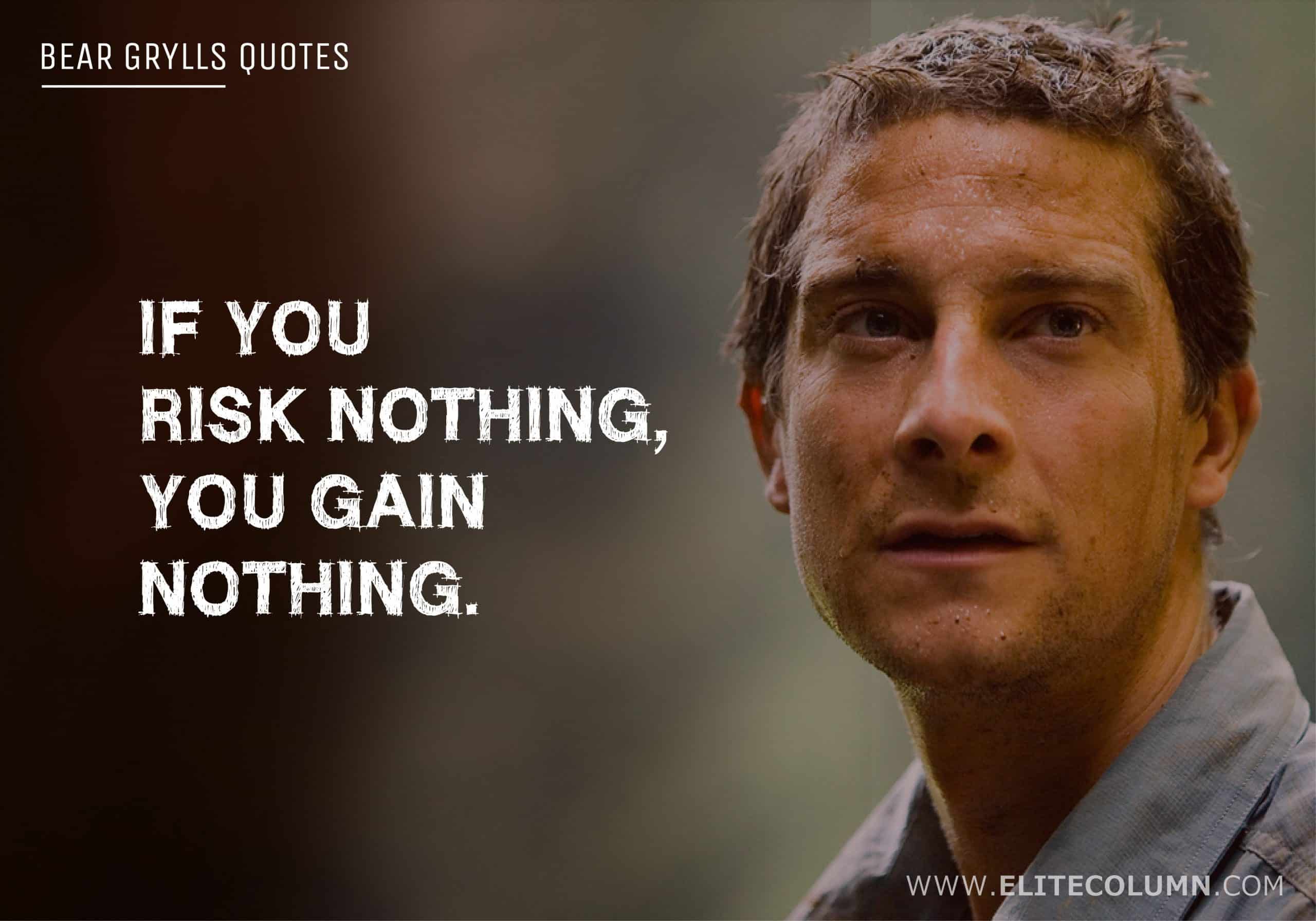 44. “You’re not human if you don’t feel fear. But I’ve learnt to treat fear as an emotion that sharpens me. It’s there to give me that edge for what I have to do.” – Bear Grylls

45. “Weather can kill you so fast. The first priority of survival is getting protection from the extreme weather.” – Bear Grylls

46. “Live a wild, generous full, exciting life – blessing those around you and seeing the good in all.” – Bear Grylls

47. “A wise man knows; learn from others, never get complacent and know where the classic old dangers come from.” – Bear Grylls 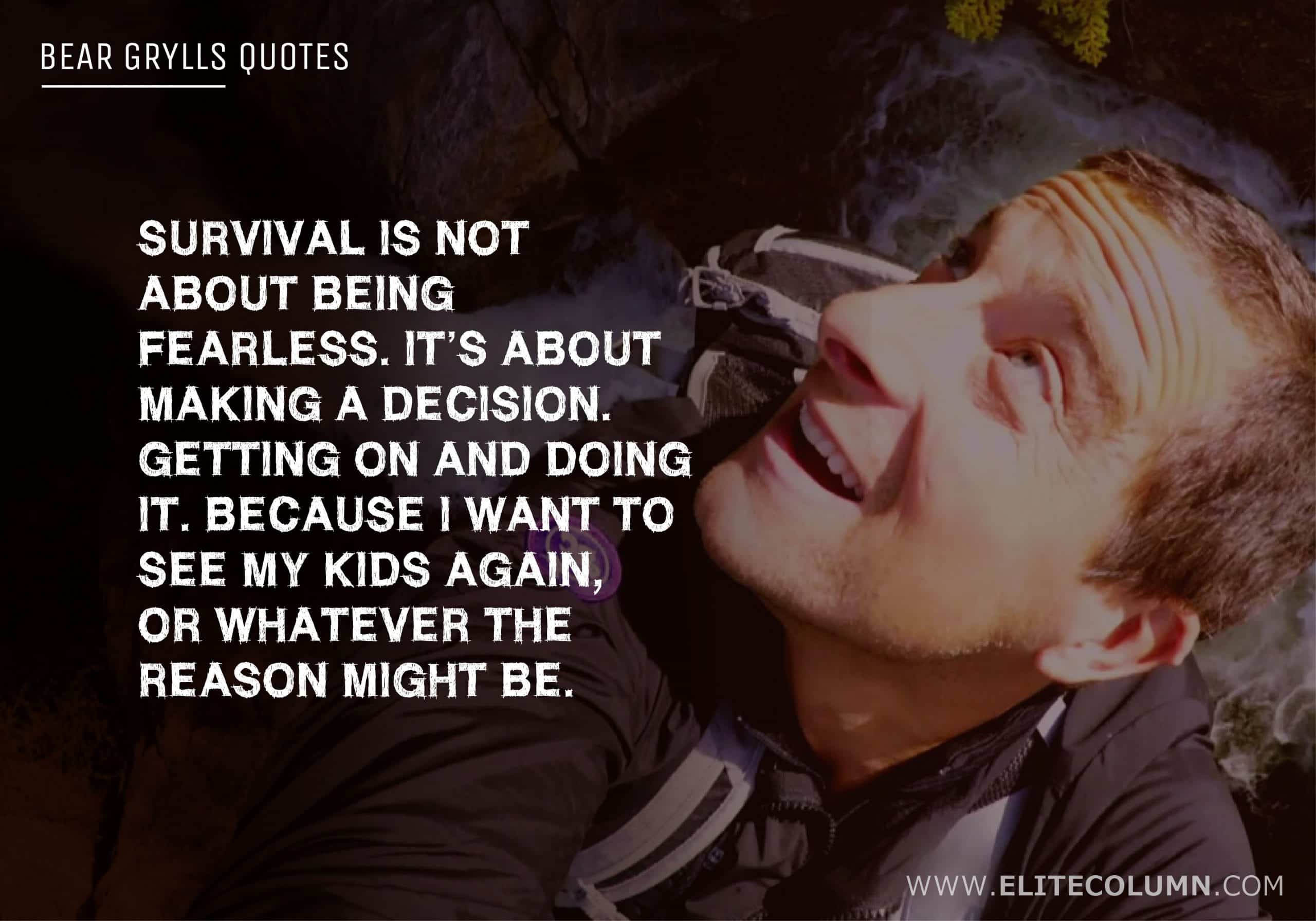 48. “Survival is not about being fearless. It’s about making a decision. Getting on and doing it. Because I want to see my kids again, or whatever the reason might be.” – Bear Grylls

49. “Keep focused on the step in front of you. Nothing else.” – Bear Grylls

50. “Take every chance you get in life. Because some things only happen once.” – Bear Grylls

52. “There’s no magic to running far or climbing Everest. Endurance is mental strength. It’s all about heart.” – Bear Grylls 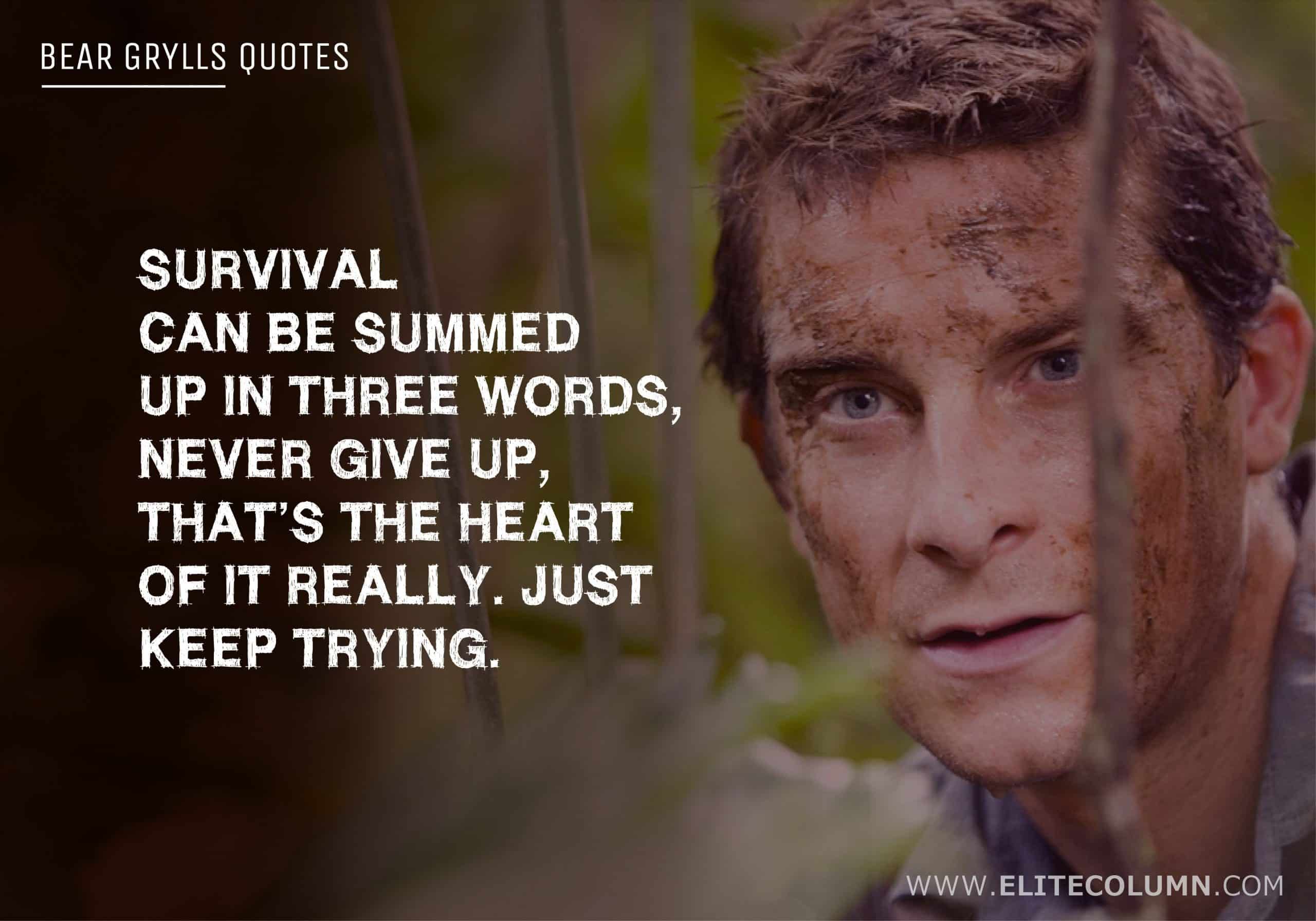 53. “Survival can be summed up in three words, never give up, that’s the heart of it really. Just keep trying.” – Bear Grylls

54. “The storms in life gotta make you stronger, the tougher it gets the more positive you gotta be.” – Bear Grylls

55. “Being brave isn’t the absence of fear. Being brave is having that fear but finding a way through it.” – Bear Grylls

56. “Survival requires us to leave our prejudices at home. It’s about doing whatever it takes – and ultimately those with the biggest heart will win.” – Bear Grylls

57. “You can’t live someone else’s expectations in life. It’s a recipe for disaster.” – Bear Grylls

58. “Nobody wants to end up super rich and famous – but divorced. I’m always clear on that and try to stay on the right side of the line.” – Bear Grylls