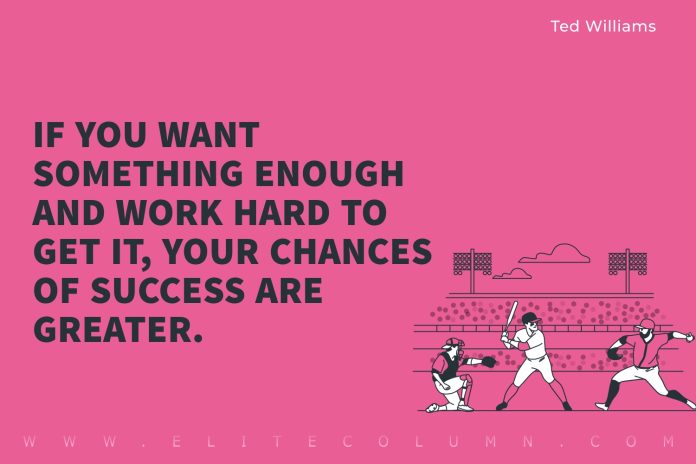 1. “The nice guys are all over there, in seventh place.” – Leo Durocher

2. “Don’t look back. Something might be gaining on you.” – Satchel Paige

3. “If you’re not practicing, somebody else is, somewhere, and he’ll be ready to take your job.” – Brooks Robinson

4. “Baseball is the only field of endeavor where a man can succeed three times out of ten and be considered a good performer.” – Ted Williams

5. “If you want something enough and work hard to get it, your chances of success are greater.” – Ted Williams

6. “No one has come up with a substitute for hard work.” – Ted Williams

8. “If my uniform doesn’t get dirty, I haven’t done anything in the baseball game.” – Rickey Henderson

9. “I’ve found in life the more you practice, the better you get.” – Ted Williams

10. “There are three types of baseball players those who make it happen, those who watch it happen and those who wonder what happens.” – Tommy Lasorda

11. “I want to be remembered as a ballplayer who gave all he had to give.” – Roberto Clemente

12. “Just take the ball and throw it where you want to. Throw strikes. Home plate don’t move.” – Satchel Paige

14. “Baseball is ninety percent mental. The other half is physical.” – Yogi Berra

15. “I’d walk through hell in a gasoline suit to play baseball.” – Pete Rose

16. “Baseball is like church. Many attend, few understand.” – Leo Durocher

17. “Love is the most important thing in the world, but baseball is pretty good, too.” – Yogi Berra

18. “People ask me what I do in winter when there’s no baseball. I’ll tell you what I do. I stare out the window and wait for spring.” – Rogers Hornsby

20. “For all its gentility, its almost leisurely pace, baseball is violence under wraps.” – Willie Mays

21. “The other sports are just sports. Baseball is a love.” – Bryant Gumbel

25. “Baseball is not a sport you can achieve individually.” – Curt Schilling

26. “Deep down, it’s all baseball, no matter what kind of geometrical shape you play it with.” – Vernon D. Burns

27. “The difference between the impossible and the possible lies in a man’s determination.” – Tommy Lasorda

28. “There may be people that have more talent than you, but there is no excuse for anyone to work harder than you do.” – Derek Jeter

30. “A team is where a boy can prove his courage on his own. A gang is where a coward goes to hide.” – Mickey Mantle

31. “There are three things you can do in a baseball game. You can win, or you can lose, or it can rain.” – Casey Stengel

32. “Everybody makes mistakes, that’s why they put erasers on pencils.” – Tommy Lasorda

33. “Baseball is a universal language. Catch the ball, throw the ball, hit the ball.” – Pete Rose

35. “Whether I was in a slump or feeling badly or having trouble off the field, the only thing to do was keep swinging.” – Hank Aaron

37. “You could be a kid for as long as you want when you play baseball.” – Cal Ripken Jr

38. “Baseball is like driving, it’s the one who gets home safely that counts.” – Tommy Lasorda

39. “Slumps are like a soft bed. They’re easy to get into and hard to get out of.” – Johnny Bench

41. “One of the greatest things about baseball is that you do not need much to play. All you need is a bat and a ball not even a glove and a whole lot of imagination.” – David Ortiz

42. “When you step into the batter’s box, have nothing on your mind except baseball.” – Pete Rose

44. “What you are thinking, what shape your mind is in, is what makes the biggest difference of all.” – Willie Mays

45. “Baseball is almost the only orderly thing in a very unorderly world.” – Bill Veeck

47. “There are two theories on hitting the knuckleball. Unfortunately, neither one of them works.” – Charlie Lau

50. “More than any other American sport, baseball creates the magnetic, addictive illusion that it can almost be understood.” – Thomas Boswell

Thanks for checking out the best Baseball Quotes. Feel free to share the quotes with your friends. Leave a comment below and which are your favourite Baseball Quotes ?