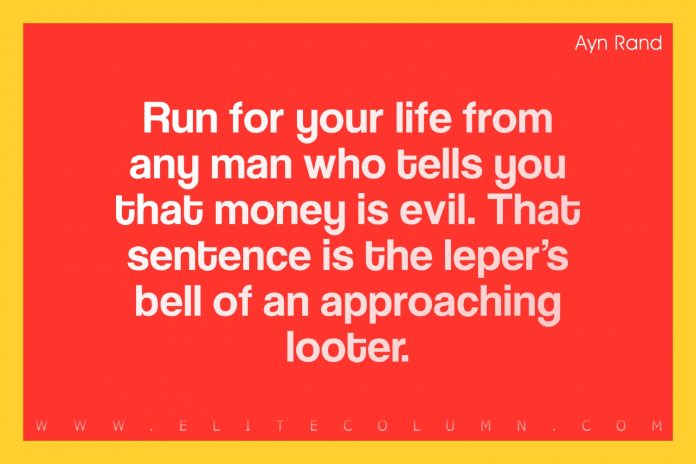 1. “Run for your life from any man who tells you that money is evil. That sentence is the leper’s bell of an approaching looter.” – Ayn Rand

2. “Ask yourself whether the dream of heaven and greatness should be waiting for us in our graves  or whether it should be ours here and now and on this earth.” – Ayn Rand

4. “Man is an end in himself. Romantic love the profound, exalted, lifelong passion that unites his mind and body in the sexual act is the living testimony to that principle.” – Ayn Rand

6. “The concept of free competition enforced by law is a grotesque contradiction in terms.” – Ayn Rand

7. “The smallest minority on earth is the individual. Those who deny individual rights cannot claim to be defenders of minorities.” – Ayn Rand

8. “Life is the reward of virtue. And happiness is the goal and reward of life.” – Ayn Rand

9. “You must be the kind of man who can get things done. But to get things done, you must love the doing, not the secondary consequences.” – Ayn Rand

10. “The upper classes are… a nation’s past; the middle class is its future.” – Ayn Rand

11. “I need no warrant for being, and no word of sanction upon my being. I am the warrant and the sanction.” – Ayn Rand

12. “I swear by my life and my love of it that I will never live for the sake of another man, nor ask another man to live for mine.” – Ayn Rand

14. “The man who does not value himself, cannot value anything or anyone.” – Ayn Rand

15. “You can avoid reality, but you cannot avoid the consequences of avoiding reality.” – Ayn Rand

16. “Learn to value yourself, which means: fight for your happiness.” – Ayn Rand

18. “The evil of the world is made possible by nothing but the sanction [that] you give it.” – Ayn Rand

20. “There’s nothing of any importance except how well you do your work.” – Ayn Rand

21. “An honest man is one who knows that he can’t consume more than he has produced.” – Ayn Rand

23. “All life is a purposeful struggle, and your only choice is the choice of a goal.” – Ayn Rand

26. “Anything may be betrayed, anyone may be forgiven, but not those who lack the courage of their own greatness.” – Ayn Rand

29. “Money is only a tool. It will take you wherever you wish, but it will not replace you as the driver.” – Ayn Rand

31. “Joy is the goal of existence, and joy is not to be stumbled upon, but to be achieved, and the act of treason is to let its vision drown in the swamp of the moment’s torture.” – Ayn Rand

32. “I hope you will understand my hesitation in writing to one whom I admire as the greatest representative of a philosophy to which I want to dedicate my whole life.” – Ayn Rand

33. “Free competition enforced by law” is a grotesque contradiction in terms.” – Ayn Rand

34. “What is greatness? I will answer: it is the capacity to live by the three fundamental values of John Galt: reason, purpose, self-esteem.” – Ayn Rand

36. “Learn to value yourself, which means: to fight for your happiness.” – Ayn Rand

37. “Thanksgiving is a typically American holiday…The lavish meal is a symbol of the fact that abundant consumption is the result and reward of production.” – Ayn Rand

38. “I don’t make comparisons. I never think of myself in relation to anyone else. I just refuse to measure myself as part of anything. I’m an utter egotist.” – Ayn Rand

39. “No one’s happiness but my own is in my power to achieve or to destroy.” – Ayn Rand

40. “Contradictions do not exist. Whenever you think you are facing a contradiction, check your premises. You will find that one of them is wrong.” – Ayn Rand

41. “The ladder of success is the best climbed by stepping on the rungs of opportunity.” – Ayn Rand

42. “A desire presupposes the possibility of action to achieve it; action presupposes a goal which is worth achieving.” – Ayn Rand

43. “Money demands that you sell, not your weakness to men’s stupidity, but your talent to their reason.” – Ayn Rand

45. “Happiness is that state of consciousness which proceeds from the achievement of one’s values.” – Ayn Rand

46. “The problem is not those who dream, but those who can only dream.” – Ayn Rand

48. “I love you so much that nothing can matter to me – not even you…Only my love- not your answer. Not even your indifference.” – Ayn Rand

49. “The purpose of morality is to teach you, not to suffer and die, but to enjoy yourself and live.” – Ayn Rand

51. “Achieving life is not the equivalent of avoiding death.” – Ayn Rand

54. “Love is our response to our highest values and can be nothing else.” – Ayn Rand

55. “To achieve, you need thought. You have to know what you are doing and that’s real power.” – Ayn Rand

Thanks for checking out the best Ayn Rand Quotes. Feel free to share the quotes with your friends. Leave a comment below and which are your favourite Ayn Rand Quotes ?