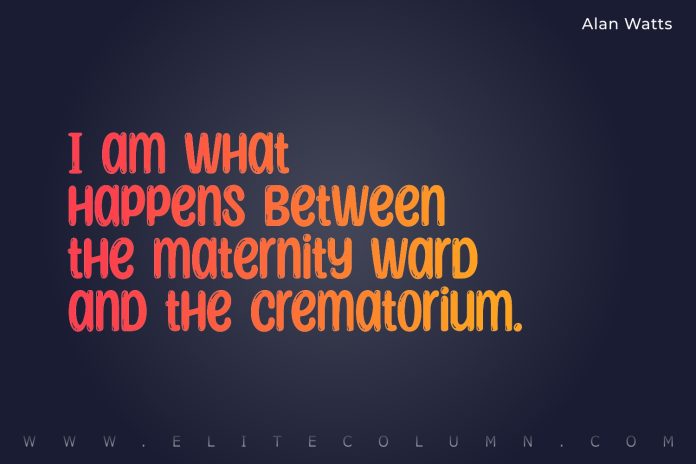 1. “What we have forgotten is that thoughts and words are conventions, and that it is fatal to take conventions too seriously.” – Alan Watts

2. “One is a great deal less anxious if one feels perfectly free to be anxious, and the same may be said of guilt.” – Alan Watts

3. “The world is filled with love-play from animal lust to sublime compassion.” – Alan Watts

4. “But I’ll tell you what hermits realize. If you go off into a far, far forest and get very quiet, you’ll come to understand that you’re connected with everything.” – Alan Watts

5. “So then, the relationship of self to other is the complete realization that loving yourself is impossible without loving everything defined as other than yourself.” – Alan Watts

6. “If you cannot trust yourself, you cannot even trust your mistrust of yourself. So that, without this underlying trust in the whole system of nature, you are simply paralyzed.” – Alan Watts

7. “I am what happens between the maternity ward and the crematorium.” – Alan Watts

8. “You’re under no obligation to be the same person you were five minutes ago.” – Alan Watts

9. “Just as true humor is laughter at oneself, true humanity is knowledge of oneself.” – Alan Watts

10. “No one is more dangerously insane than one who is sane all the time. He is like a steel bridge without flexibility, and the order of his life is rigid and brittle.” – Alan Watts

11. “I find that the sensation of myself as an ego inside a bag of skin is really a hallucination.” – Alan Watts

14. “People become concerned with being more humble than other people.” – Alan Watts

15. “You are that vast thing that you see far, far off with great telescopes.” – Alan Watts

16. “Our pleasures are not material pleasures, but symbols of pleasure attractively packaged but inferior in content.” – Alan Watts

17. “Like love, the light or guidance of truth that influences us exists only in living form, not in principles or rules or expectations or advice, however widely circulated.” – Alan Watts

18. “We know that from time to time, there arise among human beings people who seem to exude love as naturally as the sun gives out heat.” – Alan Watts

19. “No work or love will flourish out of guilt, fear, or hollowness of heart, just as no valid plans for the future can be made by those who have no capacity for living now.” – Alan Watts

20. “I have no other self than the totality of things of which I am aware.” – Alan Watts

21. “Society is our extended mind and body.” – Alan Watts

23. “When you find out that there was never anything in the dark side to be afraid of, nothing is left but to love.” – Alan Watts

24. “Genuine love comes from knowledge, not from a sense of duty or guilt.” – Alan Watts

26. “The more a thing tends to be permanent, the more it tends to be lifeless.” – Alan Watts

27. “I have realized that the past and future are real illusions, that they exist in the present, which is what there is and all there is.” – Alan Watts

31. “Trying to define yourself is like trying to bite your own teeth.” – Alan Watts

32. “Man suffers only because he takes seriously what the gods made for fun.” – Alan Watts

34. “Things are as they are. Looking out into the universe at night, we make no comparisons between right and wrong stars, nor between well and badly arranged constellations.” – Alan Watts

35. “This is the real secret of life to be completely engaged with what you are doing in the here and now. And instead of calling it work, realize it is play.” – Alan Watts

36. “You are an aperture through which the universe is looking at and exploring itself.” – Alan Watts

37. “The only way to make sense out of change is to plunge into it, move with it, and join the dance.” – Alan Watts

38. “Problems that remain persistently insoluble should always be suspected as questions asked in the wrong way.” – Alan Watts

39. “Every intelligent individual wants to know what makes him tick, and yet is at once fascinated and frustrated by the fact that oneself is the most difficult of all things to know.” – Alan Watts

40. “Never pretend to a love which you do not actually feel, for love is not ours to command.” – Alan Watts

41. “The first thing to discover is what indeed you do love, and you will find there is something.” – Alan Watts

42. “Love is not something that is a sort of rare commodity. Everybody has it.” – Alan Watts

43. “This is one of the peculiar problems of our culture that we are terrified of our feelings.” – Alan Watts

46. “Creative people can stimulate creativity in others by osmosis.” – Alan Watts

48. “That, you see, is the most difficult thing to do is to accept oneself completely.” – Alan Watts

49. “Our image of ourselves is completely inaccurate and incomplete.” – Alan Watts

50. “The physical body is the body as examined by others the subtle body is the way you feel yourself.” – Alan Watts