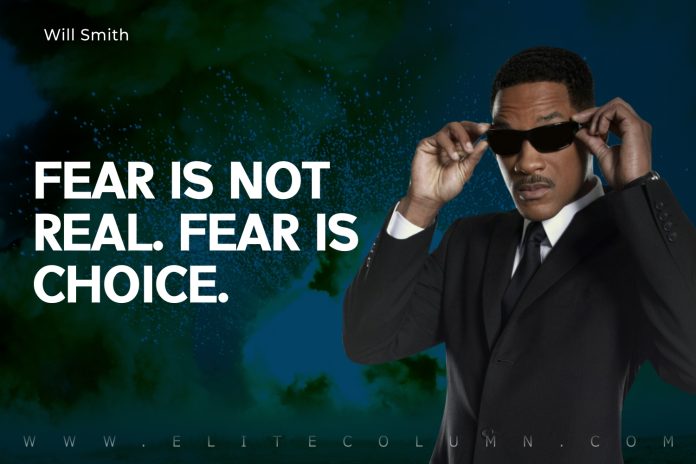 Check out 50 Will Smith Quotes today.

1.”I believe you need to be educated on what you want to do in life, but I don’t believe you necessarily need college to get there.” – Will Smith

2.”There’s two kinds of people in this world. There’s hammers and nails You decide what to be .” – Will Smith

3.”The only thing that has kept me around is my effort.” – Will Smith

4.”Let your smile change the world. Don’t let the world change your smile.” – Will Smith

5.”And where I excel is ridiculous, sickening, work ethic. You know, while the other guy’s sleeping? I’m working.” – Will Smith

6.”If you’re not making someone else ‘s life better, then you’re wasting your time. Your life will become better by making other lives better.” – Will Smith

8.”I don’t make jokes. I just watch the government and report the facts.” – Will Smith

9.”You can’t be scared to die for the truth. The truth is the only thing that is ever going to be constant.” – Will Smith

11.”I want the world to be better because I was here.” – Will Smith

12.”The things that have been most valuable to me I did not learn in school.” – Will Smith

13.”For me, there is nothing more valuable than how people feel in a movie theater about a movie.” – Will Smith

15.”The first time that I performed as an actor was the first day on the set of ‘The Fresh Prince of Bel-Air’.” – Will Smith

16.”Greatness is not this wonderful, esoteric, elusive, god like feature that only the special among us will ever taste, it’s something that truly exists in all of us.” – Will Smith

17.”I wake up every morning believing today is going to be better than yesterday.” – Will Smith

18.”In my mind, I’ve always been an A-list Hollywood superstar. Y’all just didn’t know yet.” – Will Smith

19.”I don’t know what my calling is, but I want to be here for a bigger reason. I strive to be like the greatest people who have ever lived.” – Will Smith

20.”I want to represent the idea that you really can make what you want I believe I can create whatever I want to create.” – Will Smith

21.”When I was growing up, I installed refrigerators in supermarkets. My father was an electrical engineer.” – Will Smith

23.”I’ve trained myself to illuminate the things in my personality that are likable and to hide and protect the things that are less likable.” – Will Smith

24.”I love producing. I am loving doing that. I think that is my most natural space in the business. I just love producing or editing and that’s where I thrive.” – Will Smith

25.”Traditional education is based on facts and figures and passing tests not on a comprehension of the material and its application to your life.” – Will Smith

26.”I’m a student of world religion, so to me, it’s hugely important to have knowledge and to understand what people are doing.” – Will Smith

27.”Being realistic is the quickest path to mediocrity.” – Will Smith

29.”I had to focus and create a character in Bagger Vance, not just do my ‘Will Smith’ thing and get paid.” – Will Smith

30.”My school was 90 percent white, but 90 percent of the kids I played with were black. So I got the best of both worlds. I think that is where my comedy developed.” – Will Smith

33.”You have to believe that something different can happen.” – Will Smith

34. “I think with movies I am really connecting to the Joseph Campbell idea of the collective unconscious.” – Will Smith

36.”God placed the best things in life on the other side of terror.” – Will Smith

38.”Sometimes you have to forget what’s gone, appreciate what still remains, and look forward to what’s coming next.” – Will Smith

39.”If it was something that I really committed myself to, I don’t think there’s anything that could stop me becoming President of the United States.” – Will Smith

40.”A rapper is about being completely true to yourself. Being an actor is about changing who you are.” – Will Smith

43.”I mean, I’m very serious with my kids about them comprehending the intricacies of global finance.” – Will Smith

44.” Money & success don’t change people they merely amplify what is already there.” – Will Smith

46.”The concept of improving lives runs through the center of everything I do. And then I realized the way to improve lives is to continually improve yourself.” – Will Smith

47.”There’s no reason to have a plan B because it distracts from plan A.” – Will Smith

48.”Don’t chase people. Be yourself, do your own thing, and work hard. The right people the ones who really belong in your life will come to you. And stay.” – Will Smith

49.”Never underestimate the pain of a person, because, in all honesty, everyone is struggling. Some people are better at hiding it than others.” – Will Smith

50.”Too many people spend money they haven’t earned to buy things they don’t want, to impress people they don’t like.” – Will Smith