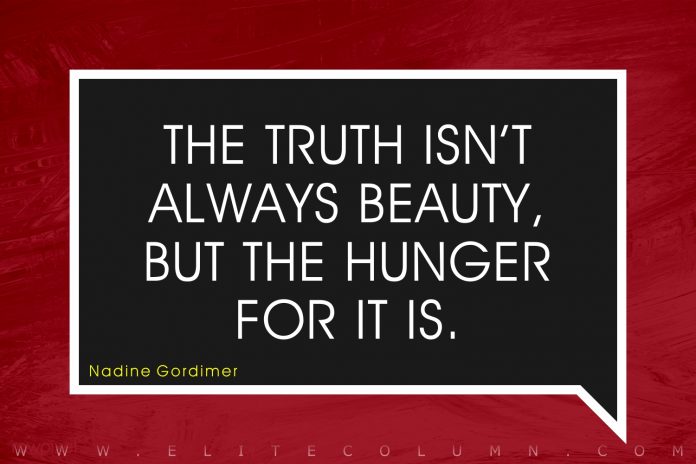 1. “There’s more beauty in truth, even if it is dreadful beauty.” – John Steinbeck

2. “Every person must choose how much truth he can stand.” – Irvin D. Yalom

3. “There are few reasons for telling the truth, but for lying the number is infinite.” – Carlos Ruiz Zafon

5. “In a time of deceit, telling the truth is a revolutionary act.” – George Orwell

6. “No persons are more frequently wrong, than those who will not admit they are wrong.” – François de La Rochefoucauld

7. “People often claim to hunger for truth, but seldom like the taste when it’s served up.” – George R.R. Martin

8. “The truth isn’t always beauty, but the hunger for it is.” – Nadine Gordimer

9. “No one tells the truth to people they don’t actually know, and if they do it is a horrible trait. Everyone wants something smaller, something neater than the truth.” – Ann Patchett

10. “The great advantage about telling the truth is that nobody ever believes it.” – Dorothy L. Sayers

12. “Everything we hear is an opinion, not a fact. Everything we see is a perspective, not the truth.” – Marcus Aurelius

13. “Much of what was said did not matter, and that much of what mattered could not be said.” – Katherine Boo

15. “A truth that’s told with bad intent beats all the lies you can invent.” – William Blake

17. “There is nothing that is going to make people hate you more, and love you more, than telling the truth.” – Stefan Molyneux

18. “It is difficult, when faced with a situation you cannot control, to admit you can do nothing.” – Lemony Snicket

19. “Our biggest fear is not in expressing the truth but that we will be attacked or belittled because of our truth.” – Kelli Wilson

20. “Every truth has two sides; it is as well to look at both, before we commit ourselves to either.” – Aesop

21. “The truth does not change according to our ability to stomach it.” – Flannery O’Connor

22. “Better a cruel truth than a comfortable delusion.” – Edward Abbey

23. “Once you reject fear, you will become the perfect candidate to receive and reflect truth.” – Suzy Kassem

24. “All truths are easy to understand once they are discovered; the point is to discover them.” – Galileo Galilei

25. “Three things can not hide for long: the Moon, the Sun and the Truth.” – Gautama Buddha

28. “Truth is certainly a branch of morality and a very important one to society.” – Thomas Jefferson

29. “It is an occupational hazard that anyone who has spent her life learning how to lie eventually becomes bad at telling the truth.” – Ally Carter

30. “A lie can travel half way around the world while the truth is putting on its shoes.” – Charles Spurgeon

32. “Whatever satisfies the soul is truth.” – Walt Whitman

33. “Truth, like gold, is to be obtained not by its growth, but by washing away from it all that is not gold.” – Leo Tolstoy

34. “Truth will always be truth, regardless of lack of understanding, disbelief or ignorance.” – W. Clement Stone

35. “Some people think that the truth can be hidden with a little cover-up and decoration. But as time goes by, what is true is revealed, and what is fake fades away.” – Ismail Haniyeh

36. “Truth is so rare that it is delightful to tell it.” – Emily Dickinson

37. “Once you eliminate the impossible, whatever remains, no matter how improbable, must be the truth.” – Arthur Conan Doyle

38. “People will generally accept facts as truth only if the facts agree with what they already believe.” – Andy Rooney

39. “Truth without love is brutality, and love without truth is hypocrisy.” – Warren Wiersbe

40. “Facts are threatening to those invested in fraud.” – DaShanne Stokes

41. “Half a truth is often a great lie.” – Benjamin Franklin

Thanks for checking out the best Truth Quotes. Feel free to share the quotes with your friends. Leave a comment below and which are your favourite Truth Quotes ?