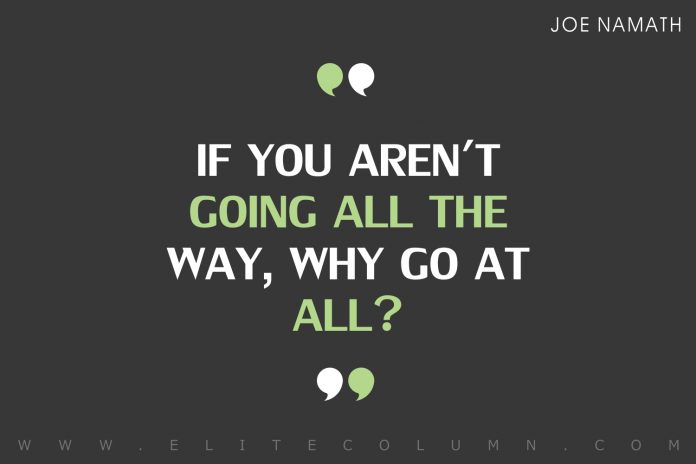 1. “If you have everything under control, you’re not moving fast enough.” – Mario Andretti

2. “In the end, the game comes down to one thing: man against man. May the best man win.” – Sam Huff

3. “Do you know what my favorite part of the game is? The opportunity to play.” – Mike Singletary

4. “One man practicing sportsmanship is far better than 50 preaching it.” – Knute Rockne

5. “There are only two options regarding commitment. You’re either IN or you’re OUT. There is no such thing as life in-between.” – Pat Riley

6. “The difference between the impossible and the possible lies in a man’s determination.” – Tommy Lasorda

7. “I’ve been in the twilight of my career longer than most people have had their career.” – Martina Navratilova

9. “I hated every minute of training, but I said, ‘Don’t quit. Suffer now and live the rest of your life as a champion.’” – Muhammad Ali

10. “If you are afraid of failure you don’t deserve to be successful!” – Charles Barkley

11. “Today I will do what others won’t, so tomorrow I can accomplish what others can’t.” – Jerry Rice

12. “You might not be able to outthink, out market or outspend your competition, but you can outwork them.” – Lou Holtz

13. “Just take the ball and throw it where you want to. Throw strikes. Home plate don’t move.” – Satchel Paige

16. “You can’t get much done in life if you only work on the days when you feel good.” – Jerry West

18. “It’s hard to beat a person who never gives up.”  “Heroes get remembered, but legends never die.” – Babe Ruth

20. “Adversity causes some men to break; others to break records.” – William A. Ward

21. “You can’t put a limit on anything. The more you dream, the farther you get.” – Michael Phelps

22. “Procrastination is one of the most common and deadliest of diseases and its toll on success and happiness is heavy.” – Wayne Gretzky

24. “Only he who can see the invisible can do the impossible.” – Frank L. Gaines

28. “Age is no barrier. It’s a limitation you put on your mind.” – Jackie Joyner-Kersee

30. “I always felt that my greatest asset was not my physical ability, it was my mental ability.” – Bruce Jenner

32. “One man practicing sportsmanship is far better than 50 preaching it.” – Knute Rockne

33. “Champions keep playing until they get it right.” – Billie Jean King

35. “Always make a total effort, even when the odds are against you.” – Arnold Palmer

36. “The more difficult the victory, the greater the happiness in winning.” – Pele

39. “An athlete cannot run with money in his pockets. He must run with hope in his heart and dreams in his head.” – Emil Zatopek

40. “You have to expect things of yourself before you can do them.” – Michael Jordan

42. “You were born to be a player. You were meant to be here. This moment is yours.” – Herb Brooks

43. “Winning isn’t everything, it’s the only thing.” – Vince Lombardi

44. “The highest compliment that you can pay me is to say that I work hard every day, that I never dog it.” – Wayne Gretzky

45. “The man who has no imagination has no wings.” – Muhammad Ali

46. “The key is not the will to win… everybody has that. It is the will to prepare to win that is important.” – Bobby Knight

48. “You have to do something in your life that is honorable and not cowardly if you are to live in peace with yourself.” – Larry Brown

50. “There may be people that have more talent than you, but there’s no excuse for anyone to work harder than you do.” – Derek Jeter

Thanks for checking out the best Book Quotes. Feel free to share the quotes with your friends. Leave a comment below and which are your favourite Book Quotes ?