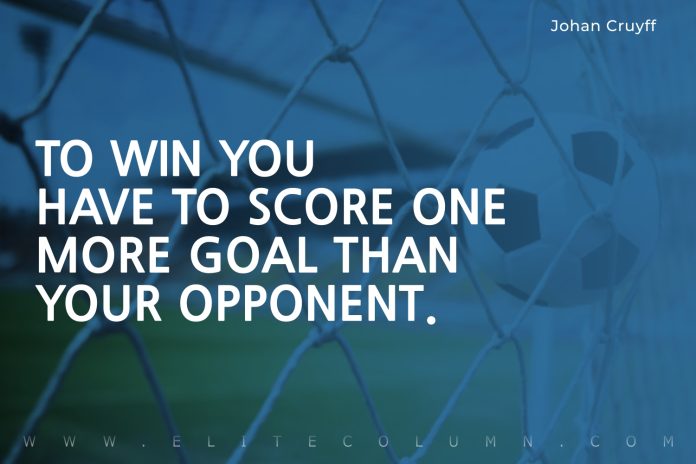 1. “I learned all about life with a ball at my feet.” – Ronaldinho

2. “For sportsmen or women who want to be champions, the mind can be as important, if not more important, than any other part of the body.” – Gary Neville

3. “Whatever brings you down will eventually make you stronger.” – Alex Morgan

4. “Young players need freedom of expression to develop as creative players they should be encouraged to try skills without fear of failure.” – Arsene Wenger

5. “To win you have to score one more goal than your opponent.” – Johan Cruyff

6. “Mountains are there to be climbed, aren’t they?” – Ole Gunnar Solksjaer

7. “Before kids can play like a pro, they must enjoy playing the game like a kid.” – Steve Locker

8. “Every single day I woke up and commit to myself to become a better player.” – Mia Hamm

9. “You can overcome anything, if, and only if, you love something enough.” – Lionel Messi

10. “Every time I went away I was deceiving my mum. I’d tell her I was going to school, but I’d be out on the street playing football. I always had a ball on my feet.” – Ronaldo

11. “Keep working even when no one is watching.” – Alex Morgan

12. “I don’t have time for hobbies. At the end of the day, I treat my job as a hobby. It’s something I love doing.” – David Beckham

13. “I have the chance to do for a living what I like the most in life, and that’s playing football. I can make people happy and enjoy myself at the same time.” – Ronaldinho

14. “Keep dreaming, even when people laugh at your dreams or tell you that they are impossible to achieve. Keep believing in yourself.” – Tobin Heath

15. “I am constantly being asked about individuals. The only way to win is as a team. Football is not about one or two or three star players.” – Phyllis Diller

16. “Soccer is simple  you just need to have the right mentality, fighting in every game, in every practice and for every ball.” – Hristo Stoichkov

17. “Many people say I’m the best women’s soccer player in the world. I don’t think so. And because of that, someday I just might be.” – Mia Hamm

18. “I once cried because I had no shoes to play soccer, but one day, I met a man who had no feet.” – Zinedine Zidane

19. “I will forgive if the players cannot get it right, but not if they do not try hard.” – Pep Guardiola

20. “Ronaldo can do whatever he wants as a footballer. There are some things he does with the ball that make me touch my head and wonder how he did it.” – Cristiano Ronaldo

22. “Anyone who sacrifices his dreams to reality is forever beaten.” – Thomas Muller

23. “I made many mistakes, but I learnt from everything. I still make mistakes; I still learn from them. Nobody is perfect.” – Zlatan Ibrahimovic

24. “Some people think football [soccer] is a matter of life and death. I don’t like that attitude. I can assure them it is much more serious than that.” – Bill Shankly

26. “I am not a perfectionist, but I like to feel that things are done well.” – Cristiano Ronaldo

27. “You have to fight to reach your dream. You have to sacrifice and work hard for it.” – Lionel Messi

28. “When you win, you don’t get carried away. But if you go step by step, with confidence, you can go far.” – Diego Maradona

29. “The secret is to believe in your dreams in your potential that you can be like your star, keep searching, keep believing and don’t lose faith in yourself.” – Neymar

30. “The vision of a champion is bent over, drenched in sweat, at the point of exhaustion, when nobody else is looking.” – Mia Hamm

31. “Football is the ballet of the masses.” – Dmitri Shostakovich

32. “Most of us are in this more than just for playing soccer. We’re in it for the bigger goal to move it along for the next generation.” – Landon Donovan

33. “I don’t believe skill was, or ever will be, the result of coaches. It is a result of a love affair between the child and the ball.” – Roy Keane

34. “The rules of soccer are very simple, basically it is this: if it moves, kick it. If it doesn’t move, kick it until it does.” – Phil Abraham

36. “In football as in watchmaking, talent and elegance mean nothing without rigor and precision.” – Lionel Messi

37. “In his life, a man can change wives, political parties or religions, but he cannot change his favourite soccer team.” – Eduardo Galeano

39. “Success is no accident. It is hard work, perseverance, learning, studying, sacrifice and most of all, love of what you are doing or learning to do.” – Pele

40. “I think there are a lot of things that soccer does in the communities that transcend the soccer field.” – Brandi Chastain

42. “Football is a game played with arms, legs and shoulders but mostly from the neck up.” – Knute Rockne

43. “Sport has the power to inspire and unite people. In Africa, soccer enjoys great popularity and has a particular place in the hearts of people.” – Nelson Mandela

44. “There are many poets in football, but poets don’t win many titles.” – Jose Mourinho

46. “I always want to become better. If never being satisfied is a problem, then I have it. At least it’s a good problem.” – Zlatan Ibrahimovic

48. “I never wanted Manchester United to be second to anybody.” – Matt Busby

49. “I’ve never tried to hide the fact that it is my intention to become the best.” – Cristiano Ronaldo

50. “Nobody has enough talent to live on talent alone. Even when you have talent, a life without work goes nowhere.” – Arsene Wenger

Thanks for checking out the best Soccer Quotes. Feel free to share the quotes with your friends. Leave a comment below and which are your favourite Soccer Quotes ?