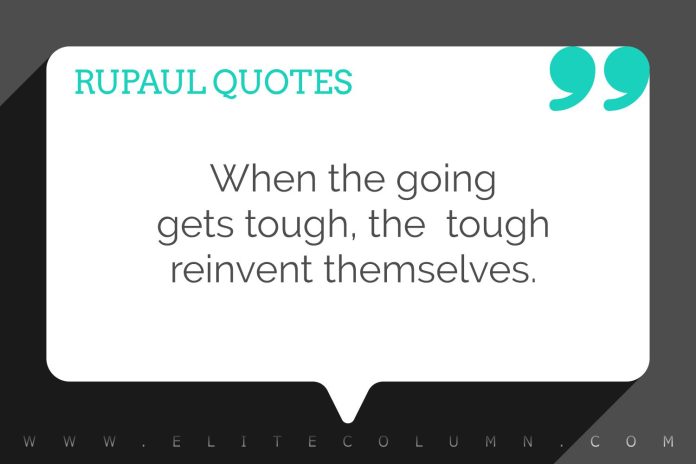 1. “When the going gets tough, the tough reinvent themselves.” – RuPaul

3. “Never forget that the most political thing you can ever do is follow your heart.” – RuPaul

4. “Once you clear out from your consciousness things that no longer matter, you’re able to make room for other things.” – RuPaul

5. “All sins are forgiven once you start making a lot of money.” – RuPaul

6. “We are all doing drag. Every single person on this planet is doing it.” – RuPaul

8. “There’s not another lip-synch song on the planet, in the history of lip-synching songs, that has been lip-synched more than ‘I Will Survive.’” – RuPaul

9. “I love the creativity and the social and political aspects of drag.” – RuPaul

10. “Drag is there to remind culture not to take itself too seriously. All of this is illusion.” – RuPaul

11. “I don’t think drag will ever be mainstream because it’s counter to what the mainstream directive is, which is picking an identity and sticking with it for the rest of your life.” – RuPaul

13. “From childhood, we’re trained to be a certain way, to behave a certain way – so that the power base can control us, really. And punk and drag are completely outside of that.” – RuPaul

14. “I love drag, and I love people who gravitate toward it. Because the people who do drag are people who dance to the beat of a different drummer.” – RuPaul

15. “I think our culture is moving forward – slowly. And also, as we move forward, we’re witnessing some of the old stalwarts rejecting that forward motion.” – RuPaul

16. “Racism has nothing to do with race. It is the ego’s way of making you feel ‘better than’.” – RuPaul

17. “Usually, people who don’t have a broad perspective see gay people as servants – as people who are there to make them look good.” – RuPaul

18. “In my life, I’ve been able to really examine society in a way most people who aren’t outsiders don’t get a chance to do.” – RuPaul

19. “Unfortunately, in our culture, one person can write a letter to the network, and they shut something down. It’s unfortunate.” – RuPaul

20. “This is an important thing: People who live in the mainstream and the status quo think that everyone else is there to serve them.” – RuPaul

22. “Drag really is all about dipping into pop culture and then reshaping it into something else.” – RuPaul

24. “Young people need to know there are ways for them to navigate this life.” – RuPaul

25. “Life is dangerous. There are no guarantees.” – RuPaul

26. “To win at life and to win in this competition, you have to be willing to die a thousand deaths and be reborn a thousand times.” – RuPaul

27. “When you become the image of your own imagination, it’s the most powerful thing you could ever do.” – RuPaul

28. “Success is something between you and yourself. I think only you know where you’ve come from and how far you wanna go.” – RuPaul

29. “You may not get the role you auditioned for, but make a lasting impression and they’ll remember you for something else later.” – RuPaul

30. “If you want to be invited to the party, you better have something to bring.” – RuPaul

31. “To limit yourself to one thing, it’s your business. But you have a choice.” – RuPaul

32. “Personally, I experience success when I enjoy what I’m doing. I love the creative process, even if the end result isn’t embraced by anyone else.” – RuPaul

33. “If you can’t love yourself, how the hell are you gonna love somebody else?” – RuPaul

34. “There are so many sensitive souls; they don’t know what to do with their feelings.” – RuPaul

35. “Don’t believe the hype; don’t believe what it tells you on your driver’s license. You are an extension of the power that created this whole universe.” – RuPaul

36. “Unless they’re paying your bills, pay them bitches no mind!” – RuPaul

37. “Biggest obstacle I ever faced was my own limited perception of myself.” – RuPaul

38. “It’s very easy to look at the world and think, this is all so cruel and so mean. It’s important to not become bitter from it.” – RuPaul

39. “In our subconscious, we all know we’re playing roles.” – RuPaul

40. “It’s not the word itself, but the intention behind the word.” – RuPaul

Thanks for checking out the best Rupaul Quotes. Feel free to share the quotes with your friends. Leave a comment below and which are your favourite Rupaul Quotes ?