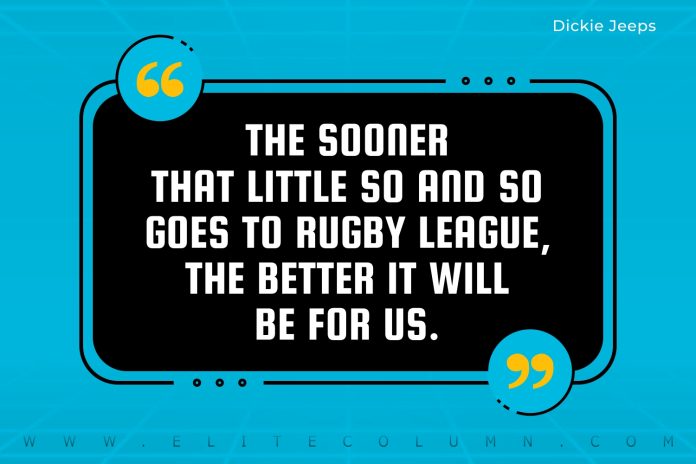 1. “I played ten injury free years between the ages of 12 and 22. Then, suddenly, it seemed like I was allergic to the twentieth century.” – Nigel Melville

2. “There are no yellow or red cards in my collection but I cannot say I’m an angel.” – Jonny Wilkinson

4. “League is much, much more physical than Union, and that’s before anyone starts breaking the rules.” – Adrian Hadley

5. “If you can’t take a punch, you should play table tennis.” – Pierre Berbizier

6. “I thought I would have one quiet pint and about 17 noisy ones.” – Gareth Chilcott

7. “In 1823, William Webb Ellis first picked up the ball in his arms and ran with it. And for the next 156 years forwards have been trying to work out why.” – Tasker Watkins

8. “The sooner that little so and so goes to rugby league, the better it will be for us.” – Dickie Jeeps

9. “If there was a Harlem Globetrotters of rugby league, he’d be in it.” – Brett Morris

10. “The main difference between playing League and Union is that now I get my hangovers on Monday instead of Sunday.” – Tom David

11. “Rugby players are either piano shifters or piano movers. Fortunately, I am one of those who can play a tune.” – Pierre Danos

12. “You’re not going to please everyone, but then, it’s not about pleasing people it’s about winning rugby games.” – Alun Wyn Jones

13. “I may not have been very tall or very athletic, but the one thing I did have was the most effective backside in world rugby.” – Jim Glennon

14. “I’m from Samoan heritage, and with the rugby in our blood and everything, I always felt I’ve been tough, and that my tolerance for pain is pretty high.” – Tony Finau

15. “Nobody in Rugby should be called a genius. A genius is a guy like Norman Einstein.” – Joe Theismann

16. “Rugby is a game for the mentally deficient. That is why it was invented by the British. Who else but an Englishman could invent an oval ball?” – Peter Pook

17. “Rugby backs can be identified because they generally have clean jerseys and identifiable partings in their hair.” – Peter Fitzsimons

18. “I think you enjoy the game more if you don’t know the rules. Anyway, you’re on the same wavelength as the referees.” – Jonathan Davies

19. “Rugby backs can be identified because they generally have clean jerseys and identifiable partings in their hair.” – Wallaby Peter FitzSimons

20. “I prefer rugby to soccer. I enjoy the violence in rugby, except when they start biting each other’s ears off.” – Elizabeth Taylor

21. “England’s coach Jack Powell, an immensely successful businessman, has the acerbic wit of Dorothy Parker and, according to most New Zealanders, a similar knowledge of rugby.”

22. “Rugby is not like tea, which is good only in England, with English water and English milk.” – Dennis LaLanne

23. “Rugby is a good occasion for keeping thirty bullies far from the center of the city.” – Oscar Wilde

24. “Rugby may have many problems, but the gravest is undoubtedly that of the persistence of summer.” – Chris Laidlaw

26. “Rugby is great. The players don’t wear helmets or padding; they just beat the living daylights out of each other and then go for a beer. I love that.” – Joe Theismann

27. “Anyone who does not watch rugby league is not a real person.” – John Singleton

28. “If the game is run properly as a professional game, you do not need 57 old farts running rugby.” – Will Carling

29. “In my experience, there is only one motivation, and that is desire. No reason or principle contain it or stand against it.” – Jane Smiley

30. “Whether it is rugby or business or school, or whatever. People respect you, and they certainly have the respect of the team.” – Coach Michael Cheika

31. “Rugby is a hooligans game played by gentlemen.” – Winston Churchill

32. “Beer and Rugby are more or less synonymous.” – Chris Laidlaw

33. “I like to think I play rugby as it should be played.” – Jonny Wilkinson

35. “The advantage law is the best law in rugby, because it lets you ignore all the others for the good of the game.” – Derek Robinson

38. “Winning isn’t everything, it’s the only thing.” – Vince Lombardi

40. “The men who play on that rugby field are more alive than too many of us will ever be.” – Victor Cahn

41. “Success is how high you bounce when you hit bottom.” – George S. Patton

43. “Ballroom dancing is a contact sport. Rugby is a collision sport.” – Heyneke Meyer

44. “The whole point of rugby is that it is, first and foremost, a state of mind, a spirit. ” – Jean Pierre Rives

45. “The pub is as much a part of rugby as is the playing field.” – John Dickenson

46. “Everybody thinks we should have moustaches but in fact you could put us all on the cover of Vogue.” – Helen Kirk

50. “I’m 49, I’ve had a brain haemorrhage and a triple bypass and I could still go out and play a reasonable game of rugby union. But I wouldn’t last 30 seconds in rugby league.” – Graham Lowe

Thanks for checking out the best Rugby Quotes. Feel free to share the quotes with your friends. Leave a comment below and which are your favourite Rugby Quotes ?