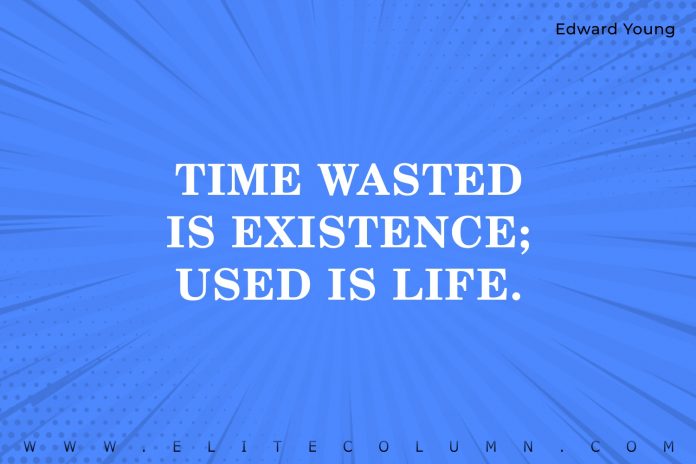 1. “By one delay after another they spin out their whole lives, till there’s no more future left for them.” – Robert L’Estrange

2. “I have spent my days stringing and unstringing my instrument, while the song I came to sing remains unsung.” – Rabindranath Tagore

3. “Only put off until tomorrow what you are willing to die having left undone.” – Pablo Picasso

5. “We are so scared of being judged that we look for every excuse to procrastinate.” – Erica Jong

7. “Life, as it is called, is for most of us one long postponement.” – Henry Miller

8. “There is nothing so fatal to character as half finished tasks.” – David Lloyd George

10. “Doing just a little bit during the time we have available puts you that much further ahead than if you took no action at all.” – Byron Pulsifer

12. “You will repeatedly feel like giving up on your goal. Do not ever give up.” – Avinash VS

14. “This one makes a net, this one stands and wishes. Would you like to make a bet which one gets the fishes.” – Chinese Rhyme

17. “Things may come to those who wait, but only the things left by those who hustle.” – Abraham Lincoln

19. “If you put off everything till you’re sure of it, you’ll never get anything done.” – Norman Vincent Peale

20. “If you want to make an easy job seem mighty hard, just keep putting off doing it.” – Olin Miller

21. “Often greater risk is involved in postponement than in making a wrong decision.” – Harry A. Hopf

22. “Getting an idea should be like sitting on a pin; it should make you jump up and do something.” – E. L. Simpson

23. “All things come to those who wait, but when they come they’re out of date.” – Anonymous

24. “Work expands so as to fill the time available for its completion.” – C. Northcote Parkinson

25. “The only difference between success and failure is the ability to take action.” – Alexandre Graham Bell

26. “I don’t wait for moods. You accomplish nothing if you do that. Your mind must know it has got to get down to work.” – Pearl S. Buck

27. “Much of the stress that people feel doesn’t come from having too much to do. It comes from not finishing what they started.” – David Allen

28. “Nothing is so fatiguing as the eternal hanging on of an uncompleted task.” – William James

30. “To think too long about doing a thing often becomes its undoing.” – Eva Young

32. “If you want to make an easy job seem mighty hard, just keep putting off doing it.” – Olin Miller

33. “A year from now you may wish you had started today.” – Karen Lamb

34. “Procrastination is the thief of time.” – Edward Young

35. “Procrastination usually results in sorrowful regret. Today’s duties put off until tomorrow give us a double burden to bear; the best way is to do them in their proper time.” – Ida Scott Taylor

36. “Following-through is the only thing that separates dreamers from people that accomplish great things.” – Gene Hayden

38. “He who every morning plans the transactions of that day and follows that plan carries a thread that will guide him through the labyrinth of the most busy life.” – Victor Hugo

39. “Do you know what happens when you give a procrastinator a good idea? Nothing!” – Donald Gardner

40. “Procrastination is like a credit card: it’s a lot of fun until you get the bill.” – Christopher Parker

42. “Yesterday is a cancelled check. Tomorrow is a promissory note. Today is the only cash you have, so spend it wisely.” – Kim Lyons