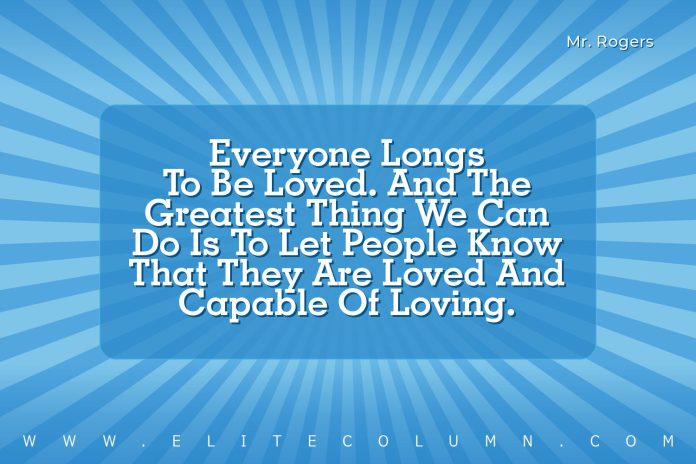 1. “The world needs a sense of worth, and it will achieve it only by its people feeling that they are worthwhile.” – Mr. Rogers

3. “How many times have you noticed that it’s the little quiet moments in the midst of life that seem to give the rest extra-special meaning?” – Mr. Rogers

4. “I don’t think anyone can grow unless he’s loved exactly as he is now, appreciated for what he is rather than what he will be.” – Mr. Rogers

5. “I hope you’re proud of yourself for the times you’ve said ‘yes,’ when all it meant was extra work for you and was seemingly helpful only to someone else.” – Mr. Rogers

6. “I feel so strongly that deep and simple is far more essential than shallow and complex.” – Mr. Rogers

9. “When I was a boy and I would see scary things in the news, my mother would say to me, ‘Look for the helpers. You will always find people who are helping.’” – Mr. Rogers

10. “Everyone longs to be loved. And the greatest thing we can do is to let people know that they are loved and capable of loving.” – Mr. Rogers

12. “Taking care is one way to show your love. Another way is letting people take good care of you when you need it.” – Mr. Rogers

15. “Try your best to make goodness attractive. That’s one of the toughest assignments you’ll ever be given.” – Mr. Rogers

16. “Love and trust, in the space between what’s said and what’s heard in our life, can make all the difference in this world.” – Mr. Rogers

17. “You can think about things and make believe. All you have to do is think and they’ll grow.” – Mr. Rogers

18. “You rarely have time for everything you want in this life, so you need to make choices. And hopefully your choices can come from a deep sense of who you are.” – Mr. Rogers

19. “There’s a part of all of us that longs to know that even what’s weakest about us is still redeemable and can ultimately count for something good.” – Mr. Rogers

20. “Knowing that we can be loved exactly as we are gives us all the best opportunity for growing into the healthiest of people.” – Mr. Rogers

21. “Little by little we human beings are confronted with situations that give us more and more clues that we are not perfect. “- Mr. Rogers

22. “Love and success, always in that order. It’s that simple AND that difficult.” – Mr. Rogers

24. “The greatest gift you ever give is your honest self.” – Mr. Rogers

25. “Imagine what our real neighborhoods would be like if each of us offered, as a matter of course, just one kind word to another person.” – Mr. Rogers

26. “There is no normal life that is free of pain. It’s the very wrestling with our problems that can be the impetus for our growth.” – Mr. Rogers

30. “You are special. You’re special to me. There’s only one in this wonderful world.” – Mr. Rogers

32. “You can’t really love someone else unless you really love yourself first.” – Mr. Rogers

33. “I’m proud of you for the times you came in second, or third, or fourth, but what you did was the best you had ever done.” – Mr. Rogers

36. “Often out of periods of losing come the greatest strivings toward a new winning streak.” – Mr. Rogers

37. “It’s the people we love the most who can make us feel the gladdest…and the maddest! Love and anger are such a puzzle!” – Mr. Rogers

38. “Who you are inside is what helps you make and do everything in life.” – Mr. Rogers

39. “Listening is where love begins: listening to ourselves and then to our neighbors.” – Mr. Rogers

40. “Often, problems are knots with many strands, and looking at those strands can make a problem seem different.” – Mr. Rogers

41. “When we can talk about our feelings, they become less overwhelming, less upsetting and less scary.” – Mr. Rogers

42. “There are times when explanations, no matter how reasonable, just don’t seem to help.” – Mr. Rogers

43. “Feeling good about ourselves is essential in our being able to love others.” – Mr. Rogers

44. “Even though no human being is perfect, we always have the chance to bring what’s unique about us to life in a redeeming way.” – Mr. Rogers

45. “Discovering the truth about ourselves is a lifetime’s work, but it’s worth the effort.” – Mr. Rogers