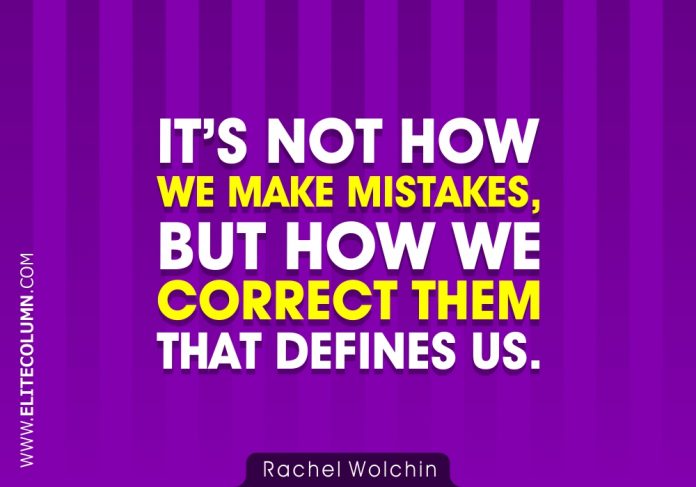 1. “Mistakes have the power to turn you into something better than you were before.” – Anonymous

2. “Don’t be ashamed by your mistakes, they only prove that you try hard and never give up.” – Riley Czarkowski

3. “Do not be afraid to ask questions even if it makes you look stupid.” – Avinash VS

5. “There are no failures, if you learn and grow from your mistakes; there are only lessons learned.” – Dee Waldeck

6. “Let all your regrets and mistakes become your sails and your rudders, and not your anchors” – Sotero M Lopez II

7. “Experience is simply the name we give our mistakes.” – Oscar Wilde

8. “You can take a break, as many times as you like and do not stop going after what you want though.” – Avinash VS

9. “Don’t let the mistakes and disappointments of the past control and direct your future.” – Zig Ziglar

10. “We learn from failure, not from success!” – Bram Stoker

11. “The mistakes we regret the most are the ones we were too scared to make.” – Ollie Slaney

12. “Well, we all make mistakes, dear, so just put it behind you. We should regret our mistakes and learn from them, but never carry them forward into the future with us.” – L.M. Montgomery

14. “A man must learn from his own mistakes, to be what he wishes to be.” – Lailah Gifty Akita

15. “I have learned all kinds of things from my many mistakes. The one thing I never learn is to stop making them.” – Joe Abercrombie

16. “I have made so many mistakes but I have learned a lot and I’m confident to say – he who never made a mistake never made any discovery” – Bernard Kelvin Clive

17. “All men make mistakes, but a good man yields when he knows his course is wrong, and repairs the evil. The only crime is pride.” – Sophocles

18. “Mistakes are, after all, the foundations of truth, and if a man does not know what a thing is, it is at least an increase in knowledge if he knows what it is not.” – Carl G.Jung

19. “When you make a mistake, there are only three things you should ever do about it: admit it, learn from it, and don’t repeat it.” – Paul Bear Bryant

20. “The sooner you make your first five thousand mistakes the sooner you will be able to correct them.” – Kimon Nicolaides

21. “Don’t confuse poor decision-making with destiny. Own your mistakes. It’s ok; we all make them. Learn from them so they can empower you!” – Steve Maraboli

22. “Forget your mistakes but remember what they taught you.” – Vannetta Chapman

24. “We make our discoveries through our mistakes: we watch one another’s success: and where there is freedom to experiment there is hope to improve.” – Sir Arthur Thomas

25. “Mistakes are always forgivable if one has the courage to admit them.” – Bruce Lee

26. “We all mess up. It’s what we learn from our mistakes that matters.” – Lauren Myracle

27. “Everyone makes mistakes. The important thing is to not make the same mistake twice.” – Stephanie Perkins

29. “One mistake does not have to rule a person’s entire life.” – Joyce Meyer

30. “Embrace being perfectly imperfect. Learn from your mistakes and forgive yourself, you’ll be happier.” – Roy Bennett

31. “A life spent making mistakes is not only more honourable but more useful than a life spent doing nothing.” – George Bernard Shaw

32. “Mistakes are painful when they happen, but years later a collection of mistakes is what is called experience.” – Denis Waitley

33. “And a step backward, after making a wrong turn, is a step in the right direction.” – Kurt Vonnegut

34. “Our mistakes and regrets are not barriers to becoming who we can be; they are a necessary ingredient.” – David Schnarch

35. “Mistakes are the growing pains of wisdom.” – William Jordan

36. “Mistakes are the usual bridge between inexperience and wisdom.” – Phyllis Theroux

37. “It’s not how we make mistakes, but how we correct them that defines us.” – Rachel Wolchin

38. “To make no mistakes is not in the power of man; but from their errors and mistakes the wise and good learn wisdom for the future.” – Plutarch

39. “If you are afraid to take a chance, take one anyway. What you don’t do can create the same regrets as the mistakes you make.” – Iyanla Vanzant

40. “We have to make mistakes, it’s how we learn compassion for others.” – Curtis Sittenfeld

41. “Anyone who has never made a mistake has never tried anything new.” – Albert Einstein

42. “Freedom is not worth having if it does not include the freedom to make mistakes.” – Mahatma Gandhi

45. “The greatest mistake you can make in life is to be continually fearing you will make one.” – Elbert Hubbard

46. “There are no mistakes or failures, only lessons.” – Denis Waitley

47. “Failure is instructive. The person who really thinks learns quite as much from his failures as from his successes.” – John Dewey

49. “Make glorious amazing mistakes. Make mistakes nobody has ever made before. Do not freeze, do not stop, do not worry. Whatever you are scared of doing, do it.” – Neil Gaiman

50. “We often need to lose sight of our priorities in order to see them.” – John Irving

Thanks for checking out the best Mistake Quotes. Feel free to share the quotes with your friends. Leave a comment below and which are your favourite Mistake Quotes ?