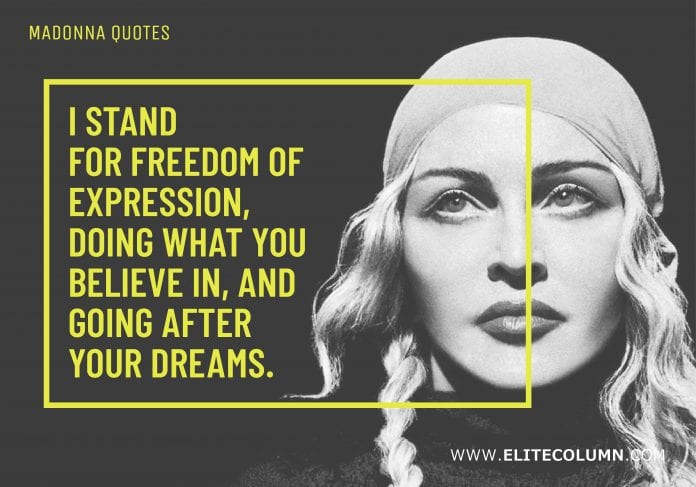 Pop legend Madonna is known for her constant reinvention as a performer. She went solo as a pop singer and became a sensation on the then male-dominated ’80s music scene. She has achieved 21 Top 10 hits in the United States and has sold more than 70 million albums internationally. In January 2008, she was named the world’s wealthiest female musician by Forbes magazine. Madonna quotes will make you stronger and EliteColumn brings you 12 strongest Madonna quotes. 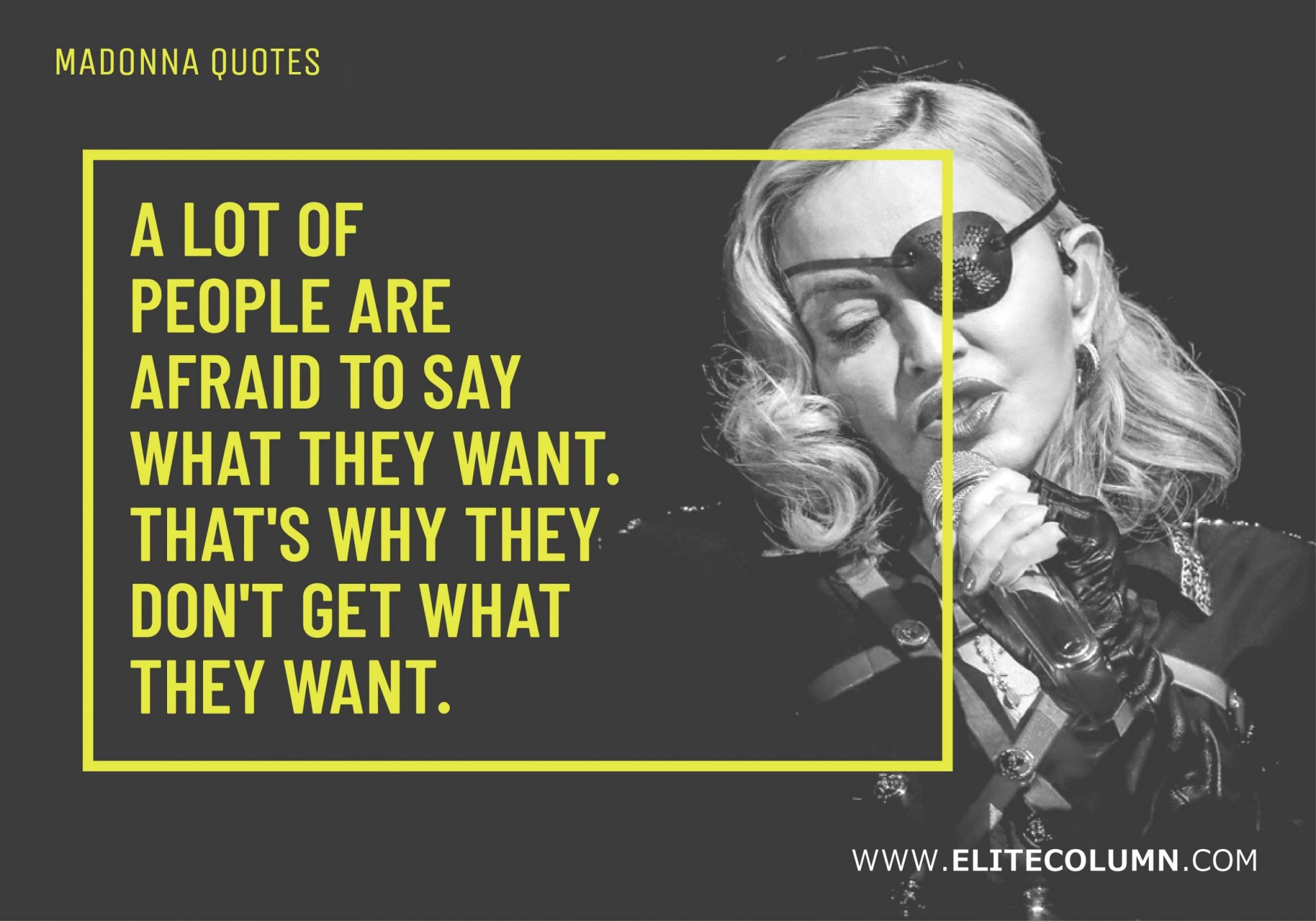 2. “I think you can be defiant and rebellious and still be strong and positive.” – Madonna 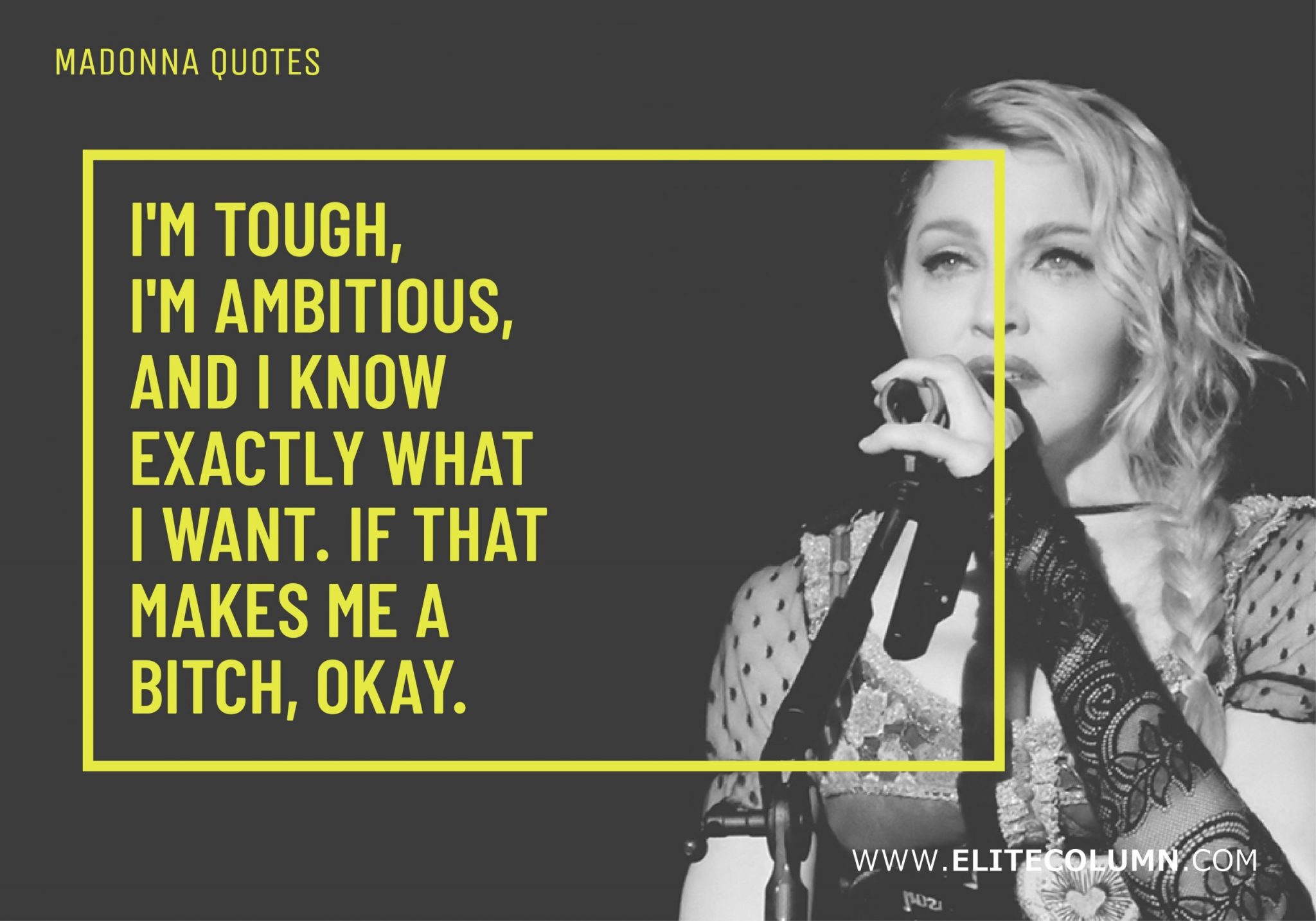 6. “We learn our lessons; we get hurt; we want revenge. Then we realize that actually, happiness and forgiving people is the best revenge.” – Madonna

7. “I’ve never really lived a conventional life, so I think it’s quite foolish for me or anyone else to start thinking that I am going to start making conventional choices.” – Madonna

8. “If I can’t be daring in my work or the way I live my life, then I don’t really see the point of being on this planet.” – Madonna 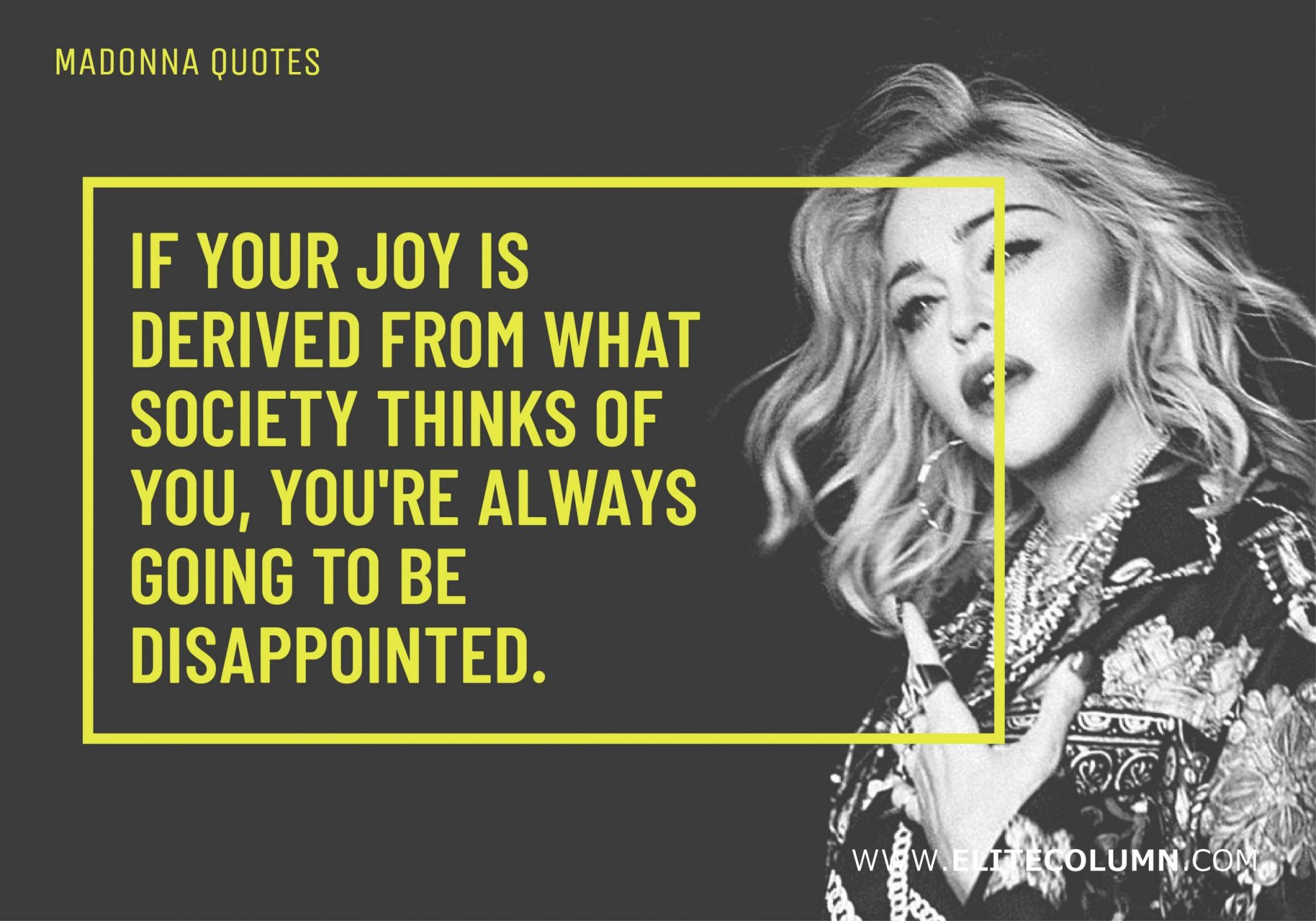 9. “If your joy is derived from what society thinks of you, you’re always going to be disappointed.” – Madonna

11. “Fame is a form of misunderstanding.” – Madonna 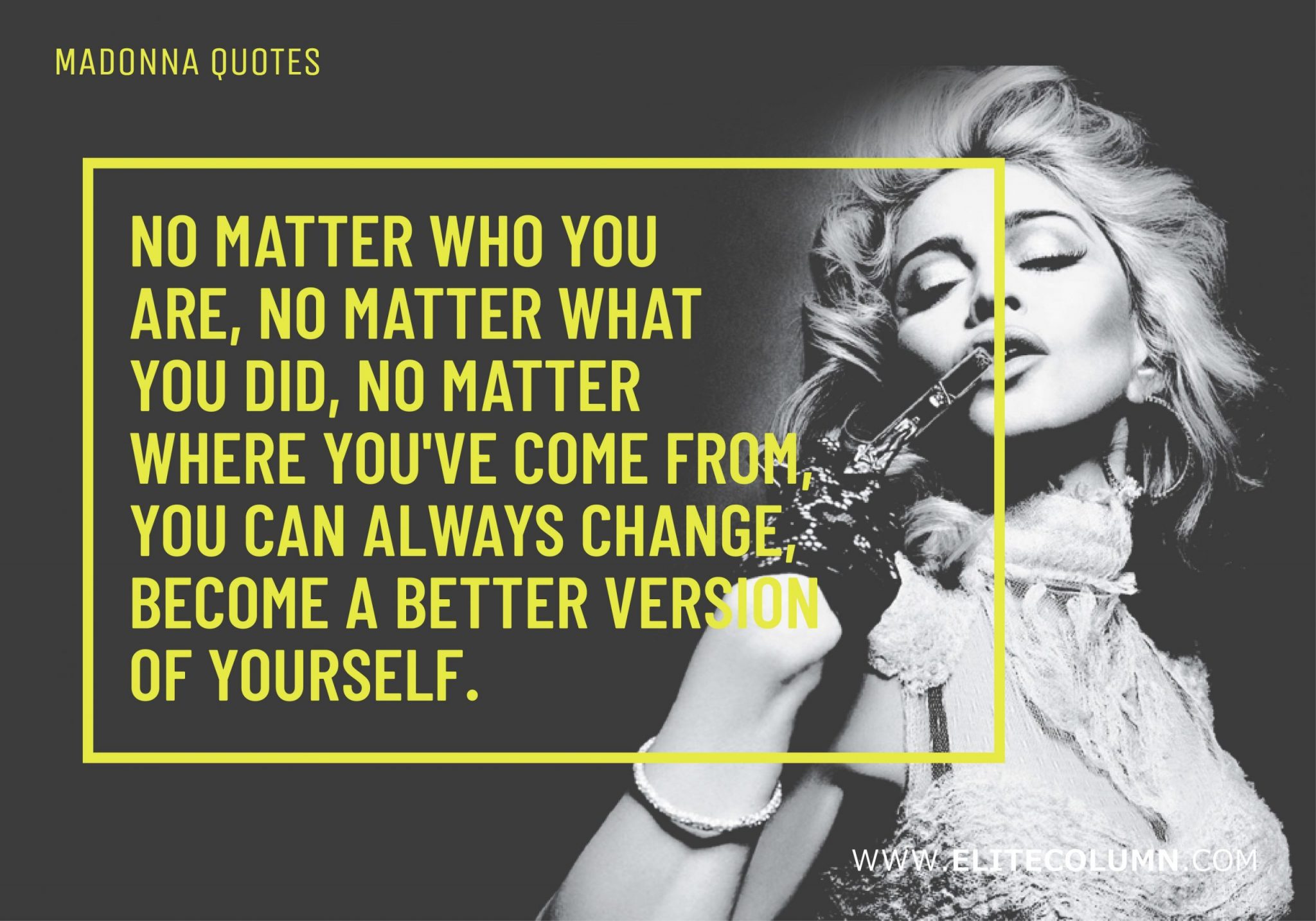 13. “No matter who you are, no matter what you did, no matter where you’ve come from, you can always change, become a better version of yourself.” – Madonna

14. “Be strong, believe in freedom and in God, love yourself, have a sense of humor, don’t judge people by their religion, color or habits, love life and your family.” – Madonna

15. “Power is being told you’re not loved and not being destroyed by it.” – Madonna

16. “I’m not going to compromise my artistic integrity.” – Madonna

17. “I am rich and famous. I have a talented and gorgeous husband and two beautiful children. I could go on.” – Madonna

20. “I laugh at myself. I don’t take myself completely seriously. I think that’s another quality that people have to hold on to… you have to laugh, especially at yourself.” – Madonna 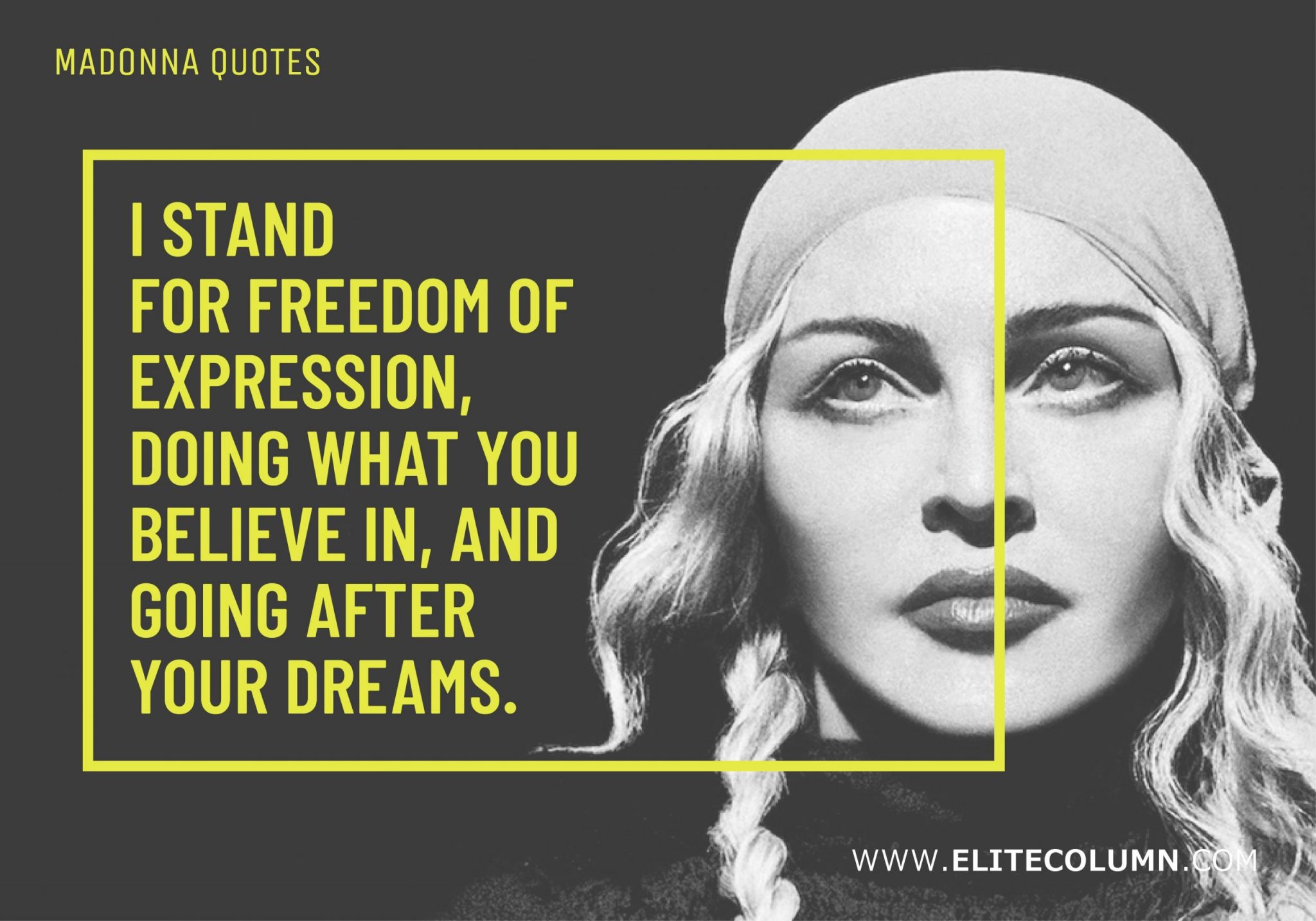 21. “I stand for freedom of expression, doing what you believe in, and going after your dreams.” – Madonna

22. “I wouldn’t have turned out the way I was if I didn’t have all those old-fashioned values to rebel against.” – Madonna

24. “In the blink of an eye everything can change! Why waste time?” – Madonna 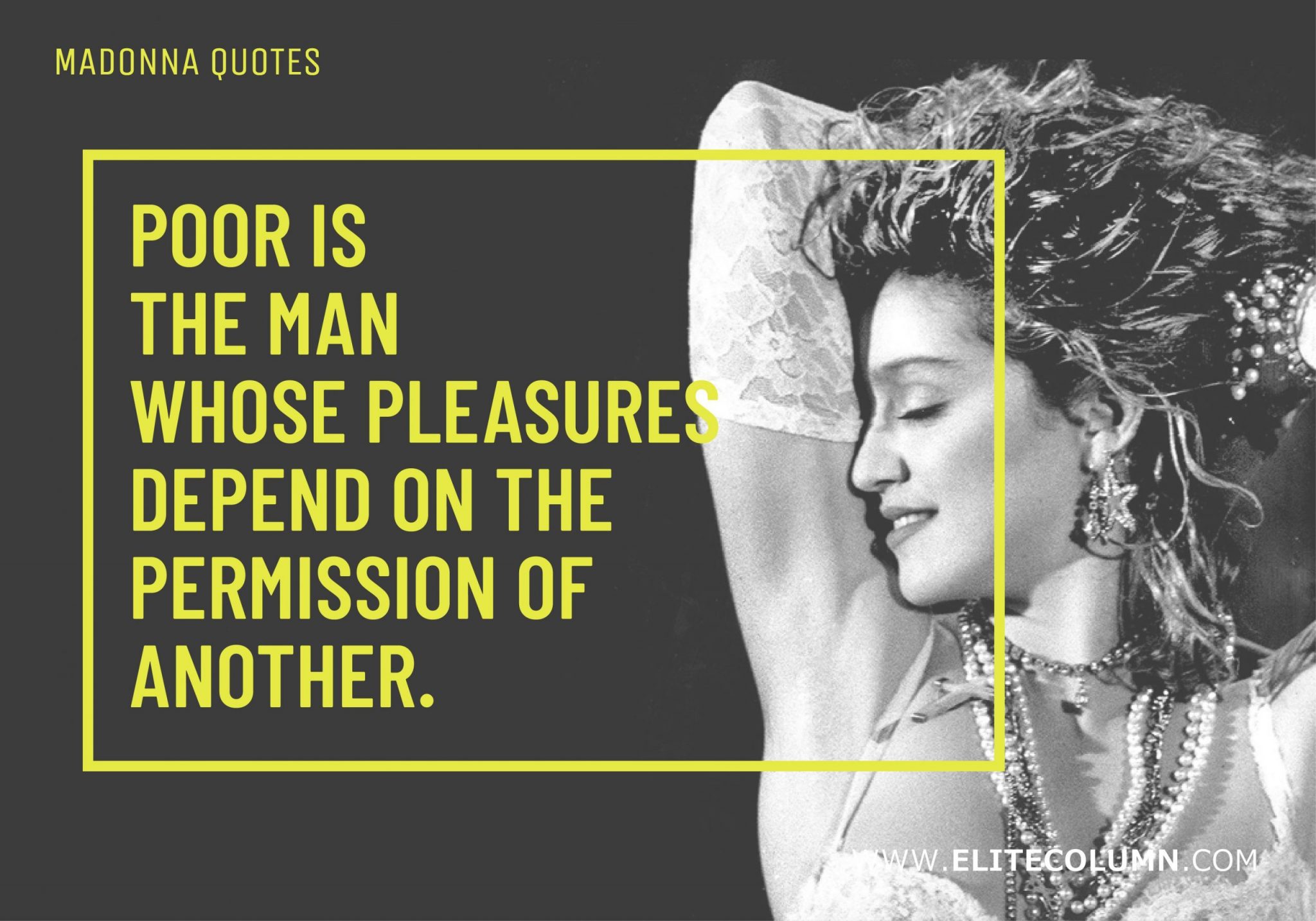 25. “Poor is the man whose pleasures depend on the permission of another.” – Madonna

27. “We all fall to the floor at some point. It’s how you pick yourself up that’s the real challenge. Isn’t it?” – Madonna

28. “I’m always looking for something new: a new inspiration, a new philosophy, a new way to look at something, new talent.” – Madonna

Thanks for checking out the best Madonna quotes. Feel free to share the quotes with your friends. Leave a comment below and which are your favorite Madonna quotes ?