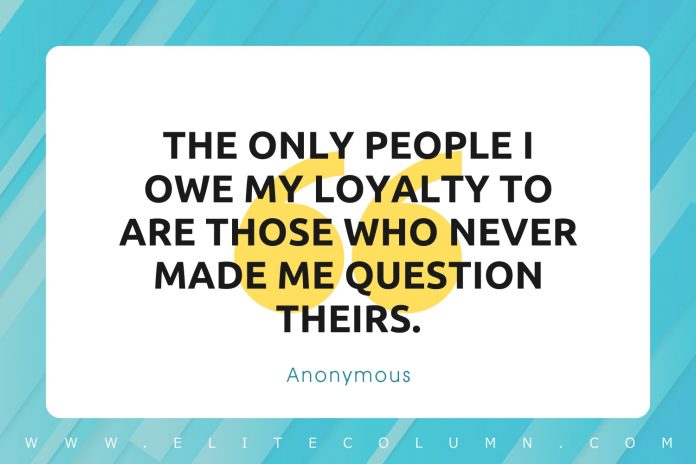 2. “The only true test of loyalty is fidelity in the face of ruin and despair.” – Eric Felten

3. “My whole thing is loyalty. Loyalty over royalty; word is bond.” – Fetty Wap

4. “Loyalty is still the same, whether it win or lose the game; true as a dial to the sun, although it be not shined upon.” – Samuel Butler

5. “What makes a woman beautiful is her loyalty to and her friendships with other women, and her honesty with men.” – Vanessa Marcil

6. “Loyalty means nothing unless it has at its heart the absolute principle of self-sacrifice.” – Woodrow T. Wilson

7. “You cannot buy loyalty; you cannot buy the devotion of hearts, minds, and souls. You have to earn these things.” – Clarence Francis

8. “The only people I owe my loyalty to are those who never made me question theirs.”  – Anonymous

17. “Loyalty that is bought with money, may be overcome by money.” – Seneca

18. “If put to the pinch, an ounce of loyalty is worth a pound of cleverness.” – Elbert Hubbard

19. “Loyalty and friendship, which is to me the same, created all the wealth that I’ve ever thought I’d have.” – Ernie Banks

20. “Loyalty is a characteristic trait. Those who have it, give it free of charge.” – Ellen J. Barrier

21. “The most valuable gift you can receive is an honest friend.” – Stephen Richards

22. “Loyalty means giving me your honest opinion, whether you think I’ll like it or not.” – General Colin Powell

23. “I don’t care a damn about men who are loyal to the people who pay them.” – Graham Greene

24. “Loyalty is a decision, a resolution of the soul.” – Pascal Mercier

26. “It isn’t an easy thing to give your loyalty to someone you don’t know.” – Megan Turner

27. “It takes a loyal gardener to tend roses.” – Sondra Fayr

28. “Can’t be loyal to everyone, it’s a conflict of interest.” – Tyconis Allison

29. “Your loyalty to friends and family should have no limit.” – Bohdi Sanders

30. “Loyalty isn’t grey. It’s black and white. You’re either loyal completely, or not loyal at all.” – Sharnay

32. “Don’t let your loyalty become slavery. If they don’t appreciate what you bring to the table, let them eat alone.” – Anonymous

33. “We owe to each other a terrible and tragic loyalty.” – G.K. Chesterson

34. “Where the battle rages, there the loyalty of the soldier is proved.” – Martin Luther

35. “You stayed because you were loyal to your family name. It is not cowardice.” – Cassandra Clara

36. “Within the hearts of men, loyalty and consideration are esteemed greater than success.” – Bryant H. McGill

39. “Honesty and loyalty are key. If two people can be honest with each other about everything, that’s probably the biggest key to success.” – Taylor Lautner

40. “A person who deserves my loyalty receives it.” – Joyce Maynard

41. “I always think loyalty’s such a tiresome virtue.” – Agatha Christie

43. “Loyalty is a fine quality, but in excess it fills political graveyards.” – Neil Kinnock

44. “You stand up for your teammates. Your loyalty is to them. You protect them through good and bad, because they’d do the same for you.” – Yogi Berra

45. “Confidentiality is a virtue of the loyal, as loyalty is the virtue of faithfulness.” – Edwin Louis Cole

46. “The test of good citizenship is loyalty to country.” – Bainbridge Colby

48. “Total loyalty is possible only when fidelity is emptied of all concrete content, from which changes of mind might naturally arise.” – Hannah Arendt

49. “Loyalty is the pledge of truth to oneself and others.” – Ada Velez-Boardley

50. “What you can’t buy is the loyalty that comes through our dedicated crewmembers.” – David Neeleman

51. “One of the things that makes me who I am is the loyalty I have to people I hold close to my heart.” – Simone Elkeles

52. “Be loyal and trustworthy. Do not befriend anyone who is lower than yourself in this regard.” – Confucius

54. “Where there is loyalty, weapons are of no use.” – Paulo Coelho

57. “If you’re not loyal to your team, you can get by for a while, but eventually you will need to rely on their loyalty to you, and it just won’t be there.” – Tim Schafer

Thanks for checking out the best Loyalty Quotes. Feel free to share the quotes with your friends. Leave a comment below and which are your favourite Loyalty Quotes ?