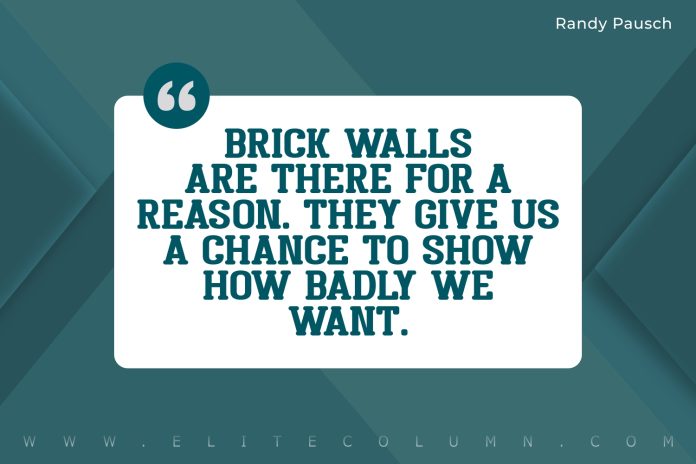 1. “All things are difficult before they are easy.” – Thomas Fuller

2. “When you are on a down swing, do not feel bad. Know the swing will change and things will get better. There are good times coming.” – Bob Proctor

3. “And so rock bottom became the solid foundation on which I rebuilt my life.” – J. K. Rowling

5. “Brick walls are there for a reason. They give us a chance to show how badly we want.” – Randy Pausch

6. “Challenges are what make life interesting and overcoming them is what makes life meaningful.” – Joshua J. Marine

7. “Life isn’t about waiting for the storm to pass, it’s about learning how to dance in the rain.” – Vivian Greene

8. “Every adversity, every failure and every heartache carries with it the seed of an equivalent or a greater benefit.” – Napoleon Hill

9. “It’s not that I’m so smart, it’s just that I stay with problems longer.” – Albert Einstein

10. “You start with a darkness to move through, but sometimes the darkness moves through you.” – Dean Young

12. “Don’t get lost in your pain, know that one day your pain will become your cure.” – Rumi

13. “Be miserable. Or motivate yourself. Whatever has to be done, it’s always your choice.” – Wayne Dyer

14. “If you want to do something that requires willpower like going for a run after work you have to conserve your willpower muscle during the day,” – Charles Duhigg

17. “It is only in our darkest hours that we may discover the true strength of the brilliant light within ourselves that can never, ever, be dimmed.” – Doe Zantamata

18. “Just think how happy you would be if you lost everything you have right now, and then got it back again.” – Frances Rodman

19. “If it’s not exactly like you thought it would be, you think it’s a failure. What about the spectrum of colors in between.” – Sara Evans

21. “Most of the important things in the world have been accomplished by people who have kept on trying when there seemed to be no hope at all.” – Dale Carnegie

22. “When you encounter obstacles, don’t turn your back on them. Face them, confront them and you will see them dissolving in front of your eyes.” – Dr Roopleen

24. “You are one decision away from a completely different life” – Mel Robbins

25. “When you come out of the storm, you won’t be the same person who walked in. That’s what this storm’s all about.” – Haruki Murakami

26. “Don’t let life discourage you; everyone who got where he is had to begin where he was.” – Richard L. Evans

29. “Our greatest glory is not in never falling, but in rising every time we fall.” – Confucius

30. “But I know, somehow, that only when it is dark enough can you see the stars.” – Martin Luther King, Jr

31. “Life’s challenges are not supposed to paralyze you; they’re supposed to help you discover who you are.” – Bernice Johnson Reagon

32. “When everything seems to be going against you, remember that the airplane takes off against the wind, not with it.” – Henry Ford

33. “The greater the difficulty, the more glory in surmounting it. Skillful pilots gain their reputation from storms and tempests.” – Epicetus

35. “If you can find a path with no obstacles, it probably doesn’t lead anywhere.” – Frank A. Clark

36. “You’re going to go through tough times – that’s life. But I say, ‘Nothing happens to you, it happens for you.’ See the positive in negative events.” – Joel Osteen

37. “have a vision, trust yourself, break some rules, ignore the naysayers, don’t be afraid to fail.” – Arnold Schwarzenegger

40. “Promise me you’ll always remember: You’re braver than you believe, and stronger than you seem, and smarter than you think.” – A.A. Milne

41. “If you don’t like your destiny, don’t accept it. Instead have the courage to change it the way you want it to be.” – Naruto Uzumaki

42. “It gets easier. Every day it gets a little easier. But you gotta do it every day, that’s the hard part.” – Jogging Baboon

43. “Sometimes it is the people who no one imagines anything of who do the things that no one can imagine.” – Alan Turing

44. “You can’t just skip ahead to where you think your life should be.” – Lily Aldrin

45. “In the middle of a difficulty lies opportunity.” – Albert Einstein

46. “The secret of life, though, is to fall seven times and to get up eight times.” – Paulo Coelho

47. “The elevator to success is out of order. You’ll have to use the stairs, one step at a time.” – Joe Girard

48. “Hope is important because it can make the present moment less difficult to bear. If we believe that tomorrow will be better, we can bear a hardship today.” – Thich Nhat Hanh

49. “If you are a fighter You are gonna lose some fights But what did you learn?” – Andy Frisella

50. “Night is always darker before the dawn and life is the same, the hard times will pass, everything will get better and sun will shine brighter then ever.” – Ernest Hemingway