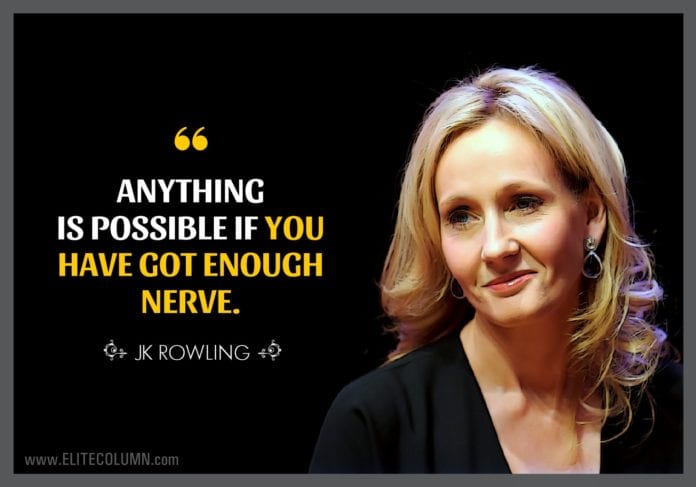 J K Rowling today can be considered as one of the most loved yet unconventional youth icons of this millennium. At one point in her life, she was a broke, divorced, single mother living on government subsidy. But only because she stuck to her passion for writing, she has become the exceptional rags to riches story of the century. JK Rowling quotes will help your conquer yourself and will provide you the courage to go after your dreams & face the struggles without any fear. 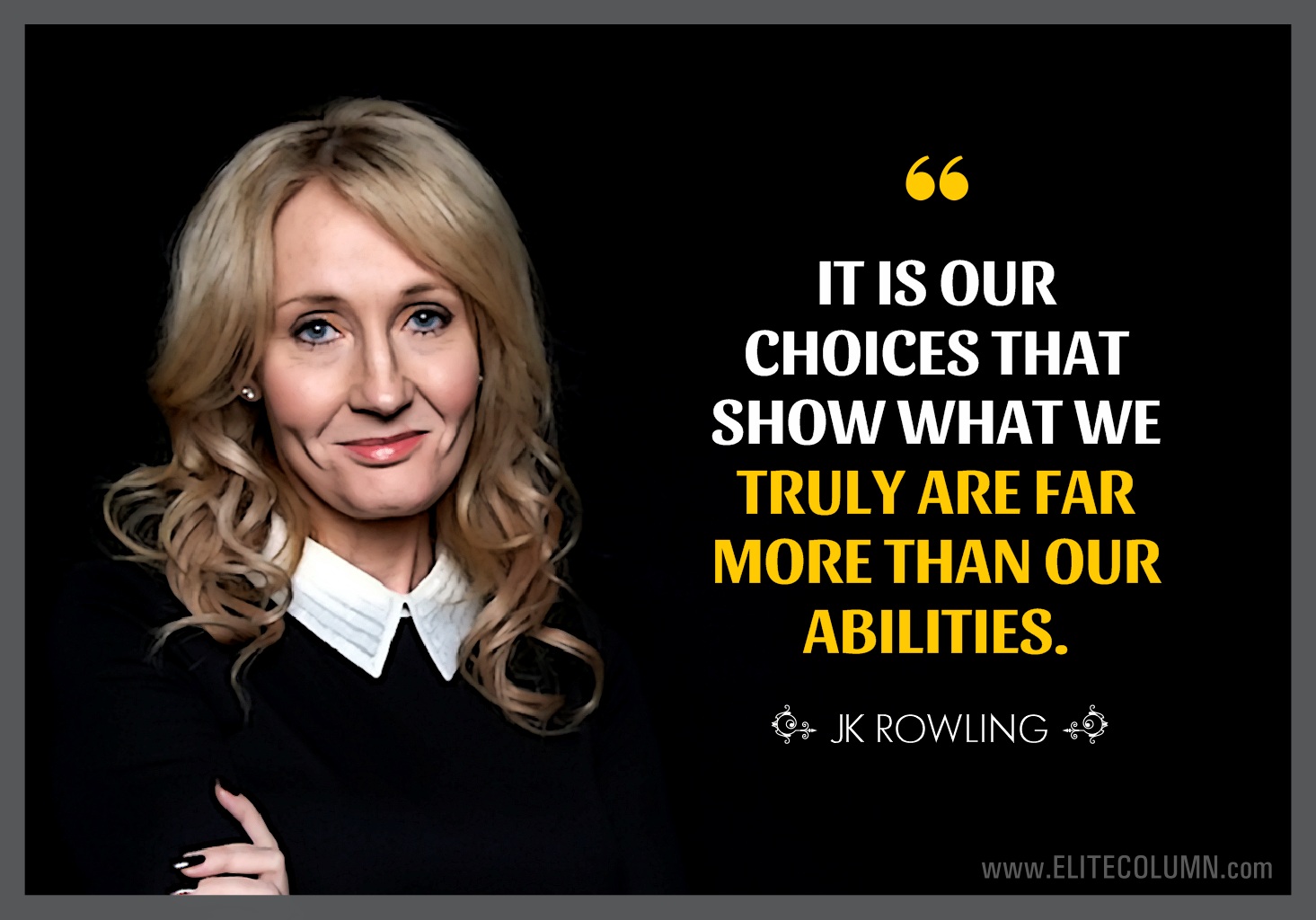 2. “Life is difficult, and complicated, and beyond anyone’s total control, and the humility to know that will enable you to survive its vicissitudes.” – J.K. Rowling

3. “Secretly we’re all a little more absurd than we make ourselves out to be.” – J.K. Rowling

4. “I have never been remotely ashamed of having been depressed. Never. What’s to be ashamed of ? I went through a really rough time and I am quite proud that I got out of that.” – J.K. Rowling 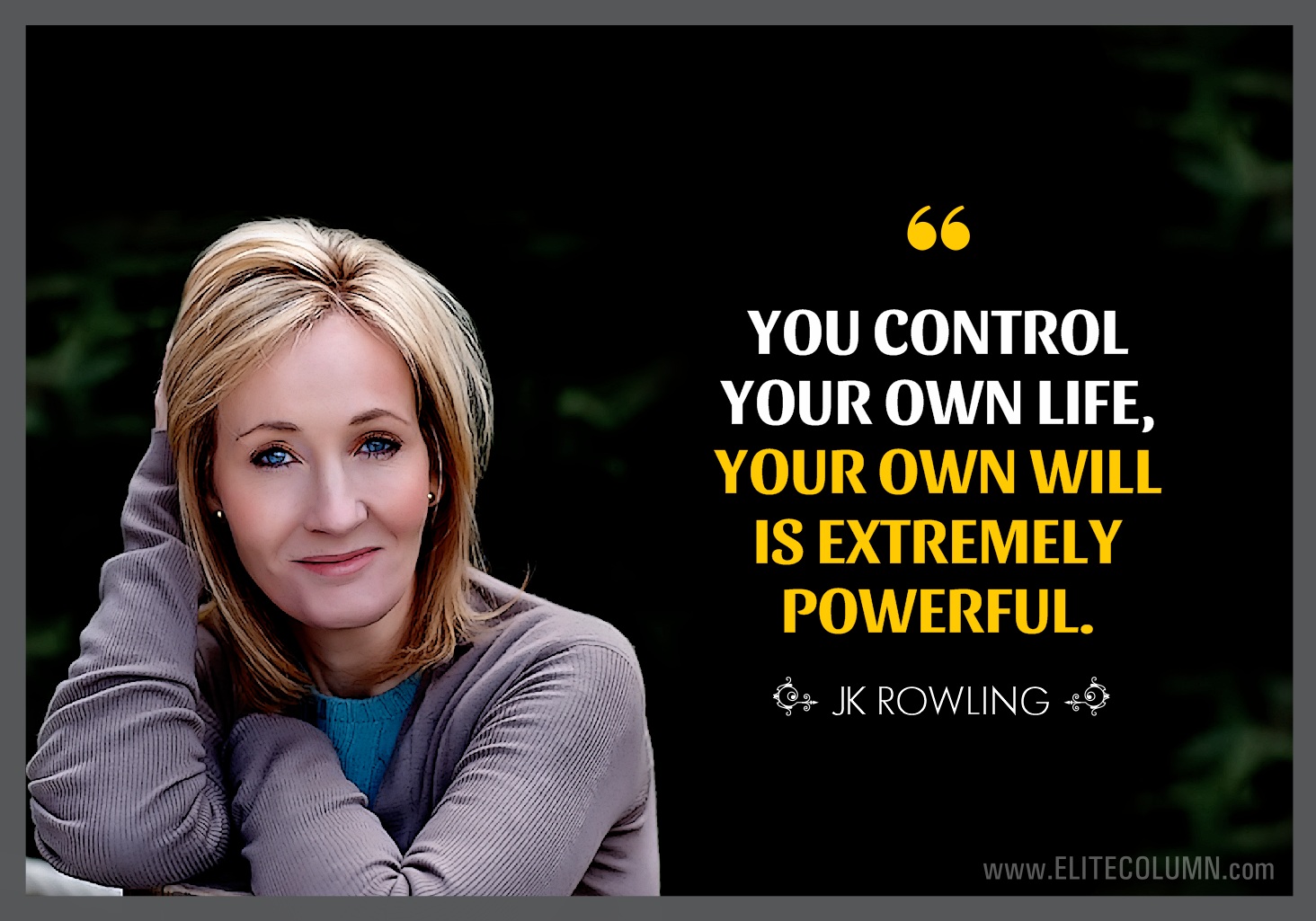 5. “You control your own life, your own will is extremely powerful.” – JK Rowling

6. “Happiness can be found, even in the darkest of times, if one only remembers to turn on the light.“ – J.K. Rowling

8. “You will never truly know yourself, or the strength of your relationships, until both have been tested by adversity.” – J.K. Rowling 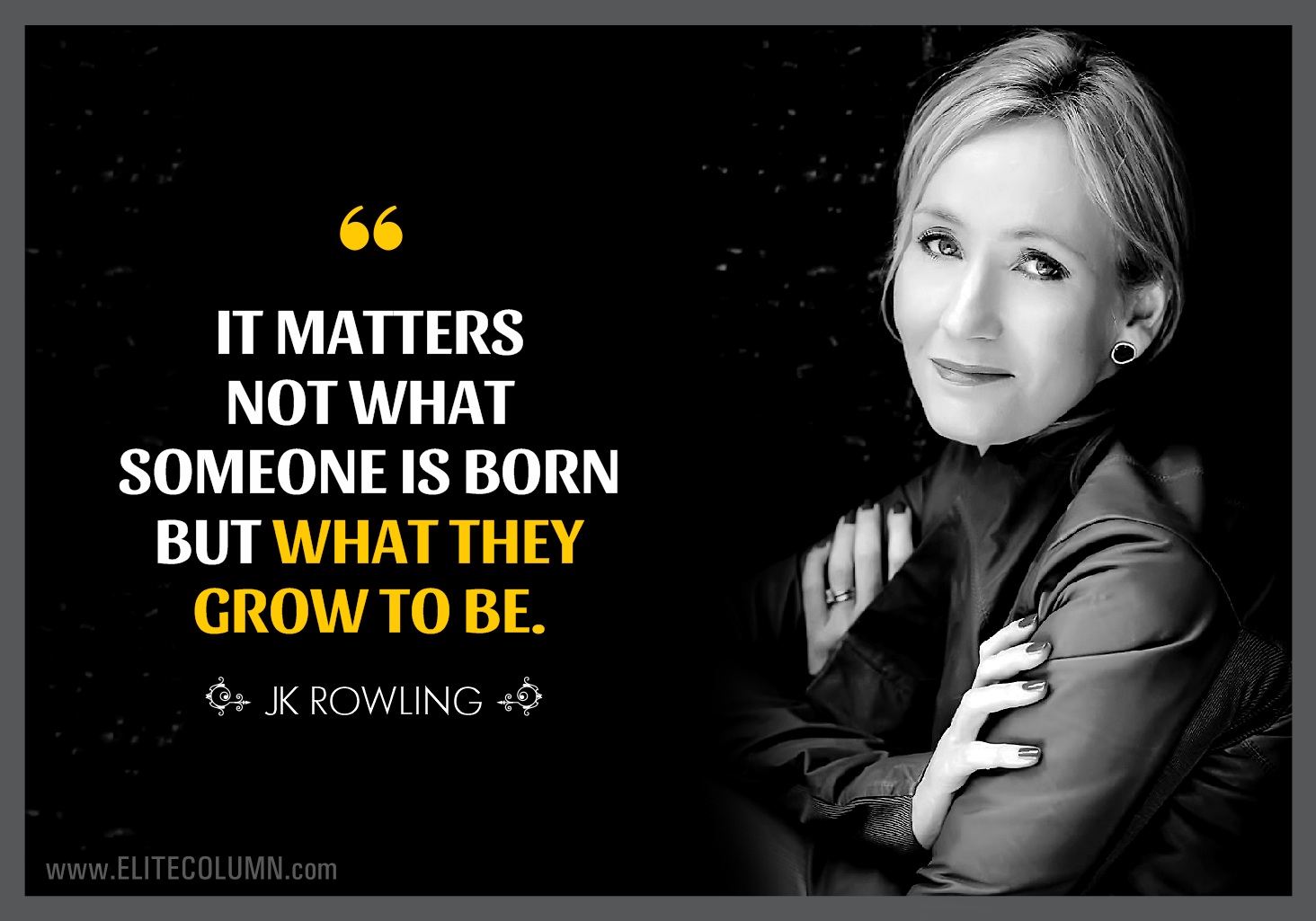 9. “It matters not what someone is born but what they grow to be.” – JK Rowling

12. “Whatever money you might have, self-worth really lies in finding out what you do best.” – J.K. Rowling 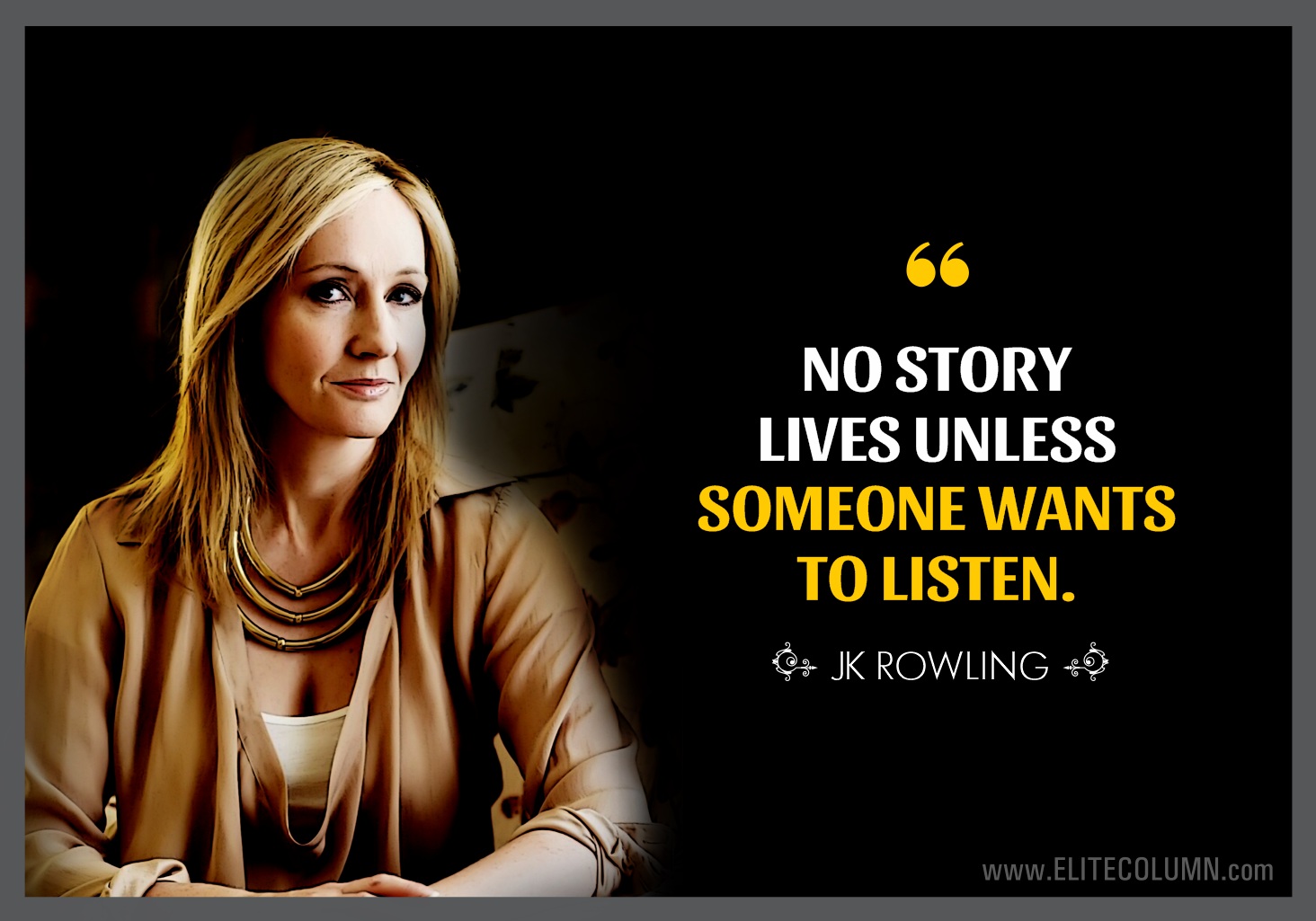 13. “No story lives unless someone wants to listen.” – JK Rowling

14. “It is impossible to live without failing at something, unless you live so cautiously that you might as well not have lived at all – in which case, you fail by default.” – J.K. Rowling

15. “We do not need magic to change the world, we carry all the power we need inside ourselves already: we have the power to imagine better.” – J.K. Rowling

16. “I don’t think there’s any harm at all in allowing a kid to fantasize. In fact, I think to stop people from fantasizing is a very destructive thing indeed.” – J.K. Rowling 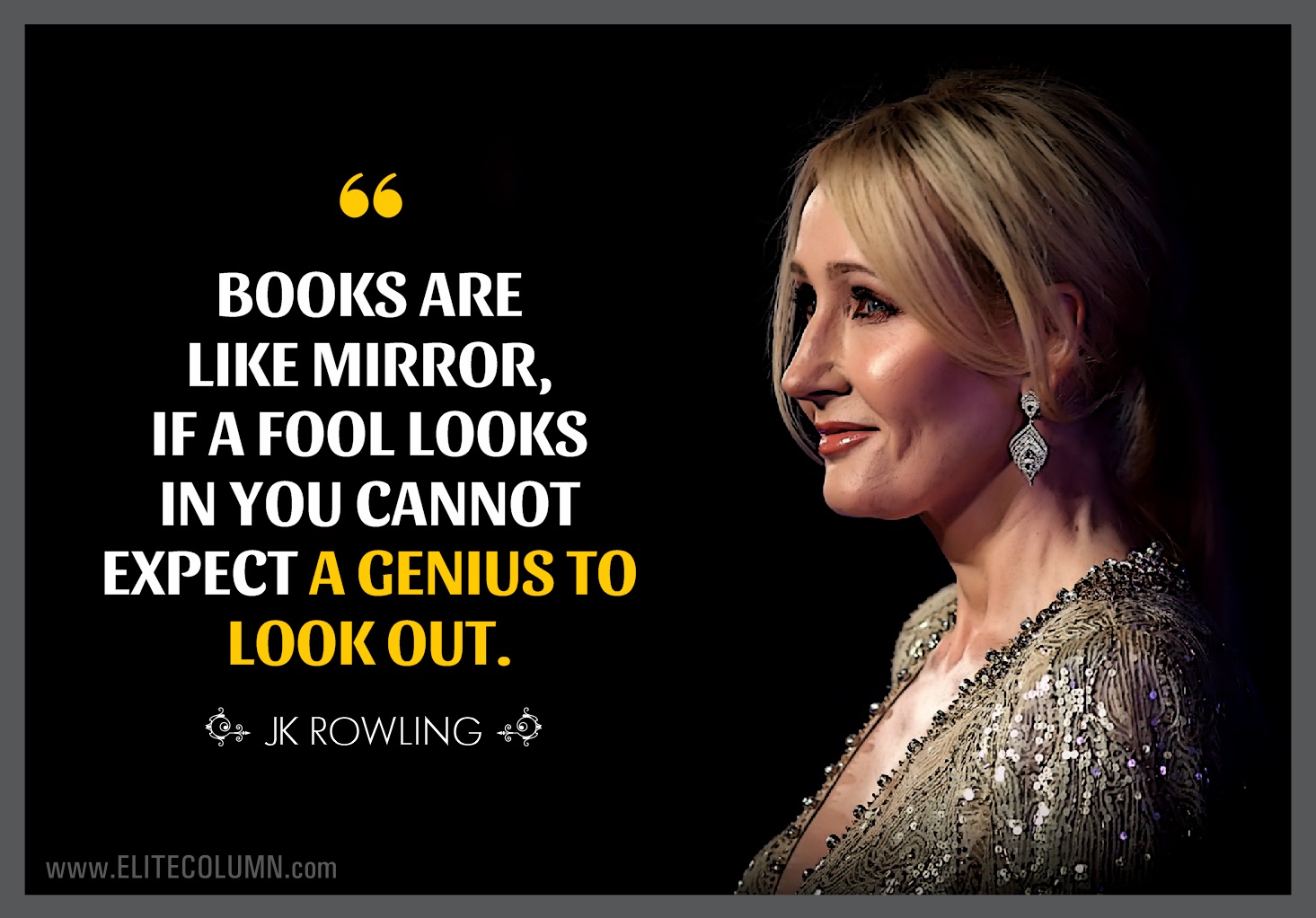 17. “Books are like mirror, if a fool looks in, you cannot expect a genius to look out.” – JK Rowling

19. “I find that discussing an idea out loud is often the way to kill it stone dead.” – J.K. Rowling

20. “Achievable goals are the first step to self-improvement.” – J.K. Rowling 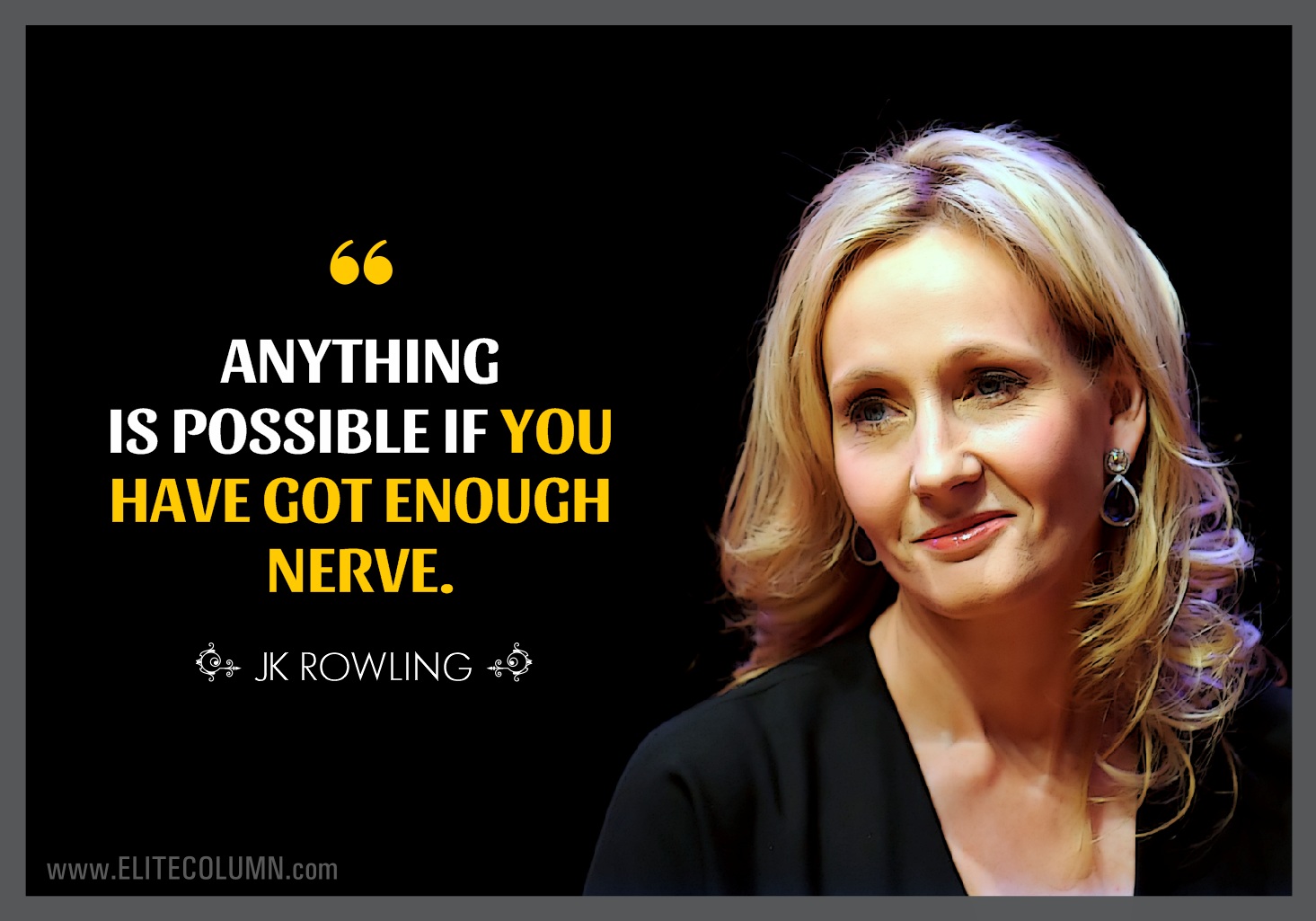 21. “Anything is possible if you have got enough nerve.” – JK Rowling

22. “If you want to know what a man’s like, take a good look at how he treats his inferiors, not his equals.” – J.K. Rowling

23. “Youth cannot know how age thinks and feels. But old men are guilty if they forget what it was to be young.” – J.K. Rowling

24. “Imagination is the foundation of all invention and innovation.” – J.K. Rowling 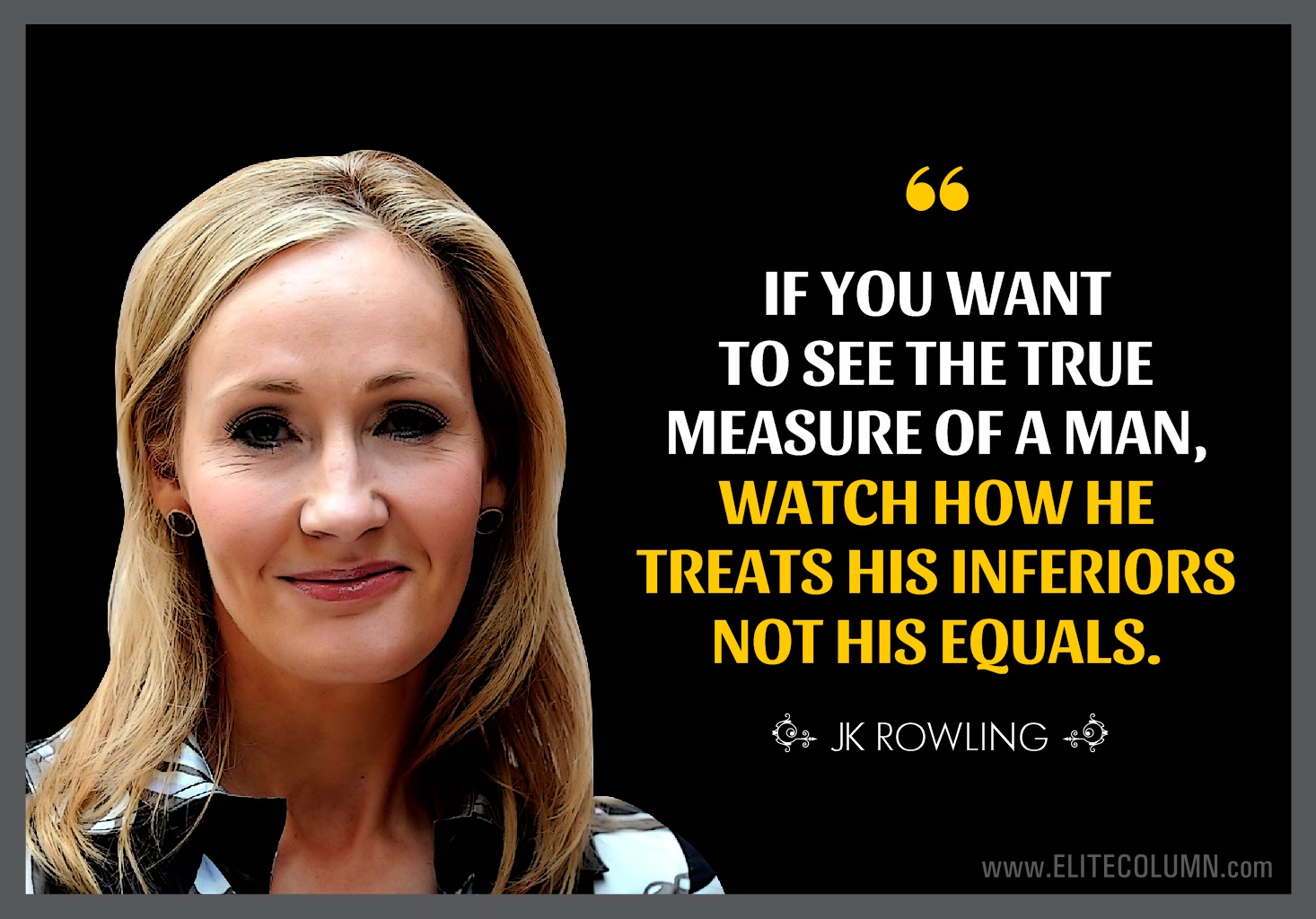 25. “If you want to see the true measure of a man, watch how he treats his inferiors not his equals.” – JK Rowling

26. “Sometimes, you have to stop trying to force it, walk away and let your subconscious show you the way. Fill up on life for a while.” – J.K. Rowling

28. “Differences of habit and language are nothing at all if our aims are identical and our hearts are open.” – J.K. Rowling 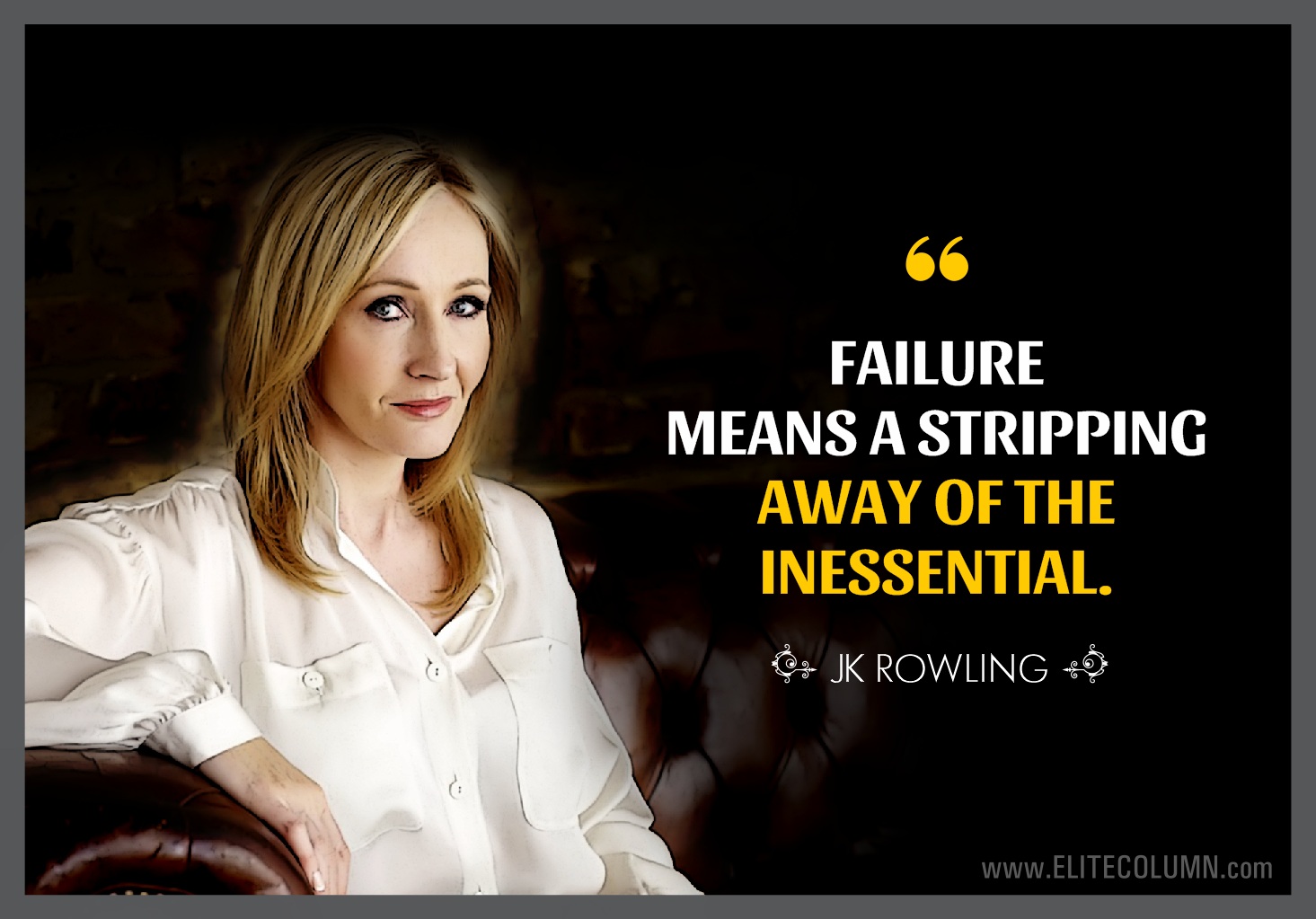 29. “Failure means a stripping away of the inessential.” – JK Rowling

31. “I would like to be remembered as someone who did the best she could with the talent she had.” – J.K. Rowling

32. “Destiny is a name often given in retrospect to choices that had dramatic consequences.” – J.K. Rowling 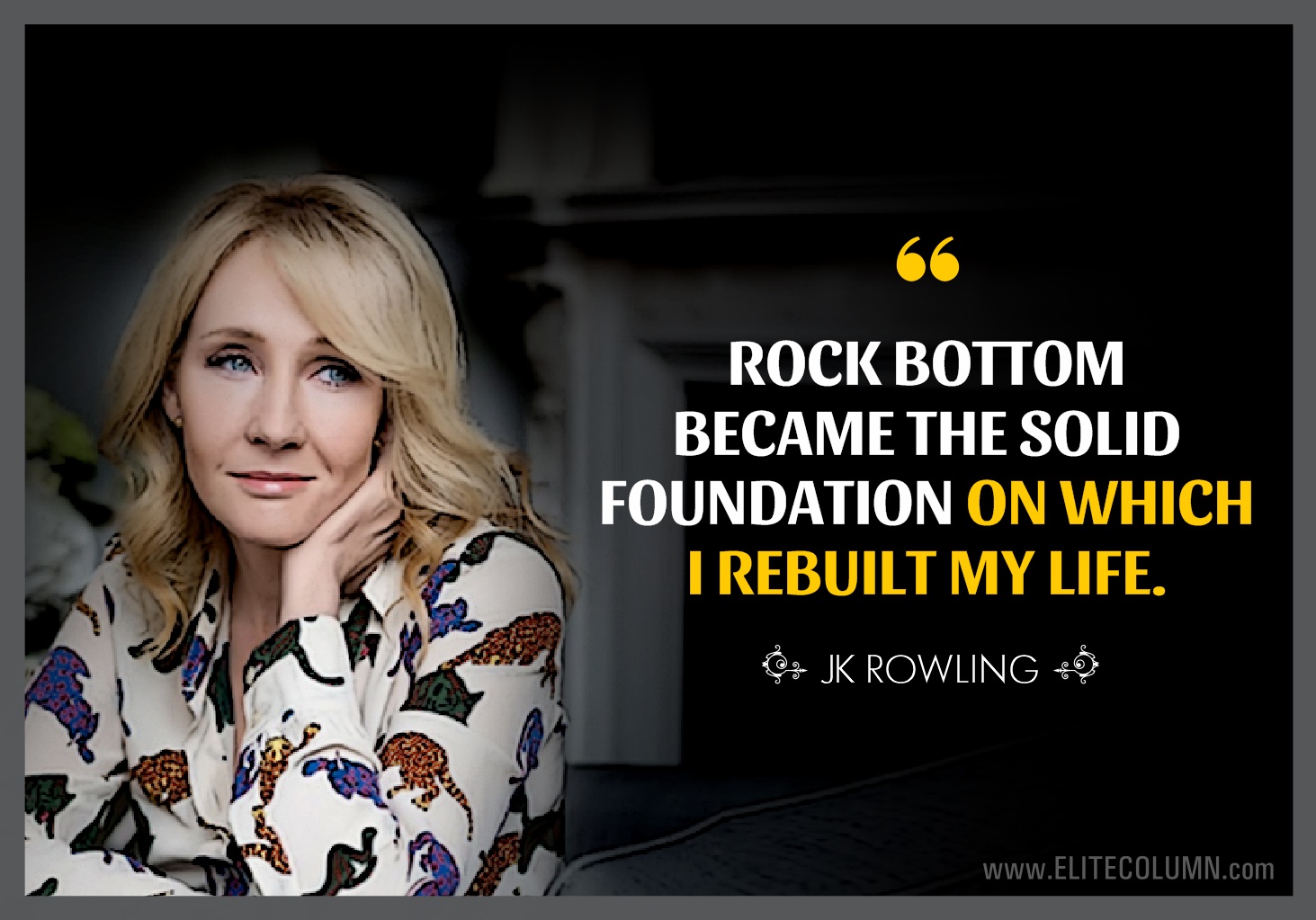 33. “Rock bottom became the solid foundation on which I rebuilt my life.” – JK Rowling

34. “The knowledge that you have emerged wiser and stronger from setbacks means that you are, ever after, secure in your ability to survive.” – J.K. Rowling

35. “The world is full of wonderful things you haven’t seen yet. Don’t ever give up on the chance of seeing them.” – J.K. Rowling 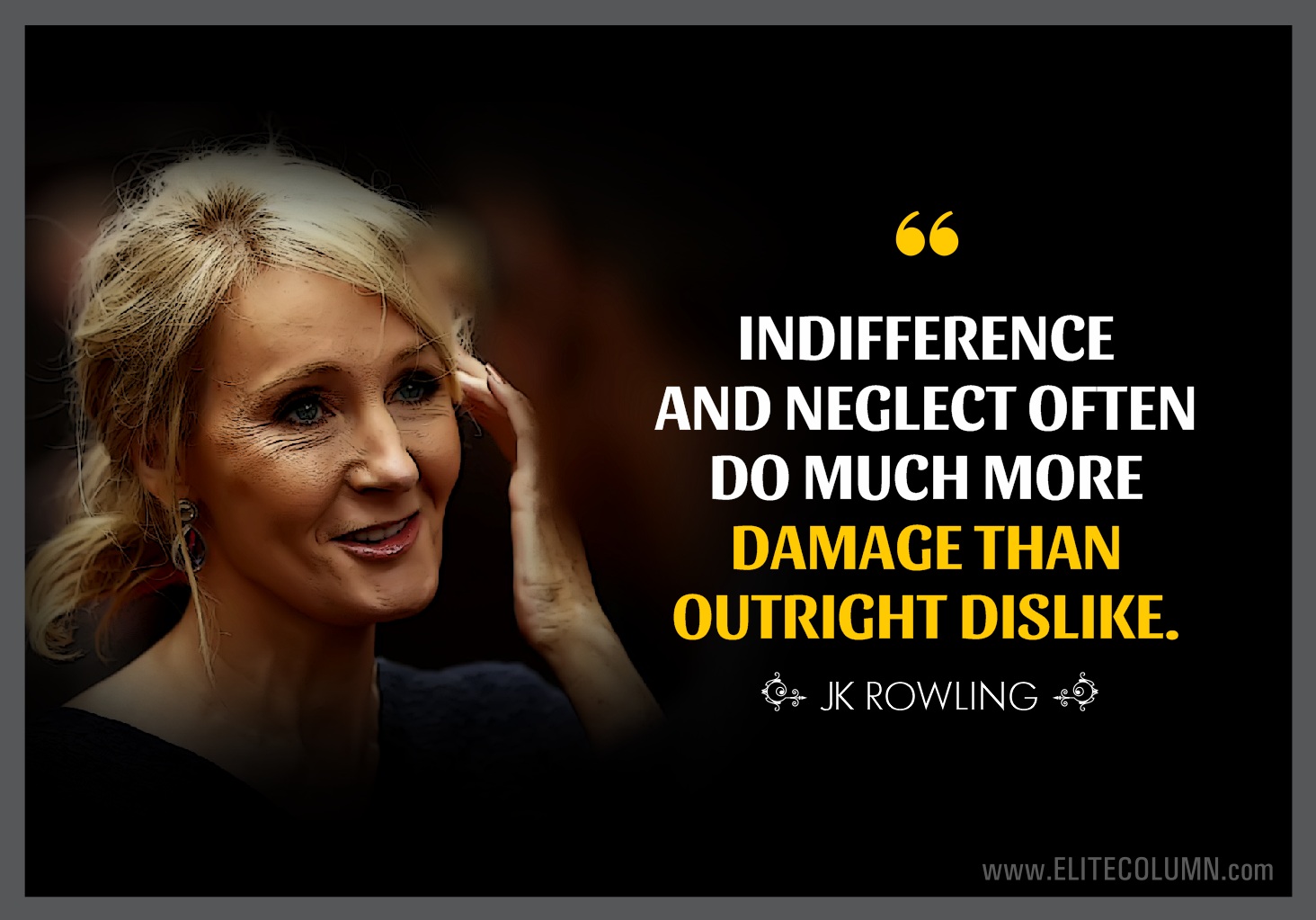 36. “Indifference and neglect often do much more damage than outright dislike.” – JK Rowling

37. “Never trust anything that can think for itself if you can’t see where it keep its brain.” – J.K. Rowling

38. “What’s most important in a friendship ? Tolerance and loyalty.” – J.K. Rowling