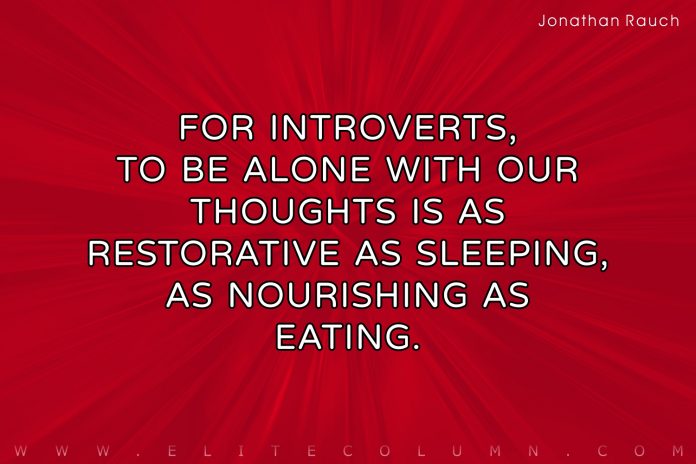 1. “After an hour or two of being socially on, we introverts need to turn off and recharge. This isn’t antisocial. It isn’t a sign of depression.” – Jonathan Rauch

2. “Your solitude will be a support and a home for you, even in the midst of very unfamiliar circumstances, and from it you will find all your paths.” – Rainer Maria Rilke

3. “The secret to life is to put yourself in the right lighting. For some it’s a Broadway spotlight, for others, a lamplit desk.” – Susan Cain

4. “As a child I suppose I was not quite normal. My happiest times were when I was left alone in the house on a Saturday.” – Charles Bukowski

6. “For introverts, to be alone with our thoughts is as restorative as sleeping, as nourishing as eating.” – Jonathan Rauch

7. “Beware of those who seek constant crowds; they are nothing alone.” – Charles Bukowski

8. “Telling an introvert to go to a party is like telling a saint to go to Hell.” – Criss Jami

9. “Solitude matters, and for some people, it’s the air they breathe” – Susan Cain

10. “Whatever kind of introvert you are, some people will find you ‘too much’ in some ways and ‘not enough’ in others.” – Laurie Helgoe

11. “I am rarely bored alone; I am often bored in groups and crowds.” – Laurie Helgoe

12. “I have to be alone very often. I’d be quite happy if I spent from Saturday night until Monday morning alone in my apartment. That’s how I refuel.” – Audrey Hepburn

13. “In order to be open to creativity, one must have the capacity for constructive use of solitude. One must overcome the fear of being alone.” – Rollo May

14. “What if you love knowledge for its own sake, not necessarily as a blueprint to action? What if you wish there were more, not fewer reflective types in the world.” – Susan Cain

16. “I am a minimalist. I like saying the most with the least.” – Bob Newhart

17. “The highest form of love is to be the protector of another person’s solitude.” – Rainer Maria Rilke

18. “When you’re an introvert like me and you’ve been lonely for a while, and then you find someone who understands you, you become really attached to them. It’s a real release.” – Lana Del Rey

19. “Introvert conversations are like jazz. Each player gets to solo for a nice stretch before the other player comes in and does his solo.” – Laurie Helgoe

20. “Our culture made a virtue of living only as extroverts. We discouraged the inner journey, the quest for a center. So we lost our center and have to find it again.” – Anais Nin

21. “Don’t think of introversion as something that needs to be cured…Spend your free time the way you like, not the way you think you’re supposed to.” – Susan Cain

23. “Solitude has its own very strange beauty to it.” – Liv Tyler

25. “Introverts dislike small talk, but we are fluent in the language of ideas and dreams.”  – Michaela Chung

26. “Better to keep quiet and let people think you’re an idiot than speak up and confirm it.” – Rodney Dangerfield

27. “I think I’m a weird combination of deeply introverted and very daring. I can feel both those things working.” – Helen Hunt

29. “There are times I wish I was a master magician so I could disappear into the folds of time.” – Jaeda DeWalt

30. “My idea of a fun night was diving into a massive pile of To Be Read books stacked near my dresser.” – Jeff Sampson

31. “Introverts treasure the close relationships they have stretched so much to make.” – Adam S. McHugh

33. “I will only have you if you are sweeter than my solitude.” – Warsan Shire

34. “If you’re a true introvert, other people are basically energy vampires.” – Amy Schumer

36. “A little hibernation is good for the mind.” – Michaela Chung

37. “Shyness is inherently painful; introversion is not.” – Susan Cain

41. “I need space from a world that is filled with millions of mouths that talk too much but never have anything to say.” – Kaitlin Foster

42. “I don’t hate people. I just feel better when they are not around. “ – Charles Bukowski

45. “I believe in annoyed at first sight.” – Steve Maraboli

Thanks for checking out the best Introvert Quotes. Feel free to share the quotes with your friends. Leave a comment below and which are your favourite Introvert Quotes ?