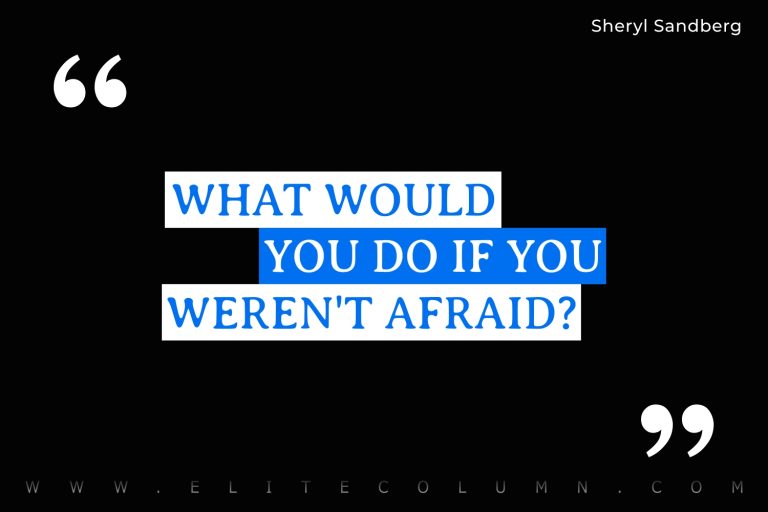 1. “All entrepreneurship really is, is coming up with an idea, and then having a lot of hustle and just doing it.” – Amy Nelson

3. “Challenges are gifts that force us to search for a new center of gravity. Don’t fight them. Just find a new way to stand.” – Oprah Winfrey

4. “What would you do if you weren’t afraid?” – Sheryl Sandberg

6. “Do not go where the path may lead. Go instead where there is no path and leave a trail.” – Ralph Waldo Emerson

7. “You gotta run more than your mouth to escape the treadmill of mediocrity. A true hustler jogs during the day and sleepwalks at night.” – Jarod Kintz

8. “Lift up the weak. Inspire the ignorant. Rescue the failures; encourage the deprived! Live to give. Don’t only hustle for survival. Go and settle for revival!” – Israelmore Ayivor

9. “If you’re not willing to risk the usual, you’ll have to settle for the ordinary.” – Jim Rohn

11. “If you want to achieve anything in life, you have to be willing to do the work. To do whatever it takes to get the job done.” – Stephanie Fleming

12. “Success is no accident. It’s hard work, perseverance, learning, studying, sacrifice, and most of all, love of what you’re doing or learning to do.” – Pele

14. “It’s not about money or connections. It’s the willingness to outwork and outlearn everyone when it comes to your business.” – Mark Cuban

15. “If you don’t value your time, neither will others. Stop giving away your time and talents. Value what you know and start charging for it.” – Kim Garst

17. “It is better to fail in originality than to succeed in imitation.” – Herman Melville

18. “Success is not final; failure is not fatal. It is the courage to continue that counts.” – Winston Churchill

20. “Good things happen to those who hustle.” – Chuck Noll

21. “The struggle you’re in today is developing the strength you need for tomorrow. Don’t give up.” – Robert Tew

23. “Focused. I’m a hustler. And my hustle is trying to figure out the best ways to do what I like without having to do much else.” – Mos Def

25. “I had to hustle to get what I wanted, but I had that hunger for more. I didn’t always make the right choices, but I learned from my mistakes.” – Curtis Jackson

26. “Everyone is where they are at because they worked hard for it. Don’t ever hate on someone’s hustle. Just figure out how you can get there.” – Jo Koy

27. “A lot of people hustle differently, and I was like, ‘You know what, let me hustle and create, and let me have something to show,’ ‘cuz my hustle led to opportunity.” – Yvonne Orji

28. “Mine’s a pretty simple strategy: There’s not a lot of talent here, but there’s a lot of hustle. I have to be in every place I can and be busy.” – Ryan Seacrest

29. “My hustle is nonstop. I never stop hustling.” – Young Jeezy

30. “I never wanted to take the easy way, and I was always willing to hustle.” – Bebe Rexha

31. “Having the positive belief that it will all be OK just means that you hustle and make it work because failure isn’t even an option in your own mind.” – Natalie Massenet

32. “You have to struggle a bit, hustle a little, and be willing to go bankrupt. Once you’re willing to do that, everything opens up and you get that freedom.” – Nick Nolte

33. “Don’t think about making art. Just get it done. Let everyone else decide if it’s good or bad, whether they love it or hate it. While they’re deciding, make even more.” – Andy Warhol

35. “Whatever your hustle is, go somewhere with it.” – Tionne Watkins

36. “Hustle is simple—it’s doing the work. A lot of people like to talk about it; a lot of people have ideas, but it’s difficult to actually do the work.” – Troy Carter

37. “What you lack in talent can be made up with desire, hustle, and giving 110 percent all the time.” – Don Zimmer

38. “You can’t have a million-dollar dream with a minimum wage work ethic.” – Stephen C. Hogan

39. “Hustle like you’re broke and keep that passion.” – Jay Rock

40. “There’s a difference between fake hustle for show and being someone who tries hard to win.” – Manny Machado

41. “All the so-called ‘secrets of success’ will not work unless you do.” – Jaymin Shah

42. “I find that the harder I work, the more luck I seem to have.” – Thomas Jefferson

43. “I never dreamed about success I worked for it.” – Estee Lauder

44. “All our dreams can come true if we have the courage to pursue them.” – Walt Disney

45. “A real entrepreneur is somebody who has no safety net underneath them.” – Henry Kravis

46. “Without hard work, nothing grows but weeds.” – Gordon B. Hinckley

47. “Inspiration is the windfall from hard work and focus.” – Helen Hanson

48. “Success is walking from failure to failure with no loss of enthusiasm.” – Winston Churchill

49. “The distance between insanity and genius is measured only by success.” – Bruce Feirstein

Thanks for checking out the best Hustle Quotes. Feel free to share the quotes with your friends. Leave a comment below and which are your favourite Hustle Quotes ?