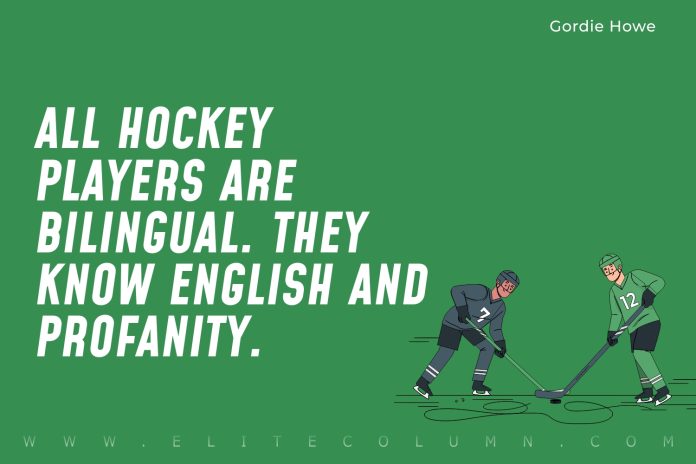 2.”I wasn’t naturally gifted in terms of size and speed everything I did in hockey I worked for, and that’s the way I’ll be as a coach.” – Wayne Gretzky

3.”I’m happiest when I have skates on my feet, a stick in my hands and teammates by my side.” – Carrie S. Allen

5.”Half the game is mental the other half is being mental.” – Jim McKenny

6.”All hockey players are bilingual. They know English and profanity.” – Gordie Howe

7. “Playing goal is like being shot at.” – Jacques Plante

8.”I am for hockey. I find I should like to hit something with a stick.” – Gemma Doyle Trilogy

9.”We get nose jobs all the time in the NHL, and we don’t even have to go to the hospital.” – Brad Park

12.”I get a feeling about where a teammate is going to be. A lot of times, I can turn and pass without even looking.” – Wayne Gretzky

13.”Field hockey is my strongest sport, and if I lose a game, I take a long, hot bath and moan about it.” – Emma Watson

14.”The English play hockey in any weather. Thunder, lightning, plague of locusts nothing can stop the hockey. Do not fight the hockey, for the hockey will win.” – Maureen Johnson

15.”My teeth weren’t that good to begin with, so hopefully I can get some better ones.” – Duncan Keith

17.”Hockey is a unique sport in the sense that you need each and every guy helping each other and pulling in the same direction to be successful.” – Wayne Gretzky

18.”Hockey has given me everything, most importantly it brought me to Swift Current, where I met my wife Deb.” – Joe Sakic

19.”Only one thing is ever guaranteed, that is that you will definitely not achieve the goal if you don’t take the shot.” – Wayne Gretzky

21.”Every day is a great day for hockey.” – Mario Lemieux

22.”To me, hockey was always tremendous fun. That’s what kept me going for so long. I simply love to play hockey.” – Gordie Howe

23.”Nobody’s a natural. You work hard to get good and then work to get better. It’s hard to stay on top.” – Paul Coffey

24.”Simple philosophy: be on time, come to the rink ready to play. And we pretty much did that all the time and pretty much learned as we went.” – Paul Coffey

25. “You only reach the hockey goals you aim at. Therefore, you might as well aim at reaching your ultimate hockey goals.” – Felicity Luckey

26.”Hockey is not a one man show it’s a team effort. If you don’t work as a team even if one or two guys aren’t working you’re not going to win. That’s the way it is.” – Guy Lafleur

27.”It’s more fun to be playing hockey than doing anything else.” – Connor McDavid

28. “Hockey, honestly, was my first love. The excitement, the fast pace, the intensity of the game I still love it to this day.” – J. J. Watt

29.”Hockey is a tough, physical game, and it always should be.” – Mario Lemieux

31.”You were born to be a player. You were meant to be here. This moment is yours.” – Herb Brooks

32. “I think the big thing is you really have one chance to do this to play hockey for a living, you have one chance at your career, and you have to take full advantage of it.” – Patrick Kane

33.”You don’t have enough talent to win on talent alone.” – Herb Brooks

34. “If you’re a sports fan, it is really cool when you see the best-on-best for hockey at the Olympics.” – Gary Bettman

35.”Risk something or forever sit with your dreams.” – Herb Brooks

37.”It’s not necessarily the amount of time you spend at practice that counts it’s what you put into the practice.” – Eric Lindros

38.”The goal is too small and the goalies are too big.” – Scotty Bowman

39.”To succeed in hockey, you need teamwork.” – Henry Samueli

40.”Hockey’s a funny game. You have to prove yourself every shift, every game. It’s not up to anybody else. You have to take pride in yourself.” – Paul Coffey

41.”I found out that if you are going to win games, you had better be ready to adapt.” – Scotty Bowman

42.”Positive expectations are important for your hockey success because you tend to get what you expect.” – Felicity Luckey

44.”Discipline is the bridge between your hockey goals and hockey success.” – Felicity Luckey

46.”A player must be able to skate, have hockey sense, be able to shoot not necessarily able to score and have drive.” – Pierre Page

48.”A puck is a hard rubber disc that hockey players strike when they can’t hit one another.” – Jimmy Cannon

Thanks for checking out the best Hockey Quotes. Feel free to share the quotes with your friends. Leave a comment below and which are your favourite Hockey Quotes ?