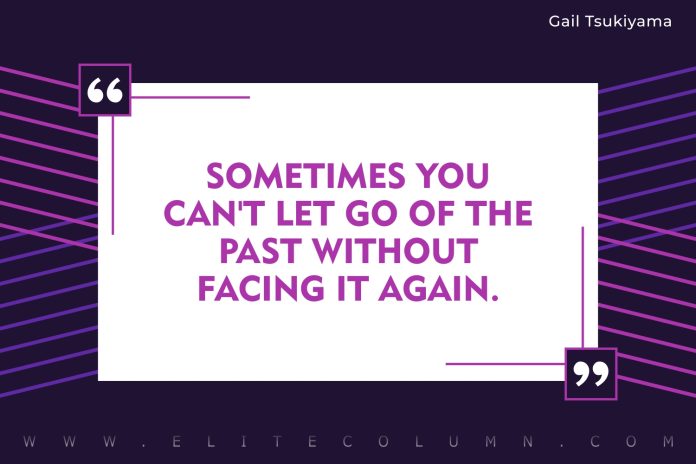 Check out 50 Get Over It Quotes today.

50 Best Get Over It Quotes

1. “Sometimes it takes a heartbreak to shake us awake & help us see we are worth so much more than we’re settling for.” – Mandy Hale

2. “You really don’t have to burn any bridges to let go You don’t have to destroy anything. You can just decide to cross over and move on.” – Marta Mrotek

3. “You can’t expect to move forward if your emergency break is on.” – Angela Cecilia

4. “Sometimes you can’t let go of the past without facing it again.” – Gail Tsukiyama

5. “Letting go doesn’t mean that you don’t care about someone anymore. It’s just realizing that the only person you really have control over is yourself.” – Deborah Reber

6. “Nothing in the universe can stop you from letting go and starting over.” – Guy Finley

7. “I demolish my bridges behind me then there is no choice but to move forward.” – Fridtjof Nansen

8. “We must be willing to let go of the life we’ve planned, so as to have the life that is waiting for us.” – Joseph Campbell

9. “Courage is the power to let go of the familiar.” – Raymond Lindquist

12. “Once you realize you deserve a bright future, letting go of your dark past is the best choice you will ever make.” – Roy T. Bennett

14. “At some point, you gotta let go, and sit still, and allow contentment to come to you.” – Elizabeth Gilbert

15. “Rehashing the past wouldn’t change anything. Time to move forward.” – Zena Wynn

17. “Yesterday is not ours to recover, but tomorrow is ours to win or lose.” – Lyndon B. Johnson

18. “It is impossible to live without failing at something, unless you live so cautiously that you might as well not have lived at all, in which case you have failed by default.” – J. K. Rowling

19. “Stop acting as if life is a rehearsal. Live this day as if it were your last. The past is over and gone. The future is not guaranteed.” – Wayne Dyer

20. “The most difficult aspect of moving on is accepting that the other person already did.” – Faraaz Kazi

21. “Laughter gives us distance. It allows us to step back from an event, deal with it and then move on.” – Bob Newhart

22. “Don’t dwell on what went wrong. Instead, focus on what to do next. Spend your energy moving forward together towards an answer.” – Denis Waitley

24. “Letting go is the willingness to change your beliefs in order to bring more peace and joy into your life instead of holding onto beliefs that bring pain and suffering.” – Hal Tipper

25. “There are times in life when people must know when not to let go. Balloons are designed to teach small children this.” – Terry Pratchett

26. “If I kept saying it if I kept reaching out. My accident really taught me just one thing: the only way to go on is to go on. To say ‘I can do this’ even when you know you can’t.” – Stephen King

28. “If you truly want to be respected by people you love, you must prove to them that you can survive without them.” – Shannon L. Alder

29. “No matter how much suffering you went through, you never wanted to let go of those memories.” – Haruki Murakami

30. “Some of us think holding on makes us strong, but sometimes it is letting go.” – Hermann Hesse

31. “When one door closes, another opens but we often look so long and so regretfully upon the closed door that we do not see the one which has opened for us.” – Alexander Graham Bell

33. “Breathe. Let go. And remind yourself that this very moment is the only one you know you have for sure.” – Oprah Winfrey

34. “We need to learn to let go as easily as we grasp and we will find our hands full and our minds empty.” – Leo F. Buscaglia

35. “It is only through labor and painful effort, by grim energy and resolute courage, that we move on to better things.” – Theodore Roosevelt

36. “Your past does not equal your future.” – Anthony Robbins

37. “It’s not a matter of letting go you would if you could. Instead of “Let it go” we should probably say “Let it be” – Jon Kabat-Zinn

38. “A very wise man once told me that you can’t look back you just have to put the past behind you, and find something better in your future.” – Jodi Picoult

39. “The answer to every adversity lies in courageously moving forward with faith.” – Edmond Mbiaka

40. “Sometimes the hardest part isn’t letting go but rather learning to start over.” – Nicole Sobon

41. “Letting go may sound so simple, but rarely is it a one-time thing. Just keep letting go, until one day it’s gone for good.” – Eleanor Brownn

43. “Forget what hurt you but never forget what it taught you.” – Shannon L. Alder

44. “Make it a rule of life never to regret and never to look back. Regret is an appalling waste of energy you can’t build on it it’s only good for wallowing in.” – Katherine Mansfield

46. “To let go is to release the images and emotions, the grudges and fears, the clingings and disappointments of the past that bind our spirit.” – Jack Kornfield

48. “This is love to fly toward a secret sky, to cause a hundred veils to fall each moment. First to let go of life. Finally, to take a step without feet.” – Rumi

49. “Keeping baggage from the past will leave no room for happiness in the future.”
– Wayne L. Misner

50. ”You have to let go of who you were to become who you will be.” – Candace Bushnell